With a career in motorsport that spans nearly 40 years and includes victories in the Triple Crown of endurance racing, Scott Maxwell was taken aback when he learned of his impending induction into the Canadian Motorsport Hall of Fame.

“I was definitely very surprised when I got the phone call,” he says. “I immediately was honoured and yet felt suddenly very old.”

Maxwell is joined in the 2014 inductee class — the ceremony later this month will mark the Hall’s 20th anniversary — by Paul Tracy, Diana Carter, John Magill, and the Star’s own Norris McDonald, along with international inductee Nigel Mansell.

The announcement leaves Maxwell reflecting on a success that began early with championships in Formula Vee and Formula Ford and carried through to titles in Canadian National Showroom Stock and Grand-Am Cup.

He was on the team that won the first-ever Daytona Prototype race at the Rolex 24 Hours of Daytona in 2003, co-driving with David Brabham and fellow Canadian David Empringham. He teamed up with Brabham again and was joined by Sebastien Bourdais in claiming the GT2 class win at the 12 Hours of Sebring in 2006.

And he was the lead driver on the first and only all-Canadian team to earn a class win at the 24 Hours of Le Mans, Multimatic Motorsports, in 2000 while racing with John Graham and the late Greg Wilkins. 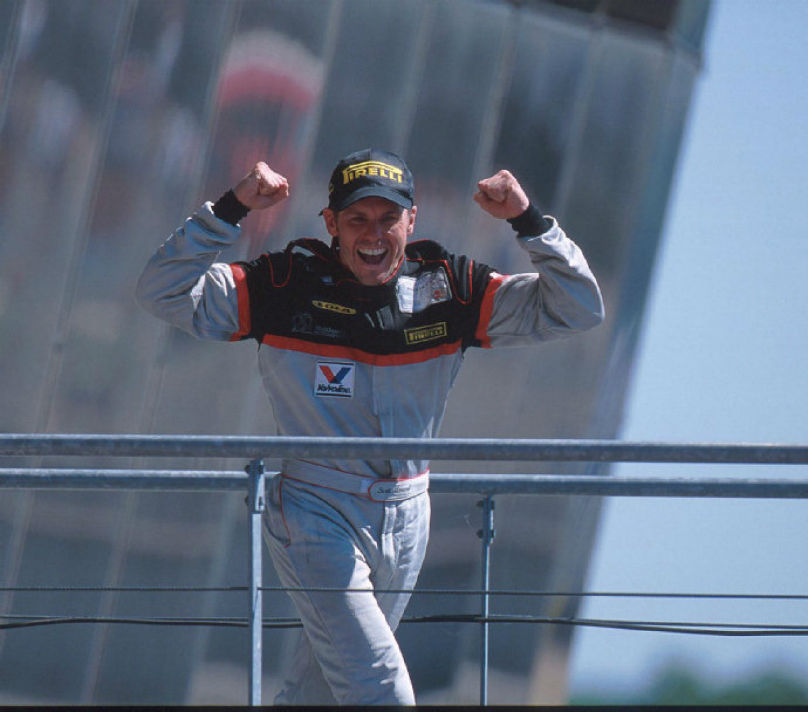 “My greatest moment personally was leading the team at Le Mans and standing on the podium there,” Maxwell says. “There’s just nothing like it.”

While he recognizes the wins at Daytona, Sebring, and Le Mans are the achievements that stand out most in his career, Maxwell has fond memories of many less prominent moments.

“We beat the factory Corvettes with the Porsche to get pole,” he recalls. “That was (Dale) Earnhardt’s last race before he was killed, unfortunately, a couple of weeks later. Ron (Fellows) was the lead driver in one (Corvette) and Earnhardt in the other.

“We were sort of like the little guy stealing some of the thunder from the factory team. That was a nice moment.”

Similar memories have been piling up since Maxwell’s first visits to the track, which came early and were numerous.

“My dad was involved in racing,” he remembers. “He was a weekend amateur racer, but he was also an official, so I was at the racetrack a disproportionate amount of time for a kid.

“I had unlimited access, especially at Mosport, to just go anywhere. I could walk into (original Mosport owner) Harvey Hudes’s office when I was eight years old. I remember meeting Graham Hill and Jack Brabham and people like that just walking around.

“For a kid to be that close to it, it couldn’t help but manifest itself in something.”

There are a number of legendary Canadian team owners who Maxwell credits as part of his success, as he climbed the ranks. These include Brian Stewart, Danny Burritt, Bill Vallis, Sean Mason, and Larry Holt, of Multimatic Motorsports.

It may also come as a surprise to some that Maxwell considers himself indebted to the man who was his fiercest rival early in his career, fellow 2014 Hall of Fame inductee Paul Tracy.

“Paul and I couldn’t stand each other when we were teenagers, because it was either him or me who was going to win,” Maxwell recalls. “We ended up crashing into each other so much.

“As soon as we stopped racing against each other, we realized we’re good friends. And without each other pushing, we probably never would have gotten to the level we did.

“We needed each other to bring the best out.”

Maxwell is still racing these days — and doing so still with Multimatic more than 20 years after its launch. He’s now driving a Ford Mustang Boss 302R in GS class in the Continental Tire Sports Car Challenge.

He’s not certain when the time will come to hang up his boots.

“Eventually, I will probably take a step back from racing, but I want to do it on my own terms,” he says. “I can still run with my teammates who are all young hot shoes. It’s the day when you wake up and go ‘I’m a second off, why is that?’ and there’s no real answer . . . that will happen one day. It’s just the natural progression. Every athlete goes through it.

When he does stop racing, Maxwell will have plenty to keep him busy. Much of his time these days is taken up with behind-the-scenes testing and simulator work.

Plus, Maxwell owns Mini Grid, a Midtown store that specializes in products for motorsport enthusiasts. It’s another of the passions he acquired from his father, who started the business in 1978.

“For a lot of people, it’s a bit of an escape,” he says of the shop. “They come in here and they’ll spend an hour just walking around and talking.

“The thing I can see five or 10 years down the road is enjoying that part of it, still seeing people and still being around the sport in a different way.”

But, now, as he plans what he’ll say to his colleagues and friends as they bestow on him one of the greatest honours in Canadian motorsport, Maxwell is passing his time contemplating things.

“It makes you think,” he says. “I’ve become very reflective all of a sudden on how (more than) 30 years of racing have flashed past. It seems like yesterday when I was just starting out.

“It’s a lot to take in. I never thought I would react that way, but it has been quite an emotional experience.”

The Canadian Motorsport Hall of Fame 20th anniversary induction ceremony will take place on Friday, Sept. 27, at the Glenn Gould Studio Theatre, 250 Front St. W., Toronto. Tickets are available to the public for $85 each and can be purchased online at cmhf.ca.