The Detroit native is heavily into performance art involving acrobatics and other arts like sketching, painting, and designing fun chocolate truffles.

On Tuesday morning, while on my way to interview the designer of Cadillac’s new XT4 crossover, I spent a good twenty minutes parked on Allen Road southbound due to construction. My mind had already been occupied with the previous day’s news that General Motors would be “unallocating” the Oshawa assembly plant in just over a year, and I couldn’t help but wonder if this event was destined to be a tad awkward.

On arrival at the Matter Gallery, the always happy Cadillac team greeted me with a smile, which prompted me to ask if there had been any thoughts to rescheduling the event. It turns out that most of the day’s participants were of the national lifestyle variety and were blissfully unaware of the connection between Cadillac and GM. Only us automotive types had an idea that something was amiss.

I was there to sit down with Therese Pinazzo, who penned the exterior design of the XT4. Away from the auto industry, the Detroit native is heavily into performance art involving acrobatics and other arts like sketching, painting, and designing fun chocolate truffles. A long time fitness buff and snowboarder, Pinazzo actually took up skateboarding at the age of 40! I always love to hear what old cars inspire a designer, so I began my questioning there.

Wheels.ca: I read that you grew up in a family that loved old cars. Do you have a toy car now?

Therese Pinazzo: “I don’t have any specialty cars, although I am a little bit obsessed with late Seventies vans, shag wagons, like the A-Team van. My husband and I are trying to sort this out, because we both want one. I also love old station wagons. I mean, when are station wagons, in North America,  going to take off? In Europe, they love them!”

TP: “There will be a tipping point, because everywhere else, outside of America, is way into them and there has to be something to replace a typical SUV or a typical minivan.”

Wheels.ca: As design types, are you guys able to work on other stuff, or is it all cars all the time?

TP: “I don’t know if you have heard of the e-bike. We have a California studio, which is a small offshoot, almost like a skunkworks and they can do whatever they want pretty much. Somebody that works there was really into bikes and started sketching bikes. Somebody else saw it and said “we should do something with this,” and it turned into this whole project about urban mobility. Now, they are about to launch them!”

Wheels.ca: Other manufacturers, say BMW, Porsche, Mercedes-Benz have all built and sold bicycles, so it really isn’t a stretch to think that a high end bike product would be unexpected branding for Cadillac.

TP: “I think for GM, the most significant thing is that we’ve decided to go with the whole zero, zero, zero thing. We’re really pulling the entire company into electric and urban mobility. Urban mobility being vague, because we can do anything. We’re trying to create a company that is elastic enough to not just do cars. We want to make sure that we’re up on the times and making sure that we’re relevant in terms of being able to move people from one place to another.” 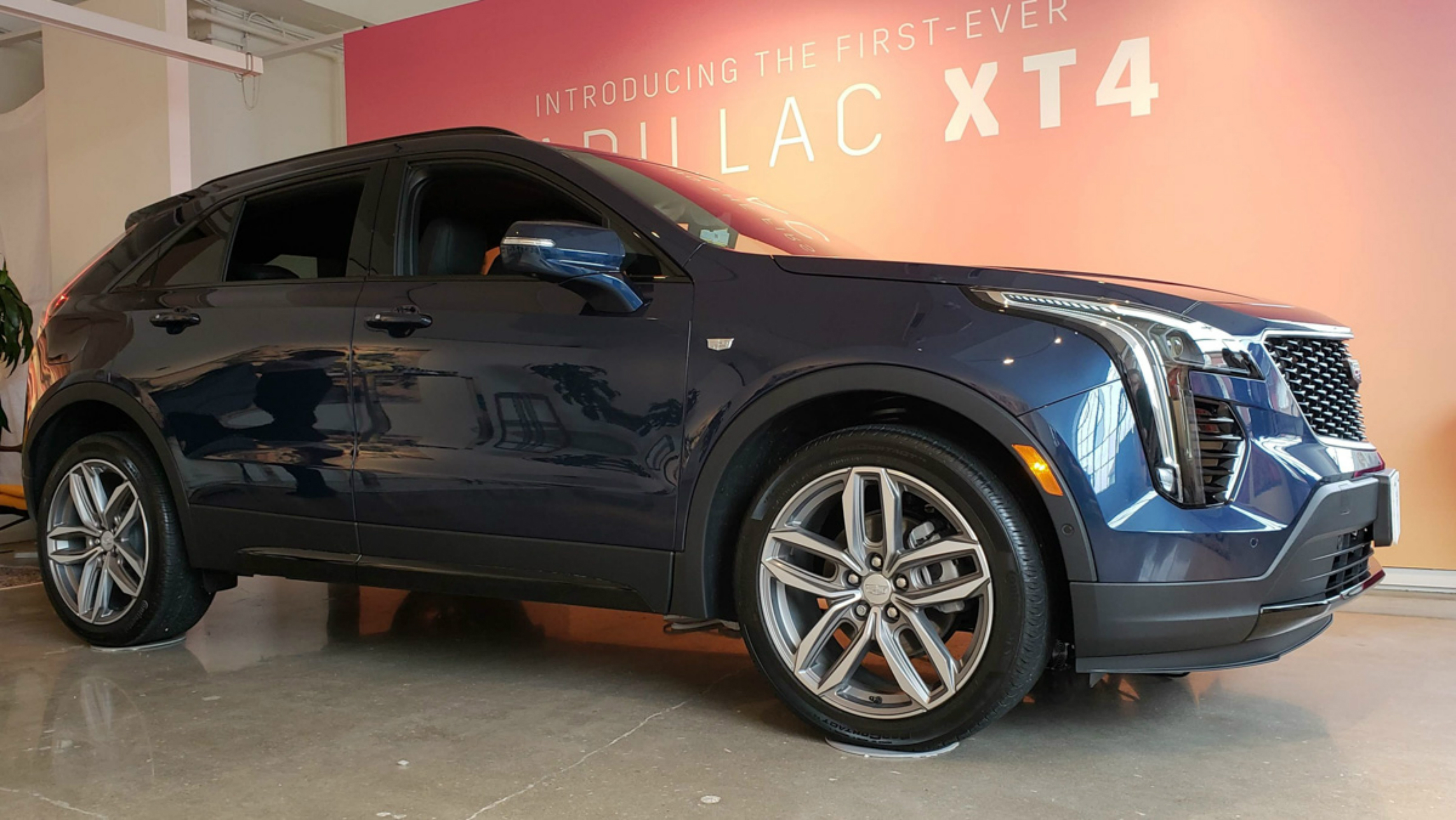 Wheels.ca: So let’s talk about this thing(pointing to the XT4).

While talking about the exterior treatment, Pinazzo continued using the term DLO. I have spent a lot of time around automobiles and designers, and yet I had never heard the term before.

TP: “DLO is Daylight Opening, so that is the piece around the opening” (as she motions along the side of the vehicle).”

Basically, a car’s DLO is the space around the side windows. On sport trim Caddies it will be a gloss black, while on the premium luxe versions it will be bright, as in some sort of metallic.

TP: “I think the most important thing to talk about (regarding the exterior design of the XT4) is the proportion. Since it is small, we were trying to consciously make it feel a little bit aggressive and planted on the road. We joked in the studio that this is an SUV that doesn’t know that its small. Like an Escalade that is trapped in a smaller body, so we tried to make it feel more powerful, even though it is small.” As an example, “the hood was inspired by the V-series, like ATS, CTS V-series, just so that it felt fresh, sporty and powerful”.

If you have been around a while, that hood bulge looks like it was inspired by a Camaro drag car.

Pinazzo is particularly proud of the LED lamps, both at the front and rear of the vehicle, which hold a few design Easter eggs, such as functional louvres at the front that allow a wrap-around headlight which is not visible to following motorists. In recent years, Cadillac tail lamps have featured a vertical string of light, which has been incorporated with a horizontal element in the XT4, in a nod to the headlamp treatment.

A lot of Cadillacs have been a bit too line oriented for Pinazzo’s liking, so the body sides have been sculpted outwards to give the feeling that the wheels have been pushed further out, giving it a more aggressive stance. To my eyes, it almost looks like a gentle wide-body kit has been applied. “We felt like it should be line based, but have sculpture integrated into the body sides” says the designer.

I might be the only automotive journalist on the planet who hasn’t experienced Cadillac’s video rear view mirror. Pinazzo showed me how the rear view cameras offer an unobstructed view of the space on the road behind the car. It really is impressive. You can expect a video review of the camera from me soon.

While the dash is full of touch friendly technology, Pinazzo says that many Cadillac consumers prefer old school push, pull, twist type controls, so the HVAC and radio controls are conventional, with redundant controls built into the touch screen for those who prefer that type of control.

Those dash mounted controls, both touch and tactile, are augmented by a centre console mounted rotary knob type. Truthfully it seems a bit less functional than those offered by several other manufacturers and probably could have been omitted from the final design.

As we sat inside the XT4, Pinazzo, who penned the outside, but was not involved in the interior design, pointed out that all of the major leather surfaces are hand stitched and where trim surfaces look like, say carbon fiber, they really are what they appear to be.

Leading up to our interview, I struggled with the question of whether or not to touch on the “women in industry” topic, as I feel that continuing the discussion perpetuates an old problem, rather than solving anything. I was enjoying the vibe of our conversation, so I decided to approach the topic.

Wheels.ca: On the “women in industry” topic, you are a designer, a lead, is it a thing?

TP: “I will say this. At the company I work for right now, I feel like they are the most progressive company that I could possibly be working for. I was trained in college to do interior and exterior design on vehicles and general industrial design. I was at GM for 15 years, working on interiors, before my leader at the time said “hey, I want to put you on an exterior.” I was given the opportunity to do one (design an exterior) and then another one and now another. I’m working with a ton of female sculptors and engineers. The last project I was on, some of the highest level people on the team were females. That’s not to say that maybe there aren’t issues, but my path has been great.”

“I really think the biggest issue right now is STEM(Science, Technology, Engineering, Mathematics). Making sure that all children are exposed to the same careers, the same types of potential careers. GM goes after STEAM, because they add an A for art, as in design.”

“I know the people before me had a way harder time. It hasn’t been like this forever, but I just happened to be in this profession at the right time.I sit next to another female exterior design manager and I work for a female executive director. I happen to be in a great place.”

Wheels.ca: What do you see in the future for design at GM?

TP: “I have to say that with Mike Simcoe (GM’s Global VP of Design) coming in for us, I feel really confident in where we’re going and that we’re going to be making some great decisions and some exciting cars. He’s a great leader, he’s classy but he’s hip. He’s got a little bit of old school, in the good way in that he’s classy. I didn’t want to lose that. I was worried that we’d have all these classy guys retire. I think that Simcoe has somehow captured the classiness of Ed Welburn and the hipness and open mindedness of a younger person. I think he’s the right guy for the job right now and that people are inspired by him.

Wheels.ca: Do you think the bean counters will let all the neat things you do make it to market?

TP: “I dunno. It’s gonna be hard. Mary has been very specific that there has to be a business case for everything. We are never going to be bailed out again. We are never going down that road again. We have to be smart and that’s why unfortunately, there is a lot of bad news in the press. We know what’s about to happen. The economy is not going to stay the way it is. They see it, they know it and are trying to be proactive. As sad as it is, they have to make sure the company is flourishing.