He was instrumental in the design of Canadian Tire Motorsport Park, née Mosport

Sir Stirling Moss, who died last weekend at 90 following a long illness, was no stranger to Canada.

The man who was, arguably, the most famous racing driver of all time, married his first wife, Katharine (Katie) Stuart Molson, of the Molson beer family of Montreal, in October 1957.

And he was instrumental in the design of Canadian Tire Motorsport Park, née Mosport, when he suggested that a turn at the south end of the circuit not be a hairpin but a sweeping turn with two corners. As a result, turns 5A and 5B were named Moss Corner.

We know the first to be true; marriages are a matter of public record. But the second? Might it be a myth? Let’s examine the evidence.

In two official Mosport histories, one by Chuck McLaren and the second by the late Bob Brockington, it is written that Moss, in 1960, was visiting Toronto and saw plans for the track. While he liked the layout, which had been designed by Alan Bunting, with input from Ray Liddle, he did suggest that the single-radius carousel hairpin at the track’s south end be changed to a 90-degree right followed by another right leading to the back straight — 5A and 5B.

This information is also included in the history of the circuit that’s on the CTMP website. And none of the Canadian racing historians — John Wright, Bob Harrington — or retired racing drivers — Walt MacKay, Jim Bray, Ludwig Heimrath — I talked to, or heard from, this week said anything that would discount this.

But the late Len Coates, in a book he published in 1973, “Challenge: the story of Canadian road racing,” told a different story. A reception was held two days before the first Player’s 200 sports car race in 1961 and Moss and two other world-class drivers of the day, Olivier Gendebien and Jo Bonnier, were featured guests.

“When they were pressed to discuss Mosport’s weak points,” Coates wrote in his book, “Gendebien and Bonnier said Moss Corner was too slow and offered little challenge to car or driver. Said Gendebien: ‘You brake, go around and accelerate. It’s too slow.’

“Bonnier nodded in agreement and looked dubious when he was told that Moss himself had designed the corner. ‘It must have been a misunderstanding,’ he said. ‘Moss likes to go fast. It’s not his type of corner.’

“This sent the reporters scurrying to Moss and he denied that he ever made any suggestions about the corner.”

Which comes as a bit of a surprise. But who really knows? Most, if not all, of the original committee members are dead and everybody I talked to about this seemed quite surprised.

To further muddy the waters, Heimrath said that Moss was in Canada earlier, in 1959, and “working on the track then.” How could that be? Well, Moss was a member of the Molson family at that time and it’s not beyond the realm of possibility that the original group, who were looking for financing to build Mosport, might have pitched Molson’s. It’s part of the history of Le Circuit-Mont Tremblant that Labatt came through with the last chunk of cash needed to build that place, so why wouldn’t Molson have been approached to fund Mosport, in whole or in part?

Whatever, Heimrath, who won three Canadian driving championships, including his first in 1961, raced against Moss on several occasions and said he was the best. “If he decided he was going to do something, like pass you, there was nothing you could do about it,” he said. “And he was the nicest guy to talk to; I never heard him say a bad thing about another driver. He was a true gentleman,” said the Canadian legend, who’s mellowed in recent years.

MacKay, of Caledon, didn’t race against Moss in that first Player’s 200, but he did drive in a 40-lap Formula Jr. race that was on the same program and he won it in a Lotus 18. That evening, during an awards ceremony at the Flying Dutchman Motor Hotel in Bowmanville, Moss gave him a trophy and a cheque for $400, “which kept me going for the rest of the season — mostly to keep my ’55 Chevy tow car running.” MacKay was surprised that Moss might not have been involved in the Moss Corner design. “I never heard that,” he said.

Jim Bray of Brantford, who raced in the production sports car race that was held just before the main event, was lapped by Moss (who drove in several races that day), “and he gave me his customary wave as he drove past.” Bray said he met Moss years later at the Goodwood Festival of Speed in England and Moss said, “You drove a Sprite in that race, didn’t you? I remember — you were a hooligan!” Bray said he didn’t mind the name that Moss had called him, he was just delighted that the legend remembered him. He also was — and remains — convinced that Sir Stirling had a hand in the redesign of his corner. 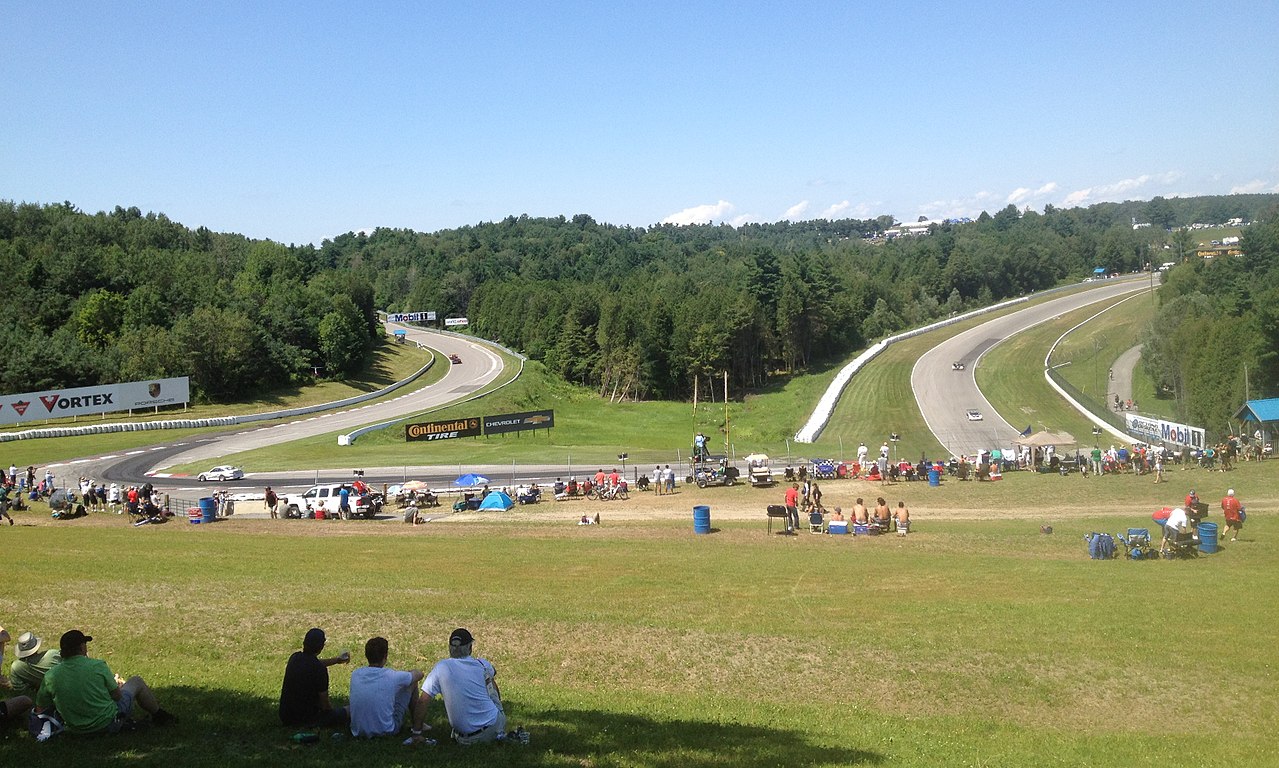 Sid Priddle, who was handling media relations for one of the Player’s races at Mosport, was rushing to get Moss to CFTO-TV in then-Agincourt for an interview when he was pulled over on Ellesmere Road for speeding. “Who do you think you are?” the cop said. “Stirling Moss?” Priddle said he had to close the car window quickly before Sir Stirling started to give lip to the officer.

Nelson Hudes, a marketing assistant at Mosport, recalls being taken for a ride around the track by Moss in 1985 when Sir Stirling had come to Mosport to race a Cooper Formula Jr. in a Vintage Auto Racing Association of Canada (VARAC) support race during a Can-Am Series weekend. “Sir Stirling was driving, F. David Stone (marketing manager) was beside him in the front seat, F. David’s wife Janice was beside me in the back. We got to Moss Corner and — I’m not making this up — Stirling Moss spun the car. It was drizzling slightly but the track wasn’t wet. He just lost it. He was quick to say that he hadn’t done it on purpose, but we knew.”

John Wright, of Kitchener, who sent me the photo of Ed Leavens, Moss and Zsa Zsa Gabor in Las Vegas, said few Canadians knew that Leavens, a London, Ont., auto dealer who raced the sports cars he sold, was a frequent co-driver of Sir Stirling’s. Wrote Wright, in an email: “Ed and Moss were teammates in the late 1950s or early 1960s at a Bonneville Speed Event with the BMC team. Ed was to drive the Sprite streamliner and Moss the “Roaring Raindrop.” I can’t remember the details, but the team took some respite at Las Vegas and it was there that someone took this photo of Ed, Sir Stirling and Ms. Gabor. Ed told me that Zsa Zsa wasn’t much interested in him, but that she was really interested in Moss … And that photo that Bob Harrington sent of Phil Hill and Moss has to be treasured. We are losing too many of our heroes these days — a reminder that life has a 100 per cent death rate!”

Stirling Moss was knighted by Prince Charles for Service to the Empire in March 2000. He won 212 of the 529 races he entered while driving 84 makes of cars, including Mercedes, Lotus, Vanwall, Porsches, Maseratis, Jaguars, Ferraris, Aston Martins, Listers and Coopers. Although he won 16 Grand Prix, he never won the world championship, but finished second four times in seven years of F1 competition and third place the other three times. His greatest victory, however, took place in Italy in the 1955 1,000-mile Mille Miglia for sports cars. With journalist Dennis Jenkinson navigating, they finished the race in 10 hours and seven minutes, which was described by Motor Trend magazine as the “most epic drive, ever.” Moss was in such a rhythm that he took his girlfriend for an all-night drive, stopping for breakfast in Munich and lunch in Stuttgart.

He was involved in two massive accidents, the first at the Spa-Francorchamps circuit during practice for the Belgian Grand Prix in 1960 and the second at Goodwood in England in 1962, which left him in a coma for a month. He retired following a private test session the following year in which he determined his skills were too diminished for him to compete for victories.

He was inducted into the International Motorsports Hall of Fame in 1990. Being very patriotic, he was once quoted as saying, “Better to lose honourably in a British car than win in a foreign one.”

In the words of Bill Warner, of the Amelia Island Councours d’Elegance, “he was witty, charming, warm and accommodating.”

And a helluva race driver, too.

When I got on the Globe and Mail in 1965, I was assigned to edit copy on what was called “the rim.” I worked alongside geniuses, men and women who had heads full of facts and figures that would come in handy when they’d be on deadline and have to insert something into a story to give it context and they’d be able to write it in because they didn’t have to look it up, they just knew.

One of those brilliant people was Jim Shuttleworth. We’d been kids in Kapuskasing back in the late 1940s, early ’50s. Jim had flaming red hair when he was young, earning him the schoolyard nickname “Woodpecker” after Woody, which was eventually shortened to “Pecker.”

So I’m on my second shift and they’re bringing me along slowly, which means I got to report for work early, and at 6 p.m., the late shift arrives. As they start to work, I look at these new (to me) faces and there, three chairs over, is none other than Jim Shuttleworth. “Hi Pecker,” I say, and Jim turns slowly toward me and his eyes widen behind the round glasses he’s wearing and he says these exact words: “Well, if I live and breath, if it’s not that scrawny, snotty, asthmatic kid from Kapuskasing, Norris McDonald. Does security know you’re in here? And put out that cigarette.”

Jim had graduated in journalism from Ryerson and although he was working in news at that time, his first love was sports and he was eventually able to live his dream when he was appointed assistant sports editor (at a time when the assistant ran the section, the editor being the manager).

He was with that paper for 31 years and he was one of the best. In a business that — at least, in those days — attracted a lot of people who really didn’t know what they wanted to do when they grew up, Jim knew who he was — and that was someone you could count on. The Globe benefited greatly from his presence.

James Robert Shuttleworth passed on March 21 at Nanaimo General Hospital in British Columbia, where he’d moved — with the Star’s Wendy Darroch, who died in 2009 — following his retirement as production editor of the Report on Business. He was in his 84th year and leaves his sons, Fraser and Geoffrey, and his sister, Mary Anne.