To commemorate Senna’s incredible racing career, we’ve compiled some of his finest racing moments here. “Pure driving, real racing.” After all, it’s what we all love.

With a commitment to that simple mantra, Ayrton Senna charted his incredible rise from obscurity in his home country of Brazil to international acclaim as one of the all-time Formula One greats. And while capturing any detail of his prolific, decade-long career in a single breath is an exercise in futility, the numbers speak louder.

Beyond the remarkable stats, Senna left an indelible mark on the sport. His intuitive, passionate driving style was both unmistakable and impossible for rivals to emulate. His charitable contributions continue to alleviate the dire conditions of Brazil’s poor. He was a workhorse, too. Gifted with a natural ability to pilot some of the fastest, most demanding race cars ever made, he worked tirelessly with mechanics and team management to rule out any inconsistencies in performance – either his own, or the car’s. 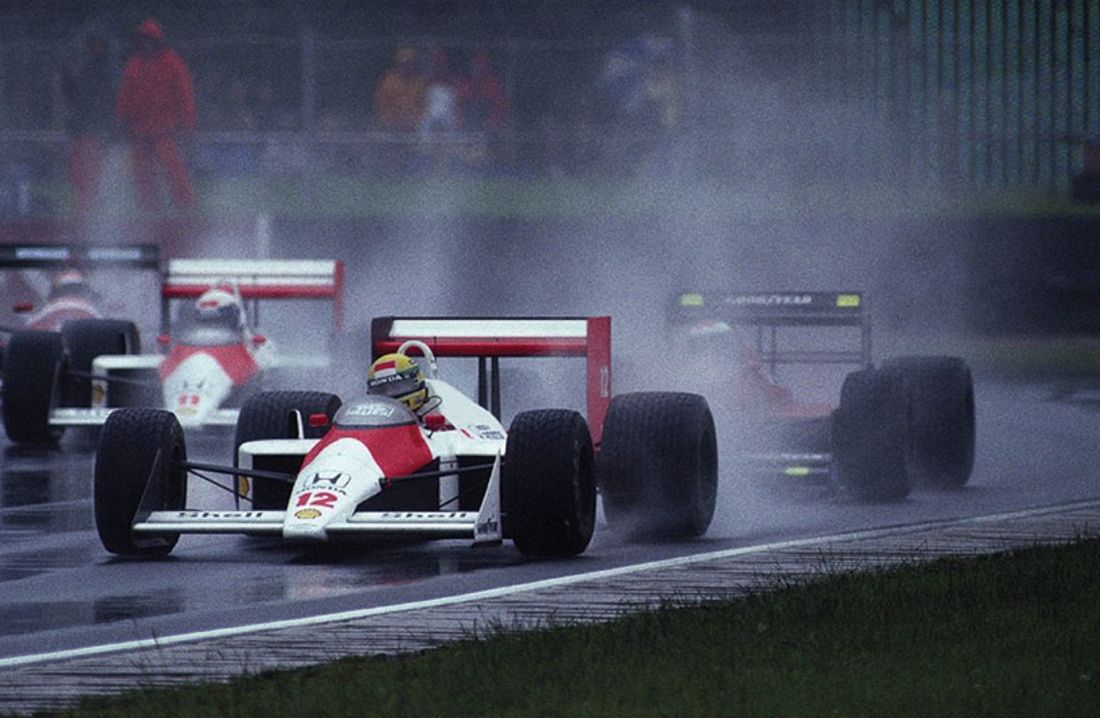 He fought his way into the sport with grit and determination – and earned a spot atop racing history the same way. From humble beginnings at Toleman, driving a car that he pushed beyond its backmarker boundaries to compete with rich, well-established F1 teams, to lucrative contracts with Lotus, McLaren and Williams, Senna embodied the feverish spirit of Formula One with his dedication to the craft.

It’s difficult to believe that Tuesday marked the 24th anniversary of his death, in part because his legacy has only grown since that tragic weekend at Imola in 1994.

To commemorate Senna’s incredible racing career, we’ve compiled some of his finest racing moments here. “Pure driving, real racing.” After all, it’s what we all love.

One of ‘the greatest laps of all time’ at Donington, 1993

It’s regarded as one of the greatest laps in Formula One history. And while several of his enduring racing moments are held in such high regard, this lap was slightly different.

A wet-weather lap to end all laps, Senna powered through horrendous conditions to the front of the pack after an abysmal qualifying session. He put on a clinic in only the first lap of the rain-soaked 1993 European Grand Prix, powering through much of the field right off the line. Enduring miserable conditions and a milquetoast fourth qualifying position, Senna initially dropped back as he struggled to maintain grip on the drenched track. Pushing an uncharacteristic moment of nerves aside, Senna forged ahead, making several advances in only the first corner of the circuit. He edged forward in the pack by powering his McLaren outside the racing lines, pushing the car to the outside of the track through corners and powering around the competition.

His tenacity nearly cost him the race. Closing in on Williams’ Damon Hill, who sat in third behind teammate Alain Prost, Senna exited a corner with such speed that he nearly slammed into Hill. Quickly regaining composure, he passed Hill through the next corner and advanced towards Prost, ultimately passing the Frenchman and clinching first place – a crowning achievement to an extraordinary lap.

In two sensational and eerily-similar controversies that shook the sport, both the 1989 and 1990 Japanese Grand Prix were mired in drama involving Ayrton Senna and Alain Prost, former teammates and fierce rivals.

. In 1989, Alain Prost had sat on pole with the option of clinching the world championship if he placed above Senna at the race. In the first corner the two stars banged wheels and skidded off the track. Senna accused Prost of slamming into him to end both their races and, in effect, win the championship.

The following year, Senna sat on pole with the roles reversed. Before the race began, Senna argued that his position was on the dirty side of the track and outside of the racing line. While stewards proved sympathetic and initially agreed to move Senna to the other side of the track, FISA president Jean-Marie Balestre overruled the decision and pole position remained on the dirtier, slippery side of the track.

In a fateful promise, Senna said that if Prost gained an advantage on him into the first corner due to his favourable starting position, Senna would try to take the lead into the corner, regardless of the consequences. Sure enough, Prost edged ahead into the corner but Senna refused to relinquish. The two made contact into the corner and were sent skidding into a sand trap, ending their races. Hardly a glamorous way to win a championship, it marked one of Senna’s more controversial moments in Formula One.

Perhaps what was most remarkable about Senna was his unmistakable presence on the track. Senna’s driving was unique, unparalleled and totally distinct. While his style was honed over time, one can glimpse inklings of the future multiple-world champion from the outset of his career. Take his first career win at the 1985 Portugal Grand Prix, for instance.

In only his second race with Lotus, Senna set a commanding lead throughout the weekend – beginning with securing pole position in qualifying and then pulling away from the field with increasingly rapid speed. Within ten laps, he had put 13 seconds between him and second-place Lotus teammate Elio de Angelis. By lap 20, he was 30 seconds ahead of de Angelis. Patrick Tambay and Richard Warwick of Renault were more than a minute behind Senna in 6th and 7th place. He didn’t let up. At all. It was one of two wins for Senna in the 1985 season, and his first of 41 victories during his career.

Monaco. 1984. Rain pouring down on Monaco’s narrow, twisting roads. Senna, in his rookie season, driving a vastly inferior Toleman that had no business competing with the rich, established likes of McLaren and Williams.

And yet, the young Senna, still largely unknown to the world, pushes the struggling car through the wet streets as veteran drivers like Niki Lauda and Nigel Mansell struggle and, ultimately, crash in the abysmal conditions. Starting from 13th position, Senna picks his way through the field, overtaking more experienced drivers on the narrow, winding circuit. By lap 19 Senna has passed Niki Lauda’s McLaren and is advancing on Prost, who leads the remaining drivers through the torrential rain.

“I think we are watching the arrival of Ayrton Senna as a truly outstanding talent in Grand Prix racing,” said James Hunt at the time.

As Senna nears Prost the race is suddenly stopped with a red flag.

Senna flies past Prost in celebration, believing that he has won the race. The race is then confirmed ended with a black flag, and Senna is informed that the previous lap’s position will be maintained as the final race results, resulting in a second-place finish for him.

While the race is halted ostensibly due to poor driving conditions, suspicions quickly swirl about the optics of a young, Brazilian driver challenging Prost: a French driver at a French grand prix.

His incredible qualifying lap at the 1988 Monaco Grand Prix

Hailed as the greatest-ever lap in the history of Formula One in Senna, the eponymous documentary released in 2010, Senna’s qualifying lap at the 1988 Monaco Grand Prix was sheer genius.

Describing it as one of the most intense experience of his life, this was the moment when Senna stopped driving with his mind. “I was driving it by instinct,” he later said. “I was in a different dimension well beyond my conscious understanding.”

“That was my maximum,” he said. A chilling moment of brilliance. 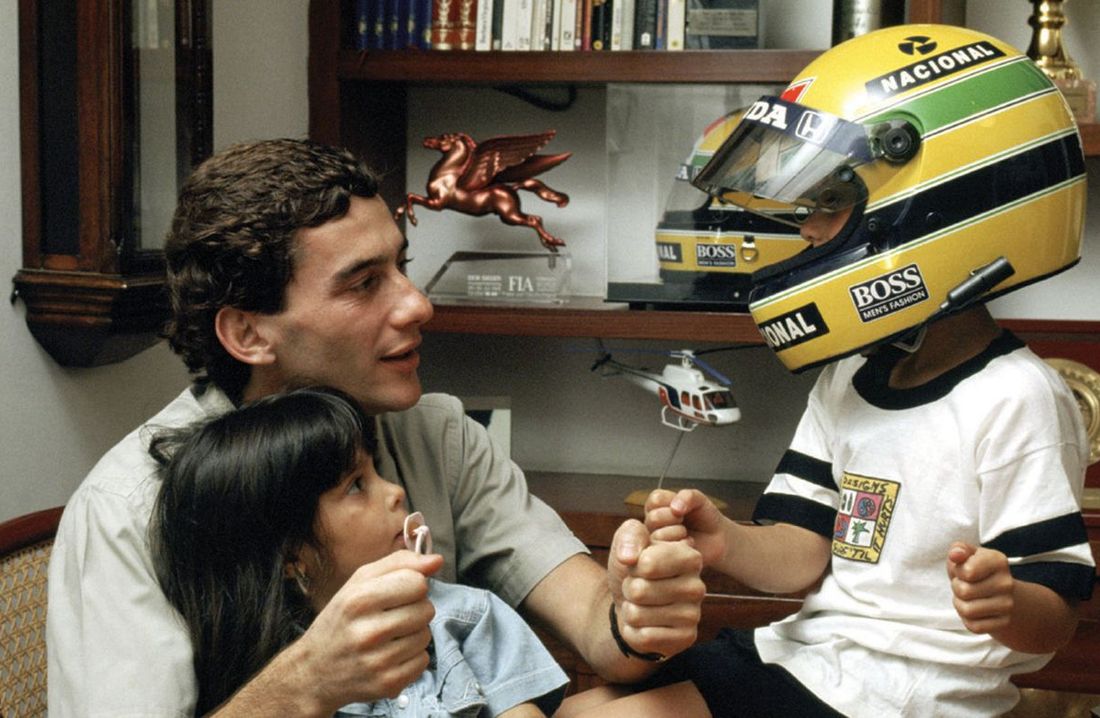