Long admired for its mechanical refinement, the 2001 Civic evidently took a step backward in terms of noise and harshness.

Like the Pillsbury Doughboy expanding from dinner rolls to the breakfast pastry segment, it wasn’t much of a stretch for Honda to go from making motorcycles to its first-generation Civic economy car in 1973.

It was, after all, laughably small (though bigger than Mr. Bean’s Austin Mini) and powered by a 1.2 L engine seemingly not much larger than a Cadillac alternator.

But this inexpensive front-driver sipped gas, started on the coldest mornings and was almost as enjoyable to pilot as a Gold Wing.

With each successive generation, the Civic grew in size and stature, winning over millions of consumers. It became Canada’s favourite car 10 years ago and has locked up the title ever since.

A subcompact since inception, it graduated into the compact category with the arrival of the seventh-generation four-door sedan and two-door coupe for 2001. Gone temporarily was the popular hatchback.

Honda enlarged the cabin mainly by raising the roof 5 cm and lifting the seats off the floor. The coupe was slung a little lower, though the back seat was still decent enough.

A trim suspension design allowed Honda to flatten the rear-seat floor, an obvious boon to passengers. The cockpit was friendly with big, legible silver-faced instruments and high-mounted heater and audio controls within easy reach.

Honda stiffened the unibody structure with an emphasis on silencing and refining the Civic’s road manners (the coupe was reinforced further for even better ride-and-handling characteristics). By selectively employing high-tensile steel where needed, all Civics earned good crash ratings.

Where engineers deviated from Honda’s proven formula was in their adoption of a conventional strut front suspension in place of a double control-arm setup. Honda insisted the change shortened the nose and improved crashworthiness, but cynics called it for what it was: a cost-cutting move.

The Civic’s engine displacement grew from 1.6 to 1.7 litres, thanks to a 4.4 mm increase in stroke. A single overhead cam (SOHC) controlled 16 hyperactive valves, generating 115 hp and 110 lb.-ft. of torque.

The sporty made-in-England SiR hatchback joined the lineup for 2002, packing a 160-hp DOHC 2.0 L i-VTEC engine and unique styling. Offered only with a five-speed manual transmission, the performance-focused SiR was tuned for European sensibilities.

A Civic Hybrid was offered in 2003, which used a small 1.3 L gas engine, auxiliary electric motors and a belt-driven CVT transmission. Indistinguishable from regular Civics, it didn’t telegraph its environmental goodness the way Toyota’s Prius did and was pretty much ignored.

All Civics received revised front and rear styling for 2004, and most models graduated to 15-inch wheels in place of the standard 14-inchers. The Civic was replaced by an entirely new generation for 2006. 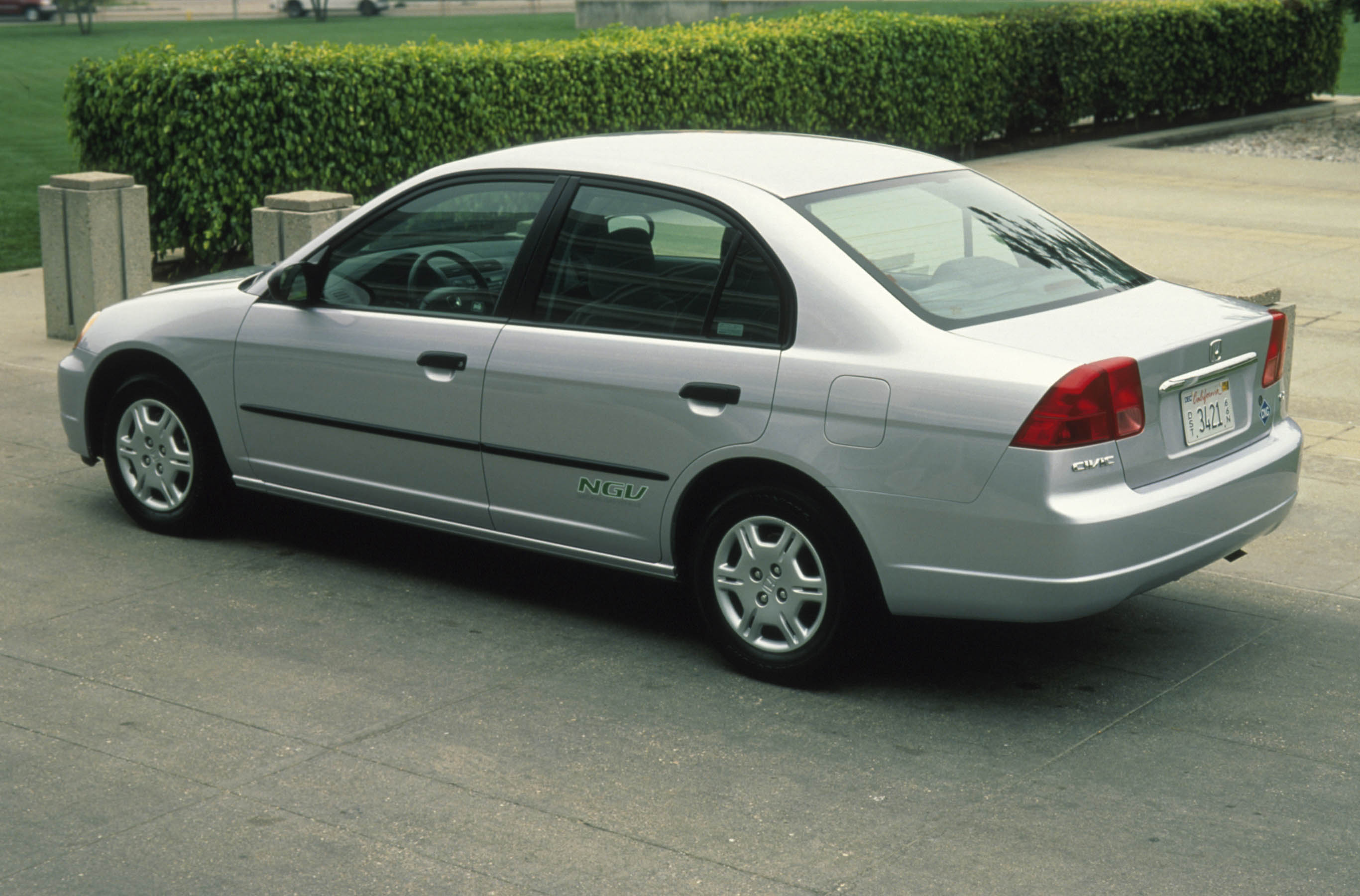 Long admired for its mechanical refinement, the 2001 Civic evidently took a step backward in terms of noise and harshness.

Car and Driver noted the engine was loud at higher revs, wind noise was prevalent and the steering was nowhere near as sharp as exhibited by older Civics. The magazine also found the ride discordant, an observation confirmed by some owners.

“Road noise is much worse than other compacts, and suspension transmits even the smallest bump to the occupants,” read one driver’s blog.

The Civic was fairly zippy for an econobox (0-to-96 km/h in 9.3 seconds) and generated a respectable 0.76 g of grip on a circular skidpad. The high-zoot SiR hatchback could hit highway speeds in 7.5 seconds.

The Civic’s miserly fuel consumption was above reproach. Many owners noted in-city economy as good as 8 L/100 km â€“ a definite plus these days.

Still, the Civic finished no better than mid-pack in comparative test-drives with other compacts; editors fingered the harsh ride and numb steering as uncharacteristic of Honda.

Besides being a palindrome, the Civic name has enjoyed a sterling reputation with Canadian consumers for decades.

Drivers adore the car’s nimble manoeuvreability, spacious cabin, economical ownership and that Honda lightness of being, the result of intricate engine design and slick mechanicals.

But the 2001 and 2002 Civic models break from tradition by literally breaking more than usual.

“At 34,000 km, I had to have both struts and springs replaced in the front end. They had blown out all their oil,” reported one owner on the Net. “30,000 km later, they feel loose and noisy again.”

Some manual transmission drivers experienced the shifter popping out of second or fifth gear, a malady that usually required a rebuild. Automatic transmissions were also known to give up the ghost, but usually at high mileage.

“Wish I had a big bottle of tequila to go with this lemon,” blogged one owner, acerbically.

The good news is the engine almost always performs flawlessly, and newer Civics (2003 and up) have exhibited fewer problems.

Still, the 2001-05 generation has been less than representative of the Civic nation, which begs the question: why are people paying so much to join?

We would like to know about your ownership experience with these models: Nissan Altima, Ford Focus and Hyundai Elantra. Email: toljagic@ca.inter.net.