An extra large utility vehicle may seem like an odd choice for a two person road trip, but the big Mazda is powered by a 2.5L four cylinder which promises thrifty fuel economy while still creating an impressive 250 horsepower.

At ten lanes wide in both directions at its widest point, Ontario’s Highway 401 was built to move people. For the most part, it does that efficiently, albeit while treating motorists to a mind-numbingly boring experience.

For the Easter long weekend, my Wife and I decided to make an escape from the GTA, to hang out with some friends in the Ottawa area. Loathed to subject our souls to the drudgery that is the 401, we decided to take a more scenic route.

Beyond the GTA, Highway 7 is kind of like a secondary super highway in that traffic tends to flow at about 100 km/h, despite the posted limit of 80. Fortunately for those who want to see a bit of the province, the layout of 7 was determined by the lay of the land rather than just bulldozed straight through like the 401. 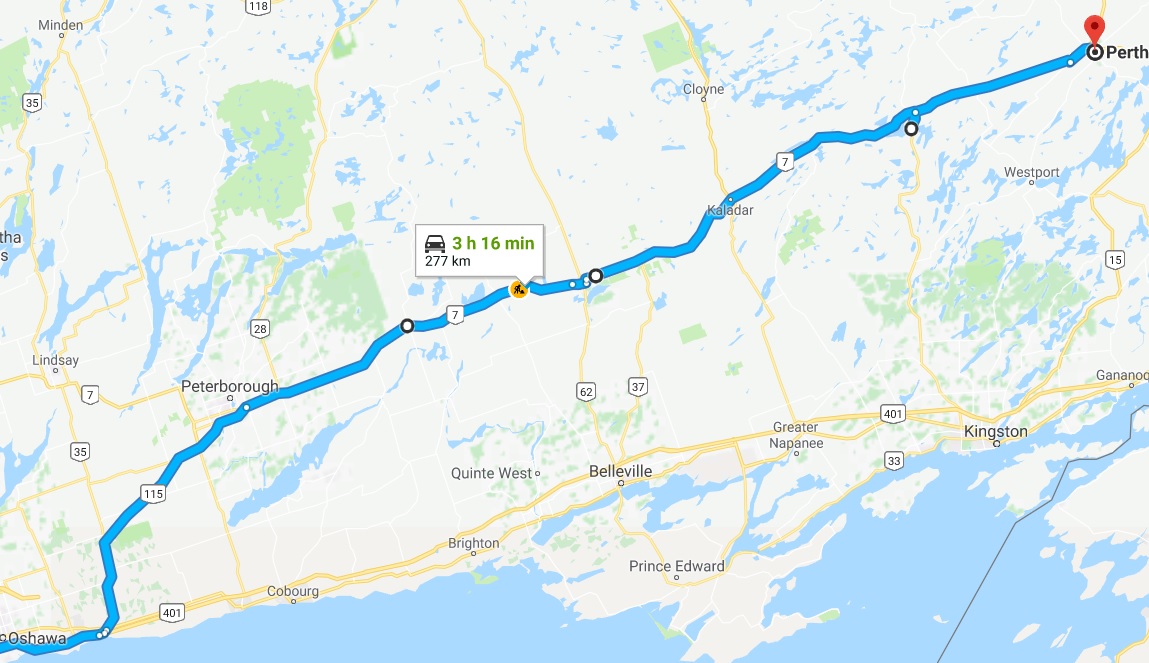 Our mount for the trip was the all new 2018 Mazda CX-9, which has so impressed Canadian media that it was named Best Large Utility Vehicle in Canada by the Automobile Journalists Association of Canada. An extra large utility vehicle may seem like an odd choice for a two person road trip, but the big Mazda is powered by a 2.5L four cylinder which promises thrifty fuel economy while still creating an impressive 250 horsepower. And 310 lb-ft of torque means that the CX-9 is still capable of towing up to 1,588 Kg (3,500 lbs).

We head east on the 401, out of Durham Region before heading north on 35/115, where the pace slows down a bit and the views improve. Already the drive is more relaxing than the 401 would have been. Door to door, google maps tells us that the trip should take about four hours and fifteen minutes, just a few minutes longer than the traditional route, but we have told our friends that we will likely arrive in seven hours. We are planning to explore a bit on the way!

Just a few minutes north of Lake Ontario, just off the highway is the small town of Orono. We made a visit recently, so we didn’t stop in this time, but the town is definitely worth a stop to check out the half dozen antique shops and the Village Bakery is well known for its awesome apple fritters.

The CX-9 continues to motor north, with 1st Wave on Sixius XM providing the vintage alternative soundtrack via the Mazda’s excellent sound system. Modelled loosely after BMW’s iDrive controller, the CX-9’s infotainment system and vehicle settings are managed through the use of a rotary dial which is really easy to use once you get the hang of it.

At Peterborough, we hang a right on Highway 7 to start making our way east. There are a couple of fuel stops along this first stretch which are always several cents cheaper than the GTA or further along the trip, so it is worth making the stop.

A short drive through some hilly farmland brings us to the tiny town of Norwood, home of Ralph’s Butcher Shop, known for their variety of house made sausages. A couple of blocks further down the street is a cool antiques barn, jammed full of stuff. Our choice of a utility vehicle for two on this trip is beginning to make more sense.

As the highway gently winds its way past farmland and the occasional campground, it also offers the appearance of towns which are just frequent enough to satisfy easily bored and curious travellers without impeding progress too much. Blink and you’ll miss the next stop, a small rail hub named Havelock. Home to a country jamboree each Summer, the town offers a caboose and small rail machines as photo ops.

Next up is Marmora, a town dating to 1820 with a rich history of mining. The town itself isn’t much to look at, but right in the middle there is a beautiful river which flows through a long park which is perfect for a picnic. Just outside of town is an abandoned open pit iron ore mine which is oddly pretty with its spring fed lake.

The quaint little town of Madoc is easy to miss, as it sits just south of the highway, where the only signs of civilization are the ever present Tim Hortons and a McDonalds with a cool access bridge. Going off the beaten path is worth it though, as Madoc is home to the Hidden Goldmine Bakery, which sells some of the best butter tarts in Ontario. For the record, I am on the “raisins please” side of that argument! 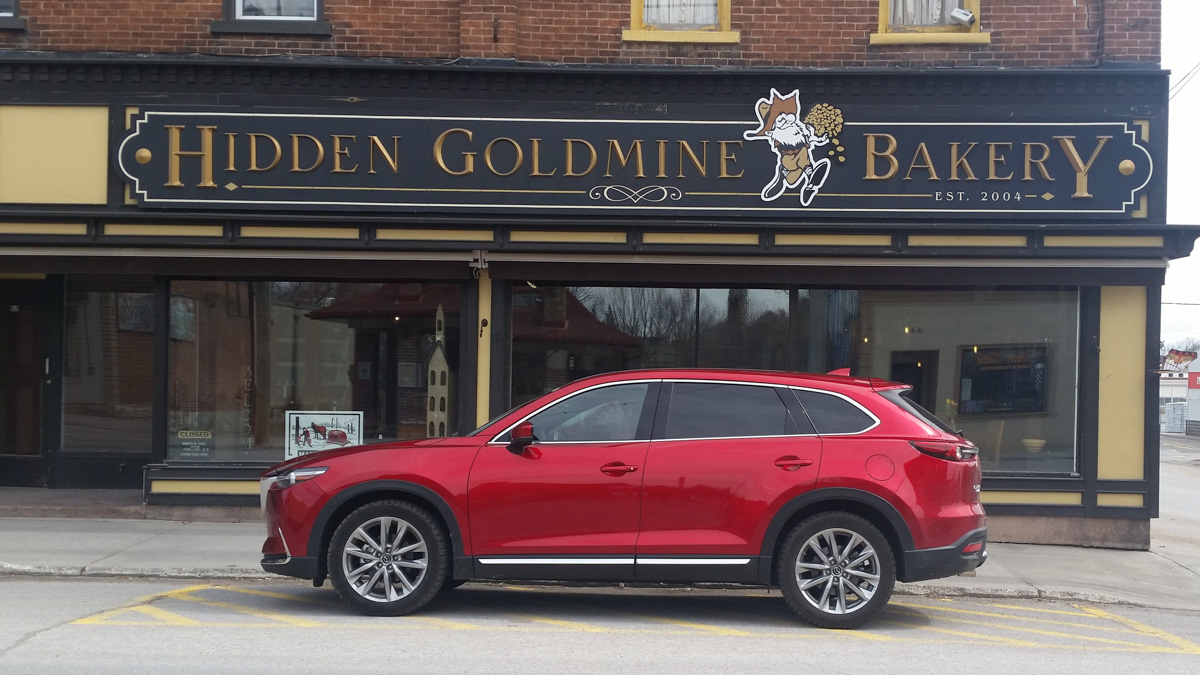 The scenery is becoming a bit more wild, as glacially carved stone makes way for hundreds of rivers and lakes. During this early Spring drive, it was interesting to see the appearance and disappearance of snow and frozen lakes. We saw lakes with boats on them already and then 20 minutes later found lakes which looked like they could have still supported ice fishing huts. Meanwhile, the CX-9’s bun warmers kept us toasty in the supportive and supple, creamy coloured leather seats.

For an hour or so, the scenery becomes the focus as the stretches between towns grow longer. Soon however, we turn off the main road to investigate a new-to-us stop. The town of Sharbot Lake is another historic rail hub, having been a stop on the Kingston and Pembroke railway. There is another tiny rail museum for photos and exploration and the town’s main drag is laid out alongside a causeway that connects the two shores of Sharbot Lake. We didn’t have time to grab a bite, but there are a couple of restaurants right on the shore which we have heard are delightful. 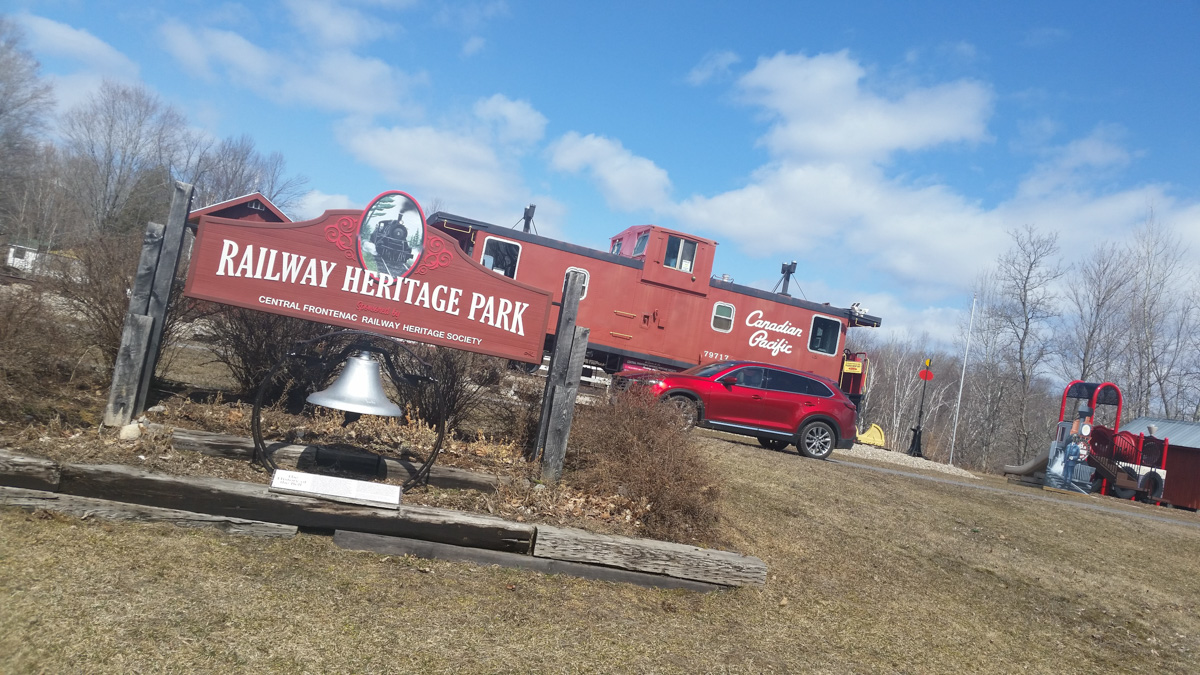 Next up on our tour is Perth, which has been called the prettiest town in Ontario. Built just after the war of 1812, the Tay River winds through the middle of town, where many buildings are constructed of the limestone blocks that the area is known for in that era. The main street features many antique and artsy shops along with a fantastic lunch spot called O’Reilly’s Ale House, which is housed in one of those period buildings and serves up top notch grub.

Those looking for history will find lots, including the nugget that Perth was the location of the last fatal duel in Canada. Somehow not surprisingly, two guys were fighting about a girl and one of them lost!

Fans of craft beer have been visiting the area to sample at the Perth brewing Company for a few years, but on this trip our goal was to check out the new kids in town at the Top Shelf Distillery. Using beautiful copper stills, Top Shelf creates their own brand of vodka and gin, along with a range of flavoured moonshine under the Reunion Moonshine brand. We bought their Ontario Cherry ‘shine to enjoy once we arrived at our friend’s place. 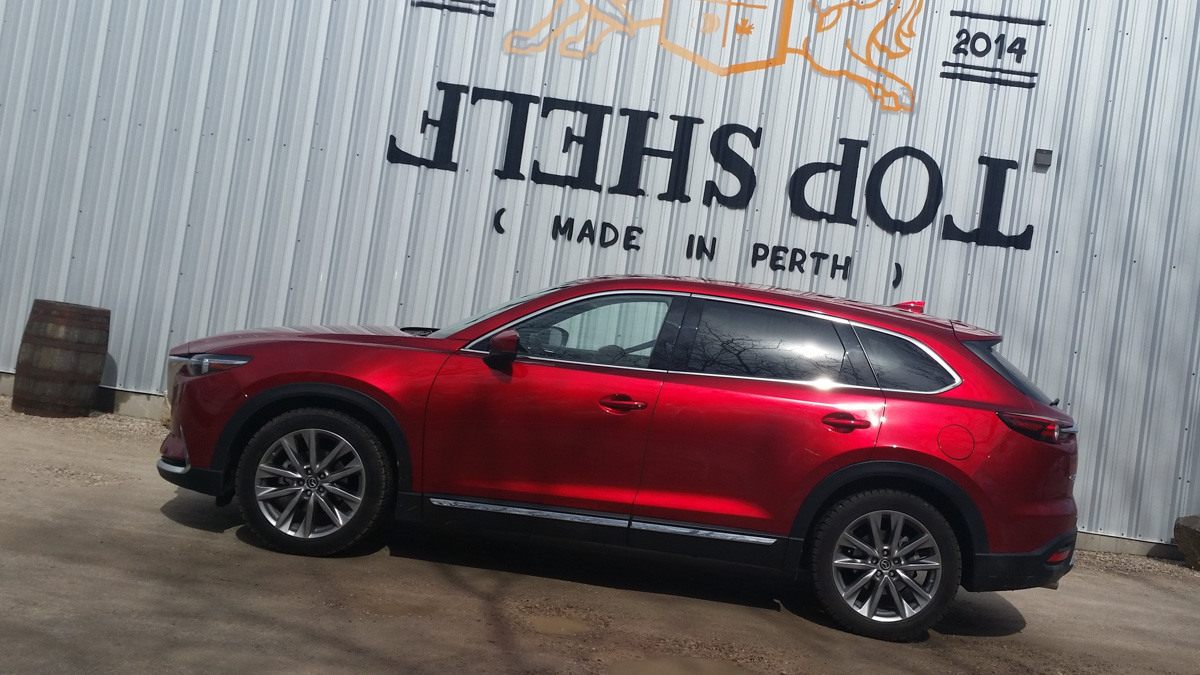 From Perth, Highway 7 leads north east through exploration worthy towns like Carleton Place and Kanata before meeting up with the hustle and bustle of downtown Ottawa. Our path took us south east through the tiny town of Rideau Ferry, where there is a treasure trove of stuff worthy of a visit from American Pickers. From there, we skirted Smiths Falls and left the lovely town of Merrickville for another day.

Instead, we confirmed that the CX-9 offers Mazda’s usual level of driver engagement on a zigzagging collection of rural side roads on our way to our final destination in Greely. It seems counterintuitive that a large crossover should offer a sporty drive and yet Mazda always manages to tune their vehicles in a manner which allows a bit of entertainment when one ventures off the beaten path.

As far as that cargo area goes, we didn’t buy any antiques on this trip. We did however make the obligatory trip over to Gatineau, where brewed beverages are fully half the price that they are here in Ontario, to stock up the garage fridge. 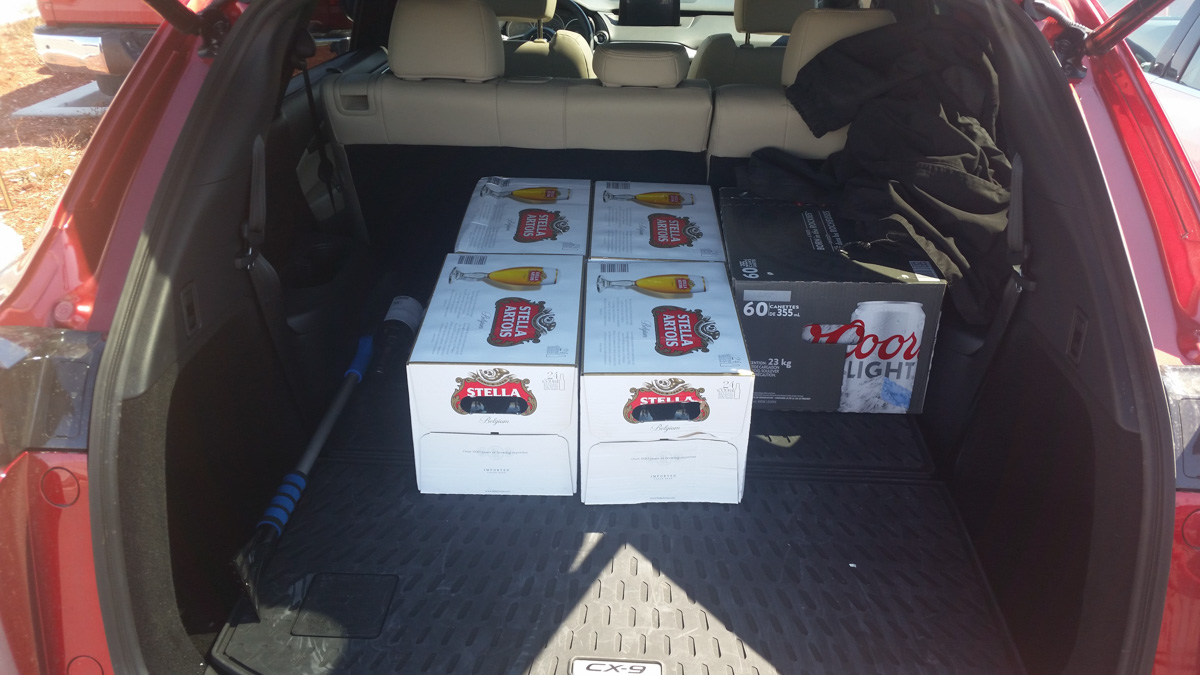 With several stops along the route, including breakfast and lunch, our round trip from Whitby to Greely did take the full eight hours that we planned for. On the way home however, we made a direct trip, which took four hours, exactly what the trek takes on the 401 takes, but with far more interesting scenery. There is so much to see in Ontario that it is a shame to just blow past everything on a super highway! 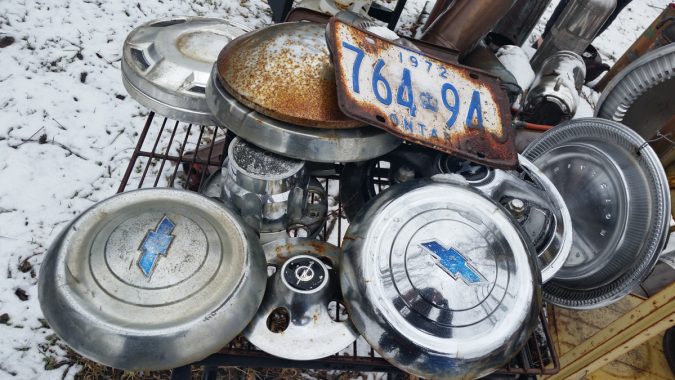 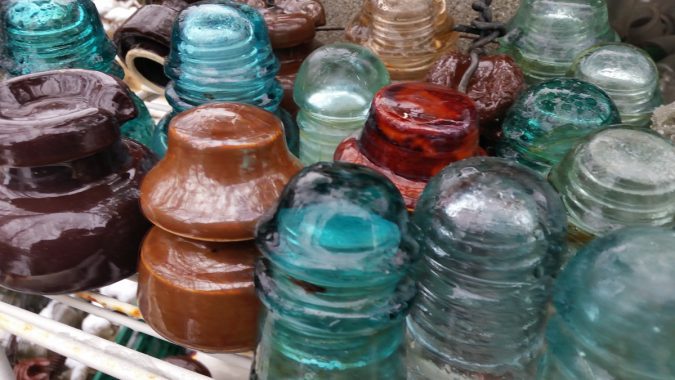 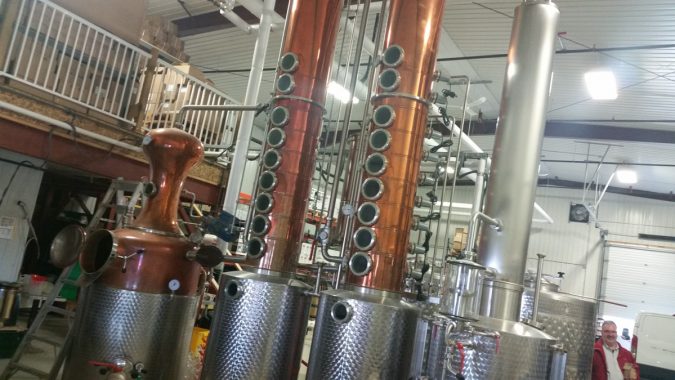 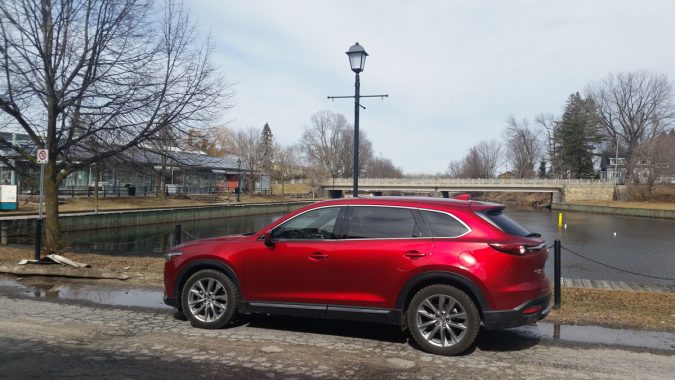