Kingston may no longer be the capital of Canada, but it is definitely the place to be to explore Canada’s rich cultural history.

Join the Conversation (0)
The history of Kingston dates back hundreds of years when it was Canada’s first capital city in 1841.  But due to Kingston’s location on the water and to avoid being attacked, the capital was relocated in 1844.

Kingston was first settled in the 1600’s on First Nation lands named Katarokwi. Kingston is now known as the “limestone city” due to the local limestone that was used to construct the magnificent heritage buildings.

The bustling culture packed city is located on the eastern end of Lake Ontario and less than three hours drive from Toronto along the 401 East towards Coburg.

Driving Map from Toronto to Kingston 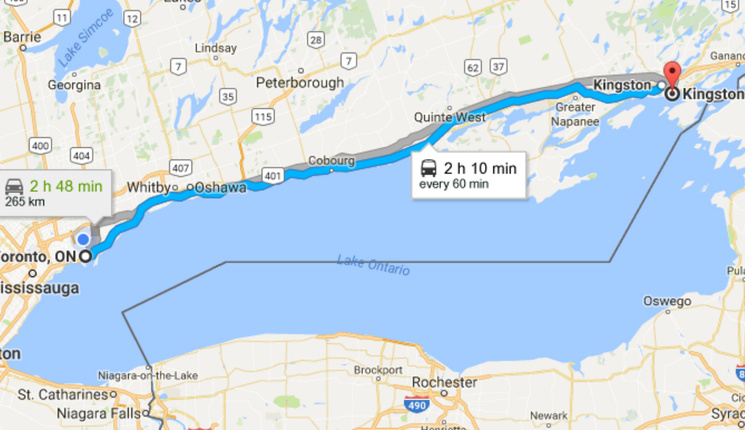 My friend and I were excited to be driving our spiffy rental car, a white Volkswagen Golf complete with that unbeatable new car smell.

With fresh cups of coffee snugly in our drink holders and a flickering GPS stuck to the dashboard we began our journey. When we decided to take this road trip it was a given that we would stop in Colborne at the famous Big Apple for a piece of delicious pie. (Vegan and gluten free options are available). They are located at 262 Orchard Drive just off Highway 401 at exit 497 – look for the massive smiling apple at the side of the road.

Our White VW at Big Apple 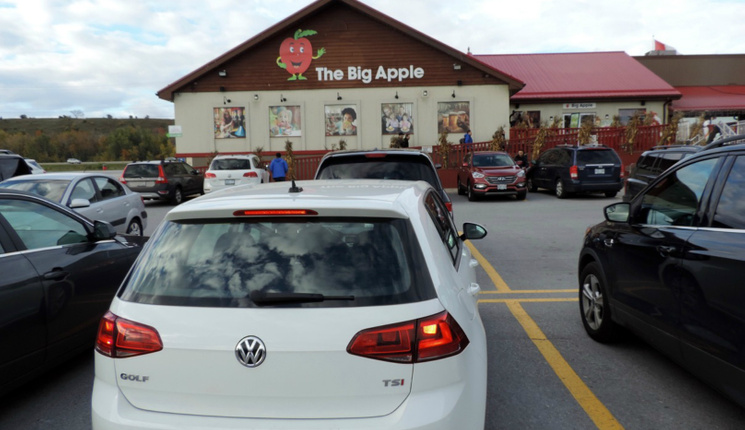 When no more pie could possibly be eaten we continued on our journey towards Kingston along the 401’s winding roads and stunning views set against the backdrop of Lake Ontario.

Kingston has many hotels to choose from downtown and we stayed at the Four Points Sheraton Kingston on King Street with a pretty view of the lake from our room.

There are many tasty restaurants nearby including the trendy and popular Wooden Heads Gourmet Pizza. Our hotel was also close to Fort Henry, a must-visit historic attraction. The original Fort dates back to the War of 1812, however it looked entirely different back then. The restoration took place between 1832 and 1837 to protect the Naval dockyard, the entrance to the Rideau Canal, and also the town of Kingston. The fort re-opened as a museum in 1938 and this historic site attracts visitors from around the world in all seasons looking to learn about this part of Canada. The show is a tribute to the original garrison and includes drums, military music, drills and a simulated battle complete with the latest technology for an action packed event. 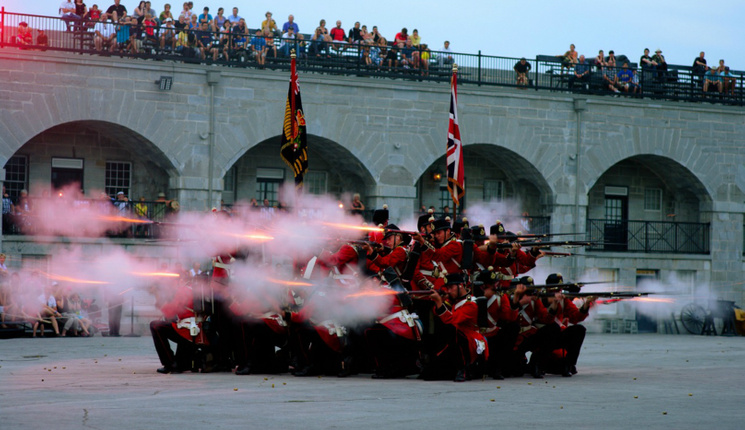 Kingston is famous for many historic things, one of them being the Kingston Penitentiary. And what better way to bond with a friend than a journey to prison? “KP” or “The Pen” as it’s commonly referred to, was Canada’s oldest and most notorious maximum-security prison. KP closed their strong gloomy gates in 2013 and now this national historic site offers guided tours to the public. 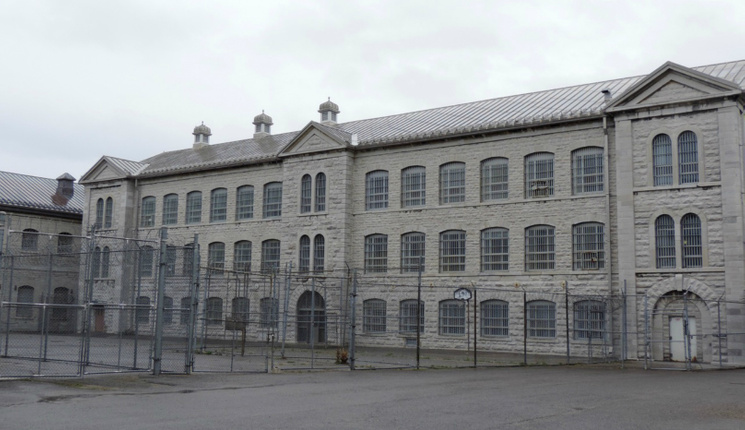 To say I was a bit nervous to explore the hallways and cells of what was a maximum security prison was an understatement. I can’t begin to even imagine what it was like for people entering the prison for real. Popular television shows like Orange is the New Black and Wentworth have brought fictional jail scenes into our homes, but it’s quite different to actually stand in the same room where convicted felons once roamed.

The first six inmates arrived at KP in June 1835.  The facility consisted of one large limestone cellblock with 154 cells. In the early days of the prison opening, children as young as eight-years-old were also incarcerated here. According to our tour guide Rick, and former KP guard of 17 years, the eight-year-old child’s only “crime” was to steal a loaf of bread. Rick also told us about violent prison riots, such as the famous revolt in April 1971 where six prison guards were taken hostage by the inmates. 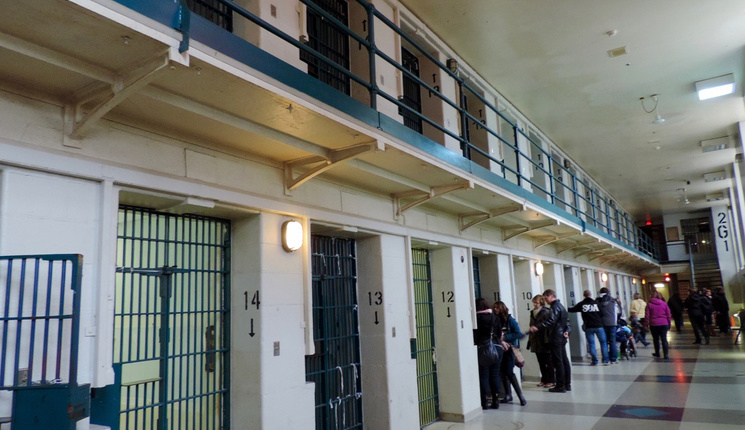 I got chills up my spine when I walked into a tiny cell and closed the clanking metal door behind me. I tried to imagine what it must have been like for inmates in the segregation units that were locked up for 23 hours a day. As we continued outside for the next portion of the tour a large gray cloud appeared and cold wet rain fell from the damp sky, as if on cue. We continued walking around the gated jail and learned about the prison’s educational programs for inmates, substance abuse program, the kitchen, the hospital, and the Aboriginal Grounds. 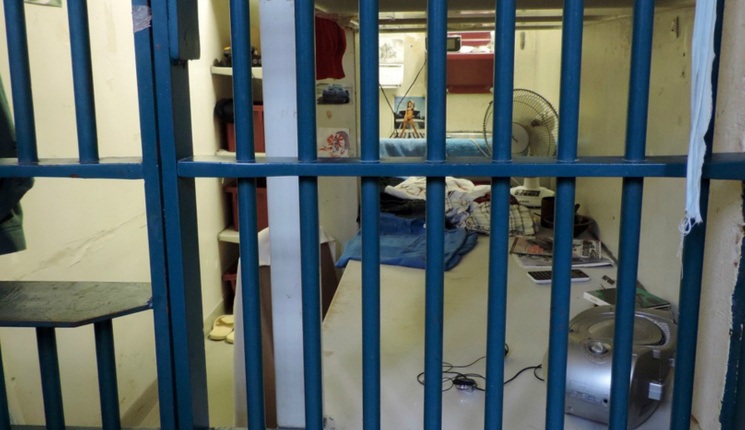 KP tours start again in May and book up fast so it is advisable to arrange tickets in advance. Proceeds from ticket sales help support local tourism and 50% of the money goes to assist youth programs through the United Way of Kingston.

Directly across the street from the prison is the Penitentiary Museum, which happens to be the former Warden’s residence. During our visit we spoke with volunteer staff about inmates daring escapes and what life was like for them inside. Admission to this unique museum is by donation.

In keeping with the historical theme of our journey, the next day we set out to find antique treasures. The outdoor Kingston Sunday Antique Market opens again for the season in April. It’s located in Market Square on the site of Canada’s oldest marketplace that began over 27 years ago. If you are looking for old books, records, and trinkets of all kinds, you will enjoy rummaging through the vendor’s goodies. 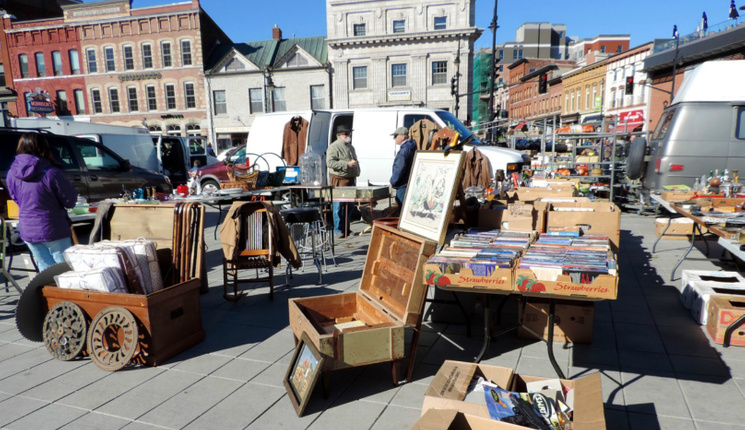 After bargaining for old treasures we walked down to the waterfront. It was still chilly when we were there, but in the spring and summer months the Kingston waterfront is bustling with activities. You can take a boat cruise or tour or simply go for a leisurely walk along the 8 km waterfront pathway that connects to the downtown core. 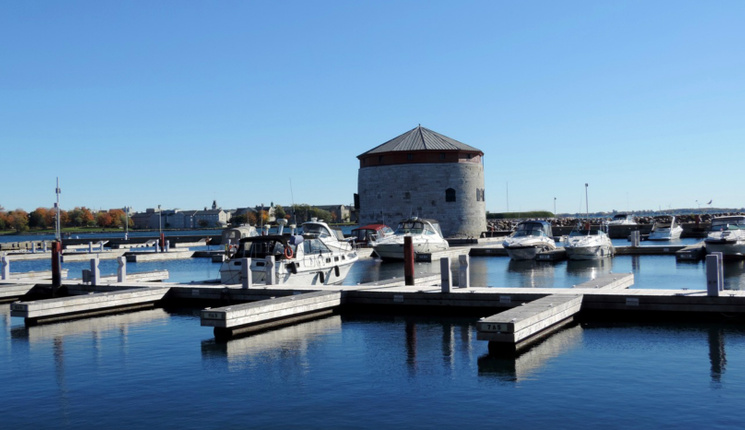 Other historical adventures you can have in Kingston are a tour of City Hall, Bellevue House, the Murney Tower, the Maclachlan Woodworking Museum, and the Pump House Steam Museum. Kingston may no longer be the capital of Canada, but it is definitely the place to be to explore Canada’s rich cultural history. If you want to keep driving after Kingston, Skywood Eco Adventure is located about 45 minutes east along the beautiful and scenic 1000 Islands Parkway, and is Canada’s biggest zip line and aerial adventure park.

Also Read: Road Trips To The Best Fall Colours Of The Season


Have you taken a road trip to Kingston or the 1000 Islands?  Let us know about your favourite attraction in the comments.

All photos taken by Miriam Porter unless otherwise noted.

With help planning your road trip to Kingston visit their Website.

Miriam Porter is an award-winning journalist whose articles have appeared in the Washington Post, the Huffington Post, the Toronto Star, Travel + Leisure, Today’s Parent, Eater, Metro, Mental Floss, and Yahoo. She writes about family travel, social justice issues, and veganism. You can find her on Twitter @MiriamRiverP.