Join the Conversation (0)
Urban infrastructure, including highways, parking lots and public transit, is manmade, which means it’s typically built by men, for men. Historically, public spaces haven’t been designed for women or their needs as mothers, workers and caregivers.

While many people don’t think of urban infrastructure as a gendered issue, research shows that men and women navigate cities in distinct ways. That means infrastructure affects their lives differently, whether it’s a highway that cuts off a neighbourhood from nearby shopping or a poorly lit subterranean parking lot that feels unsafe at night.

“Men are more likely to make linear journeys between home and work that don’t involve extra stops along the way,” said Leslie Kern, a professor of geography and environment and director of women’s and gender studies at Mount Allison University in Sackville, N.B. “And they’re also more likely to have access to a car than women are.”

She said women tend to walk and use public transit more than men, and their travel patterns through a city — even when they are using a car — are more likely to involve multiple stops, such as picking up prescriptions or groceries and dropping off children. Women are also more likely to juggle multiple jobs yet are still primarily responsible for childcare, managing the home and taking care of other family members. Cities haven’t been set up to prioritize how that work happens, said Kern. 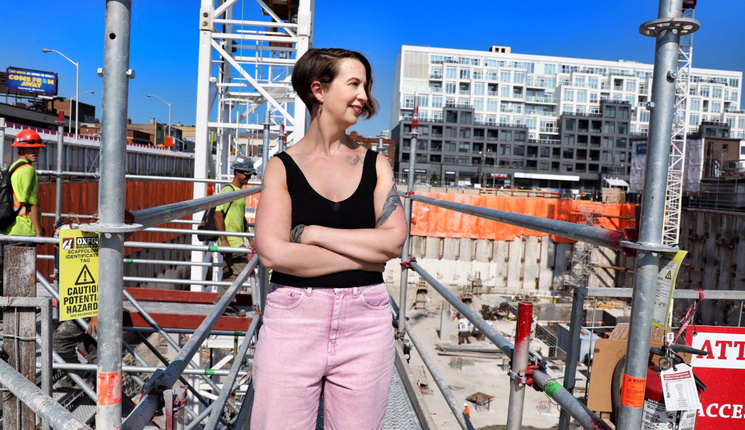 These are some of the topics Kern explores in her recently published book, “Feminist City,” which encourages people to look around their community and ask: Who are these spaces meant for? Who feels included and safe and welcome, and who might feel excluded, unsafe or even pushed out of the city?

As a feminist, she looks at these issues through a gendered lens, but infrastructure can also exclude new immigrants, the elderly, the disabled and low-income families.

Engineers, architects, city planners and politicians have historically been male-dominated professions, “so when thinking about what points of view are around the table, it’s probably a relatively narrow slice of society that’s represented in those rooms and offices,” Kern said.

Infrastructure built for male patterns of travel around the city have inadvertently excluded women and other groups, she said. “And, of course, it has not really paid much attention to women’s emotional and day-to-day experiences of urban spaces, which can include fear,” Kern added.

“When we think about the priorities that might be emphasized in the design of urban spaces, there’s a certain kind of efficiency of space use that planners and architects want to have, which could include burying things underground like parking garages,” she said, pointing out the safety issues that affect women in urban areas.

Even landscaping and beautification elements can be an issue. Sometimes these elements obstruct sight lines or create dark pockets of bushes or trees that don’t feel safe. That’s why we’re seeing the development of more mixed-use, pedestrian-friendly developments to avoid the separation of zones, like a residential zone with no shops or a business district that empties out after 6 p.m., she said.

Major roads and highways can also serve to physically divide neighbourhoods and inadvertently create accessibility issues for people who don’t own a car. Toronto’s Gardiner Expressway, for example, is often cited as an eyesore that cuts off downtown Toronto from the waterfront. Solving that issue is complex — rebuilding or moving highways isn’t exactly an easy proposition.

The city has experimented with different ways of using the space under the Gardiner, whether hosting al fresco dinners in summer or creating a skating path in winter. But making those spaces feel safer means dividing pedestrian traffic from car traffic as much as possible, said Kern.

That’s also the case with bike lanes. “It’s not just about painting lines on the road but thinking about how those connect to different communities and making those spaces physically safer,” she said. “For so long we’ve kind of pitted drivers (against) cyclists. If you have protected cycling infrastructure, it’s better for drivers too, because you’re not as likely to have somebody racing up alongside your car … and everybody’s going to feel more comfortable sharing the road if you clearly know what part of the road is yours.”

Some cities are moving toward universal’ design, which centres around physical accessibility of the built environment. It’s often associated with the disabled, but it also benefits mothers pushing strollers and seniors with mobility challenges (as well as their caregivers).

It’s not just targeted at a small population: Kern said these design tweaks make a city more accessible for everybody. “Universal (design) is a trend in planning, and I do see it overlapping with a feminist vision of greater equity in the city, too,” she said.

By Vawn Himmelsbach special to wheels