Housed in the Royal Mews garage at Buckingham Palace. Bentley, Rolls-Royce, Land Rover and Daimler are the vehicles most associated with Queen Elizabeth, who at 90 will own the first Bentayga SUV.

As Queen Elizabeth turns 90 on April 21, we pay tribute to some of the vehicles in the royal fleet.

Bentleys, Rolls-Royces, Land Rovers and Daimlers have been the brands of choice used by the Queen, members of the royal family and visiting dignitaries, all part of the fleet of vehicles housed in the Royal Mews garage at Buckingham Palace.

Chauffeurs drive the state vehicles, but having served as both a mechanic and ambulance driver during World War II, the Queen has logged a lot of her own drive time.

Starting with the new Bentley SUV that Queen Elizabeth is the first in line to own, having driven a prototype at her Balmoral estate in Scotland last fall, the following are six key cars Her Majesty is famously associated with. 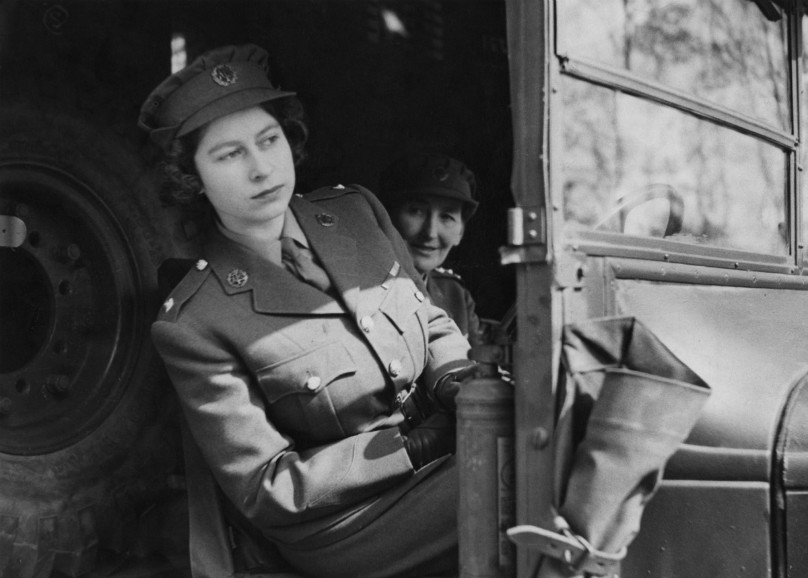 Unveiled at the 2015 Frankfurt Motor Show in September, this ultra-luxury SUV is a descendant of the British carmaker’s first SUV concept, the 2012 EXP 9. Its twin-turbo, 600 hp W12 (12 cylinders configured in a W shape) engine propels the Bentayga from 0 to 100 km/h in 4.0 seconds to a top speed of 300 km/h. Starting at $290,381 , the Queen’s is #1 of 608 “First Edition” models marked with Union Jack badges, unique 22-inch alloy wheels, illuminated door sill entry plates, and a gravitationally self-winding Breitling dash clock. All the first editions were sold in advance and Bentley expects to assemble 3,000 to 4,500 Bentaygas per year to meet the demand for the world’s first uber-luxury SUV. Bentley hails its first ever 4X4 as “the most powerful, luxurious, and exclusive sport utility vehicle in the world.”

RELATED: Bentley Bentayga: the fastest, most powerful, most luxurious and most exclusive SUV in the world 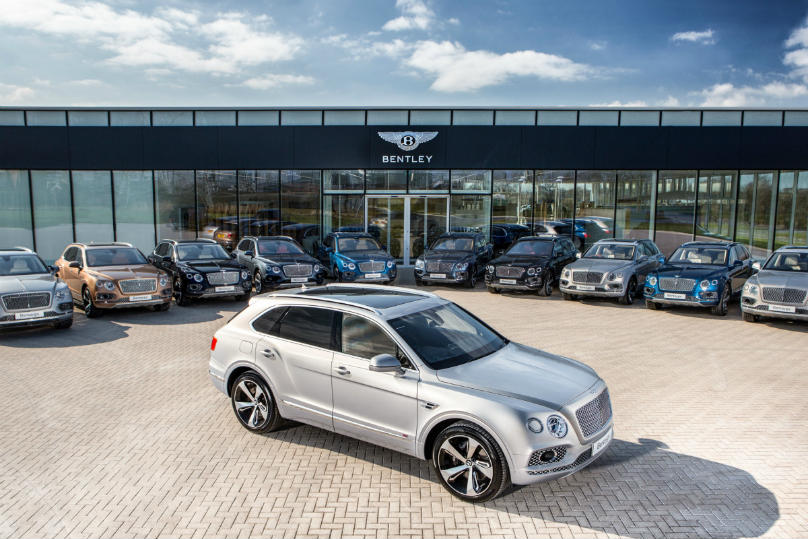 It’s been said that Queen Elizabeth has owned as many Land Rovers as Corgis since her accession in 1952, and when it came time to update her 2002 Range Rover roadster, HRH went with a longer wheel base Range Rover Hybrid LWB landaulet. Powered by an SDV6 3.0-litre 340 hp turbo diesel engine mated to an electric motor and an eight-speed automatic transmission, it’s capable of launching from 0 to 100km/h in 6.9 seconds and reaching 217 km/h. As a state vehicle, specially customized by Jaguar Land Rover, this SUV is for public functions and not country cruises. It’s the fourth time the carmaker has built an open-roof landaulet model for the Queen to use as a parade vehicle, from which she can be seen as she waves to crowds. While private-use regal Land Rovers have traditionally been painted British racing green, state vehicles, from SUVs to limos, are typically a maroon colour, called Royal Claret Livery. 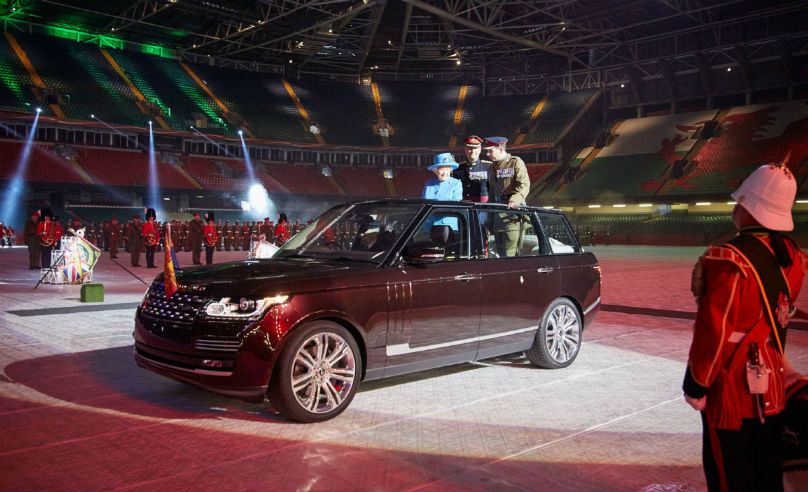 Custom-built for Queen Elizabeth II’s 2002 Golden Jubilee, this lavish limo cost almost three times more than the base model’s list price. Weighing about 4,000 kilos, its 400 hp 6.75-litre V8 runs on propane to reduce emissions. Designed with security in mind, this state vehicle was expanded in length, width and height to contain all the necessary safety elements making it bulletproof and blast resistant. The tires are made with Kevlar and the sunroof is impervious. The bulked up exterior and cavernous insides makes occupants seem tiny. The glass panoramic roof and windows have a reflective coating sandwiched between two glass panels to keep it cool inside. It’s one of the Queen’s two Bentley state vehicles. 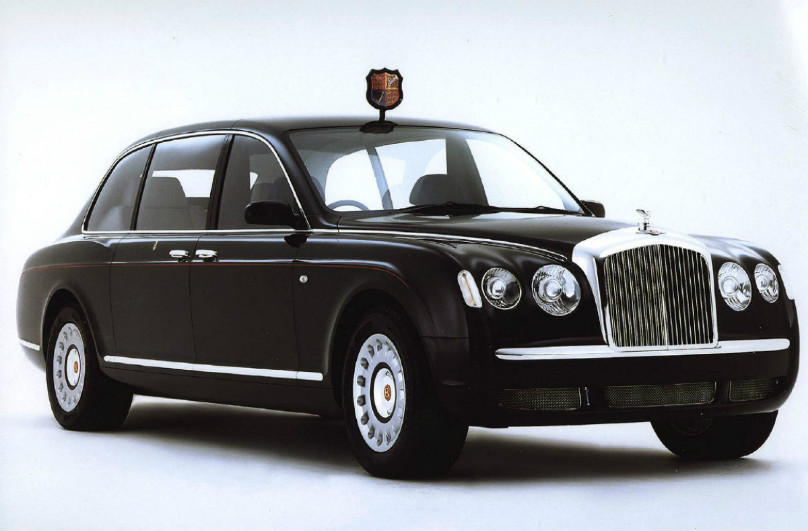 HRH has driven many Defenders since Land Rover began supplying 4X4s to the royal family when her father King George VI reigned in 1948. The Queen rarely drives in public, but she’s been often seen casually attired behind the wheel of these iconic British vehicles on royal properties. At Balmoral in 1998 she took the visiting prince of Saudi Arabia, Abdullah bin Abdulaziz Al Saud, for a spin around the grounds. Hanging onto his seat, the future king of the Arab nation that forbids women to drive asked his regal chauffeur, through his interpreter in the back seat, to slow down. Its 122 hp 2.5-litre, five-cylinder diesel engine tops out at 130 km/h, more than anyone, including royalty, would care to go in a rough riding box built more for off-road conditions than long motorway hauls. The last Defender rolled off the line Jan. 29 this year. 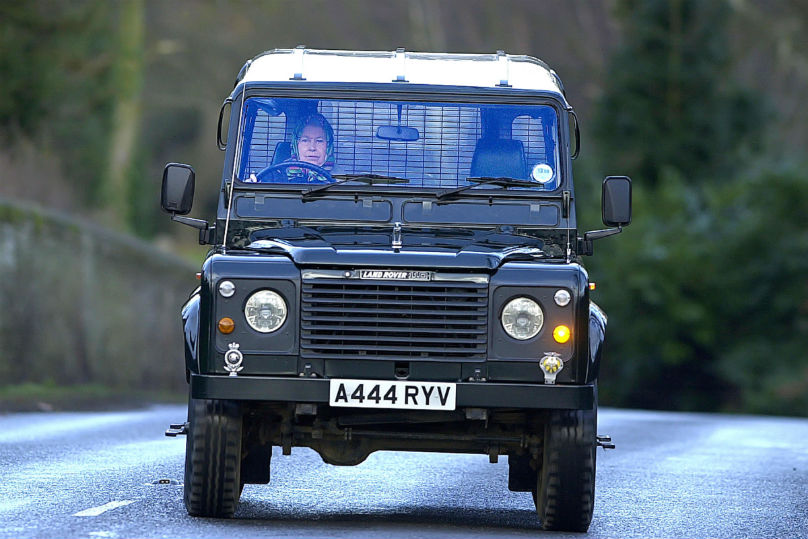 The official state vehicle until 2002 when Bentley became the Queen’s favoured armoured transporter, the Phantom VI was a gift from the Society of Motor Manufacturers and Traders in honour of her 25th anniversary as monarch. This was the royal Rolls that delivered Prince William’s fiancée, the soon-to-be Duchess of Cambridge, Kate Middleton and her father, to the 2011 wedding at Westminster Abbey. It was repaired and restored after protesting students pelted it with paint bombs, rocks and sticks five months earlier. The first Phantom VI ranked as the world’s most expensive car when it debuted in 1968. Packed with security features, the Queen’s Phantom is a custom-made, raised roof limo powered by a 535 hp 6.75-litre V8. The Queen’s Phantom VI has a silver hood ornament depicting St. George slaying a dragon, instead of the traditional Spirit of Ecstasy emblem. 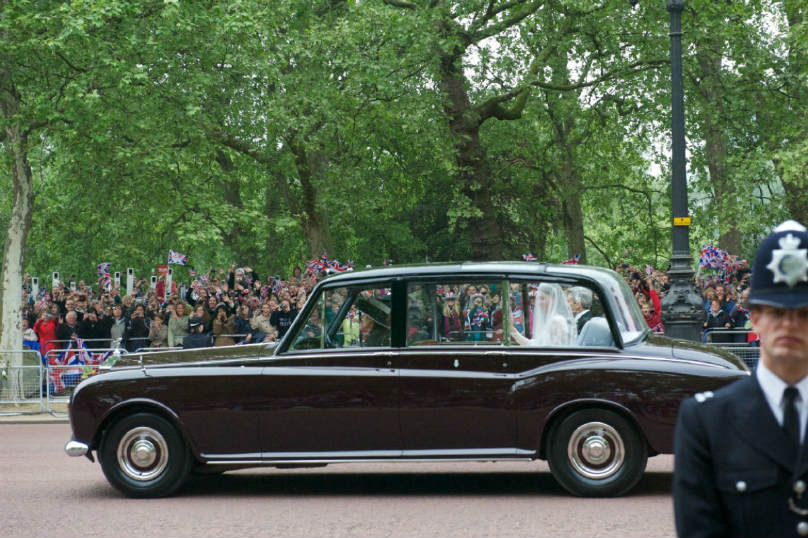 The Queen has had three Daimlers for her personal use and for family members to travel between Buckingham Palace, Windsor Castle and in the London area. She’s even driven one. Built at Jaguar’s Coventry factory, Daimlers have been a part of the royal fleet since they were first built in 1896. The Queen Mother owned four and monarchs from Edward VII to Elizabeth II have been chauffeured in Daimlers. The Queen’s favourite Daimler limo had custom security and communications features as well as various personal touches, like a rear sliding console panel for her handbag, specially designed window switches, custom leather seats and lambskin carpeting. Its supercharged 358 hp 4.0-litre V8 could reach a top speed of 250 km/h. That British racing green-coloured Daimler sold at auction in 2013 for £40,500 ($75,440 Cnd.) complete with a few Corgi hairs visible in the carpeting. 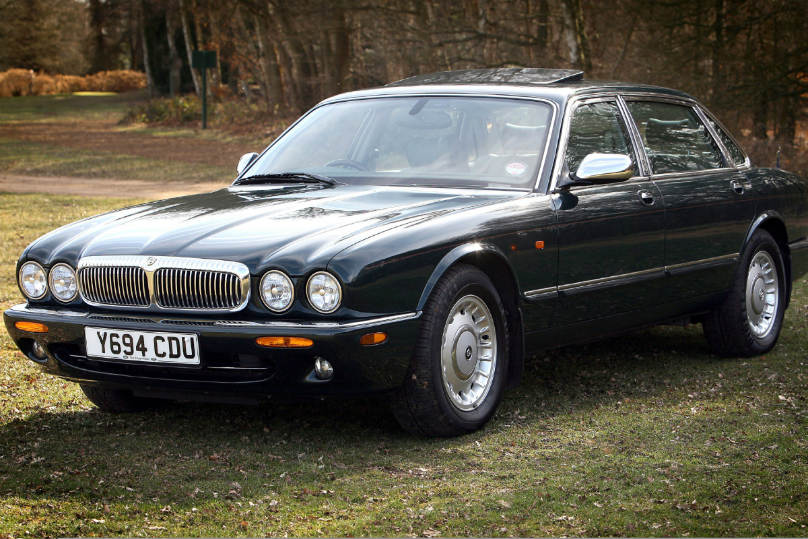