Driving with VR goggles is a mind-altering experience.

Join the Conversation (0)
MUNICH – When I learned that BMW was going to be staging a mixed reality demonstration for journalists to sample as part of the company’s CES preview in Munich, I wasn’t sure exactly what it would entail.

Now, I know what virtual reality is and I’m familiar with its presence in media, especially video games, where VR headsets are required to play specific titles on PC and console, but mixed reality had me stumped.

What is it? And how was I going to experience it behind the wheel of the all-new 2023 BMW M2, a car that had not yet gone into production at the time I was in Munich?

Well, as it turns out, BMW’s version of mixed reality is much more interactive than anything you’ll experience in VR on a PlayStation 5. 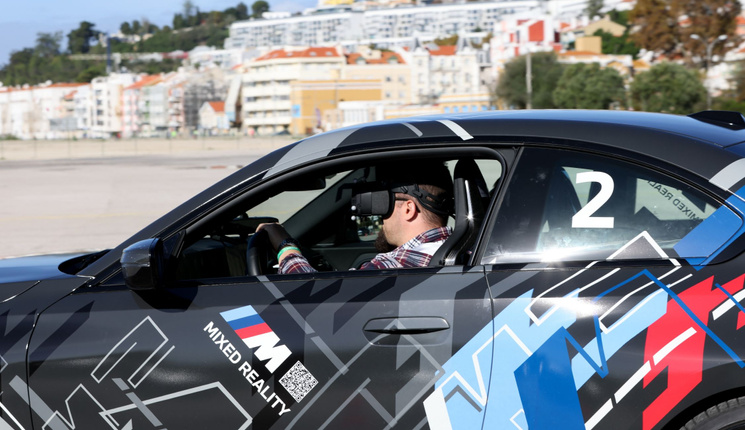 First, some background on BMW’s M Mixed Reality experience. What I and a handful of auto journalist colleagues experienced in Munich is the result of a collaboration between BMW M engineers and Epic Games, a North Carolina-based software and video game developer behind titles such as Fortnite and Gears of War, along with Unreal Engine, a graphics game engine used to power many high-profile games.

The product of the collaboration, which was unveiled in May at the Web Summit tech conference in Lisbon, is a virtual driving experience where an M2 has been turned into a video game controller of sorts.

Once strapped into the car, the driver puts on the VR / MR headset and is tasked with completing racing game challenges on a virtual track such as avoiding obstacles, collecting “coins” (BMW logos) and, of course, recording the fastest laps possible. If you think this sounds a little like VR Mario Kart, the Nintendo classic, you’re not far wrong. Only in this instance, you’re on track alone and there are no exploding shells to avoid.

As for why BMW has done this, the answer is the future. As in, to demonstrate what virtual automotive experiences could look like soon. Plus, and this is just my opinion, it’s pretty darn cool.

So that’s the gist of it, now for some first-hand impressions.

The BMW M Mixed Reality experience was staged at the company’s Driving Academy in Maisach, on the grounds of an old military airfield located about 30 kilometres west of Munich.

Our driving sessions coincided with a cold and drizzly late November day, so lap records were in no danger of falling. Still, I was feeling a fair bit of nervous excitement as our group was shuttled out to a far corner of the facility, as I really wasn’t sure what to expect. I’ve worn VR and AR (augmented reality) glasses before, but never while driving. 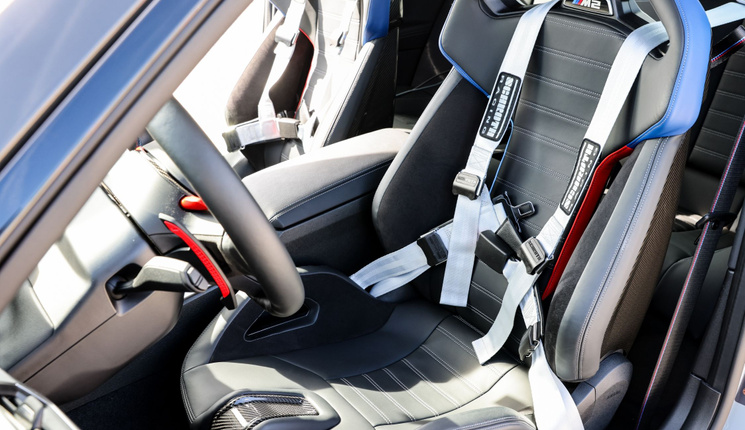 Once my turn arrived, I strapped into a pre-production M2 (with a four-point harness!) and followed the instructions of a developer riding shotgun. The headset has an earpiece, so I listened carefully as a female voice guided me to the (virtual) starting line for my laps.

A few things to note here. One, when I looked down, I could see my legs, hands and the car’s console area, so I did have some real-world reference points. Two, I wasn’t going fast – the virtual track was short with several avoidance maneuvers and hairpin turns, so my top speed was less than 60 km/h.

So, what did I see? A virtual racing simulator, with a futuristic-looking track and skyline that reminded me vaguely of Las Vegas at night. Everything was black, with red accents to highlight the outline of the track and its obstacles.

Large red Xs would appear that I had to avoid and there was a trail of BMW coins I had to drive over to pick up to collect time bonuses that would improve my overall result. 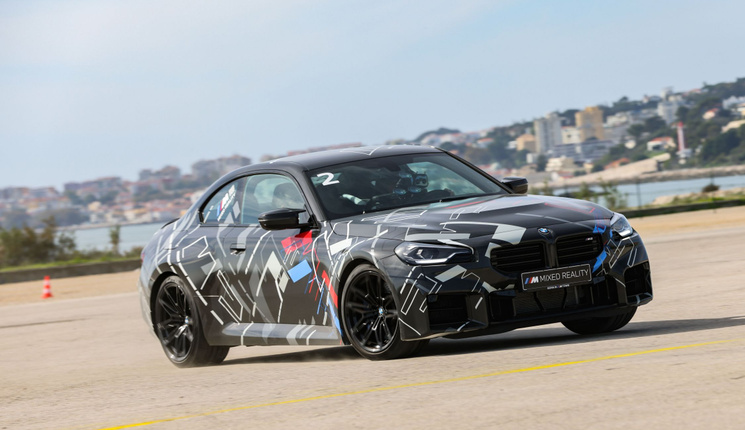 I’ll admit I was a little hesitant on my first lap as I adjusted to the bright visual stimuli my brain was being bombarded with, but I was faster on the second lap. Familiarity with the track while also being more adjusted to the experience helped a lot in that respect.

One of the more interesting aspects of the experience is the lack of sensory depravation. Despite the virtual visuals I was absorbing, I could hear everything going on outside the headset – engine sounds, wet sloshing on track, tire slippage under hard braking and, of course, information being relayed to me by the developer in the passenger seat.

The feeling of driving was ever-present. The sensation of doing so while being in a virtual environment is counterintuitive and a little strange at first, but once familiar, the driving feels mostly normal.

In sum, the BMW M Mixed Reality experience was a lot of fun. Immersive, innovative, and mind-blowing. And it didn’t make me feel nauseous, a common VR side effect.

But as much fun as this was, I have to say that I can’t wait to drive the 2023 M2 without a headset.