Penske’s suggestion of IndyCar, NASCAR double-headers is more than it seems.

Once upon a time, auto racing coverage on TV was almost non-existent. There was some on ABC’s Wide World of Sports on Saturday afternoons but “live” broadcasts of NASCAR didn’t start till the Daytona 500 in 1979 and Indy cars soon followed. F1 races would be tape-delayed.

In the case of F1, the “suits” who ran the TV networks couldn’t have cared less. I would say to them, “Nobody wants to watch a car race when it’s over and everybody knows who won,” and they would say, “Stop complaining; at least you get to see the race.”

That led to me writing a column in which I said, “If the day ever comes when they have to delay the telecast of a baseball game, and everybody already knows the outcome, then hardly anybody will watch when they actually get around to putting it on.”

The guy who ran one of our two 24/7 sports stations at the time dropped me a note and said, “Nice column but it will never happen so we’ll never know.”

Well, guess what? It’s happened and we’re finding out and the news ain’t good.

Everything in the entire world of sports, not to mention the world, period, is shut down. All that these all-sports stations have to put on the air is stuff that people already know the outcome. And they are losing viewers. Big time. Sportsnet’s and TSN’s numbers are down 75 per cent. Wow.

This doesn’t prove a lot but one thing is sure: for a sport – any sport – to attract eyeballs, it has to be live and in colour (as they used to say). It has to be happening while people are watching. Otherwise, who cares?

I think watching Jose Batista throw away his bat after hitting that home run a few years ago was one of the greatest thrills I’ve ever had as a sports fan. I even enjoyed watching the replay at the time. Fabulous. But I have seen it, because of Sportsnet promos, about a thousand times in the last two weeks and the thrill is gone. In fact, because this promotion is shown on all of the Rogers cable channels, I am now becoming irritated, I have seen it so often. The last thing I am going to do is turn on Sportsnet to watch that whole game.

(I should be in charge of all-sports stations, by the way. I know they are in a bind, but why show games, competitions and so-on that only happened in recent years? Is there not film out there of the World Series in 1952? How about the Leafs and Canadiens in 1967? Or the race between Mantle and Maris to break the Babe’s home run record? How about Palmer and Nicklaus going head-to-head in the Masters? Secretariat winning the Triple Crown? Hulk Hogan against Macho Man Savage at Wrestlemania 30 years ago. I betcha they wouldn’t have 100 per cent viewership but that stuff would attract more than the 25 per cent of the total that they’re getting now.)

And I would also promote the hell out of the virtual auto racing that’s going on now. It’s new. It’s exciting., It’s virtual but it’s real. While it’s ironic, those same “suits” who pooh-poohed auto racing back in the day might come to depend on it in the days and weeks ahead, particularly if all the other sports are out of action for any great length of time.

The reason, of course, is that auto racing is just about the only sport that is realistic enough to be presented as “live and in colour.” Real-life drivers can sit in their simulators (some so sophisticated you can feel it if you run over a pebble) that are worth tens of thousands of dollars and through the wonders of technology race against each other in a real-race environment.

I watched some of the virtual NTT IndyCar Series virtual race at virtual Twin-Ring Motegi in virtual Japan Saturday and they had someone from IndyCar ministries give the invocation and someone sang the U.S. national anthem and Mario Andretti said Drivers, Start Your Engines and away they went. 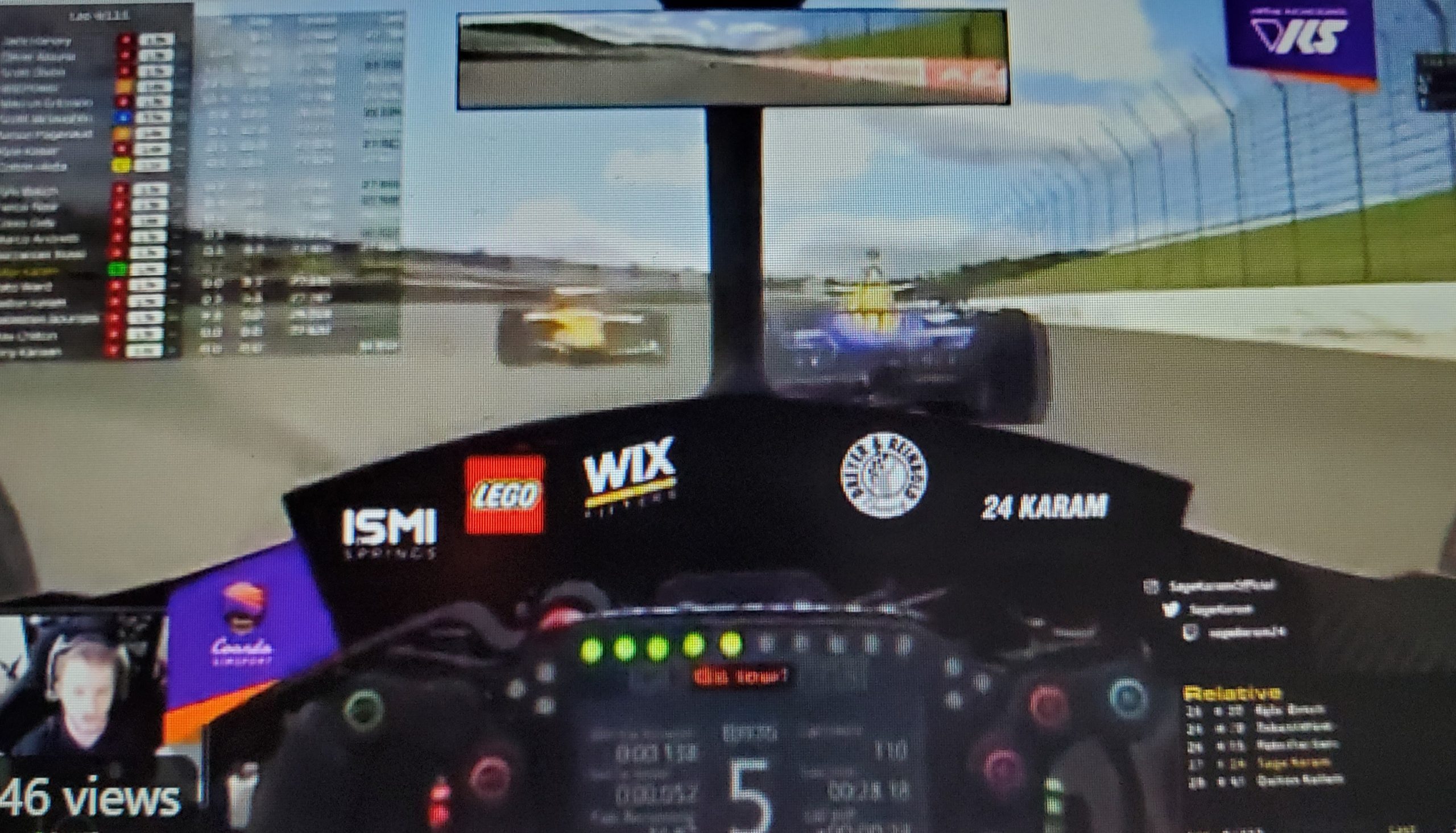 The usual three announcers – Leigh Diffey did the play-by-play and Townsend Bell and Paul Tracy provided the analysis and colour – were on the broadcast and it was a great presentation. NASCAR had their race Sunday with Rascal Flatts doing the anthem, Joe Gibbs delivering the invocation and Kelsey Grammar giving the command to start engines. Mike Joy and his sidekicks, Jeff Gordon and Larry McReynolds, did the announcing and it was all great fun.

Now, the season I say auto racing could be a saviour for all-sports stations is because it is very close to being the real thing. I don’t think baseball, basketball, football or hockey could come close. There was an F1 race on TSN5 Sunday (unlike IndyCar and NASCAR, not the real drivers; the best gamers, though) and on TSN3 they had a soccer game. The F1 race, which was held in the rain, which made it really interesting, looked pretty close to the real thing; the soccer game did not – it looked jerky and artificial. So racing won the matchup hands down. 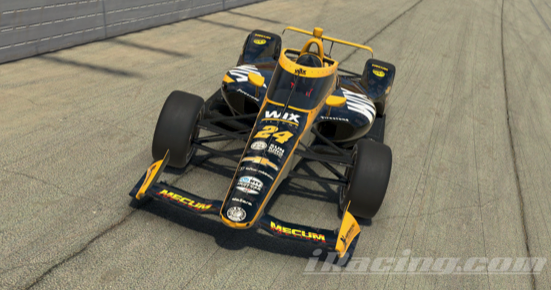 The one criticism I have about all this is that there is so much racing and it is all over the map. There are some Internet TV stations that are carrying series like the World of Outlaws while IndyCar and NASCAR are on network television. George Webster, who provides George’s Race Fan TV Listings for prnmag.com might consider trying to include some of these Internet sites beyond the iracing and eracing being shown on YouTube, plus the Road to Indy virtual racing that’s being telecast on MAVTV which, I believe, is on just about every cable system in Canada except Rogers.

Simon Pagenaud won his second virtual IndyCar race in two weeks when he finished first Saturday in the Twin-Ring Motegi “race.” Scott Dixon was second, with Will Power third. Robert Wickens of Guelph was fifth, after starting from pole while driving a sim equipped with hand controls. James Hinchcliffe of Oakville didn’t start. NASCAR star Kyle Busch finished 13th, 10 spots behind where Dale Earnhardt Jr. finished a week ago when he made a guest appearance.

(If Penske’s suggestion of the double-headers comes off, they should plan on a couple of IndyCar drivers racing in Cup and vice-versa, just to goose the interest. I will never forget a double-header at Las Vegas Motor Speedway years ago when the NASCAR truck series raced first and the CART cars and stars were the same-night second-race headliners. There was a big crowd for the trucks and then they all got up and left before the Indy car race. Don’t laugh, it happened.)

William Byron won his second straight NASCAR race, at a virtual Richmond Speedway, with Timmy Hill second and Parker Kligerman third. Nobody was fired this week (Kyle Larson’s big-league career ended last week when he uttered a racial slur and Bubba Wallace lost his virtual sponsor the week before when he quit a race in a huff) so it was a relatively tame affair.

Roger Penske, who’s led a charmed life in racing and in business as a result of hard work and good fortune, has suffered seriously bad luck for the first time. He bought the Indianapolis Motor Speedway and the IndyCar series and the coronavirus crisis just hauled off and punched him in the nose. I am not suggesting in any way that there is financial difficulty here but it doesn’t matter if you are Penske Corp. or American Airlines, your businesses, including your purchases, depend on cash flow and so far in 2020, there’s hasn’t been much.

I say this because Penske was on the radio the other day and said fans could look forward to a lot more IndyCar-NASCAR double-headers in future. One is already scheduled this year – the IndyCars will race on the same weekend as the NASCAR Xfinity Series, whenever that is able to happen and – according to Penske – there will be more in the years ahead.

The reason he’s saying this, of course, is because racing – like all sports – is going to face challenging times once people can go outside and maybe take in a car race or a baseball game. All sports will be right up against it (has anybody told the players the days of million-dollar monthly paycheques are over?) and so there will be fewer races for smaller purses. Other than the Indianapolis and Daytona 500s, most race weekends will have to offer at least twice the value in order for people to pay admission, sponsors to pony up and people to take a deep breath before attending an event where there will be a crowd. IndyCar and NASCAR Cup races on the same weekend might do it.

But it’s going to be a fight for survival, folks. Anybody who thinks this is going to end in a week or two and things will be back to normal soon should give their heads a shake.

Bob Lazier, who made the field for the Indy 500 in 1979, was CART Rookie-of-the-Year and the father of Buddy and Jacques (Buddy won the 1996 IRL 500 and Jacques gave me a ride at speed in the IRL two-seater at Phoenix International Raceway the very next year) died at the weekend. He was 81.

Townsend Bell inadvertently stepped in it on the weekend. While he, Diffey and Tracy are being paid to do those virtual races, the drivers are not. When this was brought to Bell’s attention, he suggested that somebody might want to set up a GoFundMe page and the money could be split among the drivers. That was on Twitter. Before long, critics were pointing out that millions of people have lost their jobs and the drivers are all playing on $40,000 simulators and the last people who need help are those guys. . . . .

Others are being paid during the shutdown, including team PR people. Ann Fornoro is the long-time communications guru for A.J. Foyt Racing while Tom Blattler represents Sage Karam and his sponsors, Wix Filters and Dryer & Reinbold Racing. In fact, photos supplied by Blattler are illustrating this column today.  And nobody is better than Ann Fornoro.

Oswego Speedway joined the long list of speedways and road-racing circuits cancelling races as a result of the COVID-19 crisis. The Jim Shampine Memorial races on the U.S. Memorial Day weekend were cancelled as were the Jack Murphy Memorial races on May 30.  “Home of the Supermodifieds” track co-owner John Torrese Jr. said management hopes to be able to promote races at the Lake Ontario oval in 2020 but only when it is safe to do so. . . .3