RACING ROUNDUP: Strange - ain’t it? – that some F1 teams go from zeroes to heroes

Briatore said Ferrari on pole good for business and all the rest of the news.

Join the Conversation (0)
Once upon a time, before Lawrence Stroll of Montreal bought Aston Martin, he and others, but particularly the driver, Sergio Perez, took ownership of the team called Force India. Everything looked good but there was one thing missing: they were hard up for cash.

They went out to qualify at Spa in 2009 and this woebegone outfit that started life as Jordan and then became Midland (owned by a Canadian), Spyker cars, Racing Point, and Aston Martin fired up. And lo and behold if Giancarlo Fisichella doesn’t go out there and win the pole. In more than 200 races, this team had won exactly nothing. They did manage to make it onto the podium six times but that was it. Oh, and that pole.

There was something happening at Canadian Tire Motorsport Park that weekend and I was sitting beside my friend from the Toronto Sun, Dean (the Dean of Speed). “Look at this?” I said.

This sort of thing doesn’t happen in F1 very often but, face it friends, it does. It’s happened in NASCAR and, some say, in IndyCar. The reason is money - usually. A team owner once kept a driver from winning a race because he’d been bribed to keep the car from finishing. And an owner made book on himself that he’d lead the first lap. And a team that had gone nowhere suddenly couldn’t be beaten and you have to wonder what was up there?

Ditto Ferrari at Bahrain this weekend. They had done nothing since 2019. Now they go out and blow everyone off. Charles Leclerc wins the race and Carlos Sainz Jr. was second. Lewis (Guess Who?) Hamilton finished third.

This has been a slice of life - with more than a little truth to it.

The master of this craft, of course, was Flavio Briatore, who was wheeling and dealing when he was in charge of the Benetton clothing stores and the same-named F1 team. He was a card. One time he was talking on television during Martin Brundle’s grid walk and he said: “And we have Ferrari on pole – which is always good for business.” That got people talking. Not in a good way either.

By the way, Briatore was at the race in Bahrain Sunday. Two Royal Family members – both daughters of the disgraced Prince Andrew – were also there. . . . . 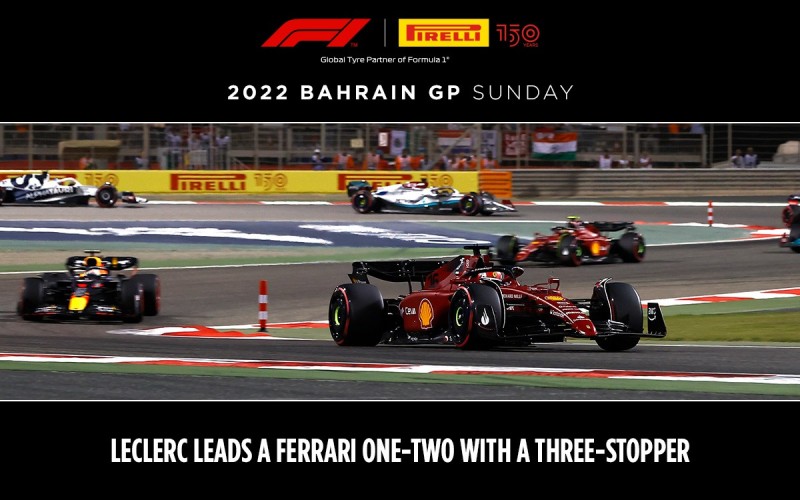 Why can’t F1 do things off the wall, like IndyCar and NASCAR? The F1 race started, the first car went to the pits, the second car, etc. And on and on. Our Nicholas Latifi is not having a good year. He finished nineteenth Sunday. So, let’s give him some help. Short fuel the car at the start. Go like hell on a lighter fuel load. Then pit and squeeze every bit of fuel into that car you can. Go has hard as you can with that full fuel load. Niki will not win that race but I guarantee he will finish not 10th. . . . .

Verstappen near stalled at the start but managed to keep going. Otherwise, he’d have been toast. . . . .

Two things I hate: the phrase race space, which means speed. And DRS, which is artificial. (Jimmy Clark used to have to work his way past an opponent; no DRS for him). . . .

When the race started, the announcers were gushing about how great this was of Haas and Ken Magnussen being near the front. And I think this is a subtle shot at Michael Andretti.

“It’s a shame we were not able to fight for points today, but we will benefit from completing our first race and understanding more about these new regulations,” Lance Stroll suggested. “It’s early days and there is lots to learn about how we can extract more performance in time for the race in Saudi Arabia next weekend. My initial impression is that it could be an exciting season of racing because it appears that you can follow cars more closely and today, I had some great battles with Albon and Schumacher.”

“It was a tricky day and it’s clear we’re not starting off as strong as we would have liked,” Nicholas Latifi said. “We’ve been lacking pace, struggling with overall grip, balance and tyre degradation, so we need to work out how we extract more out of the package we have now and have a real push to react as soon as possible to bring some more speed to the car.”

In the 12 hours of Sebring, Earl Bamber won the 70th Mobil 12 Hours presented by Advance Auto Marks. He was co-driving a Cadillac DPi with Alex Lynn. Antonio Garcia, Jordan Taylor and Nick Catsburg, driving a Corvette, drove a Corvette to win the GT PRO class. www.IMSA.com

When Josef Newgarden won the IndyCar race in spectacular style Sunday afternoon at Texas, he found himself one of 56 drivers who contributed to the Penske Racing’s 600 wins. Scott McLaughlin was second and Marcus Ericsson third. The real winner, though, was Jimmie Johnson. He finished sixth and that was really fine. www.INDYCAR.com

Here’s something. Mariaf Sharapova and Michael Schumacher have been charged with fraud as the result of a complaint. An Indian woman has accused the athletes of fraud for taking money for a housing project and then not building the project and keeping the money.