Racing Roundup: Still no Cockpit Protection for IndyCar drivers - Why?

There is too much not known about the condition of Robert (Robbie) Wickens of Guelph at time of writing to discuss specifically what happened Sunday at Pocono International Raceway.

The latest medical update from Schmidt Peterson Motorsports, at 10:42 p.m. Sunday night, states that Wickens is in hospital being treated for injuries to his lower extremities, right arm and spine and that he also sustained a pulmonary contusion.

We should all be thinking of him. The physical pain will be bad enough. It’s thinking about what the sport he loves has done to him that will be even harder.

Here are a couple of observations:

– The last time an Indy car left the ground the way Wickens’ did on Sunday was when Dan Wheldon died at Las Vegas in 2011. As his car flew off the ground, Wheldon’s helmet hit a pole holding up catch fencing. Wickens escaped that trauma, although his other injuries are severe.

Wickens was lucky. Face it. The same thing could have happened to him as happened to Wheldon. A halo or canopy quite likely wouldn’t have saved him from the injuries he sustained, but we’re not talking  about that. We’re talking about cockpit protection when an Indy car takes off.

F1 driver Jules Bianchi died after suffering a head injury when his car left the race track and hit a tractor/front-end loader during the 2014 Japanese Grand Prix. F1 acted. Although it’s ugly (I’m now used to it and don’t mind it so much), the halo offers protection to open-cockpit racers that wasn’t there before. It might have saved Bianchi’s life if it had been on his car.
The question today, then, is why are Indy cars still without halo-  or canopy-type protection? What is the problem? They dodged a real bullet at Pocono on Sunday. What are they waiting for?

Gilles Villeneuve and Greg Moore died racing. Scott Goodyear’s big-league career ended as a result of an accident at Indianapolis. James Hinchcliffe always seems to be getting hurt. He’s driving in the Grand Prix of Indianapolis and something pierces his face shield. Then he gets speared after hitting the wall at Indy and nearly bleeds to death. On Sunday, he was involved in the same crash that injured Wickens and debris smashed into his cockpit and cut his hands. Wickens, of course, should have been in Formula One and seemed destined to go to the top in IndyCar. Now he’s really bashed up. Thank goodness it wasn’t worse.

Compare this bad luck with that of the United States, where there are many more drivers and a longer racing season, particularly the further south you go. Remember: we’re talking about the top of the heap – the level of Formula One or IndyCar. I can only think of Dale Earnhardt, who died in NASCAR’s Daytona 500 in 2001.
This doesn’t mean anything – but I find it interesting.

For full details of the IndyCar race Sunday, won by Alexander Rossi, by the way, please click here.

One last thing: I don’t know why people can’t wait before shooting off their mouths on Twitter. Tony Kanaan sent out a Tweet: “Glad you are ok my brother @robertwickens. Couple Advil’s and I will see you in the gym on Tuesday.”
Huh?

The timing couldn’t be better for next weekend’s NASCAR Camping World Truck Series Chevrolet Silverado 250 race weekend at Canadian Tire Motorsport Park.
Not only do we have eight of the most talented NASCAR drivers ready to kick off the truck series’ Chase for the Championship – at least six of them are on their way to the Monster Energy Cup Series – but a spectacular young Canadian driver is among them.

On top of that, you have veteran Canadian racing driver Alex Tagliani, a perennial threat to mix it up with the truck racers, ready to take on the American invaders in a race-ready truck that’s to his liking. Tagliani told me a week ago that he is determined to win not just the truck race next Sunday but the Sunday morning feature race, the NASCAR Pinty’s Series race, as well.

The eight-driver Chase field is a mix of veterans and young guns. By virtue of his five “regular-season’ wins, Johnny Sauter is the top seed leading into the seven-race playoff, which will get under way at Old Mosport next weekend.

After Sauter comes Brett Moffitt, who has four truck series wins to his credit in his first full-time season. This is Moffitt’s first playoff appearance.

Ben Rhodes is making his second playoff appearance. He has won one race and has notched five top-five finishes.

Stewart Friesen is from Niagara-on-the-Lake and is making his first playoff appearance. A rookie in the trucks series, Friesen is best known as a big-block modified dirt-track driver. In his first season running full time in the trucks, he has seven top fives and 11 top 10s.

Grant Enfinger is making his first playoff appearance. He won a trucks race in 2016.

Justin Haley is making his first playoff appearance but is one to keep an eye on. He has one victory in the trucks but also races in other series and has won there.
Matt Crafton is a veteran truck racer who is making his third appearance in the playoffs. Strangely, he has not won a race this year but his steady performance all season earned him enough points to qualify for the Chase. He is a two-time trucks champion.

Thanks to Russell Branham of Talladega Superspeedway for providing much of this information.

The Chevrolet Silverado 250 will go to the post next Sunday afternoon. 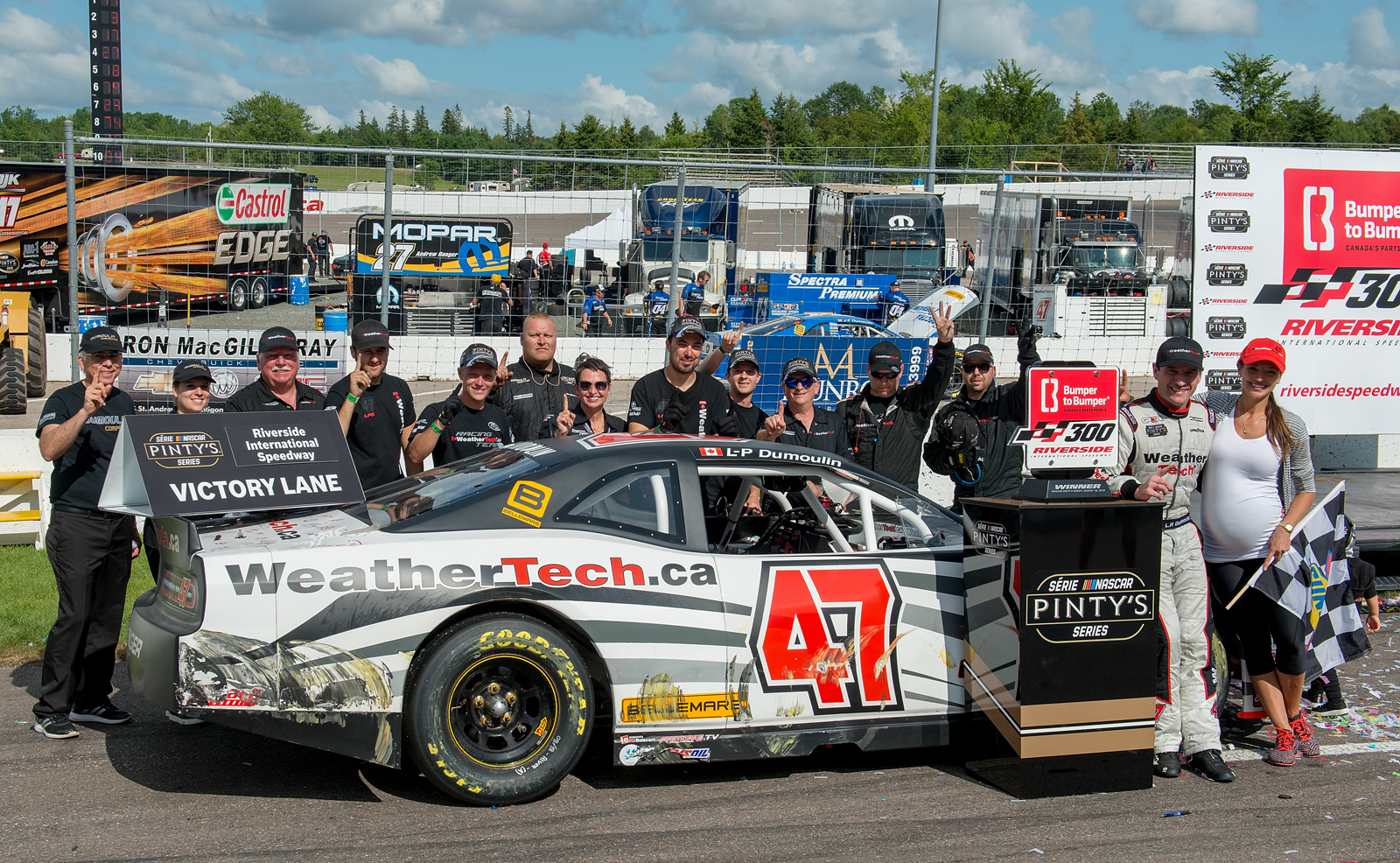 When the NASCAR Pinty’s Series takes the green flag for its race next Sunday morning, it will be its third race in three weeks, a run that started two weeks ago at Trois-Rivieres, Que., and continued this weekend at the Riverside Speedway in Antigonish, N.S.

When the dust settled Sunday, L.P. Dumoulin of Trois-Rivieres, had won his third race of the 2018 season. Dumoulin – driving the No. 47 Weathertech Canada/Bellemare Dodge – took the lead from Kevin Lacroix on Lap 240 of 300 and was never headed after that.

NASCAR Next driver Julia Landauer made her NASCAR Pinty’s Series debut and finished 15th after suffering mechanical issues on Lap 211.

Following his win at Riverside, L.P. Dumoulin has a 19-point lead over Powell. Tagliani sits a point behind Powell, and six in front of Camirand and seven in front of Kennington.
For complete Pinty’s Series statistics, please click here.

OTHER RACING, STARTING WITH ROBICHON 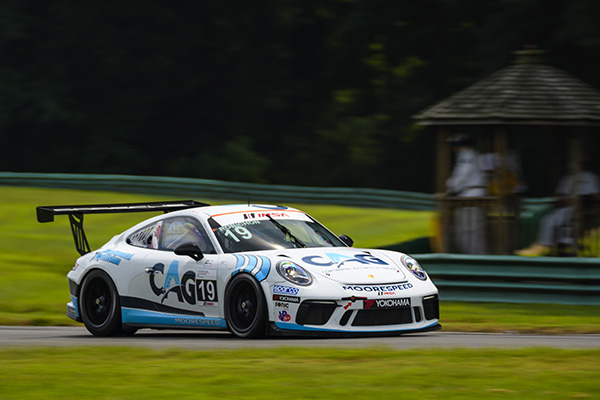 What more can be said about the performance these days of Ottawa’s Zachary Robichon? Whenever he climbs into a Porsche GT3 racing car, he wins whatever race he’s in. At Virginia International Raceway this weekend, he won both Porsche GT3 Cup Challenge USA by Yokohama rounds. Next up for Zach: two season-ending races in the Ultra 94 Porsche GT3 Cup Challenge Canada by Yokohama championship at Canadian Tire Motorsport Park, part of the NASCAR Camping World Truck Series Chevrolet Silverado 250 weekend. . . . . .

Fernando Alonso finally wins another car race and then his car gets disqualified. Toyota Gazoo Racing’s pair of TS050 hybrids that dominated the 6 Hours of Silverstone Sunday were both excluded from the results after failing post-race scrutineering. Alonso, Sebastien Buemi and Kazuki Nakajima had won comfortably, with their car and a second Toyota four laps ahead. The disqualifications moved Rebellion Racing’s Gustavo Menezes, Thomas Laurent and Mathias Beche to the win. . . . .

In GTA-area racing, Clayton Johns reports from Brighton Speedway that Mack DeMan of Mississauga didn’t hold back at all Saturday night when he started on the pole and led all 20 laps to earn victory with the Action Sprint Tour powered by RaceRivalz.com. Although it was DeMan’s first career start with the Action Sprint Tour, the veteran racer is no rookie as he is the all-time Crate Sprint Car wins leader at Ohsweken Speedway and recently graduated to become a 360 Sprint Car racer. DeMan also became the fourth different winner in eight series races this season. “It’s super cool,” DeMan said of the win in Victory Lane. “There’s so many talented drivers in this division.” . . . . . 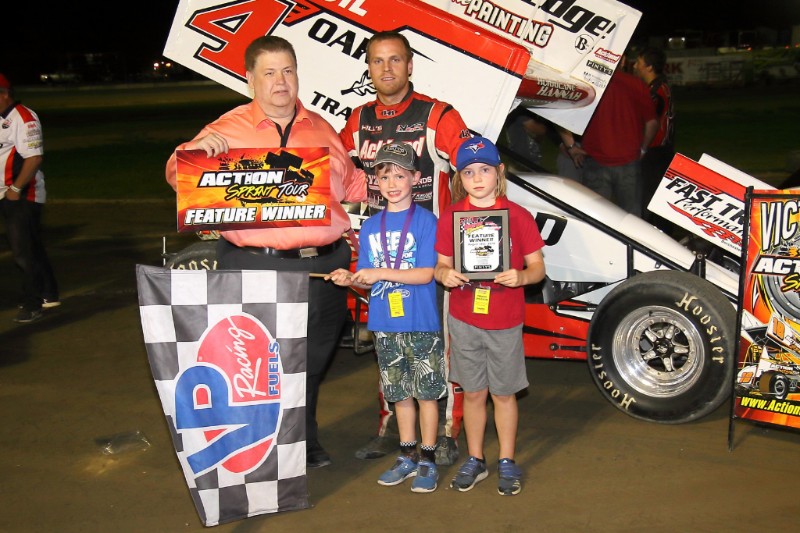 Talking about busy, Clayton Johns was on the job Friday night at Ohsweken Speedway on the Six Nations Reserve Another busy pit area had 111 cars signed in across four divisions for Jibs Action Sports Kids Race and Autograph Night featuring the Kool Kidz-Corr/Pak 360 Sprint Cars versus the Southern Ontario Sprints. Representatives from Kids Race were also on hand to distribute educational materials on behalf of the Canadian National Autism Foundation.

After the final checkered flags had flown, it was Scott Kreutter who grabbed his first career Ohsweken win in the Kool Kidz-Corr/Pak 360 Sprint Car versus Southern Ontario Sprints Feature and Shone Evans won the Strickland’s GMC Crate Sprint Car main event for the first time in 2018. For the stock cars, Dave Bailey claimed another win in the Middleport Mechanical Thunder Stock Feature while Kyle Wert won the HRW Automotive Mini Stock Feature. . . . . .