There was an announcement at the weekend that illustrates perfectly why the Monster Energy NASCAR Cup Series is not as popular as it once was.

Yes, I know Kyle Busch won the championship after finishing first in the last race of the season at Homestead-Miami Speedway Sunday (Martin Truex Jr., Kevin Harvick and Denny Hamlin were second-through fourth in that order), but what I am about to discuss is much more important.

The announcement is that Daniel Suarez will be replaced at Stewart-Haas Racing next season by Cole Custer. If you don’t think that’s important, you should.

When NASCAR was top of the mountain in North American motorsport, the field was populated by racing drivers who, regardless of the path they took, all got there because of their talent. Dale Earnhardt, senior and junior, Mark Martin, Jeff Gordon, Darrell Waltrip – the list goes on. They all – and I mean all – raced in Cup but then, in mid-week, or on an “off” weekend, would often be found racing against local drivers at short-track speedways all over the United States and, in some cases, Canada. Some of them still do this, but not many.

Some of them were grease monkeys when they started out (Jimmy Spencer) while others were more white-collar (Jimmie Johnson) but they fought and clawed and raced their way to the top and the fans knew this and appreciated it. And those same fans would look down their noses at IndyCar and (glancing toward Europe) Formula One and sniff that the drivers were only racing because they had enough money to buy the rides. And they were often right.

Back then, speedways that promoted Cup races were packed. They kept adding seats – Bristol being the prime example. The opening of the movie “Cars” depicted Bristol at its peak. Some speedways had waiting lists; people would leave their tickets in their wills. But then something happened: spectators started watching their money more as the threat of recession loomed; NASCAR refused to evolve (we’ve talked about this previously) and, most important, stock car racing went down the same road as formula car racing 40 years ago – as the old-guard drivers retired, they were replaced by a bunch of rich kids.

This has nothing to do with talent. Some of these young guys are loaded with talent. But they haven’t paid their dues in the way that blue-collar spectators expect they should and interest started to wane. NASCAR still rules the TV waves but those ratings have been slipping for years too.

Which brings us to Suarez and Custer.

The Mexican driver won the Xfinity Series in 2016 and was rookie-of-the-year twice, in Xfinity and the NASCAR Mexico Series. There might have been a little money behind him, but not much. In fact, when Subway pulled its sponsorship before the last Xfinity race of 2017, the owner of Camping World picked up the tab so Suarez could finish the season.

Custer, from what I can tell, hasn’t won anything, in that he’s won races but not championships or rookie titles. He came close this year – second – but it was still no cigar. His financial backing comes from Gene Haas, co-owner of Stewart-Haas Racing, whose president just happens to be Custer’s father.

It’s that sort of thing that will lead to NASCAR’s downfall. There’s nothing wrong with a father who’s involved in racing promoting and paying (or arranging for someone to pay) for his son’s racing. Tim Cindric, for instance, is president of Penske Racing. He’s bankrolled his son Austin’s stock-car career. But Austin has never raced for any of Penske’s teams. That should have been the case with Custer.

There is no easy answer to this problem. IndyCar and F1 fans – and sports car fans, for that matter – have long accepted this state of affairs. F1 has never suffered, particularly, and is the most popular form of spectator motorsport in the world. IndyCar, although prone to boast about miniscule improvements in attendance and TV ratings, is also on the way up (and will likely continue its ascent now that Roger Penske is the owner).

The question, then, is this: can NASCAR stem the bleeding before its fans accept that times have changed and that talent AND money is what counts. Or is this just another nail in the sanctioning body’s coffin? 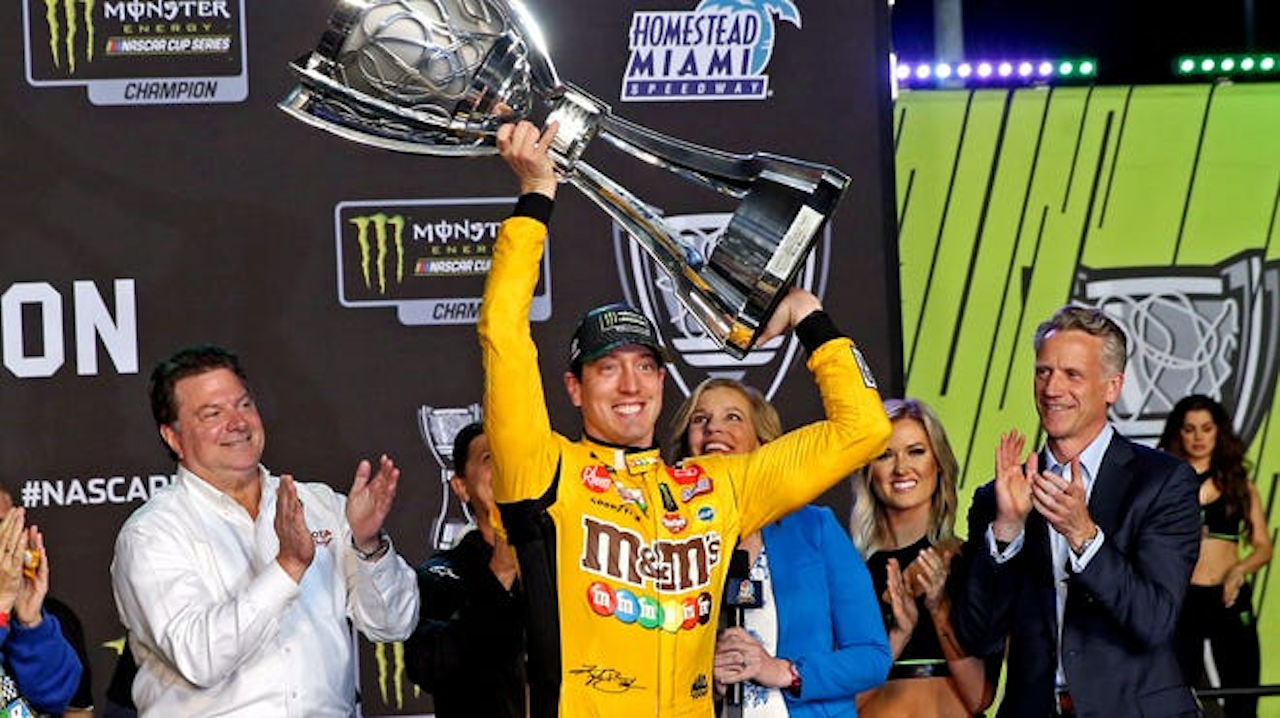 Veteran Matt Crafton won the 2019 Gander Outdoors Truck Series championship Friday night at Homestead. Canada’s Stewart Friesen came up short and finished fourth in the championship. It was still a terrific accomplishment for Friesen and congratulations to him. He should be in Cup, too. He can drive the wheels off race cars, is good looking, articulate and has a wonderful young family. Look for him to make the move in the not-too-distant future. For a full report on this season finale, please click here.

I am in Los Angeles covering the L.A. Auto Show and only saw bits and pieces of Sunday’s Formula One race in Brazil, which was won by Red Bull’s Max Verstappen with Pierre Gasly second for Toro Rosso and Carlos Sainz third for McLaren. Apparently, it was about the best race of the season (just my luck). Max was in control most of the way but Gasly scored his first podium in F1 and had to hold off a charging Lewis Hamilton to do it. Hamilton, who was on the podium for the post-race ceremonies, was later handed a penalty for driving into Alexander Albon and that elevated Sainz to third. And the two Ferrari drivers got into it again and both were knocked out of the race. For a full report on the Grand Prix of Brazil, please click here.

So there is one race to go, in Abu Dhabi in two weeks. I’ll write more about F1, Mercedes and Ferrari next week. In passing though: does anybody else find it a little curious that just days before Honda decides whether or not to continue in F1, Honda-powered cars finish first and second in a Grand Prix?