It’s IndyCar silly season (Norris floats some rumours) and all the rest of the news.

There have been bump-‘n’runs, metal assaults, post-race fights, all-out brawls, suspensions – just about everything you would expect at a NASCAR race – as a result of what happens at Turn Ten. The NASCAR Pinty’s Series stock car race, which usually precedes the main event, the Chevrolet Silverado 250, is usually pretty quiet in comparison.

Not Sunday. The Gander Outdoors Truck Series race was straightforward from start to finish. No finger-pointing, no nothing. The Pintys race, though, had fireworks, with post-race finger-pointing, accusations of intimidation and suggestions that what had been started wasn’t over.

Here’s something that’s important. For years, it’s been suggested that the Pinty’s series had depth superior to the trucks. In short, it’s tougher to race the Canadian stock cars than it is to race the trucks. Before Sunday, that could be considered theory. Sunday’s racing proved it.

For starters, Brett Moffitt won the Chevy Silverado race in a – natch – Chevy Silverado. Canadian Alex Tagliani of Montreal was second in a Toyota and truck-series regular Ben Rhodes was third in a Ford.

The truck race was so tame, as compared to other years, that Moffitt won it by 5.160 seconds – a mile by road-racing standards. He led 45 of 64 laps and was never really threatened or even pushed.

Stewart Friesen of Niagara-on-the-Lake, a truck-series regular, finished seventh but held on to third place in the seven-race NASCAR playoffs after two races. Friesen crashed his primary car during practice on Saturday and had to go to his backup.

By winning the race Sunday, Moffitt extended his lead in the post-season standings. The next race is at Las Vegas Speedway in September, at which time two of the eight drivers who have qualified for the playoffs will be eliminated.

Kevin Lacroix of Saint-Eustache, Que. (pictured above), won the NASCAR Pinty’s Series stock-car race earlier Sunday by “moving” Tagliani out of the way at that famous last corner. Marc-Antoine Camirand of Montreal was second and J.F. DuMoulin of Trois-Rivieres finished third in the TOTAL Quartz 200. 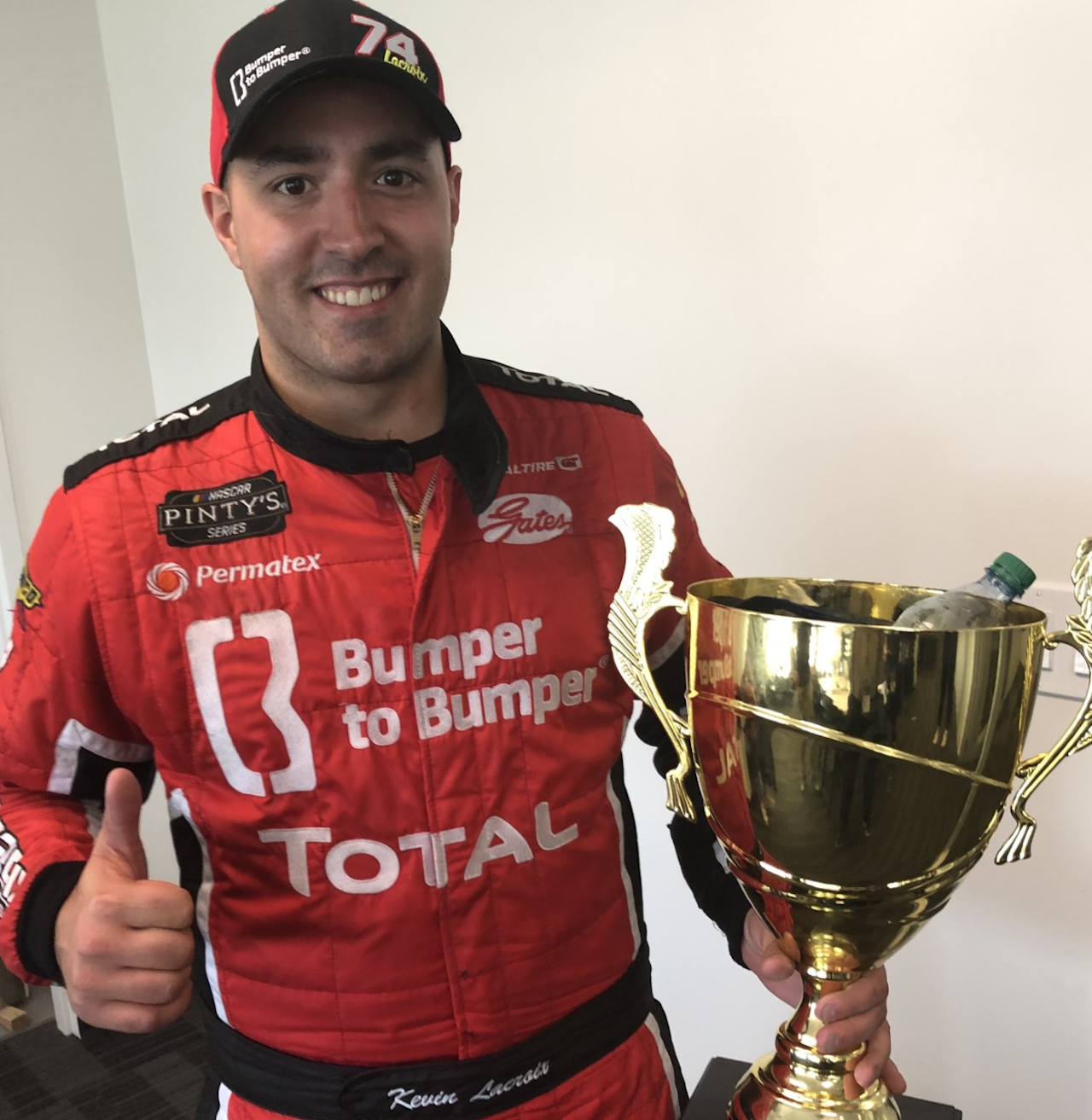 Tagliani, who finished fourth and came into the weekend with hopes of winning both races, was not pleased with the move and said afterward that Lacroix’s father had been vocally aggressive toward him on Saturday.

“He told me that if I touched any part of (son Kevin’s) car that I would not be able to drive in the truck race because he would (hurt) me – and then his son goes and does that to me.”

Tagliani added: “I’m a five-foot-six guy and I’m definitely not a fighter. I don’t fight.” (He must, in the heat of the moment, have forgotten coming to blows with Paul Tracy years ago – but then Tracy’s not really a fighter either. . .)

Tagliani, a veteran IndyCar driver who now races full-time in the Pinty’s Series, sent out a warning of his own, suggesting that there are still three races left in the season and that he would remember what Lacroix had done.

“I was sorry it was Alex,” Lecroix said. “I didn’t like to do that but . . . he did it to me two years ago in Edmonton, so what goes around comes around.”

Both drivers agreed it would be a good idea if they sat down and talked about it.

The win by Lacroix, though, and bad luck suffered by series leader Andrew Ranger, left the two of them tied for the points lead when the checkers flew.

Lacroix’s led the first 20 laps in his No.74 Bumper to Bumper Dodge before calamity struck. Lacroix made an unscheduled pit stop, pushing him down the order and over 10 seconds back from the leaders. But the Saint-Eustache driver took advantage of restarts to fight his way up to front. A late race accident set a up a NASCAR Overtime finish, with Lacroix bumping Tagliani out of the way. Tag caught the winner on the cooldown lap at Corner Four and bumped the winner off the track.

“Andrew Ranger had some bad luck and it ties us heading into the next three races,” Lacroix said. “That’s going to be an exciting end of the season. We’re really looking forward to the last few races, I’m really confident but I know Andrew is going be good there too so we have to keep up.” 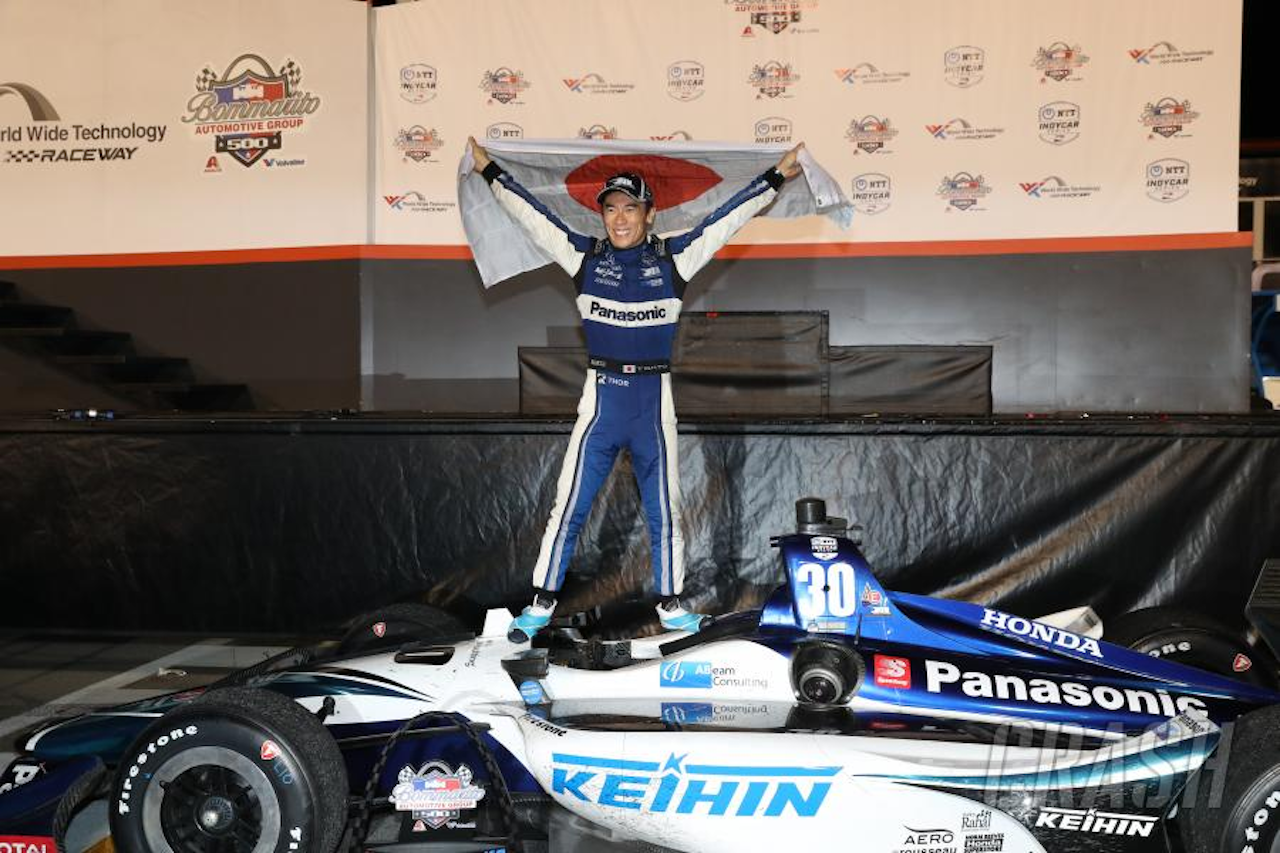 A week ago, at Pocono International Raceway, Takuma Sato was blamed for causing a pileup that eliminated five NTT IndyCar Series cars. In the week that followed, Sato defended himself, as did his team, Rahal Letterman Lanigan. Saturday night in St. Louis, he won the Bommarito Automotive Group 500 at Gateway International Raceway, the last oval race of 2019, and – in so doing – pretty much said to everybody who’s taken a shot at him over the last seven days, “@%$#&% @#$@%&$.”

Of course, Sato would never say anything offensive like that, being a polite Japanese, but I bet he was thinking it.

Ed Carpenter was second and Tony Kanaan was third, scoring his first podium for A.J. Foyt Racing since joining the team. Please click here for a complete story about the race.

Here are a few Notebook Jottings:

Seems like Colton Herta is yesterday’s flavour-of-the-month already. Until this weekend, it was all “Colton, Colton, Colton” on the Internet and Twitter. Now it’s “Santino, Santino, Santino” as Santino Ferrucci turned heads with a head’s-up race to finish fourth. He didn’t have a fan in Josef Newgarden, however. Ferrucci tried to pass Kanaan on the last lap and had to back out, his car running up the track. He regained control but drifted down into the groove and nearly ran into Newgarden, who spun to avoid a collision and wound up seventh instead of his expected fifth.

Driver of the race, other than Sato, was Conor Daly, who went from 18th at the start to sixth at the finish. You got the feeling that Daly, who’s had a series of one-offs this year, has always been told: “Don’t crash the car.” Saturday night, he either decided to let it all hang out or else the team, Carlin Motorsports, told him to go for it. He was great on the oval, sticking his nose into holes that really weren’t holes and forcing his way to the front. Daly proved Saturday night that given the car and the support, he can be a regular top ten driver.

Scuttlebutt has the aforementioned Herta moving to Andretti Autosport next year, which would mean five Andretti team entries. The car count would be a wash, with the Steinbrenner team going out of business and Steinbrenner moving to Andretti with young Herta. (Didn’t I hear a rumour that Herta was being coveted by the new McLaren IndyCar team, who were so keen on him that an F1 test might even have been part of the deal? Maybe now we’ll hear that Zak Brown is keen to sign Santino. . . . )

Since its Silly Season, I will now start two rumours. My friend, Jeff Pappone, thinks James Hinchcliffe – who finished 12th Saturday night – will race next year for Andretti, replacing Zach Veach. I don’t think so. With Steinbrenner going out of business, and Schmidt Peterson Motorsports being dissolved at the end of 2019 (Sam Schmidt says McLaren has bought all its own equipment), the infrastructure is there for a new team. I suggest Hinch and Ric Peterson will team up and launch Hinchcliffe Peterson Racing with primary support from Honda. Unless, of course, HInch races for McLaren and then we’ll both be wrong.

Kyle Marcelli of Barrie and his partner Nate Stacy won the IMSA Michelin Pilot Challenge race Saturday at Virginia International Raceway. Another Canadian, Jesse Lazare of Toronto, was winning but was spun out by another car. . . . . Canadian Dean Baker and Kyle Masson won the IMSA Prototype Challenge at VIR. . . . . . In U.S. Porsche GT3 Challenge action, Roman De Angelis of Windsor finished second in the Saturday race and fourth on Sunday. It was the first time this season that he missed the podium but still holds a 58-point lead in the championship with four races remaining. . . . . At Ohsweken Speedway Friday night, Dylan Westbrook won the Corr/Pak 360 sprint car race, D.J. Christie was first in the crate sprints, Jonathan Ayrton won the mini-stock feature and Dave Bailey won the $2,000-to-win Thunder Stocks feature. . . . . . At Road America Saturday afternoon, Christopher Bell won the NASCAR Xfinity Series race, with Austin Cindric second and Tyler Reddick third. . . . . . The NASCAR Monster Energy Cup series was off this weekend but will return to action next weekend at Darlington Raceway . . . . . . Eli Tomac finished his Motocross 450 class championship season Saturday night by winning the season-ending TACYC Stability Cycle Ironman National. . . . . . Skylar Gee of Whitehorse, Yukon, son of World of Outlaws Canadian regular Tim Gee of years past, won the All-Star Circuit of Champions race Saturday night at Lincoln Speedway in Abbotstown, Pa. . . . . .