Racing Roundup: Penske has a surprise in store for Detroit

The news that Penske Corp. is seeking to move its highly successful Grand Prix IndyCar race from Belle Isle to downtown Detroit is not surprising, but it did contain one surprise.

Here’s the surprise. And it’s a big one,

The Grand Prix course, as presented, would let most of the spectators watch the race for free. You would only have to pay admission if you wanted a grandstand seat along pit road or you are a sponsor and wanted to rent a suite.

The city thinks this is swell because why pay a race admission if you can watch the action gratis and use the money saved to stay in the hotels of downtown Detroit and eat and drink in the bars?

But while this might be a wonderful marketing move on behalf of the race and the city, I wonder how people who promote races through other city streets – like Toronto, for instance – will feel about this? I can already hear people saying how come they have to pay to watch the IndyCar race in Toronto when, just a few weeks previous, it didn’t cost them a cent to watch the same cars race in Detroit?

It’s one thing to be a financial Goliath like Penske Corp., which owns the series and can afford stunts like this, and the two guys who promote St. Pete, Toronto and Portland and don’t. It would be fun to be a fly on the wall at the next IndyCar promoters’ meeting and listen when Mr. Penske is asked for an explanation.

Meantime, here is what is not surprising.

Following the race riot of 1967, the majority of the white population left the city for the suburbs. Downtown Detroit ceased to be a tourist destination. It has been clawing its way back ever since. Nicknamed the Motor City, auto racing has always been welcomed, starting with the dirt Indy cars at the Michigan State Fairgrounds and continuing with Formula One street races and then Indy cars.

But when Roger Penske wanted to promote his first Indy car race, downtown Detroit was still a bit dicey. Enter Bell Ilse, which also had seen better days but had potential.

In the beginning, the idea of an IndyCar race on an island in the middle of the Detroit River didn’t bother anybody. Belle Isle, back in the day, was not a place where people held a family picnic. But Penske, who’s been rebuilding Detroit along with two other entrepreneurial millionaires, decided it was one of the places he’d like to spiff up. And, naturally, he’d promote a race out there. Since that first race, in 1989, its estimated that Penske’s invested somewhere in the vicinity of $18 million to make Belle Isle the attractive place it’s become.

Meantime, the sons and daughters of the people who left Detroit in the ‘60s are back. And they ride bicycles. Detroit is a big cycling community – at least the downtown part it – and before you knew it, this crowd started complaining about a car race on Belle Isle which had become a place where they liked to cycle on weekends.

So a place where nobody really like to cycle was made livable by a guy promoting a car race and now the cyclists wanted it, They have been warming up for a confrontation for several years now, so it was only a matter of time before Penske either cancelled the Detroit Grand Prix or moved it.

His proposal to move the race downtown is a direct result of the above. If Detroit city council say yes to the proposal, the race does downtown. If not, there are two years remaining on the current contract and the last race on Belle Ilse would be held in 2023.

I suggest the race moves to the streets of the city. When it comes to anything, but particularly Detroit, it’s not wise to bet against Roger Penske

Simon Pagenaud, who lost his ride with Penske Racing at the conclusion of the season, has joined another ex-Penske reject, Helio Castroneves, at Meyer Shank Racing for the 2022 season. Both are Indianapolis 500 champions – Castroneves won four times (although Paul Tracy would say it was three) – and Pagenaud, who’s also a sports car racer of note, won the IndyCar championship in 2016. It’s rumoured that Norman Pagenaud also has a contract. . . . . .

F1 refugee Romain Grosjean has left Dale Coyne Racing (a mistake, some say) to join Andretti Autosport, where he and Alexander Rossi will be co- No. 2s in the lineup behind Colton Herta. Devlin DeFrancesco of Toronto and Ford Lauderdale will be the fourth driver, taking over the seat occupied by our James Hinchcliffe. Hinch was in Vancouver this past week to officially announce the Formula Electric race and festival that will take place there next Canada Day weekend. Andretti owns a Formula E team. Is it possible that James and Andretti protégé Kyle Kirkwood, who’s dominating this season’s Indy Lights championship, might share an Andretti Electric car next year? . . . . .

Sebastien Bourdais, who’s paid to race for A.J. Foyt Racing rather than paying, will race IMSA sports cars next season with the occasional IndyCar race thrown in. . . . . . 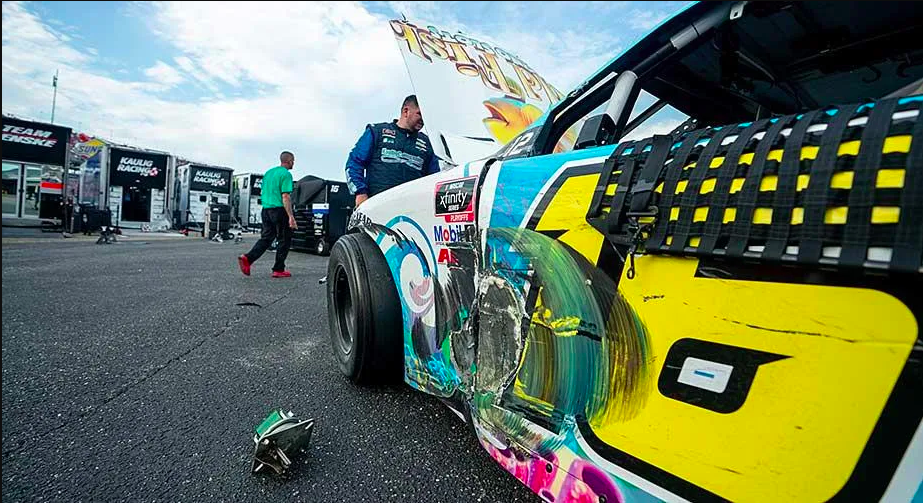 Here’s stupid for you. Apparently (I didn’t see this; just read about it), FOX Sports left the conclusion of the NASCAR Camping World Trucks series race Saturday without interviewing the winner. Social media went nuts. Seriously.

Now, the reason TV didn’t interview the winner is because he was in an ambulance being taken to the infirmary.

Coming down to the checkers, Tate Fogleman – who had never before won a nig league trucks race – collided with John Hunter Nemechek, who’s famous in these parts for running Cole Custer off the track at Canadian Tire Motorport Park in order to win the Chevy Silverado 250 in 2016.

After the collision with Nemechek, Fogleman hit the wall and had to be taken to the infield care centre for a checkup. That was when FOX, which normally would have done the interview, went to a football game.

Later, Fogleman said he was very pleased that he’d won the race. Nemechek, meantime, was trading insults with Matt Crafton, with whom he’d had a run-in. “He’s an old man,” said Nemechek. Said Crafton, after hitting Nemecheck in the butt, hard, said: “What comes around goers around.” I know Crafton. Nemechek would be wise to keep his head up.

Jason White of Sun Peaks, B.C., didn’t finish after his truck gave up the ghost during the tenth lap

In the Xfinity Series race that followed the trucks race, Brandon Brown won his first race that was called for – wait for it – darkness. NASCAR called the race on Lap 107 of the scheduled 113 because it was too dark for the drivers to see properly. Brown followed a pace car across the line to take the checkers. Brandon Jones and Justin Allgaier made up the rest of the podium.

Brown was so excited that he told the crowd, “You can ask my neighbours . . . I did plenty of burnouts to practice for this moment.”

The Cup race was cancelled because of showers. NASCAR tried to get the race in but the intermittent precipitation meant that if they did get a green they would run out of sunlight before the checkers. One a weekend could be explained; two couldn’t. The race will go to the post Monday at 1 p.m. on TSN. 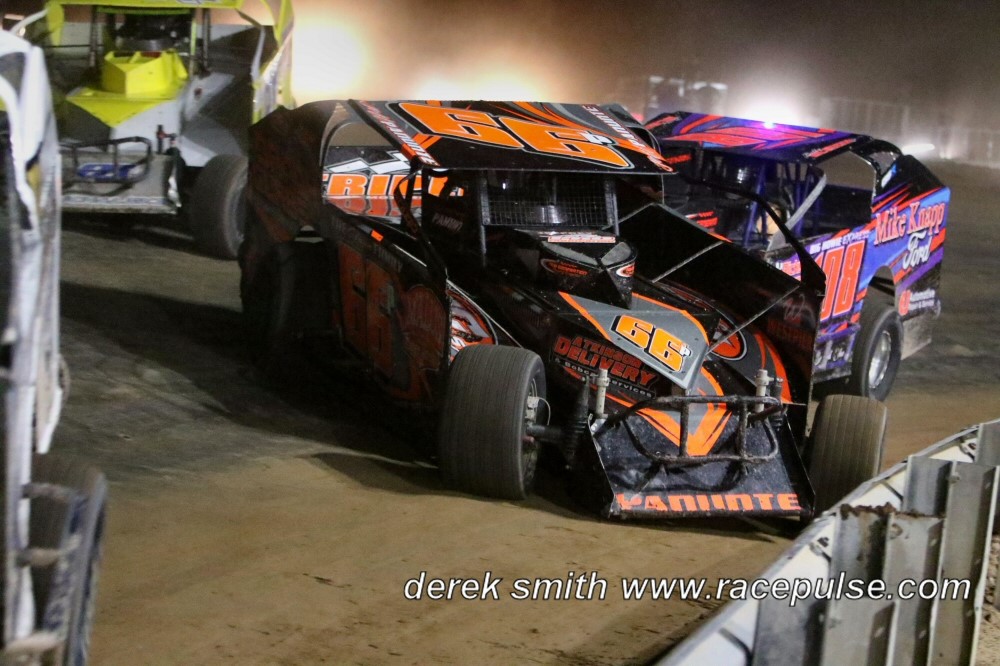 The end of the season is approaching and only a few open competitions remain. One of the most famous is the Autumn Colours Classic that will be held Oct. 8-10 at Peterborough Speedway followed by the Northeast Fall Nationals (Oct. 15th and 16th) at Brockville Speedway. Both are gatherings of the clan – Peterborough for the pavement racers and Brockville for the dirt track stars.

In the Action Sprint Tour, Jacob Dykstra was the winner, Lucas Smith was second and Allan Downey was third.. The Sportsman feature was won by Brad Rouse while Pete Reid won the Thunder Stock Main.

Thanks to Derek Smith and Ashley McCubbin for the results.

The B.C.-based Avion Motorsports organization announced its 2022 schedule that will start June 4 and end Sept. 17 at the beautiful Area 27 road course in British Columbia. Two race meets will be held at the renovated Penticton Speedway and a trip to the Wyant Group Raceway in Saskatoon will mark the first meet held outside B.C. Three items of note: 1, Avion builds all the cars to confirm to an equal formula so that race wins depend on driver skill. 2, there are two divisions – RS1 Cup for elite drivers and Challenge for beginners and veterans. 3, The RS1 Cup champion will win a fully funded ride in the 2023 NASCAR trucks race at Martinsville Speedway. Good stuff.

NOTE: I will be travelling next weekend to road test a car and will be unable to provide a Racing Roundup. It would have been a short week anyway. Happy Thanksgiving.