Racing Roundup: One lap of Honda Indy Better Than a Season of F1

The 34th Honda Indy Toronto is in the rear mirror now and, in the calm light of a Monday morning, it’s time to take an evaluation.

The opening lap of Sunday”s race was better than any of us will see in a season of Formula One racing – and I’m an F1 fan.

That lap left everyone gasping – and most of the other 84 laps were like that in their own way.  Even when the race settled down near the finish, there were still battles going on somewhere out on the circuit.

Scott Dixon won that Honda Indy, with Simon Pagenaud second and our own Robbie Wickens – now officially known as Wicky – third. James Hinchcliffe was fourth. A great day for Canada.

Here is a link to my story on the race: please click here.

I could go on, but I won’t. If you were there, you know. If you weren’t, you missed a fantastic race played out in front of a packed house. You can’t get anything better than that.

One last thing. Leigh Diffey, the play-by-play announcer on the NBC Sports Network, said Wickens came from “Gelf,” instead of Guelph. Can’t blame him – I wouldn’t know how to pronounce the names of half the towns in his country.

But Paul Tracy was sitting right next to him in the booth and didn’t correct him. It took people on Twitter to bring it to his attention. 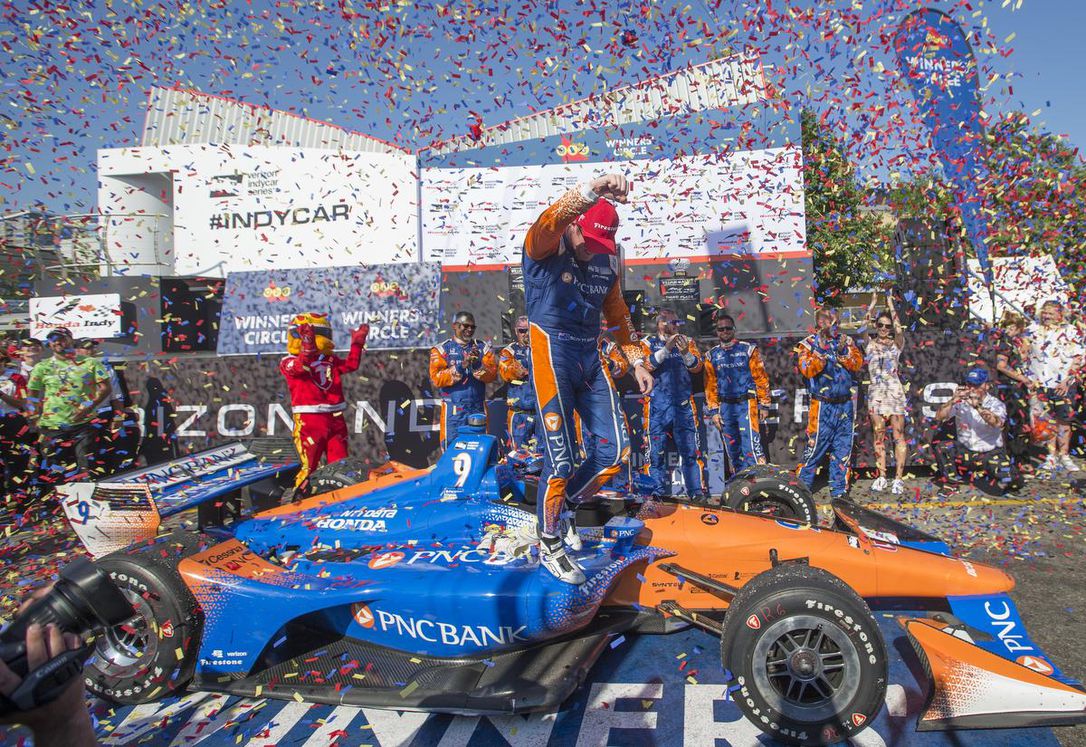 There was a story floating around this weekend to the effect that attendance at the Honda Indy isn’t what it once was.

I can hardly wait for the reporter for the national wire service who wrote that story to write another one, this time about attendance dwindling at the annual Caribbean Festival, a.k.a. (originally) Caribana, which is going to be held in a few weeks and is a shadow of its former self.

Be that as it may, the timing for such a story about the Indy couldn’t have been worse. The crowd Sunday was a Molson Indy crowd that at least one person in that wire service story talked about being the benchmark.

Now, Toronto is a town where attendance at anything is routinely inflated to be non-believable. And yet the media, including the national wire service that distributed the Indy race attendance story, routinely report this fiction as gospel.

The Gay Pride Parade attracts a million people, they say. This is mathematically impossible. The Taste of the Danforth, ditto. And the Caribbean Festival, too. A million people attend those things, their PR people say.

There are, according to the signs on the highways coming into town, about 2.5 million people living in the city of Toronto. Does it ever cross the minds of the people writing that drivel, and the people reporting it (the newcasters, DJs, news editors, etc.) that for a million people to be at anything in this town means that every second (okay, every 2.5) man, woman, child and dog has to be there?

To make it even simpler: there are a million people living in Mississauga. Every living being in Mississauga would have to attend any of those events for those figures to be true and Mississauga would be a ghost town. But does that matter? Apparently (when it comes to media counting attendance) not.  Anyone with an ounce of intelligence would know that. But still it goes on, year after year.

It is interesting that the only parade/festival that goes on in Toronto that doesn’t make a big deal out of attendance is the Santa parade and, if truth be known, it is the biggest.

All Eyes on ‘Team Canada’ as IndyCar Season Starts

The health of anything, but particularly an international racing series, is judged by the hospitality provided by the participants.

When Indy car racing first came to Toronto in 1986, hospitality was the name of the game. The racing teams of the day would entertain their sponsors and clients with flights, hotel rooms, meals, transportation to and from the race, suites at the circuit where they could watch the race and enjoy a snack and a drink, and so-on.

This happened at all the races, not just Toronto, but since this sort of spectacle was new to our city, it was noticeable.

The recession of the early 1990s and the CART-IRL IndyCar split in the mid-90s brought all that ostentatiousness to a halt. There was still some form of at-track hospitality, but it was usually just basic lunch.

Following the reunification of IndyCar in 2008, the hospitality tents returned to the IndyCar paddock. Again, usually just lunch was provided invited guests but this sort of thing was once again part of the scene.

Hospitality tents were noticeably missing in Toronto this past weekend. Except for the IndyCar Series itself, Andretti Autosport and Rahal Letterman Lanigan Racing – oh, and Team Penske – the hospitality area was, in a word, empty.

This is not a good sign. You would think that because this is the only non-U.S. race in the series, teams, if not rewarding sponsors and guests for their involvement, would use the opportunity, and consider it money well spent, to use hospitality in an effort to attract future sponsorships and partnerships.

Toronto is the economic capital of the country. This is where all the money is. You would think these racing teams would know that. That they don’t have the money to go after more money is even more concerning.

Every time you turn around, people in IndyCar are telling you how wonderful things are. If hospitality units are a barometer, that is just not so.

Okay, before I leave the Honda Indy subject, I have to say something.

The people who run this race are very sensitive about what’s reported. In many ways, they look to media, be it “old” media or “new,” to not only support the event but promote it. They want respect.

But this has to work both ways. Reporters aren’t owed anything by a sports team or a political party but if something has been provided every year – in the case of the Toronto Indy –  since  1986 and then suddenly isn’t, it’s surprising and disconcerting.

If promoters or organizers want respect from media, they have to show respect. And I’ll just leave this at that.

With the championship points gained,  Ranger also moved into a tie for the lead in the series title fight.

Ranger has had good luck in Toronto. He’d won two previous Pinty’s races and was in position to win a year ago before crashing. Saturday’s victory was a real test and Ranger – who’s career has taken him through Toyota Atlantics and the Champ Car Series – passed it with flying colours. 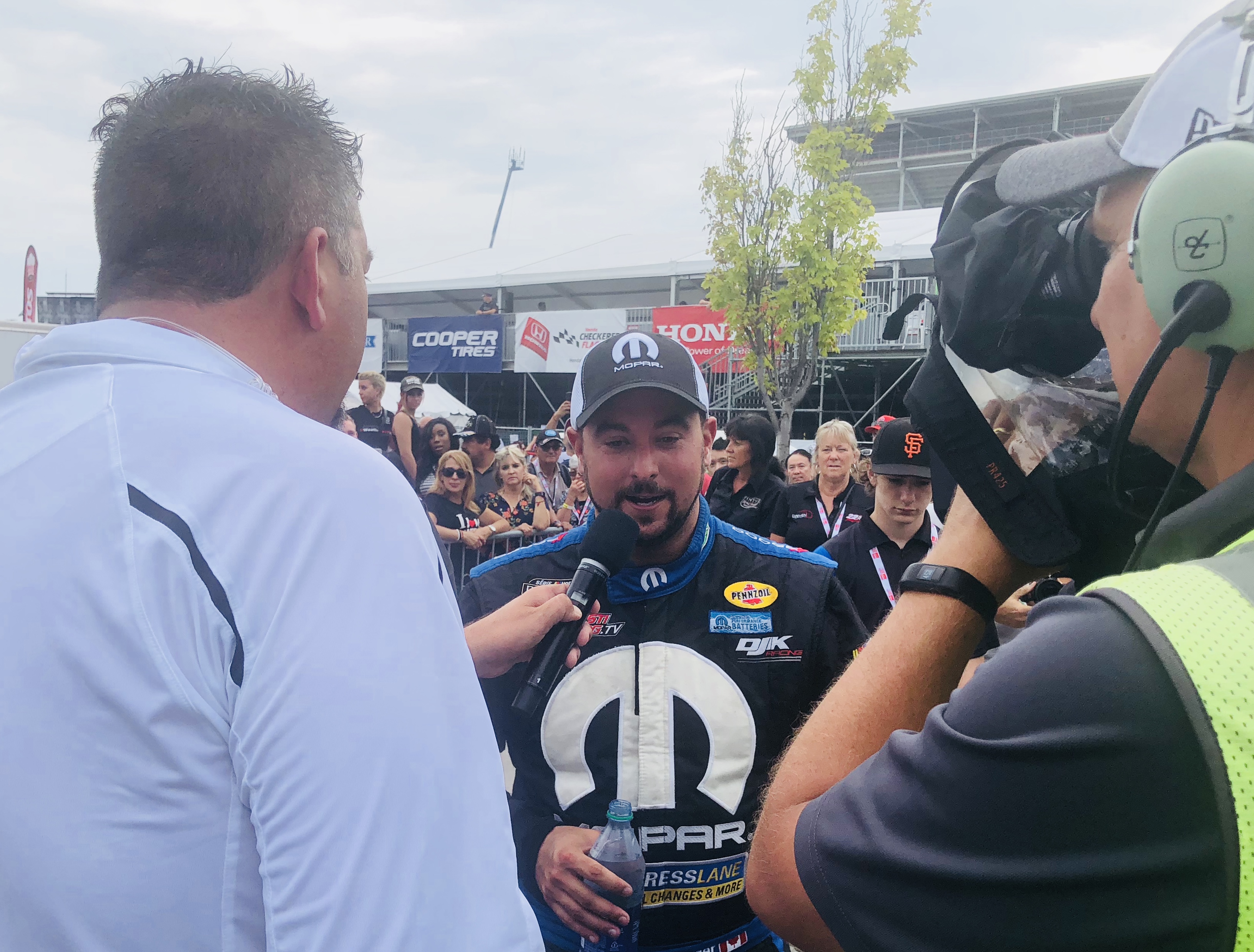 Polesitter Alex Tagliani led from the drop of the green flag until being passed on Lap 36, the first lap of NASCAR overtime. Tagliani battled hard with J.F. Dumoulin and wound up finishing second, notching up his second podium finish of 2018.

The series will now head for western Canada on July 25th at Wyant Group Raceway in Saskatoon, Sask.  The race from Toronto can be seen on TSN Sat., July 21st, at 2:30 p.m. ET.

The International Supermodified Association ran the Queenston 50 at Cayuga`s Jukasa Motor Speedway on Saturday night and Dan Bowes was the winner, with Jon McKennedy second and Johnny Benson Jr. third. Mark Sammut of London finished sixth and Mike Lichty of Kitchener was eighth. Dave McKnight of Brampton, driving Gary Morton`s No. 70 out of Stouffville, had mechanical problems and didn`t  race. The supers will be back at Delaware Speedway near London in August. Let`s hope they have more cars than the 15 that showed up. The supers, by the way, are rockets. How about a 150-mph average on a five-eighths-mile speedway? Now, that`s motoring . . . . . Martin Truex Jr. won what can only be described as a boring Monster Energy NASCAR Cup race Saturday night at Kentucky Speedway. Ryan Blaney finished second and Brad Keselowskiwas third. . . . . . Late model dirt track racer Scott Bloomquist won his 600th career victory Saturday night. My only question is: what is he doing racing? Ninety day suspensions sure must go quickly in that series  . . . . . Veteran Mark Wilkins of Toronto  used traffic as an ally Saturday at Portland International Raceway to score his third Pirelli World Challenge TCR feature win of the season in the 58th Rose Cup Races. . . . . . Ace PR man Clayton Johns reports that 114 cars signed in across four divisions at Ohsweken Speedway Friday night for Sponsor and Kids Bike Night presented by Strickland’s GMC. Thanks to the support of dozens of race teams, 72 bicycles were given away to lucky junior fans in attendance. The drivers and teams were also able to treat a number of their sponsors to a complimentary night at the races. After the final checkered flag had waved, it was Dylan Westbrook claiming the Kool Kidz-Corr/Pak 360 Sprint Car Feature win from the pole and Jacob Dykstra who grabbed his first career Strickland’s GMC Crate Sprint Car win. For the stock cars, Lee Winger won the Middleport Mechanical Thunder Stock Feature and Dusty DeBoer collected the checkered flag in the HRW Automotive Mini Stock main event. . . . . . Jean-Eric Vergne picked up his fourth win of the season at the final race of the 2017/18 ABB FIA Formula Electric Championship in New York. Vergne fended off pressure from the outgoing title-winner Lucas di Grassi in a fight to the flag. The pair were nose-to-tail for the majority of the second phase of the race, with di Grassi eventually settling for second place alongside his team-mate Daniel Abt who finished third. The double podium finish and di Grassi’s seventh in as many races sealed the teams’ title for Audi Sport ABT Schaeffler. (Boy, I bet you’re happy I reported this, aren’t you?) . . . . . Zach Robichon proved his skill yet again Sunday afternoon at the Honda Indy Toronto, topping the Ultra 94 Porsche GT3 Cup Challenge Canada by Yokohama field for the seventh time this season. Piloting the No. 98 Mark Motors Racing Porsche, Robichon took home both Porsche GT3 Cup Canada wins over the course of the three-day event weekend. . . . . .  Sébastien Clark and Yanick Marin, in their Subaru WRX STI, won the fourth round of the 2018 Eastern Canadian Rally Championship (ECRC), the Black Bear Rally, at the weekend. The rally was held on roads in the Catchacoma region, north of Peterborough, for the first time.

The checkered flag, racing`s most iconic image, has been combined with the world`s most recognized symbol of inclusivity to create the Formula Everyone flag that promotes LGBTQ+ tolerance in motor sport.

You Can Play, an organization dedicated to equality for all athletes regardless of sexual orientation or gender identity, was invited by Honda Indy organizers to share the flag and to promote inclusivity in motorsport at the event. 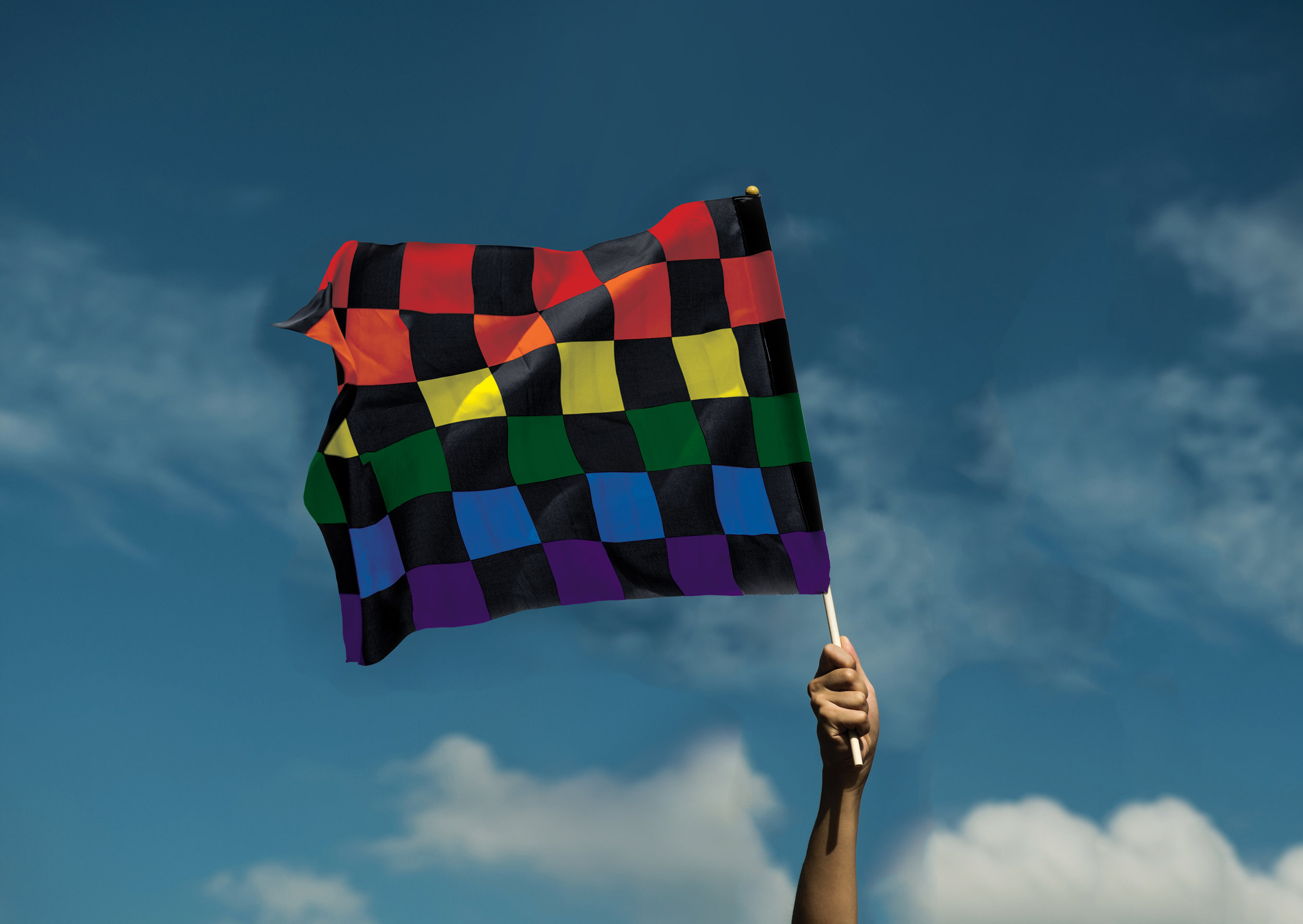 Believe it or not, the 2018 Honda Indy Toronto marked the 100th anniversary of an Indianapolis car in Toronto.

In 1916, a Peugeot driven by Dario Resta won the Indianapolis 500. There were 23 drivers in that race, including Pete Henderson of Fernie, B.C.

Two years later, that 1916 Peugeot was at the Canadian National Exhibition. It is unclear whether the car was driven in a race or just taken around a small horse track in front of a grandstand. In those days, exhibitions such as the CNE would sometimes feature a car on the ground racing a plane that was flying just metres above the ground.

A city of Toronto Archives photo shows four men posing with the car — unidentified except for Dr. Perry Doolittle, second from left, who drove across Canada in a Model T Ford from Halifax to Vancouver in 1925 and is known as the spiritual father of the Trans-Canada Highway. He later was founder of the Canadian Automobile Association (CAA).

So, now you know. 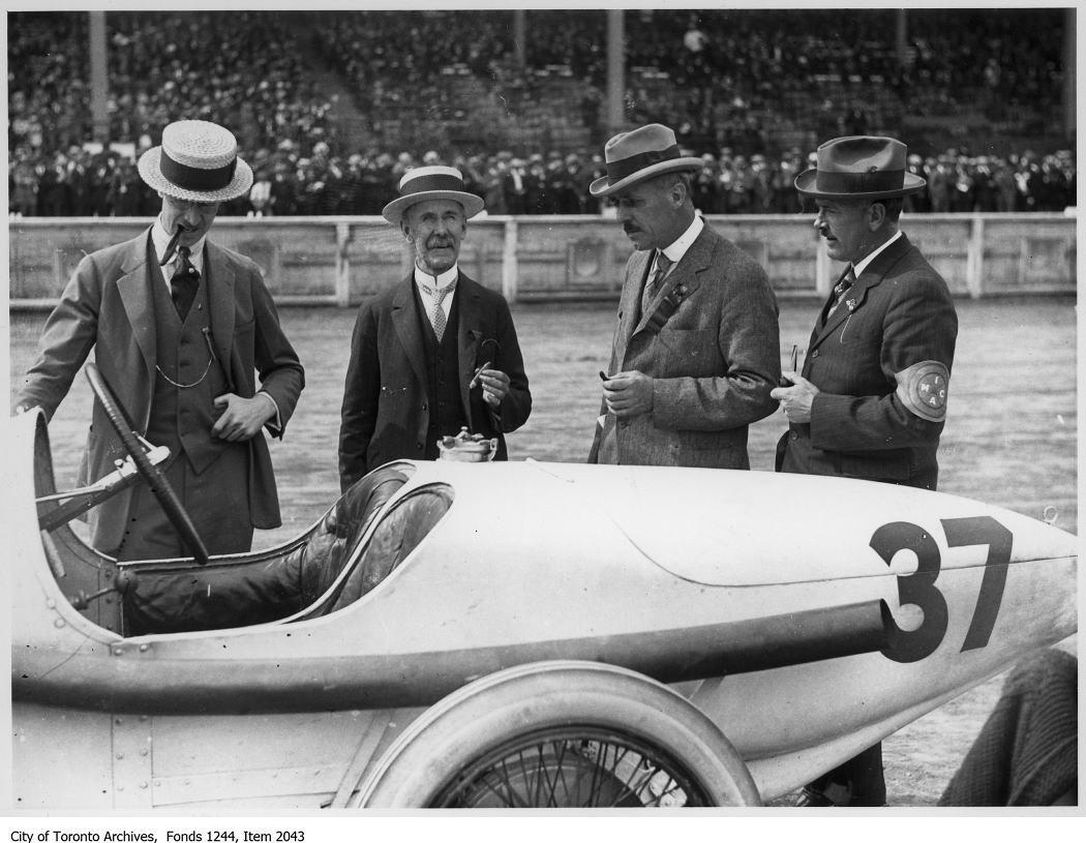