Another Rolex for Wayne Taylor; Wittmer-Fidani win Pilot challenge; Canadians in racing and all the news

Filipe Albuquerque, Helio Castroneves, Alexander Rossi and Ricky Taylor, driving a Wayne Taylor Racing Acura DPi, won the Rolex 24 at Daytona this weekend – but you already knew that. I have news that many of you don’t know about. Some do, but a lot don’t.

Chris Bye, a long-time Canadian road racer (he was in a Porsche at the 2003 Rolex) and author (he wrote Crash Test, about his brother and fellow racer Rick Bye’s devastating highway accident) has announced the creation of a new GT4/TCR professional sports car racing series that will start competing, God (and COVID) willing, at Canadian Tire Motorsport Park this coming May.
A tentative schedule has the series running at five locations the first year with the first races – two 45-minute sprints are currently planned at each meet – at CTMP and winding up there in October. In between, a TBA race will be held in July and there will be in two in August at Calabogie Motorsport Park near Ottawa and Circuit ICAR in Montreal.

Bye is one of those men who doesn’t pull his punches. He makes his living arranging and organizing vehicle launch events for many of Canada’s automobile manufacturers and he wants more. He figures by getting them involved in his series – fingers crossed – he can impress them on his company’s merits.

He also makes no bones that he’s in this game to make money.

“This is a for-profit entity,” he told me in an interview. “I have been completely up front about this. I am not sponsoring this like I did the Pfaff plaid Porsche car in the IMSA WeatherTech championship or other cars and series I’ve sponsored over the years. This is a business opportunity. I do business with about half the manufacturers; I would like to do business with them all. This (series) gives me a foot in the door of the manufacturers I don’t deal with and if that doesn’t work, I will just go knocking on their door.”

Bye said COVID-19 forced his hand. “COVID kind of decimated my business (many unveilings were put on hold or restricted to local launches) and I was looking for something to keep our team together.”

When the pandemic hit last March, the Pfaff car was parked and then about mid-summer, Steve Bortolotti, the team manager, called and said the car and the team would sit out of the WeatherTech championship till 2021. “I had a new Audi RS3 TCR car at the time and Steve suggested we do some races in the Canadian Touring Car Championship.”

So they did a deal. Quebec racer Zach Vanier drove and he won the championship. And that, Bye said, is where the idea for a new series started.

“Some of the teams started talking and they’d been doing the same thing for a number of years and were looking for something different. And there was one thing: if you’re a boxer, you’re an amateur boxer till the day you get paid; then you’re a professional. If you show up at a race track with zero prize money, you can call it whatever you want, but if there’s no prize money and nothing to win, it’s not professional (suggesting that this is the case with the CTCC).

“So we saw an opportunity to do a series that offers a value proposition back to the drivers, teams and sponsors and will operate under full transparency. The teams will know what sponsorship revenue is coming in and where it’s going. I can tell you now that there is a prize fund; money is in place. It’s not as big as we want it to be but it’s still January. We will continue to work hard to put money back into the teams.

“We are talking to a couple of potential title sponsors. Nothing is signed but we do have some sponsorship in place. I‘m not at liberty at this time to reveal who and what but it’s there.

“If somebody wins, they get paid. We’re focusing exclusively on the homologated GT4 and TCR platforms; we want manufacturers to get involved. We work with many of the manufacturers now; we’re in their buildings on a regular basis. Their goal is to sell cars and to engage with the dealers. So we’re sticking to those two platforms. It’s easier for the fans to understand.”

Bye said that some of Canada’s most famous international racing teams – Multimatic Motorsports of Markham, AIM Autosport, R. Ferri – have signed on to run in the series. Their entries bring the number of cars to 18 or 20.

“All have sent in registration deposits for one car but they say there might be more than one. The Multimatic model, for instance, is they are the builder of the Ford GT4 Mustang, so they might have a car in the factory that someone might come along and provide an operating budget for, or they might sell the car to a customer and then maintain the car for the client. R. Ferri, for instance, with the Ferrari Challenge, the customers own those cars and R. Ferri offers the trackside support.

“It’s all COVID. Most of the people racing are running businesses. They can’t go away and come home and quarantine for 14 days. They want to stay and race in Canada.

“We’re super excited. The support we’ve had from the motorsport community and the manufacturers has been incredible.”
This new racing series, of course, is going right up against the established Canadian Touring Car Championship for sponsors, cars and places to race. Is this a good idea? I’ll be back next week with an analysis. 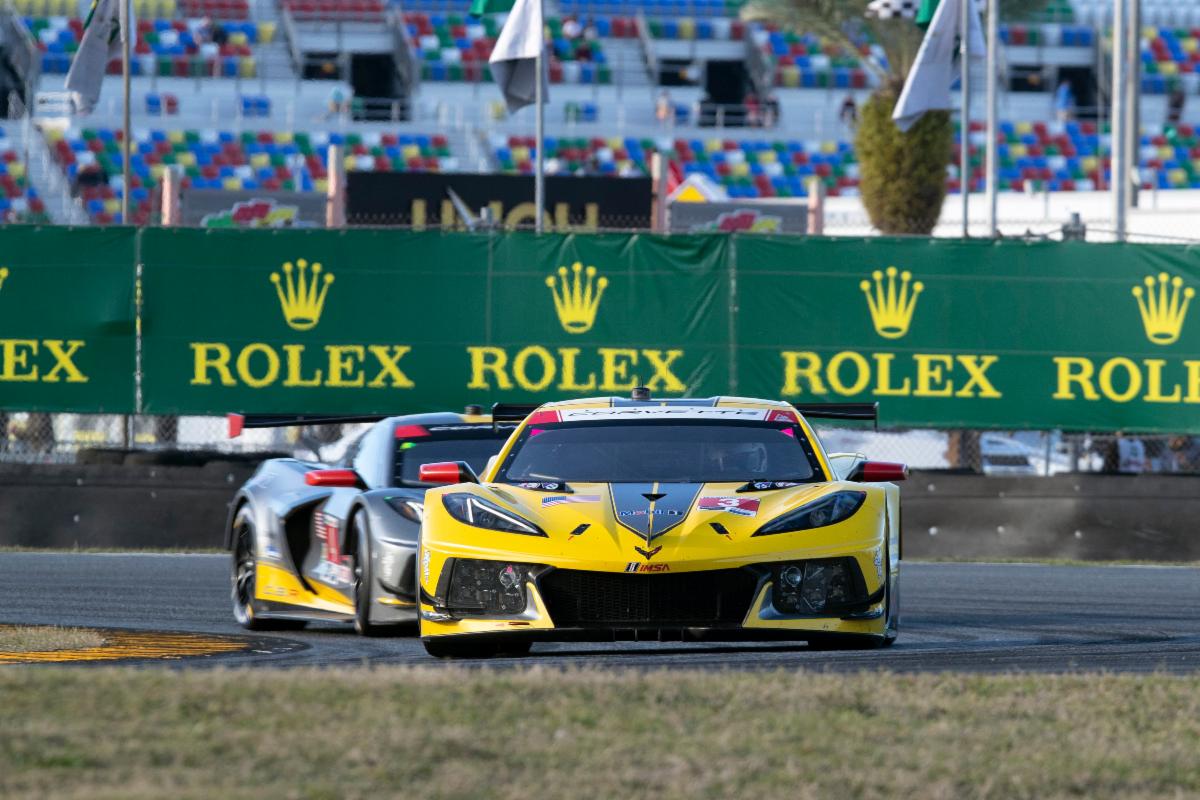 Roger Penske sat down one day and figured that with an IndyCar team, NASCAR Cup and Xfinity stock car teams, an IMSA sports car team, the Indianapolis Motor Speedway and plans to help rejuvenate the Road to Indy racing programs that something had to give. So he and his IMSA Acura DPi team agreed with Honda Performance Development that somebody else should run the sports car program.

Or, Honda decided to pull the plug. It doesn’t matter which version you want to believe, the end result is the same. The Honda/Penske relationship came to an end at the end of the 2020 season.

According to IMSA.com, lead driver Albuquerque suspected something was wrong with his closest competitor as the race wound down and he was right because Renger van der Zande, driving a Cadillac for Chip Ganassi Racing, was forced to pit with a flat right rear tire with 7 minutes, 50 seconds left in the race. This allowed Albuquerque to drive the No. 10 Konica Minolta Acura ARX-05 DPi to the finish line 4.704 seconds ahead of the No. 48 Action Express Racing/Ally Cadillac DPi-V.R driven by Kamui Kobayashi, who was co-driving with Jimmie Johnson, Simon Pagenaud and Mike Rockenfeller.

It was Albuquerque’s second Rolex victory in the past four years and the third consecutive Rolex victory for Wayne Taylor Racing.

WTR joined Chip Ganassi Racing as the only teams to score three consecutive overall victories in the Rolex 24, IMSA reported. It also was the fifth overall Rolex 24 victory for Wayne Taylor Racing, which previously won in 2005, 2017, 2019 and 2020.

Following Kobayashi (who was also chasing a third straight Rolex 24 win) was the No. 55 Multimatic Motorsports of Markham’s Mazda RT24-P shared by Oliver Jarvis, Harry Tincknell and Jonathan Bomarito.

In the Le Mans Prototype 2 (LMP2) class, Paul-Loup Chatin put the finishing touches on a 19.513-second victory by the No. 18 Era Motorsport ORECA LMP2 07 over the No. 8 Tower Motorsport ORECA co-driven by John Farano of Toronto, Gabriel Aubry, Tim Buret and Matthieu Vaxiviere. Chatin co-drove the No. 18 with Ryan Dalziel, Dwight Merriman and Kyle Tilley. The Era Motorsport car’s livery was designed, in part, by a 6-year-old from Whitby, Owen MacEachern.

Spencer Pigot drove the final stint of a three-lap victory in the Le Mans Prototype 3 (LMP3) class by the No. 74 Riley Motorsports Ligier JS P320 he shared with Gar Robinson, Scott Andrews and Oliver Askew. LMP3 was making its WeatherTech Championship debut and the cars were racing for 24 hours for the first time.

The WeatherTech Championship season resumes March 17-20 with the 12 Hours at Sebring. My thanks to the IMSA Communications Staff who provided some of the other material for this report. 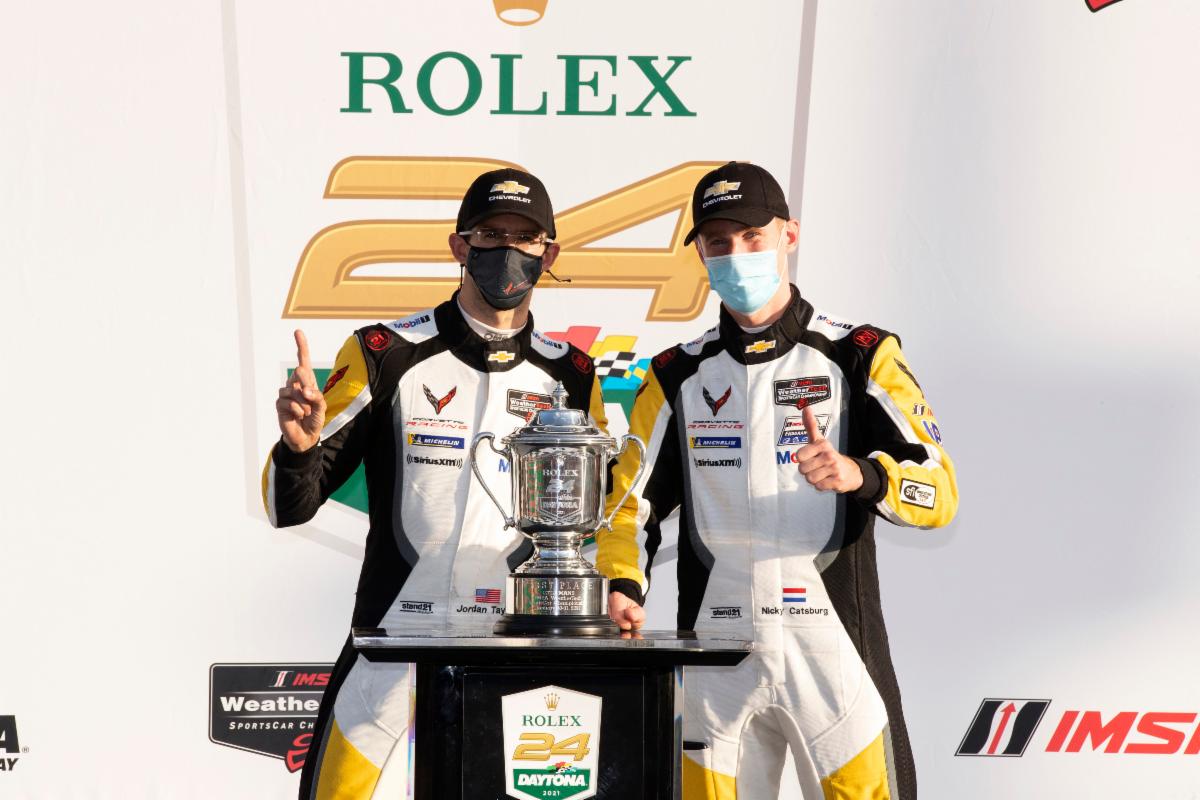 Helio Castroneves is such a character. Clowning around as usual, he said there would be a big party at Wayne Taylor’s house Sunday night to celebrate the victory and everybody was invited. “When I get the address, I’ll put it out on my Twitter,” he joked. At least, I think he was joking. . . . . . For the fourth time in its history, Corvette Racing stood on the top step of the podium in the Rolex 24 – but there was a twist. Driver Antonio Garcia tested negative to COVID-19 upon arriving in the United States but during the race a positive test was delivered to the race team. He was pulled from the car (IMSA later determined Corvette had adhered to all protocols). All crew members and others who came into contact with Garcia will be tested after 72 hours as per CDC guidelines. On the podium, then, his teammates, Jordan Taylor and Nicky Catsburg, stood on the top step (see photo). They, with Garcia, drove the No. 3 Mobil1/SiriusXM Chevrolet Corvette C8.R to victory in the GT Le Mans class. . . . . . Canadians Kuno Wittmer of Hudson, Que., and Orey Fidani of Toronto, in a McLaren, won the season-opening race for the IMSA Michelin Pilot Challenge at Daytona. . . . . . For a report of how all the Canadians did at Daytona, my friends at RaceCanada.ca prepared a chart. You can find it here . . . . . . After being out of racing for a few years because of a concussion suffered in a racing crash, 29-year-old Penticton, B.C., racer Sarah Cornett-Ching will return to late-model racing this season in South Carolina with support from House of Raeford Farms. . . . . . Dale Coyne has partnered with Rick Ware Racing to run Ed Jones for the entire 2021 NTGT IndyCar Season and a second car that will attempt to qualify for the Indy 500 and select other races. . . . . . NASCAR is expecting 30,000 fans at the 101,000-capacity Daytona International Speedway for this month’s Daytona 500. . . . . . Ken Roczen won the Monster Energy AMA Supercross in Indianapolis at the weekend. . . . . . The one-and-only CART/IndyCar racing reporter, historian and columnist, Robin Miller, is one of nine motorsport legends named to the Motorsport Hall of Fame of America. Davey Allison (stock cars), John Cobb (land speed records), Larry Dixon (drag racing), Janet Guthrie (Indy and stock cars), Nicky Hayden (motorycles), Fran Muncey (powerboats), Ray Nichels (historic) and Judy Stropus (sports cars) are the others. . . . . . . Sorry, don’t know her name, but the woman pit reporter during the overnight feed of the Rolex 24 said this about a driver change: “ . . . and perhaps a new drinks bottle.” Ya think? . . . . . Fourteen-time National champion and reigning title winner Jordan Szoke will return to defend his title in 2021, partnering again with Kawasaki Motors and S4-R Competition Racing Oil. . . . . . World of Outlaws Sprint Car Series officials have released a massive payout of more than $600,000 available between the five World of Outlaws NOS Energy Drink Sprint Car Series events at Huset’s Speedway in South Dakota and Jackson Motorplex in Minnesota. This includes the potential for one driver to take home $180,000 thanks to a huge six-figure bonus to anyone who can sweep the finale at both tracks. It all starts on Monday, June 21. Now, $600,000? Where is this money coming from? I thought we were in the middle of a pandemic, with the world pretty much shut down. They had 50 cars for the Rolex; I think they had 30 last year. IndyCar is going to have regular fields of 25 or 26 cars. Again, where is the money coming from?