Bernie Ecclestone once said that he didn’t care if any spectators showed up to watch a Grand Prix. Advertising and sponsorship rates were dependent on TV viewership. As long as millions of people around the world were watching, that was good enough for him.

I’m sure that’s what NASCAR has been telling its sponsors these days. Last Sunday’s Brickyard 400 at Indianapolis Motor Speedway was an embarrassment so far as attendance was concerned. I have no idea how many people showed up but it wasn’t many. But 3 million people watched the race on NBC and that’s a solid number.

I have no idea how many showed up at Las Vegas this Sunday but there were entire sections in the fourth and first turns that were closed. The race in the States was on the cable station NBCSN and it will be a day or two before we know TV numbers. The race was televised in prime time in the east, which could be reason for optimism, but cable ratings are rarely the same (as high, really) as network numbers but you never know, considering this was the first race of the NASCAR playoffs.

Okay, now that we have the item about the TV numbers out of the way, I want to know why promoters are not making more of an effort to get people to actually show up at speedways and road courses. Admission money has to benefit somebody (the tracks, for starters) as well as revenue received from the sale of programs, hot dogs and beverages at concession stands. But with some exceptions, empty seats are everywhere these days. There are a lot of community college PR graduates employed by speedways and road-racing circuits who are applying their knowledge of marketing and promotion that they got out of textbooks and it’s not working.

Here’s what got me going on this.

When I turned on that NASCAR race Sunday night, the announcing crew was talking about “Daniel’s Amigos,” fans of the Mexican driver Daniel Suarez. Apparently, they show up in numbers at races, particularly those in the U.S. southwest. NASCAR reportedly has been marketing directly to people originally from Latin America and the success of “Daniel’s Amigos” apparently proves that it’s working.

Well, as Popeye used to say, blow me down.

I have been riding this particular bandwagon for years. I have written columns about this. Let’s use Marco Andretti and the Honda Indy Toronto as an example. If the Indy promoters bring Andretti into Toronto a few weeks before the race to shake some hands and beat the drums, why not take him out to a restaurant in Little Italy and have him meet the leaders of the Italian community and invite them to the race and give a bunch of tickets to the local Business Association to sell? Same with Tony Kanaan. Take him to Little Brazil. And so-on. The flags on cars during soccer’s World Cup illustrate Toronto’s diversity and promoters have these marketing tools handed to them on silver platters and yet few of them seem to ever take advantage.

Hey, if you’re in the Indianapolis Motor Speedway and there’s a NASCAR race at your track and yet the Colts are playing football on television, why not put up a bunch of big-screen TVs and have the football game on at the same as the race? I bet you’d have more people turn out with the TVs up and running than would show up without.

I could go on.

Stuff like that is called press agentry, a lost art. This is what those people used to do.

One year, a PR guy from the Royal Winter Fair took the Grand Champion Bull down to Burke’s at the corner of Bloor and Bay in downtown Toronto and invited the city’s photographers and videographers to snap away. It was, of course, a Bull in a China Shop, get it? Hahahahaha.

It was on the front page of every newspaper in Canada and most of North America. And then there was the time Mel Lastman, who was just starting out in the mid-1960s, took an icebox to Frobisher Bay and sold it to an Inuit family. That’s right – the Bad Boy sold a refrigerator to an Eskimo. Hahahahahaha.

Auto racing needs more press agents and fewer PR people, wouldn’t you agree? Then the seats would be full at the race tracks and millions more would watch on TV and the sponsors would be really happy, wouldn’t they?

In my career, I’ve had the pleasure of watching, interviewing and reporting on the giants of the sport. And I don’t consider all the giants to be in F1 and IndyCar and NASCAR Cup. One of the giants, and one of my heroes, Mike Stefanik, who was a career minor-leaguer, died Sunday while flying an ultra-light aircraft. He was 61 years old.

Mike won nine NASCAR championships, seven in the touring Modified Division (he was regularly up against guys like Jimmy Spencer, George Kent, Steve Park and George Brunnhoelzl III) and two championships in the old Busch North stock car series. He also drove in the Busch Grand National and the Gander Outdoors truck series. In 2003, Mike was named the greatest NASCAR Modified driver of all time after the late, great, Richie Evans.

When I was trackside announcer at Oswego Speedway, I interviewed Mike on several occasions and often met him in Victory Lane. I did one interview for television, but can’t find it on YouTube. I did find a clip on YouTube, though, that shows the fierce competitor that Mike used to be.

One last thing before we get to the results. At the conclusion of the Monster Energy Cup race in Las Vegas Sunday night, NASCAR star Kyle Busch, who was balked (no other word for it) by Garrett Smithley, a backmarker he ran into, and wound up 19th, had this to say to a TV interviewer: ““We’re the top echelon of motorsports and we’ve got guys that have never won late model races running out here on the race track. It’s pathetic. They don’t know where to go, so what else do you do?” Busch added that the only reason he consented to being interviewed was that if he didn’t do it, NASCAR would fine him.

Well, Kyle, welcome to the club. Ride-buyers – starting in F1 with Niki Lauda – have taken over big-league auto racing. F1, IndyCar, IMSA, you name it and more than half the field in each are drivers who are paying owners to put them in their cars. It has turned motorsport into the world’s most dysfunctional sport, where the athletes pay for the privilege of playing.

Think about this for a moment. You know that announcement made by the Leafs in recent days about paying the player, Mitch Marner, an obscene amount of money to play for them for the next six years? Well, reverse that. Have Marner paying the Leafs $11-million every year for the next six to be centre on the first line.

Well, that’s motorsport in 2019, ladies and gentlemen, and ain’t that stupid? Yup.

Now it’s happened (and is happening) in the top NASCAR division – it’s already entrenched in the Xfinity and truck series (how do you think most of the Canadians wound up driving in the trucks race at Canadian Tire Motorsport Park a few weeks ago?) – and there’s no going back.

And to think the racing series of David Pearson, Richard Petty, Cale Yarborough, Buddy Baker, Darrell Waltrip, Jeff Gordon and Jimmie Johnson has come to this.

While we’re here, we might as well get this out of the way: Martin Truex Jr., with more than a little help from Canadian crew chief Cole Pearn, won the race at Las Vegas. Kevin Harvick was second and Brad Keselowski was third. For a complete story on the race, please click here. 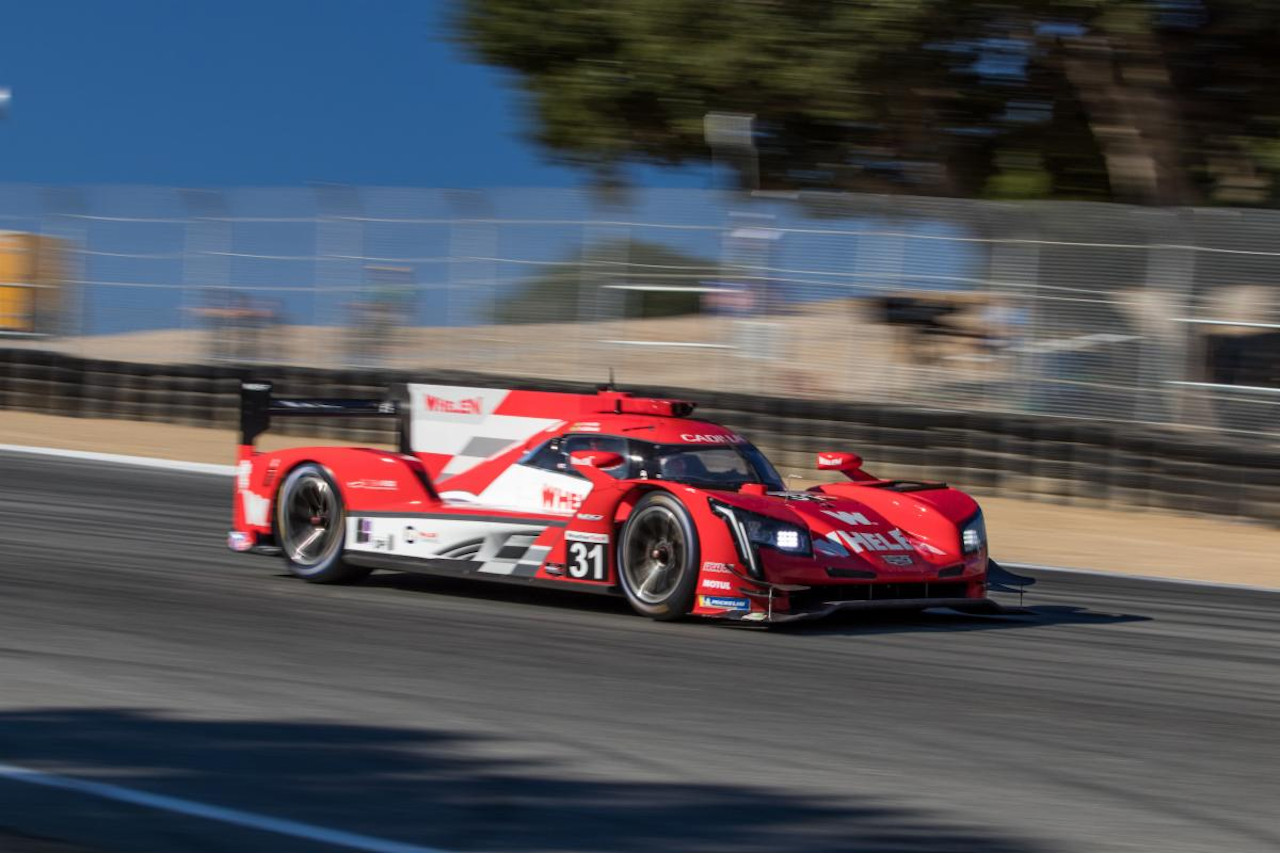 In Sunday’s Monterey SportsCar Championship Powered by McLaren at WeatherTech Raceway Laguna Seca, Dane Cameron and Juan Pablo Montoya cruised to their third victory of the season as Cameron took the checkered flag 9.784 seconds ahead of teammate Helio Castroneves (Ricky Taylor) in the No. 7 Acura DPi after two hours and 40 minutes of racing around the 2.238-mile circuit. In the process, the No. 6 duo extended their lead in the Daytona Prototype international (DPi) championship standings to 12 points. The victory also effectively clinched the 2019 WeatherTech Championship DPi manufacturer’s championship for Acura, which now has an eight-point lead over Cadillac, 297-289. Acura only needs to score manufacturer points at the Motul Petit Le Mans in October to officially take the title. Pipo Derani and Felipe Nasr rounded out the podium in the No. 31 Whelen Engineering Cadillac DPi-V.R with a third-place run.

Dirk Mueller and Joey Hand won the GT Le Mans (GTLM) class victory Sunday in the Monterey SportsCar Championship Powered by McLaren, a round of the IMSA WeatherTech SportsCar Championship. The No. 66 Ford Chip Ganassi Racing Ford GT crossed the finish line 20.039 seconds ahead of the No. 24 BMW Team RLL BMW M8 GTE driven by Jesse Krohn and John Edwards. Antonio Garcia and Jan Magnussen drove a Corvette to third place. In GT-Daytona, Bryan Sellers and Corey Lewis won in a Lamborghini. Scott Hargrove of Vancouver was running in third for Pfaff Motorsport of Toronto when his Porsche was run off the road by a lapped car. However, he recovered to finish fourth.

Zach Robichon of Ottawa, was crowned the inaugural champion of the WeatherTech Sprint Cup after he and Hargrove finished fourth in the GTD class at Monterey. Robichon, who drives full-time for Pfaff, entered the race with a narrow one-point margin over Trent Hindman and Mario Farnbacher. In the end, Robichon’s lead expanded to six, 203-197, following the other team’s eighth-place finish. “We almost got that podium, but at the same time we did what we needed to do to secure the championship,” said Robichon. “It’s not the way you want to do it. It looks like the Acura guys had a hard day, but we’ll take it. I’m very happy with what the Pfaff team has done this year.” While Pfaff Motorsports did not compete in the second round of the Sprint Cup – the Detroit Grand Prix – the Canadian was picked as a substitute driver at that event for Park Place Motorsports, allowing him to remain eligible for the championship. Back-to-back wins at Lime Rock Park and Road America vaulted him up the standings into contention for the title. “I mean, this year I’ve had the opportunity to share the car with a lot of quick guys and we’ve been able to learn from them,” Robichon explained. “Scott (Hargrove), Dennis (Olsen), Matt (Campbell), Lars (Kern, endurance driver), Pat Long as well. They have a lot more experience and I think that is what helped me get to this position. The beauty about endurance racing is you have your teammate and you work together.”

Scott Maxwell of Toronto, co-driver Sebastian Priaulx and Multimatic Motorsport of Markham finished second Sunday at England’s Donington Park in the final race of the season and, as a result, finished second in the British GT4 championship. It was a great season and congratulations for a fine effort. I know Scotty and the team were really hoping for the title but there’s always next year.