Racing Roundup: Montreal promoter has work to do to make Grand Prix a truly Canadian event

With the exception of TSN and – at times – the Globe and Mail, none of the major media in Canada outside Montreal pay any attention to the Canadian Grand Prix, which was won yesterday afternoon by Sebastian Vettel (see photo above).

Or if they do provide coverage, it’s more of the lip service variety than anything else.

This puzzles me, and it has for years.

First and foremost, with a race-day attendance of well over 100,000 people, it is the biggest one-day sporting event in Canada and how can you ignore that? The grandstands were 95 per cent full on Friday morning for first practice. I mean, my goodness.

Who are the editors who make these decisions? The fact that they, personally, might not care all that much for the sport should have no bearing on whether or not a story gets on the air or in the paper or on websites. Anything that attracts 1000,000-plus people is a story.

Except for the Olympics and the World Cup, Formula One Grand Prix auto racing is the biggest sport in the world. More eyes in Europe, Asia, the Far East, Africa and North and South America were on Montreal and Canada yesterday than at any other time or for any other sport (and that includes hockey). You would think this would attract some attention across the land, but apparently not.

Yes, on our side of the Atlantic, auto racing is seen as being a niche sport. We have one permanent facility for spectator motorsport in the entire country and that is Canadian Tire Motorsport Park. The Grand Prix in Montreal is run on a temporary circuit, as is the Honda Indy Toronto. Le Circuit-Mont Tremblant was a permanent-race facility once upon a time, but is no more. Shannonville, Calabogie, Atlantic Motorsports Park and Area 27 are boutique  circuits.

I am in Portugal at the moment, participating in the global drive for the all-electric 2019 Jaguar I-PACE SUV and was absolutely amazed yesterday when we went to a racing circuit to put the car through its paces. The Autodromo Internacional Algarve, which I had never heard of (I thought Estoril was the only circuit of significance in the country), is a 4.6-kms-long jewel with lawns, reflecting pools, flower gardens and seating for 100,000 people (which is twice the size of the Rogers Centre).

The picture in this story is of the main grandstand at Autodromo Algarve and illustrates perfectly the sort of attention motor sport gets in this part of the world and the value attached to it.
Liberty Media, the company that operates F1, is determined to grow the sport by making races a national event, with a week-long festival of parties and other activities. For that to be successful, they will need media support – or, why bother? 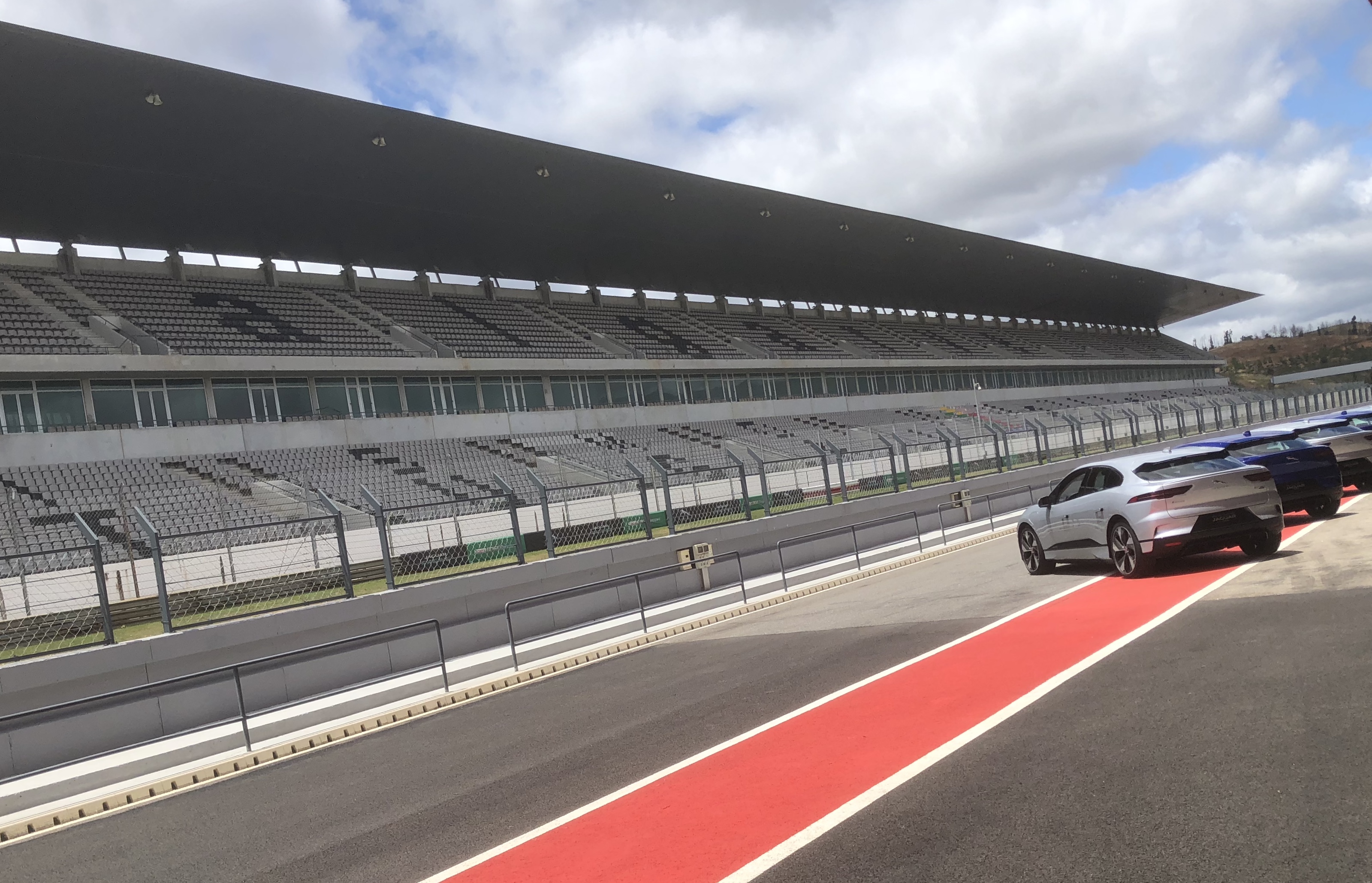 Montreal F1 promoter Francois Dumontier can take steps to help make that support happen. The year he became president and CEO of the Grand Prix, 2011, he travelled to Toronto to meet automotive journalists and racing writers to make their acquaintance and to stress that the annual race is the Grand Prix of Canada, not just of Montreal.

Perhaps he should consider repeating that journey and to include Halifax, Winnipeg and Vancouver. He has to get the media onside somehow, and what better way to do it than to take everybody out for lunch?

Trust me on this one: it will work. 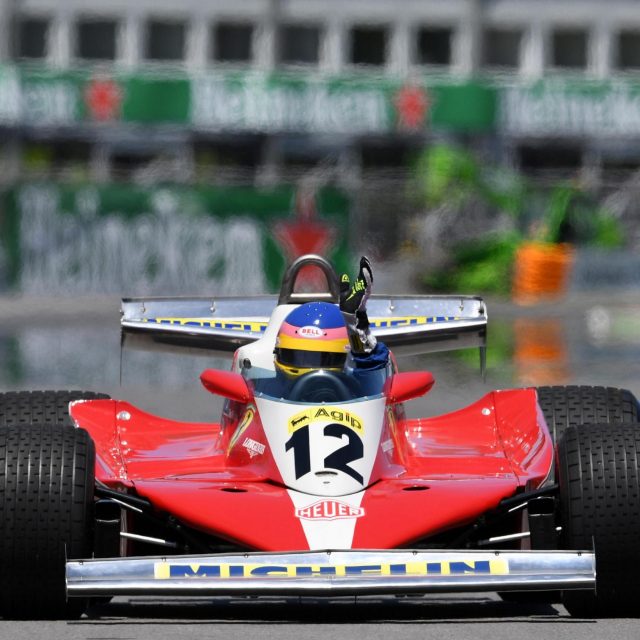 Okay, a couple of things:

– Zak Brown, who now runs McLaren, has been dropping hints about the storied racing company returning to IndyCar in the not-distance future. Many people are suggesting Fernando Alonso would be part of the deal and that he’d run a full season. I doubt it. I cannot see Fernando Alonso racing at Iowa Speedway. Or Pocono. Nigel Mansell did it when CART was in business back in the 1990s but that was when speedways like Nazareth were packed. Can you imagine Alonso going to Phoenix (if it’s still on the schedule) and the place is three-quarters empty? So I say it won’t happen. Indianapolis, Long Beach, maybe Toronto. Road America, if there’s a race there.  But other than those places, forget it.

– Just like racing organizations shouldn’t let non-professionals drive pace cars (I don’t care how many courses they’ve taken), racing organizations shouldn’t let amateurs wave flags. Remember Pele a few years ago, when the soccer great plain forgot to wave the flag to end the race in Brazil? It happened again in F1 at Montreal Sunday (something like it, anyway) when supermodel Winnie Harlow waved the chequered flag a lap early. No big deal, you say? Well, what if Vettel had suffered a flat on what was to be the 70th(and real last) lap? Or Lewis Hamilton had been winding up for a last-lap pass of Daniel Ricciardo? One of these times, when somebody is asked to do something because they’re famous, and they screw up, don’t say I didn’t warn you.

– I have a friend who says every time a Canadian F1 driver starts a race, the team manager should whisper one word in his ear: “Finish.” Lance Stroll is following the pattern of Jacques Villeneuve. Villeneuve, in his rookie season in F1, finished second at Montreal but then had a bad habit of crashing thereafter. Last year, Stroll scored his first F1 points in the Canadian race but this year he was out at Corner 5 of the first lap. He collided with Brendan Hartley and they were both eliminated. The stewards investigated and took no action, meaning it was a racing incident. Most of the British websites, however, put the blame on Stroll. I watched the replay three times and saw something different every time. It was just one of them racin’ deals and people would be wise to just leave it at that.

– TSN is the national broadcaster but just picks up the Sky Sports feed (including promos for upcoming shows on that British TV network). As a result, it didn’t show first practice on Friday morning when a second Canadian driver, Nicholas  Latifi, turned laps in a Force India car. Latifi is officially a test driver for that outfit but only got his first opportunity to drive an F1 car in first practice at his home race. The folks in the grandstands were aware he was out there, of course, but those watching on TV missed out. Too bad. I’ve interviewed Latifi and he’s a nice guy. He was very excited about getting his shot in Montreal.