Also, Gilles on F1 and Canadians might lose some TV races

Before I start on this week’s roundup, here are two nuggets to chew on:

1. I really don’t have a lot to say about this new all-women racing series that will start in England next year – and which has been roundly condemned by many of the women racing drivers currently in competition – except to point out that the all-male organizing committee (David Coulthard, Adrien Newey, Dave Ryan and Matt Bishop) stands to make a whole lot of money out of this venture. I might very well be the first auto racing writer to point this out.

2. Following up on last week’s column, in which a friend of mine had some suggestions on how to improve Formula One, Richard Russell, a Halifax-based automotive journalist, sent a note in which he said Gilles Villeneuve once told him that he had the answer: a thousand horsepower and seven-inch tires. Yup, I think that would do it.
Okay, here goes.

Although I am not a fan of night-time endurance racing on television (headlights in the dark at Road Atlanta, Sebring, Daytona or Le Mans don’t excite me because I have no idea who’s who; in fact, even the announcers were confused as to who ran out of fuel on the last lap of the Petit Le Mans on Saturday night), I can remember a time when we couldn’t watch any of those iconic races.

Not too long ago, either.

And now I’m concerned that we might not see some of them on television again for awhile.

IMSA, which sanctions the WeatherTech Championship (24 Hours of Daytona, 12 Hours of Sebring, the Mobil 1 SportsCar Grand Prix at Canadian Tire Motorsport Park and so-on), has been a property of FOX Sports 1 in recent years. Some Canadian cable companies – Rogers, Cogeco – include a channel called FOX Sports Racing, which is FOX Sports 1 minus sports like Major League Baseball, NFL Football, UFC, etc. that are the property in Canada of other TV companies, namely TSN or Sportsnet.

NBC has decided that it wants to be the television home of auto racing in the United States. It outbid FOX for IMSA-sanctioned races (WeatherTech, Continental Tire) and outbid ESPN-ABC for IndyCar races. That’s why on Saturday night, everybody on FSR (FOX Sports Racing) was saying goodbye and we’ll meet again and good job and etc.

NBC plans to televise the big IndyCar Series races on its full network – the Indianapolis 500, for instance – and will put the lesser races on its all-sports channel, NBC Sports Network, a.k.a. NBCSN. Those races have been seen in Canada on Sportsnet since 2014 and Paul Tracy is one of the analysts.

In recent years, we have been very fortunate in Canada (those of us who get FSR, anyway) to have access to all the major races. TSN carries all the Formula One races plus all of NASCAR’s  Monster Energy and Xfinity races. Sportsnet has had the IndyCar races. FSR has had IMSA, the NHRA  and the NASCAR truck series.

But now that IMSA has gone to NBCSR, remember this: we don’t get NBCSN in Canada and unless a deal is made to get the IMSA races on TSN or Sportsnet, we won’t be able to watch them.

I know there is streaming but there are rules. Remember the old grey market TV days? When you had to have an American address in order to subscribe to U.S. satellite TV? Well, they put an end to that (well, mostly put an end to it) and I suspect the same thing would/will happen with streaming.

So cross your fingers. It would be a shame to lose access to race programming that took so long for us to get. But it could happen.

The Petit Le Mans was kinda exciting. Click here for a full report. 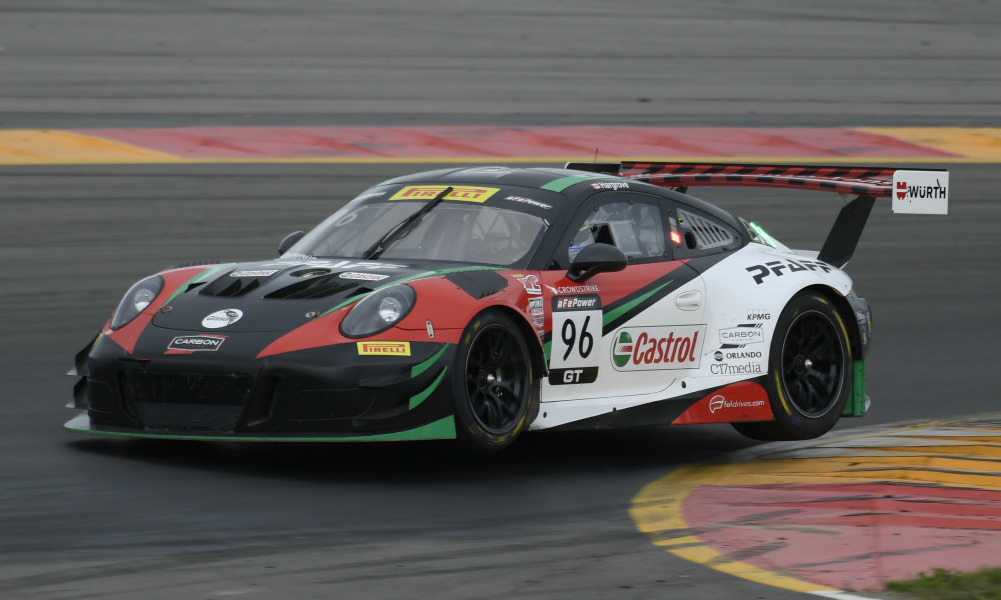 Now, talking about the WeatherTech championship, a Toronto automotive group, Pfaff, is entering a car in the series next year with two of Canada’s finest young drivers, Scott Hargrove and Zach Robichon, signed to drive. Kudos to Pfaff and I have nothing but respect for the two guys lined up to race. Congratulations to all!

Here is the media release with the news.

Pfaff Motorsports will run GTD Sprint Cup in the IMSA WeatherTech SportsCar Championship in 2019, contesting the seven races in the Sprint calendar with a new 2019 Porsche 911 GT3 R and Canadian drivers Scott Hargrove and Zacharie Robichon.

In selecting its drivers, the Canadian team continues its tradition of finding up-and-coming Canadian talent. Hargrove and the Pfaff team finished their first year in Pirelli World Challenge by winning the GT Sprint class championship – the first time in series history a rookie team has won the championship’s top class. The No. 96 Castrol-Pfaff Motorsports 911 GT3 R was also the top Porsche in the series’ overall standings.

“I couldn’t be more excited to enter the IMSA WeatherTech Sprint Championship in 2019,” said team manager Steve Bortolotti. “We have long targeted this series as where we ultimately want to bring our program, and the new sprint format allows us to make that transition sooner than expected. We are working hard with our commercial partners to be on the grid for all the endurance events in the near future, and are thrilled to contest the sprint championship as well as Petit Le Mans in 2019.

“Our relationship with Porsche Motorsport North America has been incredible over the years, and we are excited to begin another new chapter of our company’s racing history with a marque we have passionately represented for over 50 years.”

Hargrove admits there will be challenges in graduating to IMSA’s top class, but a pairing with Robichon is a bit of a reunion.

“There will be new challenges like dealing with other classes of cars, refueling, and significantly longer races,” he said. “I’m excited to have Zach joining our all- Canadian team – we were teammates racing Formula 1600, both in Canada and Europe, and again in 2016 racing Porsche GT3 Cup. I know he will be very quick, and that will allow us to focus on the details necessary to become a winning team.”

Robichon said he will rely on Hargrove’s experience as he transitions to GTD.

“It will be a tough transition from a one-make sprint series to GTD, but I’m up for it,” he said. “I had the task of competing against Pfaff Motorsports in 2016 and 2017, seeing first-hand their ability to produce race- and championship-winning cars, and their results in 2018 speak for themselves. I couldn’t think of a better place to compete in 2019, and this will be the fourth time Scott and I will race as teammates. I know we’ll push each other to get the most out of the car. His experience in the GT3 R means I’ll be leaning on him a lot to learn.”

Methinks Robichon is being too kind. I don’t think he has a lot to learn from anybody. They are both superlative race drivers and its going to be delightful watching them trying to beat each other. 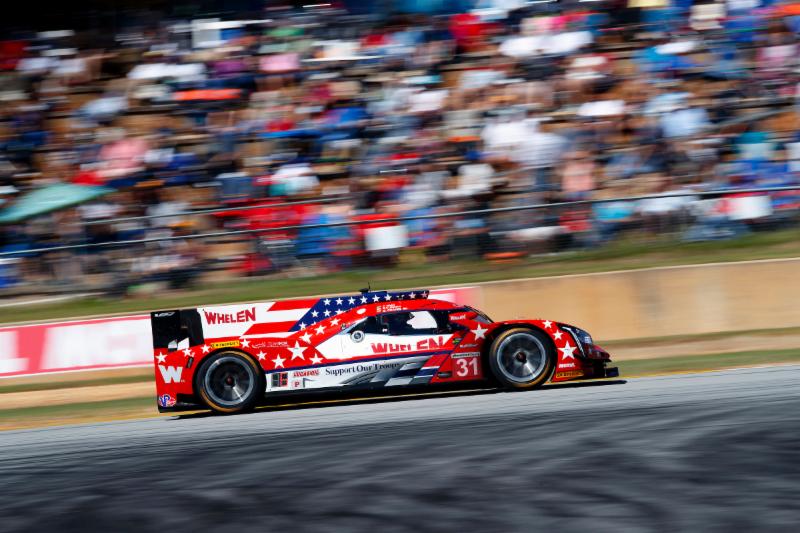 Aric Almirolo won Sunday’s Talladega 500, which only featured a couple of Small Ones near the end of the race but happened late enough that it forced overtime and several of the front-runners then ran out of fuel. Almirolo, who hadn’t won in his last 149 NASCAR Cup-level starts, made his pass for the lead stick on the last lap of the race. For details, please click here.

Timothy Peters, who’s 15 minutes are just about up, knocked Noah Gragson out of the way on the last lap to win the Camping World Series Truck race at Talladega on Saturday. Canadian Stewart Friesen of Niagara-on-the-Lake was one of two drivers eliminated from the playoffs. The only truck drivers remaining in contention for the championship are Gragson, Grant Enfinger, Johnny Sauter, Justin Haley, Matt Crafton and Brett Moffitt. Want to know more about that race? Please click here.

Mike Conway, Kamui Kobayashi and Jose Maria Lopez won the WEC round in Japan while driving a Toyota. The sister car with Fernando Alonso, Sebastien Buemi and Kazuki Nakajima was second – the team’s third one-two finish in four races. . . . . . Steve Torrence won his fourth straight Top Fuel race Sunday in the 11th NHRA Carolina Nationals at zMAX Dragway. Ron Capps won in Funny Car, with Jason Line in Pro Stock and Matt Smith in Pro Stock Motorcycle also notching up victories. . . . . . Mick Schumacher – Michael’s son – won the FIA Formula 3 European Championship. He will be in Formula One soon. . . . . . Hey, this is rich: Lewis Hamilton is asking the media to please lay off poor Sebastian Vettel, who’s just trying his best, Lewis says. Vettel, of course, doesn’t need any help from anybody but this is Lewis’s way of sticking the knife in just a little further. . . . . . Jimmie Johnson and Chad Knaus are going their separate ways (under the Rick Hendrick banner, of course) in 2019 but this is because the magic that worked so well for so long just isn’t working any longer. It’s like a hockey coach who is a great coach but the players tune him out, for some reason. Johnson will have a new guy om his corner next season and Knaus will have a new driver. Good luck to both of them – they have been a terrific team. . . . . . Mercedes-Benz, which is going Formula Electric racing, finished off its participation in the German Touring Car Championship (DTM) with a bang. Driver Gary Paffett won his second driver’s championship by finishing third in the last race of the season Sunday in Hockenheim and Paul di Resta (who should go to IndyCar and maybe fill in for Robert Wickens while he recuperates) finished third in the standings and 14th in the race. And Mercedes won the Constructor’s Championship. The German marque will be replaced in the DTM by Britain’s Aston Martin. . . . . . And talking of Brits, Williams has signed Formula 2 driver George Russell to replace Lance Stroll in 2019.