Ranger wins Nascar, Schrader does an advertisement  and all the news

Join the Conversation (0)
Well, we’re right back to where we were a year ago. The Ferraris of Charles Leclerc and Carlos Sainz were out of and the Red Bulls of Max Verstappen and Sergio Pérez were in. George Russell made up the podium. One thing: Lewis Hamilton was coming on strong and he will start to win soon. Pierre Gasly finished fifth and that was all she wrote.

It was somewhat of a dull race. The track at Azerbaijang is too long.

Newgarden drove to his third victory of the NTT INDYCAR SERIES season in the No. 2 PPG Team Penske Chevrolet and earned the $1 million PeopleReady Force for Good Challenge bonus. The Challenge rewards the first driver to win on all three types of circuits – road courses, street circuits and oval tracks – in 2022.

The $1 million is shared, with $500,000 going to Team Penske and Nashville-area native Newgarden and $500,000 donated to Newgarden’s chosen charities. Newgarden, who previously won this season on the Texas Motor Speedway oval and the Long Beach street circuit, selected two charities to split the $500,000 portion – SeriousFun Children’s Network and Wags and Walks Nashville.

“To finally get it done and most importantly to give that money to charity, half of that money is going to charity with SeriousFun Network and Wags and Walks Nashville,” Newgarden said. “I hope they’re happy about it. That’s a lot of money coming their way.

“You’ve got to be on your toes at all times (in this series). You can go in with a plan, but you probably have to change your plan 90 per cent of the time once the race starts to unfold. To be able to hit all these disciplines with this team, for me it’s the best series in the world.”

2022 Indianapolis 500 presented by Gainbridge winner Marcus Ericsson finished second in the No. 8 Huski Chocolate Chip Ganassi Racing Honda, 3.3710 seconds behind Newgarden. It was Ericsson’s fourth consecutive top-seven finish, and he regained the NTT INDYCAR SERIES championship lead by 27 points over previous leader Will Power, who finished 19th in the No. 12 Verizon Team Penske Chevrolet.

Romain Grosjean finished fourth in the No. 28 DHL Honda, with teammate Colton Herta rounding out the top five in the No. 26 Gainbridge Honda after starting 11th. Andretti Autosport placed three cars in the top five – Rossi, Grosjean and Herta. 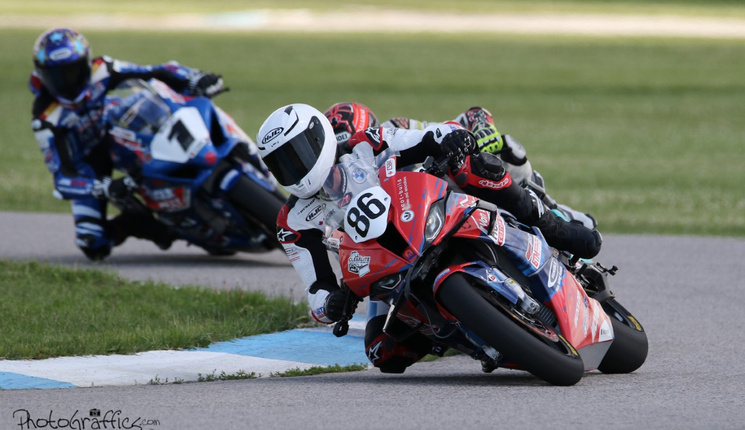 Newgarden, who started second, prevailed despite two cautions in the last 10 laps of the race that evaporated his 2.8-second lead over Rossi.

The first restart, on Lap 50, lasted less than half a lap because four-time Indianapolis 500 winner Helio Castroneves spun in his No. 06 AutoNation/SiriusXM Honda exiting the final turn on the uphill climb to the green flag. That bunched the field again on the 14-turn, 4.048-mile road course for a restart on Lap 52, with Newgarden leading Rossi, Ericsson, Herta and Grosjean.

Two-time series champion Newgarden rocketed away from the field on the second restart, just as he did the first. Those rapid restarts built too big of a gap for any challenges, helping Newgarden avoid a repeat of his heartache in last year’s race at Road America, when he lost the lead to Alex Palou due to a mechanical problem on a restart with two laps to go.

Newgarden led a race-high 26 of 55 laps, taking the top spot for good during rivals’ pit stops on Lap 43.

“I was just trying to stay focused on what I had to do,” Newgarden said. “Just an unbelievable job by everybody at Team Penske.”

- First victory of the year for Ranger

The Wight Motorsports Inc (WMI) prepared #27 driven by Roxton Pond, Quebec’s Andrew Ranger scored the race win at round number four of the NASCAR Pinty’s Series this past Saturday at the Autodrome Chaudière near Valley Jonction, Quebec. It was the second win at the quarter-mile track for Ranger and the first win as a Crew Chief for Cayden Lapcevich with the team. After starting the 250-lap race in eighth position Ranger had made his way to second position by the scheduled midway break. However, a pit stop penalty sent Ranger to the back of the field for the restart. When the race resumed Ranger was able to run both high and low effectively on the track and once again charged to the front taking over top spot and holding on for the 31st win of his career.   It was a strong showing for several WMI cars with Rookie of the Year contender Brandon Watson climbing up to fifth spot before a spin set him back. Watson still managed a ninth-place result. A late race tangle also prevented Mark Dilley from picking up a top-ten finish. QUOTES:“What a great drive by Andrew to pick up the victory. The team did a great job to adjust the car during practice, good call by Cayden during the pit stop not to make big changes and let the race play out. Happy for both to pick up their first win together”.“Really nice drive by Brandon too. He’s never been here before and started mid-pack but drove a smart race to get up to fifth. It’s disappointing he got turned around by another car, but he still managed a top-ten finish”.“Disappointed for Mark too, he also got tangled up with another driver. After getting hit in a big collision near the end of the race we’re glad TJ is okay. And Glenn had a mechanical issue putting him out early. We’ve got a bit of work to do before the next race in Newfoundland”.-David Wight, WMI Principal WMI TEAM RESULTS:                 Ranger 1st, Watson 9th, Dilley 12th, Rinomato 20th, Styres 23rd   TV & LIVE STREAMINGThe race from the Autodrome Chaudière will be broadcast on TSN Saturday June 18th at 3PM Eastern. It will also air on RDS2 at a date and time to be determined.   All races are streamed live on TSN.ca and the TSN app in Canada and through FloRacing in the United States. NEXT EVENT:Round four of the 2022 season will take the WMI teams to Newfoundland and the Pinty’s Series first ever visit to Eastbound International Speedway for 225 laps of action on Saturday June 25th. The 2022 NASCAR Pinty’s Series will consist of 13 total races in five provinces with a mixture of oval tracks, road and street courses. Race fans can get the latest information regarding WMI and the drivers on these social media channels: Wight Motorsports Inc Twitter @Wightmotorsport Instagram @wightmotorsport     Brandon Watson: Instagram @brandonwatson_9 Mark Dilley: Twitter @MarkDilley9 Instagram @markdilley TJ Rinomato: Twitter TJ_Rinomato  Instagram @tjrinomato Andrew Ranger: Twitter @AndrewRanger51 Instagram @andrew_ranger27 Glenn Styres: Twitter @GlennStyres Instagram @glennstyres Here are the results from Osweken Speedway Friday:

1 JR Fitzpatrick (in a borrowed car of 55 Chris Howse)

The 2022 Canadian Superbike Championship will kick off with a surprising name at the front, as rookie star Trevor Dion smashed his way to pole position for the Pro Superbike feature doubleheader at Grand Bend Motorplex this weekend.

Dion already gained plenty of attention on Thursday by topping the official test day at his home circuit, but the LDS Consulting BMW rider created even more buzz early in Friday’s qualifying session as he continued to lead the timesheets.

His time of 1:03.040 appeared to put him right in contention for a historic pole position, but a rear brake issue left him vulnerable as the session flipped to the top-ten Superpole. After fixing the issue just prior to the final shootout, the Strathroy, Ont., native quickly erased any concerns as he obliterated the lap record with a time of 1:02.371 in the final top-ten Superpole session to capture the BS Battery Pole Position Award.

His dominant performance lands him in exclusive company in CSBK history, as Dion will head into the weekend as the only rider ever to secure pole position in his Superbike debut and only the third-youngest pole-sitter ever at 20 years old.

“It’s a dream come true, even just to be up here battling against these guys and racing with them, it’s a really awesome feeling,” Dion said. “Now with the doubleheader we have two chances to pick up some big points this weekend, but also a couple more opportunities to gain some confidence here on the Superbike.”