IndyCar Can't Escape Comparisons When it Races at an F1 Track

Colton Herta makes history as youngest driver to win an IndyCar race; Keselowski wins NASCAR Cup round plus all the news

I know everybody in the IndyCar community was excited about the series going to the Circuit of the Americas – as it did Sunday and it had a wonderful ending – but I always thought it was a bad idea. Why? Because the inevitable comparisons between Formula One and IndyCar would be made.

I know the cars are lighter and they have more horsepower but the F1 cars take 14 fewer seconds to go around COTA than the Indy cars and you just can’t get away from that. Both series are trying to grow in the U.S. and the average guy could care less about weight and power. All he, or she, hears is that the F1s are way faster than the Indys. So that’s reason No. 1 I thought the Indy cars should stay away from that Texas road course.

I know the IndyCar fraternity is want to say that there is more passing in a lap of IndyCar racing than there is in an entire Formula One race. But at the end of the day, the IndyCar race Sunday had two race leaders over the entire 60 laps – Will Power and Colton Herta. This was no better than the F1 race at COTA last fall which also had only two race leaders – Lewis Hamilton and Kimi Raikkonen. 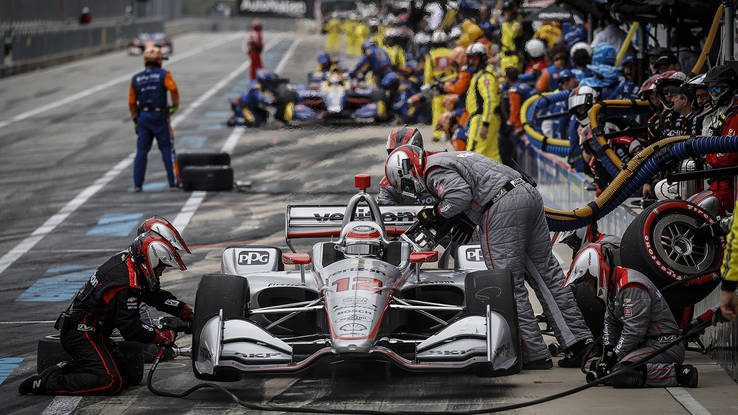 That’s reason No. 2 why I never liked this idea because to convince somebody that IndyCar racing is more competitive, there has to be more than two leaders. This time, there was not. (And, by the way, there’s lots of passes back in the pack in an F1 race but you rarely see them on television because the cameras are always on the leader.)

I hate to bring this one up but while there was a decent turnout of fans at COTA for IndyCar, the crowd was small compared to the one that turns out every year for Formula One.  It’s true that Friday and Saturday F1 practice and qualifying at the Austin-area track isn’t terribly well-attended (the fans show up in the evening for concerts featuring stars like Bruno Mars and Britney Spears) but the place is packed on race day.  This was reason No. 3 I thought a race at COTA was a bad idea.

We won’t know about reason No. 4 until the TV numbers are public – it usually takes till Tuesday for everything to be tabulated – but cross fingers I’m wrong on this one. F1 was on the full ABC network last fall and could only attract just under 800,000 compared to the NASCAR Cup race at Kansas that had 2.7 million viewers. However, 790,000 TV watchers for F1 is better than the 500,000 who tuned in for the first IndyCar race at St. Pete two weeks ago. Let’s hope that people are now aware that IndyCar is racing again and tuned in to watch the COTA race.

Having said all of the above, I don‘t know what IndyCar has to do to draw a decent audience, both in the stands and at home. It has a wonderful new star in Herta, who became on Sunday the youngest person to win an IndyCar race, dethroning Graham Rahal in the process. Herta is still 18 and Rahal had just turned 19 when he won.

And the kid drives for George Steinbrenner IV, grandson of you know who, which should be worth a newspaper and television story in every city IndyCar has a race.

So, add it up: great racing, a new young racing star, a famous young owner, two other legendary team owners (Penske and Ganassi), a great field of drivers (Power, Rossi, Dixon, Hinchcliffe), a couple of F1 racers who could still be in harness there except for lack of cash (Ericsson, Rosenqvist), Americans (Rahal, Andretti), great circuit and city races (Laguna, Toronto) and the biggest race in the world (Indianapolis) and I’m at a loss.

But one thing I do know: IndyCar has to march to its own drummer and stay away from places that invite comparisons, like the Circuit of the Americas in Austin, Tex.

For a blow-by-blow, complete with order of finish, please click here. 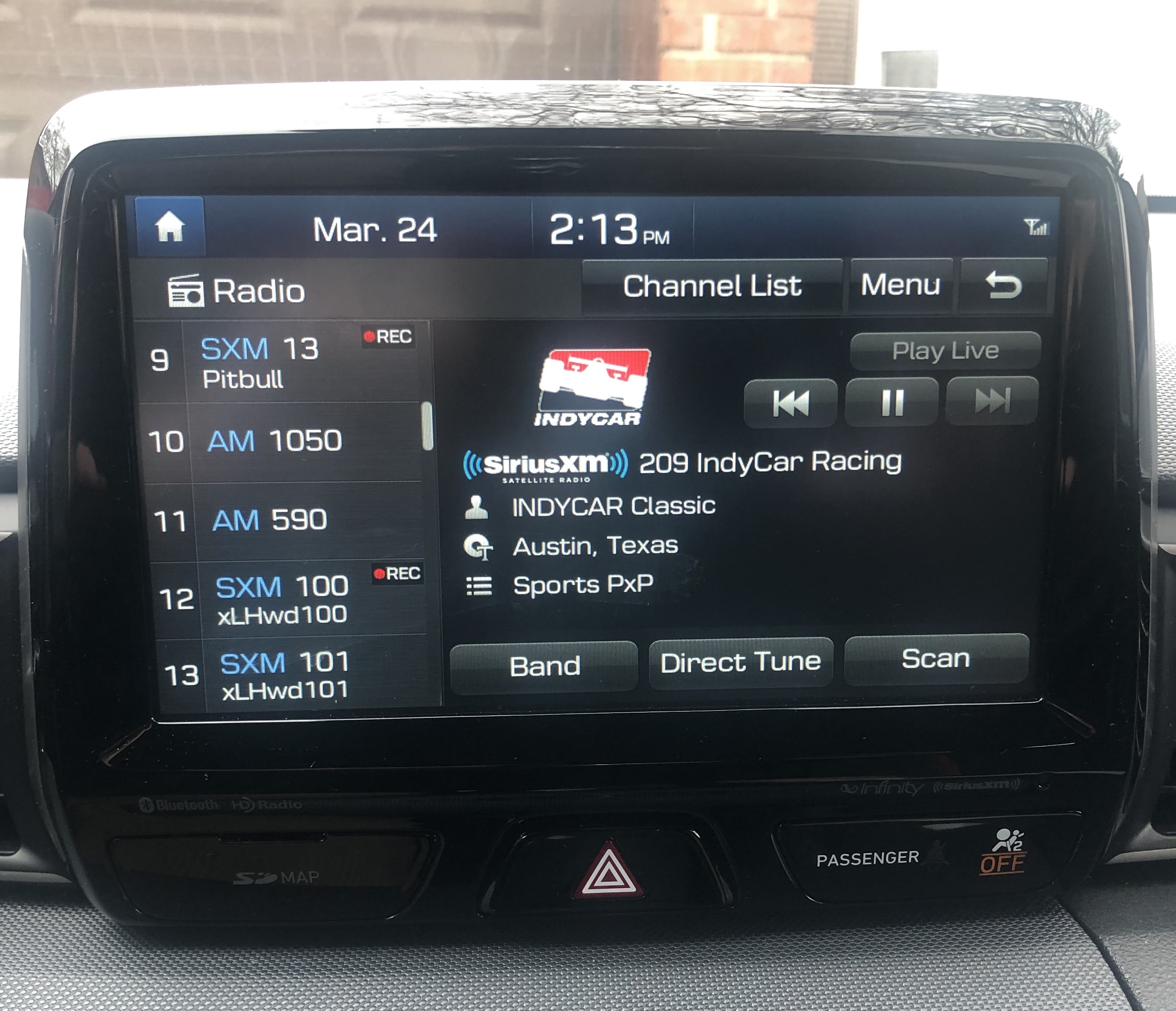 Norris McDonald listened to the first half of Sunday’s IndyCar race on his car radio. 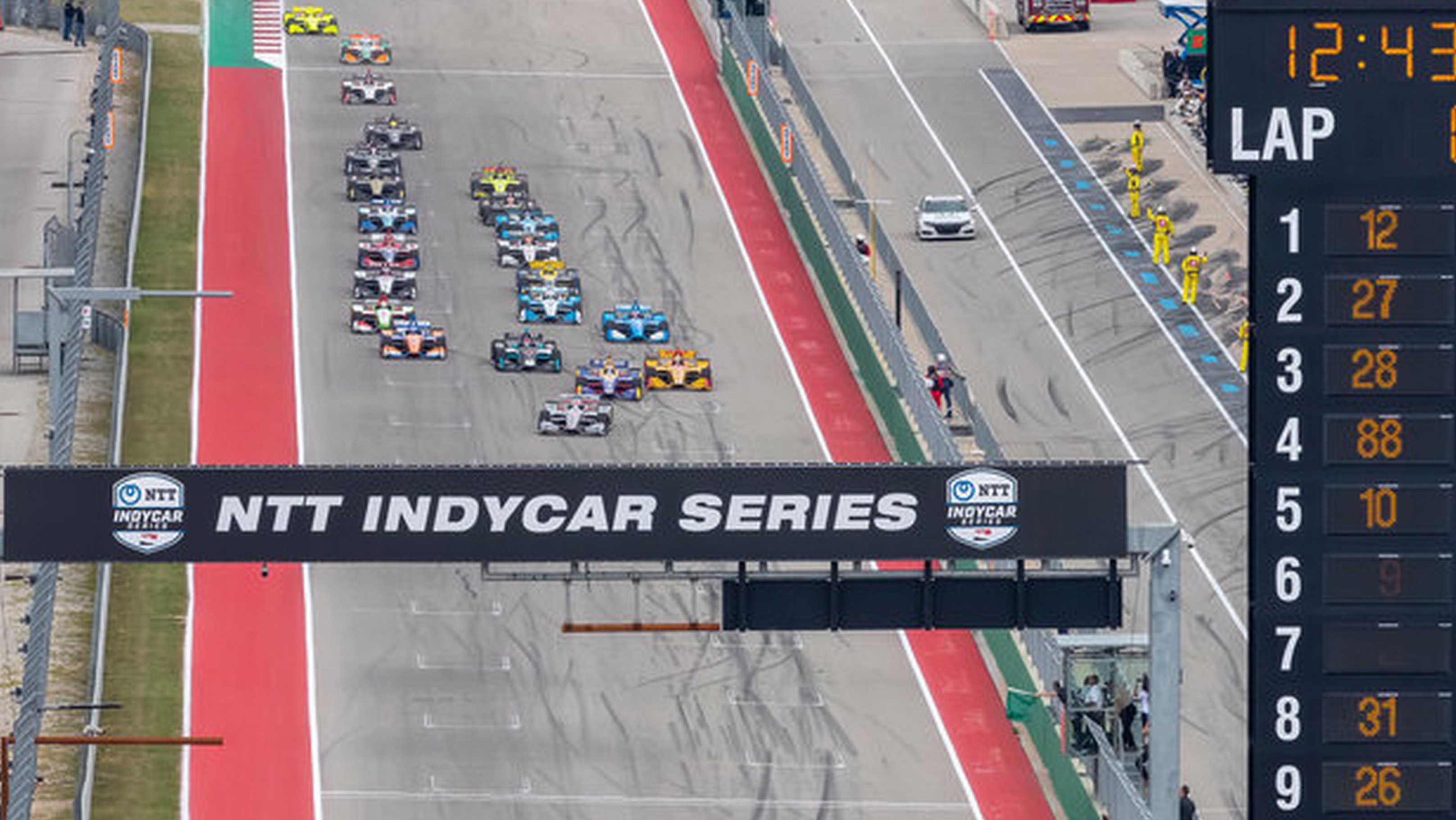 PIT STOPS: I am not going to get into the Rogers debate again. It is what it is. I listened to the first half of the race on IndyCar Radio (thanks, Rob Howden!) and followed the rest on Twitter. I know a lot of people, browned off at Rogers, who were trying to find an illegal stream. I know, because I heard from a bunch of them. Some streams seemed to work, some didn’t. I predict by Long Beach that someone will have The Answer. . . . . . Here’s what else went on in racing this weekend. Oliver Askew of Jupiter, Fla., won both Indy Lights races at COTA this weekend. In the second race Sunday, Dalton Kellett of Toronto was ninth and Zach Claman (De Melo) of Montreal was tenth. The two Canadians didn’t do much better in the first race on Saturday. . . . . . Will Power was understandably upset Sunday when, after leading the IndyCar race from the start, a mechanical gremlin forced him out. He stood to cash a $100,000 bonus cheque if he’d won, after capturing the pole on Saturday. But he was wrong to tear into the officials and the series for the “closed pit” rule. That didn’t cost him the race – the mechanical problem did – and he’s benefitted from that closed-pit rule previously. Right here in Toronto four years ago, in fact. . . . . .  Penske driver Brad Keselowski won the Monster Energy NASCAR Cup race in Martinsville, Va., Sunday. He led 446 of the 500 laps. Chase Elliott finished second while Kyle Busch, driving in his 1,000th national series race, was third. D.J. Kennington of St. Thomas, Ont., was 32nd. For the record, the race had three leaders. . . . . . Busch won his 201st NASCAR race Saturday when he finished first in the NASCAR trucks race. Montreal teen Rafael Lessard finished 14th in that race. . . . . .  Jean-Eric Vergne won the Formula Electric race through the streets of Sanya, China, at the weekend.