Racing Roundup: How to make Virtual Racing really interesting (which it isn’t – it’s a Video Game)

How to make wearing a mask cool, layoffs in the industry and let’s hear it for Bernie Ecclestone!!!

Today’s Racing Roundup will be a bit of a hodge-podge of news, information and comments/rants. Here goes.

Okay, I watched the IndyCar race on Saturday and a bit of the NASCAR race Sunday and I haven’t changed my mind. Despite the efforts of Leigh Diffey, Tracy, Townsend Bell, Mike Joy, et al, I was not watching racing, I was still watching other people play a video game. The TV people like it because it’s content (and how many times, really, can I watch Joe Carter hit that home run in 1993?) but it’s still a video game.

The one positive, of course, was watching Robbie Wickens finish eighth in his first IndyCar “comeback” race. Great stuff. Robbie is showing, time and again, that if you really want something, you can have it – if you work your butt off to get it.

Now, I’m going to tell the producers of these races – iRacing, in particular – how they can make these virtual presentations really interesting. And maybe they can do this now. I don’t know; I’m not a techie. But I’m sure if it can be done, these people would be the ones to do it. And everybody wound stand to make a fortune.

I want to drive in real races. No, not as a scoreboard entrant but for my own satisfaction, from the comfort (and safety) of my living room. This would be virtual reality taken to the max. They could charge me, too. Ten bucks and I could race in the Indianapolis 500 – AS IT HAPPENS. I would start 34th and, through the wonders of technology, I could pass people, or be passed, and make pit stops and so-on and so-forth. If I should crash, I’m out. Done for the day. But maybe I could even win.

One of these days, whether it’s iracing, or some other company, they are going to figure out how to do what I am talking about here. This would not be a game after the fact. This would be the real thing – except, of course, it wouldn’t.

I’ve been thinking about this for years, ever since – it might have been Global – the broadcast partner of the Molson Indy one year superimposed a virtual “bridge” across Lake Shore Blvd. just past Turn 2. That was back in the late 1980s or early 1990s. They only did it once (I don’t know why they didn’t do it again) but it worked.

I think 33 real racing drivers racing against tens of thousands (maybe millions) of living room racing drivers in the Indianapolis 500, or the Grand Prix du Monaco, or whatever, would be absolutely terrific. And think of the money that would go into the coffers of IndyCar, NASCAR, F1 or whatever series. It might very well be the answer to auto racing’s financial challenges in the years ahead.

I have a friend who works in the automotive industry. I think he’s a genius.

We were talking about COVID-19 (what else?) and Pete says: “I see quite a few people walking around now with masks on. Good for them. But then I got thinking . . . if you want many more people to wear a mask, put a sports logo on it. The Raptors, or TFC. Winner teams. 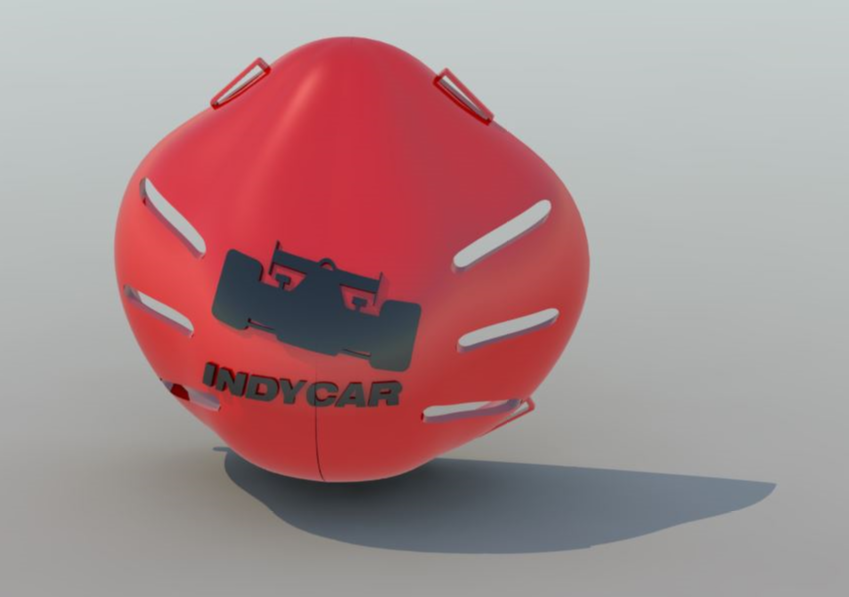 “If you’re an IndyCar fan, you could wear a mask with the IndyCar logo on it (see illustration). Or NASCAR or F1. Perhaps even the individual teams, or drivers. Look, one way or the other, they will run the Indy 500 this year. They moved it from May to August; I figure it will be held in late September or early October. Whenever, can you visualize a couple of hundred thousand people at the Indianapolis Motor Speedway wearing masks that have IndyCar on them? Or Penske Corp? Or the Indianapolis Speedway logo?

“By then the NFL will be going, too. People will want to get out to the games. They will go if they wear a mask with the Patriots or the Bears or the Colts logo. The Bills and so-on.

“Wearing a mask is not cool. Wearing a mask with your favourite sports team on it would make it cool. It will get more people to wear masks and help flatten the curve.

“People are at home with time on their hands. They can sew their own. Some have 3D printers and can make them that way. With the Internet and social media, people will pick up on this within hours.”

Last week, I wrote in this column that I feared some racing teams in all of the big-league racing series in the world, might not survive if forced to remain race ready in case, by some miracle, racing resumes again in 2020.

Formula One, for instance, still lists the Grand Prix du Canada as being the first race of the season, which will be held Sunday, June 14. In normal times, Canada would have been the ninth race of the season. In the end, however, it is only a matter of time before Canada is either cancelled or postponed because the city of Montreal has already called off the Comedy and Jazz Festivals, both of which were scheduled to be held after the Grand Prix.

But rather than scrap the season, which would allow teams to step back, take a deep breath and save money needlessly being spent now to remain prepared to go racing on June 28 in France (in their dreams, I say), F1 doubled down this past week by saying once again that one way or the other, they will run 22 races this season, or as many as possible.

A friend who writes to me frequently, disagreed (I have my critics . . .) and said the reason the seasons haven’t been cancelled is because people have to have hope. He wrote:

“Cancelling all races . . . is probably the most realistic scenario but it deprives us of something to cling to and hope for. Letting there be the small hope that some racing will occur later this year moderates the increasing sense of doom and gloom to a small extent, because you can anticipate something you’re used to resuming. A sense of eventually returning to something normal exists at the end of that long dark tunnel we’ve entered. If you cancel everything, then the sponsorship money stops flowing immediately with no chance of any return and more people would be without work longer and there would be absolutely nothing to look forward to.”

I hear what he’s saying and I want to see racing too. But I can’t see it happening and there’s trouble ahead already.

I suspect sponsorship money has already stopped. Some F1 drivers – Carlos Sainz and Lando Norris are two and there could be others – have taken pay cuts so that support staff (engineers, mechanics) can continue being paid. IndyCar, the Indianapolis Motor Speedway and NASCAR have all laid off staff. The situation is dire.

I have a friend who’s on the school board of a community north of Montreal. We were talking the other day and he said this: “Some of the politicians and the principals are saying school might be back in by May or June. I can tell you now that the earliest that’s going to happen is September – if then.”

You hear things like that and you say to yourself: “How can there be racing in 2020?”

British people, for one reason or another, still think it’s hilarious to play April Fool jokes. North Americans think they’re funny till we turn 10. Then they’re not funny after that.

So a friend called me on Wednesday, which happened to be April 1, and he says: “Hey, did you hear Formula One has been sold? To the Disney Corp. for $4-billion. They’re going to take the old oval at Disney World in Orlando and turn it into a road course for F1 and IndyCar.”

I hesitated for a second. You know, I thought, it could be true. Liberty Media, or so I’ve been told, is not really happy owning F1. It hasn’t been as easy as they thought it would be and they’re not making the money they thought they’d make.

“Where’d you see this,” I asked my friend? “It’s on a racing site called wtf1.com,” he said. Then the penny dropped.

There was silence on the line. “Oops,” my friend said.

Then, the next day came word that Bernie Ecclestone is about to become a father again, at age 89. The U.K. tabloid newspaper Daily Mail reported this. So I looked at the date on the story: April 2. Hmm, I thought. Maybe it was an April Fool that didn’t get posted till a day later, because that sure sounds like a tall tale.

But it’s true. Bernie’s daughters, Tamara and Petra, have confirmed that the former owner of F1 and his much younger mate, Fabiana Flosi, who’s 44, are expecting in July. They also noted that the couple have been trying for a baby since they were married in 2012.

Former McLaren boss Ron Dennis and his family have donated $1,750,000 (that’s the Canadian equivalent of one million British pounds) to fight COVID-19. Bravo! And remember how many charities Michael Schumacher supported, topped by his donation of $10 million to disaster relief following the 2004 tsunami caused by an earthquake in the Indian Ocean? Two from F1, steppin’ up.

I’m not someone who’s impressed by people trumpeting their generosity. I think we all have a role to play in the world, starting in our own community. I love people who volunteer their time and don’t boast about it. Having said that, if you have more money than you know what to do with, now’s the time to write a cheque.

It will be interesting to watch how fans of the four big North American sports – hockey, baseball, NFL football and basketball – react to their heroes if or when play resumes. Why? Because questions will be asked about what they did to contribute to the fight against COVID-19.

During his career, Michael Schumacher donated millions of dollars to UNESCO, built a school in Senegal, built a clinic in Sarajevo for child victims of the war in the Balkans, built a hospital for homeless children in Peru that provides them with food, treatment and education, and donated millions to UNICEF.

Except for the tsunami contribution, few people knew about the other largesse.

Professional athletes in North America are paid millions of dollars each year to play games two or three times a week for seven or eight months. It would be nice to hear if some of them – hell, the vast majority of them – are doing exactly what Michael Schumacher did, back in the days when he could.

I don’t think we should be holding our breath.