Racing Roundup: How real is Formula One feud?

Will Lewis wear rainbow helmet in Saudi Arabia? Kyle Larson to check out F1 – and all the news

Join the Conversation (0)
When a team doesn’t hoist the Stanley Cup by the first week of June, I figure the hockey season has gone on too long. I’m starting to feel the same way about Formula One racing.

There are two races remaining in the 2021 season and they won’t be held till December. That’s crazy. Next year, they’ll wrap things up in November, which is when NASCAR throws its last chequered flag. Still late but okay, I guess.

Everybody else is finished – except the U.S. Auto Club (USAC) National Midget Series, which will wrap up this Thursday night in California with the running of the Turkey Night Grand Prix at Irwindale Speedway. There was no race a year ago because of COVID and most of the races in the years leading up to the cancellation were won by NASCAR stars Christopher Bell and/or Kyle Larson, both of whom started their careers in the midgets. They’re both entered again.

But back to Formula One. You get the feeling that even some of the participants are getting tired. How else to explain all the nonsense that’s being going on the last few weeks in which one team accused another of cheating. That’s pretty serious. It might explain why Toto Wolff of Mercedes is acting as if the charges are a personal affront. But Christian Horner, the guy making the accusations, always seems to have a twinkle in his eye. It’s as if he knows that what he’s saying isn’t true but he’s doing it to keep the spotlight on the sport. Always remember: these guys are in business together and they might do some back-and-forth but, in the end, the sport – and their livelihoods – depend on how many people are watching and how much money is being invested.

The sport needs all the help it can get. Lewis Hamilton won – again – Sunday in the first Grand Prix of Qatar. He was never headed. Lights out and he was gone. Max Verstappen was second and, in probably the best story of the weekend, Fernando Alonso was third. Our Lance Stroll had a good race and finished sixth while Nicholas Latifi was running 15th when he had a blowout and wound up behind the wall. He was classified 19th. Lewis is eight points behind Max for the driver’s title; Mercedes holds a five-point edge for the constructor’s championship. For a complete story, please click here: https://amp.formula1.com/en/latest/article.driven-hamilton-says-theres-no-time-for-celebrations-after-qatar-win-puts.yg7KDBn8ziojwBwBqaV7c.html


Lewis Hamilton wore a newly painted helmet in Gay Pride colours in support of the LGBTQ2S+ community. That was nice to see. But he wore it in Qatar. Will he wear it in Saudi Arabia Dec. 3-5? We’ll find out.

Kyle Larson, the NASCAR Cup champion who is the best race driver in North America today, will attend one of the two remaining F1 races as a guest of Haas F1. I really hope he goes to Abu Dhabi in the UAR. Saudi Arabia is a place where they murder, torture and – although it was in Turkey – dismember people. You never know. Look what China has done to their female tennis ace. (Can anybody explain to me why we have anything to do with that country? Tigers don’t change their stripes. Back in the Sixties, I wrote stories in the Globe & Mail about the Great Leap Forward and the Red Guards, who were turned loose by Mao to murder their next-door neighbours. Hundreds of thousands were killed. Maybe millions. And Reuters correspondent Anthony Grey couldn’t leave his house. One night he answered a knock on the door to find the Guards had hung his cat. Lovely people.) 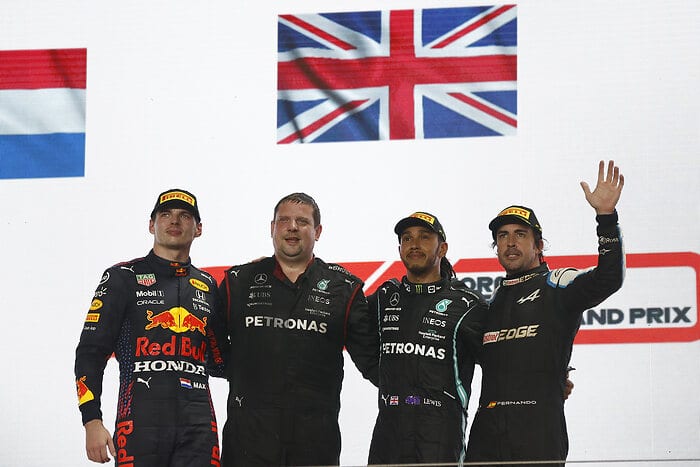 Brothers Andre and Rene Leblanc drove their Four Star Motorsports-prepared Subaru WRX STI to victory in this weekend’s Lincoln Electric Rally of the Tall Pines near Bancroft. They are back in the lead of the Canadian Rally Championship with one rally remaining. Meantime, Jerome Mailloux and Olivier Martel drove their Test Racing Subaru WRX STI to victory in the Tall Pines to win the Eastern Canadian Rally Championship. The rallies were held simultaneously.

Ron Capps, who won the 2021 NHRA Funny Car Championship, announced at the weekend that he was leaving Don Schumacher Racing. After 17 years and two championships, Capps said he was moving on. He gave no indication of where he would race next year. It has not been a good month for the Schumacher team. Besides Capps, Antron Brown, Matt Hagan and Leah Pritchett all said they were leaving, Brown to set up his own Top Fuel team and Pritchett and Hagan to drive Top Fuel and Funny Cars for the new Tony Stewart drag-racing team.

Plan now to attend the June 16-19 VARAC Vintage Grand Prix weekend at Canadian Tire Motorsport Park next season. There will be a Steam Whistle roving paddock dinner, a free rock ‘n roll show and a banquet. Sounds like fun.

Christian Horner questioned the yellow flag being shown in final qualifying Saturday when Pierre Gasly’s car suffered a blowout as the cars were on their final lap. Hamilton was past the marshal station when this happened, but all others had to lift, thus guaranteeing him the pole. I was watching in my family room and said, out loud, “What’s with the yellow? He’s well off the racing line. There’s no reason to wreck everybody’s lap.” Max didn’t lift, which earned him a five-position grid penalty. Horner called the flagger a “rogue marshal.” That got him a threat of retribution and to get out of it he had to apologize and promise to go to marshal school next February.

I don’t know where these marshals get off. The NFL will throw a flag and then have a huddle before announcing there was no foul and pick it up. That’s what should have happened Saturday. Mistakes get made. But those folks are all-powerful, and are also perfect, it seems. I’m reminded of the first Molson Indy Toronto in 1986. On driver’s right going into the first turn (Princes’ Gates), the retaining wall concrete blocks were up against the street curb except right at the corner by the Gates where there was a slight gap.  This young woman marshal came up to me (I was “policing” the corner) and said the gap had to be eliminated or she wouldn’t allow the race to start. I said, “Are you out of your mind?” She said she didn’t care and to get it fixed (which was impossible) or no race. I went and got a guy from the British Automobile Racing Club (BARC), which was in charge of marshals and other track workers, and asked if she could really do that. “Yes, she can,” he said, “but I’ll look after it,” and had her moved to another marshal’s post.

There is something wrong when a marshal – she wasn’t more than 20 or 21 – can put a hold on a race that was on international television with 60,000 people in the stands and featuring the creme de la crème of IndyCar racing. There would have been nothing wrong if she had summoned the chief steward to voice her concerns but that she had to power to act arbitrarily was (at the Molson Indy) and is (an unnecessary flag in Qatar) nuts.

QUOTES: (Latifi, of Toronto, after Saturday qualifying) – “Both the car and lap felt good today, and I really enjoyed driving this circuit; it was actually one of the most fun qualifying sessions of the year. It’s a bit disappointing not to see that feeling reflected in our pace, especially as I expect qualifying position will play a key part in the race tomorrow.”

(Stroll, of Montreal, after the race Sunday) – “The car felt very good today and I am very happy with our performance. I made up a couple of places on lap one and over the first stint it was clear that we had pace to perform well. I overtook Tsunoda on 75 the mediums and then, after catching the guys ahead, undercut Sainz to move into sixth after stopping for the hards. Overall, everything went perfectly for us today and scoring eight points at the end of this triple-header is a very satisfying reward for all our hard work.”

The 15-episode x 15-minute series takes viewers through Season 7 of the ABB FIA Formula E World Championship, revealing what it takes to deliver international motorsport against the backdrop of challenges imposed by the global pandemic. Viewers will see how drivers, engineers, team crews and executives are pushed to the limit in Formula E’s first season operating as an official motorsport FIA World Championship. From the season opener in Diriyah, Saudi Arabia, to the climax in Berlin via Rome, Valencia, Monaco, Puebla (Mexico), New York and London, the Formula E: Unplugged cameras capture the triumphs and challenges of life in the Formula E paddock.

Well, IndyCar gets left behind again. There was a lot of chatter last season about how IndyCar had to take advantage of the success F1 enjoyed with its Netflix series and how IndyCar had to try the same thing. If they’d done it then, great. Now, it would just be pandering. Kinda like Turbo. Remember how the movie Cars was really just a big advertisement for NASCAR? So, IndyCar paid Dreamworks to produce Turbo, which bombed. They should have waited, and then done it. I should be in marketing.

Speaking of Formula Electric, how come Tesla doesn’t have a team in the series?