Racing Roundup: Honda Indy not wise to push too hard

Before I get to the NASCAR and CTMP weekend racing – you already know who won anyway (Kevin Harvick NASCAR, Alex Labbe CTMP virtual) – I have to deal with this.

Nobody wants the Honda Indy Toronto to happen more than me. In one way or another, I have been part of this race since 1986, the year it started.

In recent years, I have been an accredited reporter, covering the race as part of my automotive writing work at the Toronto Star. But in the early years of the race in Toronto, and then the Molson Indy Vancouver years and the Champ Car World Series races in Edmonton, I worked as part of the communications team with specific responsibility for accredited photographers.

We are in the midst of a coronavirus pandemic of almost Biblical proportions. The world has been brought to its knees by COVID-19. Much of civilization has been on lockdown – although people are starting to come up for air, which is a mistake in my books. One false move and the next lockdown will last until Christmas.

And that’s what’s got me worried: one false move.

Toronto is a beehive of activity in the summertime. The Gay Pride Festival, the Honda Indy, Caribbean Festival, Taste of the Danforth and the Canadian National Exhibition are the Big Five. There are dozens of others scattered here and there – the Beaches Jazz Festival, for instance – but those first five are the biggies.

Gay Pride, Caribbean Festival and the CNE opted to cancel their events unilaterally. Last week, the city cancelled everything else. But the Honda Indy insisted its event wasn’t cancelled, merely postponed, and announced it was working with IndyCar and the city to find another date later this year.

I don’t blame the race owners for not giving up. They are convinced – and I agree – that it’s imperative to hold a race, if it’s possible. Look to the Blue Jays for proof of that. From 1977 till 1994, whenever the Jays played, first at the CNE and then the Skydome, the games were always (or nearly) sold out. Then, when the players went on strike in ‘94, there was no World Series and after they finally settled the dispute, the Skydome has been half empty ever since (other than Opening Day and the playoffs). That’s because people found other things to do when they couldn’t go to a ball game.

The last time there wasn’t a race here in Toronto, in 2008, it damn near killed it. People say the low attendance was because the talent level was watered down because of the IndyCar civil war that was raging at the time but they forget that the talent pool had been watered down for years previously (remember Dan Clarke? Alex Figge?) and they still drew a good crowd on race day.

So a year without a race can be, shall we say, difficult. On the other hand, to push on regardless when all others have thrown in the towel can prove to be negative because the efforts could be viewed as selfish. In short, people are sick and dying and everything else has been called off and the Honda Indy is still trying to hold a car race.

I think a cultural difference might be at play.

Canadians and Americans are similar in that most of us speak the same language, dress the same way, drink the same beer and booze and frequent the same fast-food stores. We listen to the same type of music, watch the same movies and TV and drive the same cars and trucks.

But our DNA contains genetic information carried down for generations by descendants of the United Empire Loyalists, who came to Canada during the American Revolution. We are loyal to the Queen (well, most are), God (ditto) and good government (everybody) and we do what we’re told. If the prime minister says to stay in, we stay in. Yes, there are Libertarians among us but they complain from inside the house, not outside it.

Americans, on the other hand, remember the Boston Tea Party, the guns of Lexington and Concord and the Declaration of Independence. They are individuals while we are a collective. Yes, most Americans will stay in when asked, or wear a mask, or practice social distancing, but when push comes to shove, they don’t like government telling them what to do and it’s in their DNA to push back.

All of those major summertime festivals I listed above are Canadian attractions operated by Canadians, except one: the Honda Indy, which is owned by Americans. The Canadians, very aware of what our health authorities and politicians are saying about going slow and easy, opted to cancel; the Americans – perhaps not aware, understandably, of the nuances that separate our two countries – have kept their foot firmly on the throttle.

If Honda Indy Toronto can find a date later in the summer or fall that’s suitable for IndyCar and the city of Toronto, and are willing to race without spectators (I guarantee the city will not open the floodgates for the Honda Indy), then I will be as happy as every other fan of this iconic event.

But this is also Toronto. At some point, if it becomes obvious that to hold the race would be a losing proposition, I trust Green Savoree Racing Promotions, owners of the Honda Indy, will retreat gracefully. Be good corporate citizens. Talk about concern for health and that we’re all in this forever.

It’s better to live to fight another day rather than take a chance on pissing off the very people, who, once incensed because you don’t see the light in the same way they see it, might wind up trying to run you right out of town.

While I, along with millions of other people, had been looking forward to this resumption of racing, it didn’t take long for boredom to set in. For me, anyway. Oval-track racing, with the exceptions of Daytona, Talladega, Indianapolis, Texas, Charlotte, Bristol and Martinsville, is so 1950. It’s such a shame that NASCAR didn’t choose to open on the roval at Charlotte, for instance, instead of Darlington, where I was starting to nod off after about 20 laps.

Round and round and round. It was like watching a hockey game from the 1920s when the rules made it illegal for goalies to fall down while trying to stop the puck. Every professional sport in North America has made adjustments to make their show more enjoyable except NASCAR. Attendance at races has been down, as have the TV ratings. It doesn’t take a rocket scientist to figure out why.

Meantime, the announcers – Mike Joy, Jeff Gordon and Larry McReynolds – did their usual excellent job but, as usual, when they went a little overboard they paid for it. After saying once, if not a thousand times, how responsible everyone was being, with the masks and the social distancing, there was a caution and they had to fill some time. So the camera showed the Earnhardt Towers, where the media work. And there, on the roof, were a couple of spotters, standing right beside each other, having a good ‘ol chat. . . .

It took about half a lap for one of the 40 starters to crash – Ricky Stenhouse Jr. And then Jimmy Johnson misjudged the speed of the car in front of him and, while leading the race, hit that car and crashed himself out of the contest. Everybody can be a little rusty, but . . .

Matt Kenseth made his return to the cockpit count by finishing tenth, which was pretty incredible. He’ll finish the season for Chip Ganassi after Kyle Larson got himself fired. Ryan Newman was 15th in his return after nearly being killed in the Daytona 500. Why come back? Because racing is an addition and he's clearly addicted.

The Cup regulars will now race Wednesday night, again at Darlington, before going to Charlotte for another pair of races starting with next Sunday’s Coca-Cola 600. Oh, the Xfinity Series will race Tuesday night and all these races will be on TSN.

Meantime, with the Victoria Day Speedfest cancelled because of COVID-19, Canadian Tire Motorsport Park promoted some virtual races this weekend featuring regulars from the NASCAR Pinty’s Series, as well as a few guests.

It was on TSN right after SportsCentre Sunday, which followed the NASCAR race at Darlington. Called the Castrol 150 presented by Canadian Tire, the “race” was won by Alex Labbe, with the Lapcevich brothers, Cayden and Treyten, second and third. Sports car ace Daniel Morad, who was winning handily, inexplicably drove right off the track in “Corner Ten” with only a few laps remaining but recovered to cross the finish line fourth. Teenager Kyle Steckly, son of four-time national champion Scott Steckly, was fifth.

In a post-race interview, Cayden Lapcevich had fun referencing his father Jeff’s difficulties in winning a NASCAR race, pointing out that by finishing second, he was right where his “Pop” always wound up.

It was good “crowd” but I’d expected more. However, it was an old iRacing layout – the Castrol Tower, which hasn’t been on the inside of Corner 10 for years - was still standing and the new Event Centre was nowhere to be seen but it didn’t take away from the “racing” and that was all that was important.

Before I go, next Sunday, when the NASCAR Cup Coca-Cola 600 will be in all its glory, live and in colour on FOX, NBC, which has the contract to shows IndyCar races will show four hours of last year’s Indianapolis 500. This is a great idea – but it’s the wrong race. First, there have been more than 100, so why last year's? Second, Simon Pagenaud dominated, which wasn’t terribly exciting. Why not replay the 100th anniversary race, when Alexander Rossi was a surprise winner and our James Hinchcliffe started on pole a year after nearly losing his life there? Or a race from the 1990s, when there was lots of controversy.

But then I remembered: Pagenaud drove for Roger Penske and Penske owns everything about Indianapolis now. So that explains the replaying of last year’s race.

ESPN, which we don’t get, is doing it right. Next weekend is Memorial Day Weekend in the United States when Sunday is traditionally kicked off with the Monaco Grand Prix, followed by the Indianapolis 500 and the Coke 600. ESPN plans to show the 2018 and ’19 Grands Prix and 2006, 2011 and 2014 Indy 500s. 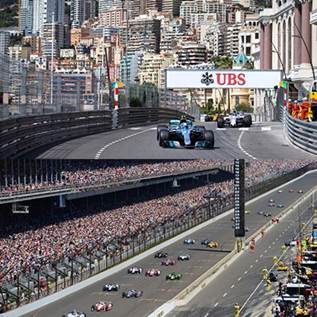 The 2006 race was when Sam Hornish Jr. just nipped Marco Andretti at the Yard of Bricks (something that I still find highly suspicious . . .), 2011 was when J.R. Hildebrand crashed on the last corner of the last lap and a surprised Dan Wheldon drove past his crumpled car to victory and 2014 was when there were 34 lead changes among 11 drivers in one of the most exciting 500s of all time. Ryan Hunter-Reay passed Helio Castroneves on the last lap to win it.