Here is the story on Sebastien Bourdais losing his ride at Dale Coyne Racing.

The “negotiation” that Coyne talked about last Friday in announcing that Bourdais would not be back with the team in 2020 involved the Honda engines for Bourdais’s car. Whether it was with Honda directly, or with a sponsor or sponsors who would pay for the engines, I don’t know but I do know this: the engines Bourdais used in 2019 were free; somebody would have to pay for the ones he would use in 2020.

Sebastien Bourdais is one of the most successful IndyCar drivers of his generation. He was 2003 CART Rookie-of-the-Year and the Champ Car World Series champion four years in a row (2004-07). In total, he has won 37 Indy car races. What this means is that he gets paid to race; he does not pay to race.

Which explains the parting of the ways. But who will take that seat?

The word on the street is that our own James Hinchcliffe has a Honda engine lease. Translation: free engines. Will that be enough to get him into that ride at Dale Coyne Racing? Or another team? Time will tell.

It’s interesting this has come up. Is big-league auto racing either having, or about to have, a case of the guilts over its economic model?

There is not another major team sport in the world where the players have to pay the owners. I have written about this ad nauseum. What would the reaction be if the Maple Leafs announced they had signed Mitch Marner to a three-year-contract in which Marner would pay the Leafs $10 million the first year, $7.5 million the second and $5 million the third to let him be centre on the first line? People would say, “Are you crazy?” And, of course, they would be right.

Even Lewis Hamilton is getting into the act. He says it is getting harder and harder for “working class” drivers to get to the top in Formula One.

“I’ve got a friend of mine who was nearly in Formula One and then he got leap-frogged by a wealthy kid and then his opportunity was gone,” Hamilton said, who added that he wants to work with the FIA as well as F1 to encourage drivers from less-wealthy backgrounds be selected over rich kids.

We’ll see about that. Where, once upon a time, Formula One and IndyCar teams employed squads of people tasked with finding the necessary funding to finance operations and pay the most talented drivers, owners have found it easier to just wait for racers with money to pony up in order to drive their cars.

In IndyCar, today, Roger Penske is the only owner left who pays his drivers with no strings attached. Newman-Haas did, but the owners are dead and the team died with them. Team Kool Green did, until it became a victim of the anti-tobacco crowd. Chip Ganassi paid everybody once upon a time but now, other than Scott Dixon’s, his rides are for sale too.

Will Hamilton be able to influence people in F1 to hire drivers on the basis of talent rather than how much moolah they have in their pockets? Will Penske, who now owns IndyCar, shame other owners into taking a lesson from his playbook?

Probably not in the short term but both are powerful men and used to getting their way. Once they start something, they like to see it through. We can only hope.

Congratulations to three-time NASCAR Pinty’s Series champion Andrew Ranger of Roxton Pond, Que., who was honoured Saturday night at a banquet at the NASCAR Hall of Fame in Charlotte, N.C. (That’s Andrew and his wife, showing off his NASCAR championship ring.) All of NASCAR’s “Home Tracks” champions were honoured. 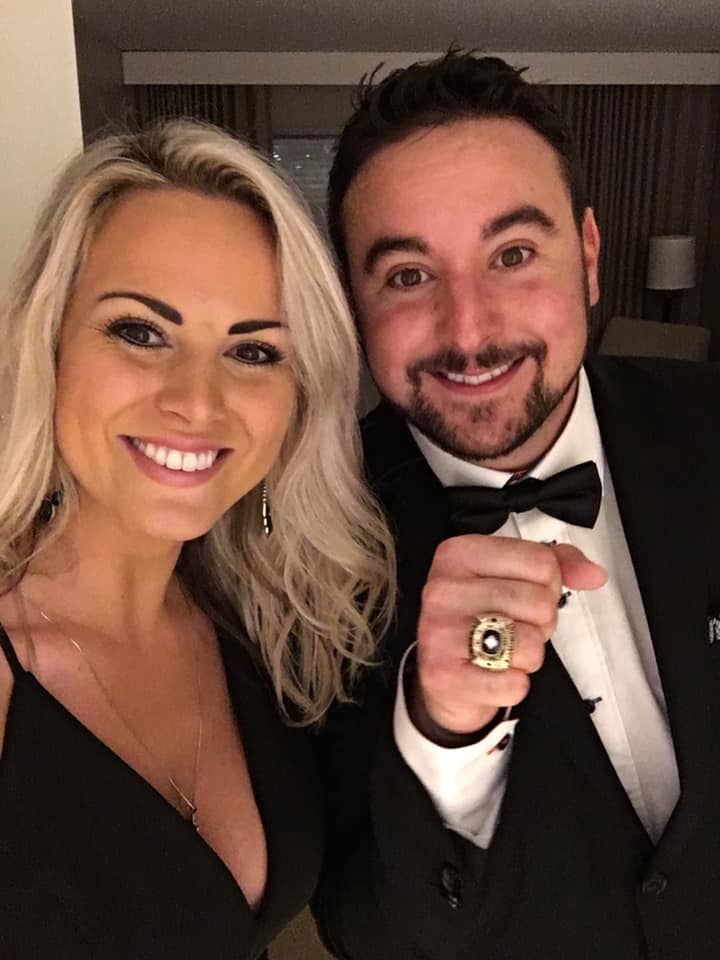 It’s nice to see this happen but, one more time: why is the Canadian NASCAR Pinty’s Series champion not honoured in Canada? When Canadian Tire was the sponsor, the first national champion, Scotty Steckly, was crowned at a banquet in Toronto (Markham, actually, but you know what I mean). Vic Rauter of TSN was MC and there was cross-Canada attention. That was the last banquet. For a few years, there was a cocktail party but then NASCAR insisted all its “regional” championships be honoured in one place and, ever since, Canada’s national champion has been crowned in the U.S. Which gets no, repeat no, coverage in Canada. If NASCAR wants to grow this championship, it has to do it up here, not down there. 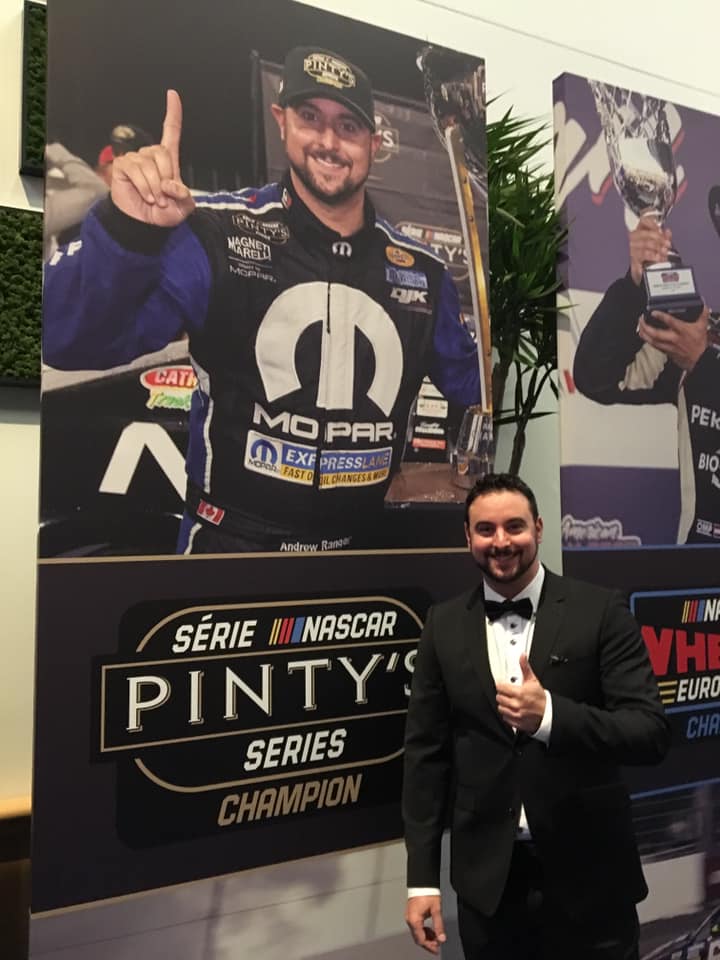 Megan Gilkes, who represented Canada in the first season of the W Series championship – a for-women-only dsingler-seat nseries whose aim is eventually to get a female into Formula One – has been awarded the 2019 RaceOntario Wayne Kelly Memorial Trophy, which is awarded annually to the Ontario Region club member who has brought special recognition and prestige to Ontario Motorsports. Congratulations!

And big thanks to NASCAR and the CASC for the news releases about Ranger and Gilkes. . . . . .

Jimmie Johnson announced his retirement last week – after one more year. It would be nice to see him go out the champion he is. For that to happen, owner Rick Hendrick would have to reunite Johnson with his long-time champion crew chief, Chad Knaus. They were a team that won seven NASCAR Cup championships together. Let’s hope it happens.

The Formula Electric season is upon us (who knew; who cares?) but this column’s job is to be as fully up to date on all the truth and rumours as possible, so here goes. Sam Bird in an Audi won the first of two weekend races Friday in Diriyah, Saudi Arabia. (Don’t you just love the fact that the world’s biggest oil-producing nation – after the U.S., I guess – hosts Formula E races?) Andre Lotterer was second in a Porsche and Stoffel Vandoorne was third for Mercedes-Benz. On Saturday – a highlight was throwing the green flag while marshals were still on the track . . . . . – Alexander Sims was first in another BMW, Lucas di Grassi was second for Audi and Vandoorne was third again for Mercedes. Sims’ teammate, Max Guenther (pictured) finished second in the race but was penalized 24 seconds by the stewards for passing while the pace car was on the track. The penalty moved him back to 11th.

In closing, I was embarrassed by the one, single, solitary, CF-18 fighter jet that buzzed the Grey Cup game just as the national anthem ended Sunday night. Are you kidding me? Where were the Snowbirds? Look, this is the Grey Cup! Cold Lake, Alta., which is not all that far from Calgary, is where most of the CF-18s are stationed. Even in peacetime, the pilots have to fly so many hours a month. They have to practice. The military itself doesn’t care where those pilots fly those planes, just as long as they don’t crash them. When the Champ Car World Series raced at Edmonton, the track was laid out on an airport in the centre of the city. The CF-18 guys used to love buzzing the facility – just showin’ off, you know? They’d land and wander over to the paddock to look at the racing cars, then they’d take off and resume buzzing the place. There were always at least a half dozen flying around. So how come some of them didn’t fly over the Grey Cup game? Or are they, just like everybody else in the country (except retail employees) on a five-day week, too. 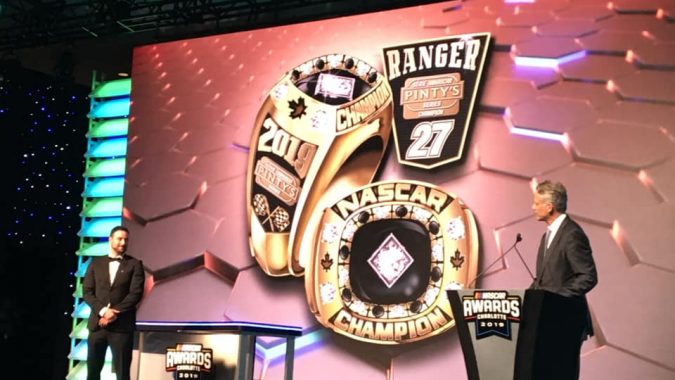