I am writing this from a hotel in downtown Toronto connected to the Metro Toronto Convention Centre, where the 2019 Canadian International AutoShow is well under way.

I have been here for six days now and I have seen the future and the future is now. The world is changing so fast, it is hard to keep up. I do not exaggerate.

Level 2 autonomous vehicles are on the road right now, today. The new president of General Motors Canada, for instance, drives from his home in downtown Toronto to his office every day in a Cadillac and he goes up the DVP and out to Oshawa on the 401 and not once does he have to put his hands on the steering wheel.

Fast-charging networks to power up electric cars are all over the continent now. You don’t see them the way you do Exxon and Shell and Petro Canada (up here) service stations but they’re there and, before long, they’ll be in your face as much as the oil companies are now.

The new president of NASCAR, Steve Phelps, tells the Daytona Beach News-Journal that better times are coming to NASCAR, which he said had “probably lost its way” by turning its back on traditional speedways like Rockingham and North Wilkesboro in the Carolinas in favour of places like Las Vegas and Auto Club Speedway in California.

“I think we were trying to search for that next-generation fan … and I don’t think we listened to what the hardcore fan wanted,” Phelps told the newspaper, adding, “those days have ended.”

He’s got to be kidding. The hardcore NASCAR fan is now 75 and as bored with cars going round-and round forever as younger people are. Has Phelps not looked at race tracks where NASCAR races these days and not seen thousands of empty seats? (Daytona, like the Indy 500, doesn’t count; they are iconic events that will always draw a crowd. The acid test is when NASCAR races at places that aren’t Daytona. If the seats are filled, I’ll be wrong. If they aren’t. Phelps will be wrong. I say Phelps will be wrong.

The world is changing and NASCAR, if it is to survive, has got to change with it (as do, incidentally, IndyCar and Formula One. Nobody can afford to stand still anymore or they will be left in the dust).

What do I mean by that? In NASCAR’s case, more short ovals, many more road courses, some superspeedways and one or two 1.5-mile tracks. And except for one or two iconic races, like Daytona, which should stay at 500 or 600 miles, cut the other 500s to 400 miles, and the 400s to 300. And stop the stages. They are stupid and make people angry. One more thing: a roval is not a road course. Road America and Canadian Tire Motorsport Park are road courses. That is where NASCAR should be racing, not on the infields of speedways.

Joe Gibbs, who lost his son J.D. Gibbs during the off-season, was overcome with emotion after the race. “J.D.’s name is on that car,” said Gibbs, a deeply religious man. That’s his number (No. 11). J.D. found him (Hamlin). What happened here is really unreal. I just thank the Lord for letting us be a part of this.”

For a complete story on the race, with statistics and more quotes, please click here. 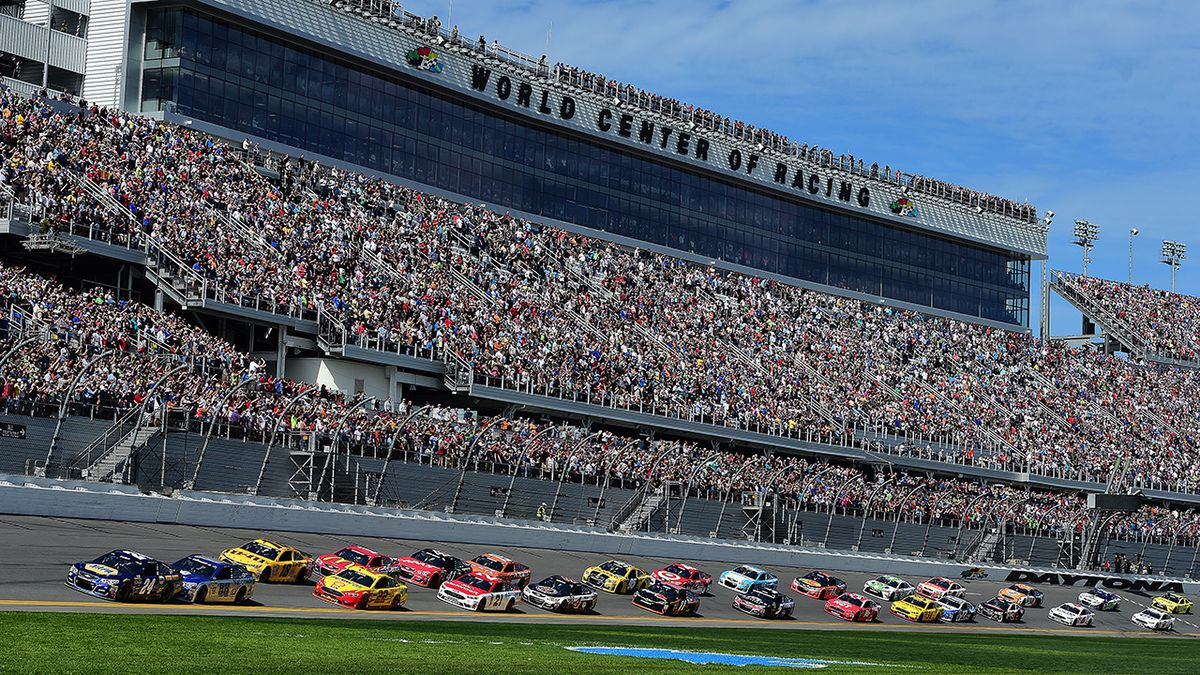 HOT LAPS: Michael Annett won Saturday’s NASCAR Xfinity Series season opener at Daytona. It was his first victory in the series. . . . . . The Monster Energy stock cars had nothing on the trucks Friday night. In a double-overtime epic that more resembled a demolition derby than a NASCAR Gander Outdoors Truck Series race, Austin Hill outlasted the field to win Friday night’s NextEra Energy Resources 250 at Daytona. . . . . . Lucas di Grassi used a last-lap pass on Pascal Wehrlein to secure the victory in Saturday’s FIA Formula Electric event at Autodromo Hermanos Rodriguez in Mexico City. Wehrlein was so busy blocking from side to side on the last lap that his battery went dead and di Grassi zipped past. . . . . . The supercross doesn’t come to the Rogers Centre any more (the Blue Jays won’t let anybody except baseball players touch their beloved grass) but here’s what went on this weekend. Round seven of the Monster Energy AMA Supercross, an FIM World Championship, will go down as the closest 450SX class finish in history after an inspired ride by Red Bull KTM’s Cooper Webb. Webb charged from seventh to take the lead in the final corner in an aggressive squeeze at the top of the final berm to nab the win, and simultaneously the points lead, from Team Honda HRC’s Ken Roczen. The race was held in Arlington, Tex. . . . . . Here is why Fernando Alonso will not win the Indianapolis 500 this May. His team, McLaren, will partner with Carlin for the race. Carlin is not in the same class as Andretti Motorsport that fielded Alonso’s effort last time, when he nearly won. Want to win the Indy 500? You have a chance with Penske, Ganassi or Andretti. Nobody else. . . . . . Speaking of nobody else, Brian Barnhart, president of Harding-Steinbrenner Racing, says the team will only go with one car again this IndyCar season after signing a deal with Indy Lights champ Pato O’Ward to run a second car. On the eve of Indy’s spring training, that deal fell apart. Barnhart denies the team is in financial difficulty. . . . . . Ontario racing series OSCAAR is proud to announce that Matteo’s Pizza & Café will be the presenting sponsor for the Knightsworks Design OSCAAR Hot Rod Series event as part of Sunset Speedway’s Spring Velocity weekend on May 18 and 19.