And all the racing news...

Okay, let’s get a few things out of the way – remembering, of course, that it’s July and two of the really big GTA motorsport shows take place back-to-back starting this Thursday. First out of the gate will be the Mobil 1 SportsCar Grand Prix presented by Acura that will take place Thursday through Sunday at Canadian Tire Motorsport Park north of Bowmanville. The following weekend, starting a week from Friday, the Honda Indy will take place at Exhibition Place near downtown Toronto. More about both below.

Now, I don’t know why people just won’t leave well enough alone. I’m talking about Sunday’s Austrian Grand Prix, won by Max Verstappen. That there was an investigation of a pass made by Max on Chuck Leclerc three laps from the finish, with the result not announced until three hours later, was bad enough. Now the FIA has tried to explain what took so long and rather than clear things up it’s only made it worse.

By the way: I know what happened. I’ll tell you after we listen to the FIA.

According to race director Michael Masi, “The first part was the proximity to the end. The primary part was we didn’t get going until 6 p.m. (the race ended at 4:30), with all the various media commitments with regards to the pen and post-race conference. The hearing itself was about an hour, with all parties involved. Then the stewards deliberated, looked at other cases, precedents, speaking between themselves, by the time you write a decision and attempt to make sure there’s no typos or anything in it, summoning the teams back, delivering the decision to them. . . . time flies a lot more when you’re sitting outside like all of us than when you’re sitting in the room, I’d suggest.

“It was just that they were considering absolutely everything. They had all four people, both drivers and both team managers, in there for an hour.”

This is really what happened. Two stewards said penalty, two stewards said no penalty. Nobody would budge. They tossed a coin. No penalty won. Could have gone either way.

There is no other plausible explanation.

Now, here is the most important story of the weekend.

The Leafs traded Nazem Kadri and will now miss the playoffs next season. Why? No grit. Kadri was the only player with grit and courage on a team made up of ballet dancers.

Seriously (although I was being serious), the motor sport story of the weekend was the debut of Raphael Lessard in the NASCAR Pinty’s Series. If anyone had any doubts about the 17-year-old being the real deal, they were sadly mistaken.

“I didn’t expect it (the win) at all,” Lessard said. “At first, I thought our car was okay, and on new tires it wasn’t great but as the race went on it just seemed to get better and better. Everyone seemed to fall off and we just didn’t. I’m super pumped and can’t thank everyone enough. It’s just awesome to do a deal like this for one race and dominate. I’ve never worked with those guys before. It just feels great.”

The photos of Lessard leading the field and of him all excited in Victory Lane were taken by Matthew Murnaghan for NASCAR. Had to get that in. 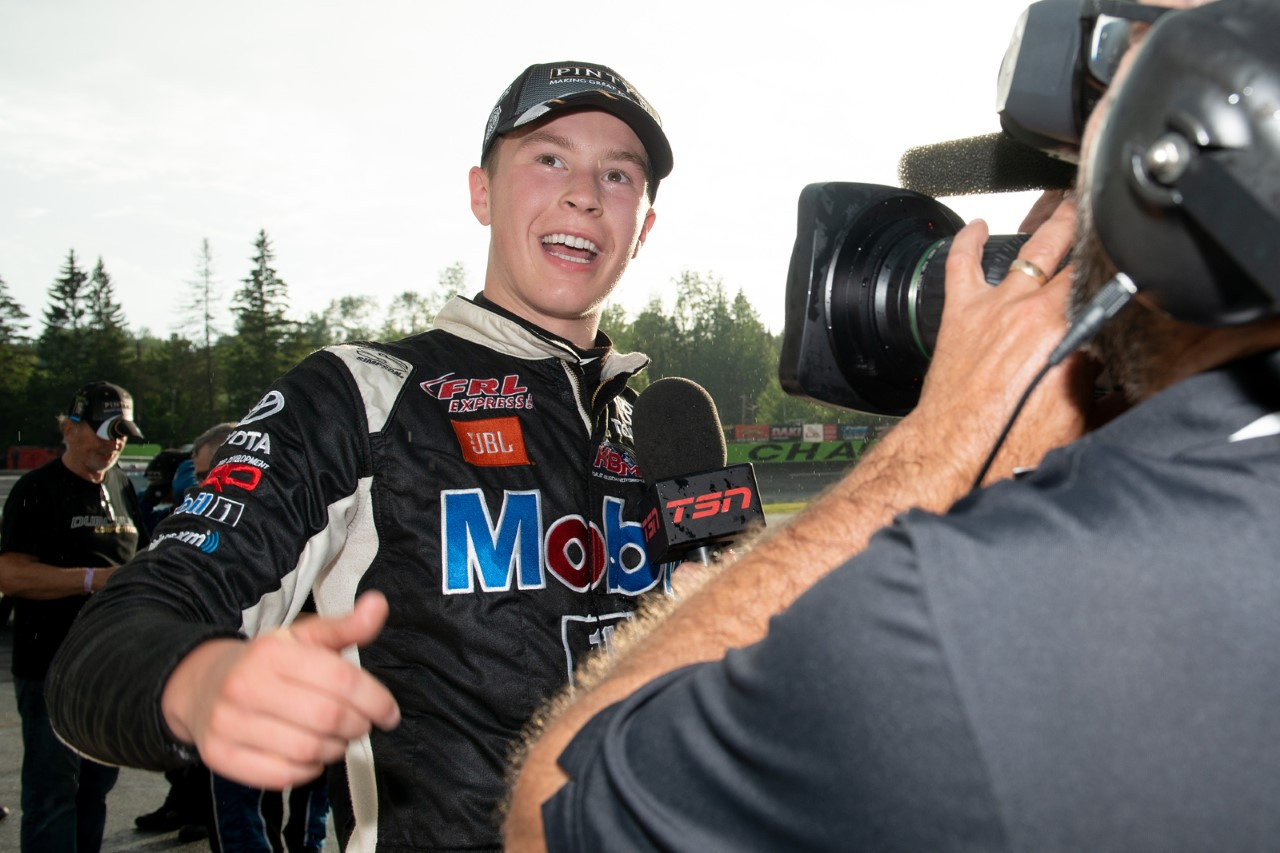 Following strong performances in the season’s first two races, Kevin Lacroix added another podium to make it three in a row and the points earned for finishing second gave him the season points lead. Pole sitter Alex Labbe, who is now back in the Pinty’s Series after racing in NASCAR’s Xfinity Series in 2018, finished third. Andrew Ranger and Alex Tagliani rounded out the top five.

The Budweiser 300 will air on TSN on Saturday, July 6, at 2 p.m. The next race in the stock car series, Canada’s only national auto racing championship, will be on the Saturday of Honda Indy Toronto weekend at Exhibition Place in Toronto July 12-14.

As this Monday Morning racing roundup is appearing on Tuesday, here are some quick hits:

As mentioned above, the Mobil 1 SportsCar Grand Prix presented by Acura will go to the post Sunday at 1 p.m. at CTMP and will be broadcast, for the first time, on the full NBC television network. Last weekend, at Watkins Glen in the Sahlen’s Six-Hour race there, No. 55 Mazda RT24-P DPi co-drivers Harry Tincknell, Jonathan Bomarito and Olivier Pla delivered Team Joest’s first victory in the IMSA WeatherTech Championship, leading a 1-2 sweep. No. 77 Mazda DPi co-drivers Oliver Jarvis – who started the race from the pole position – Tristan Nunez and Timo Bernhard finished second, with Jarvis crossing the stripe 0.353 seconds behind Tincknell. Juan Pablo Montoya and co-driver Dane Cameron, who shared the driving of the No. 6 Acura Team Penske ARX-05 Dpi, finished third.

In the LMP2 class, No. 52 PR1 Mathiasen Motorsports ORECA co-drivers Matt McMurry, Gabriel Aubry and Eric Lux took the class victory by 20 laps (sounds close!) over the No. 38 Performance Tech Motorsports ORECA squad of Cameron Cassels, Kyle Masson and Andrew Evans. It was the second consecutive victory for McMurry, the team, and was especially big for Lux, who hails from nearby Buffalo, New York.

In the GT-Le Mans class, the No. 911 Porsche GT Team Porsche 911 RSR of Nick Tandy and Patrick Pilet made it four consecutive wins for Porsche this season. Tandy had to hold off a hard-charging Antonio Garcia in the No. 3 Corvette C7.R to secure the win, crossing the stripe a mere 0.452 seconds ahead of the two-time defending series champion and his long-time co-driver Jan Magnussen. The No. 67 Ford Chip Ganassi Racing Ford GT of Richard Westbrook and Ryan Briscoe was third.

In celebration of Canada Day, and to help promote the upcoming SportsCar Grand Prix, Kern visited CTMP and set a new production-car lap record in a stock Porsche 911 GT2 RS with a time of 1:22:36.

“We are a performance-oriented dealer,” said Anthony Polito, “and this is a wonderful opportunity to demonstrate that by backing a local racing talent. Kyle along with Nate and KohR Motorsports are proven winners. We are proud to be able to sponsor them and look forward to another great result this year.”

Said Marcelli: “Having the support of a local dealership that understands performance is a real treat. Anthony Polito is a racer himself and understands the business. We are proud to have Polito Ford Lincoln on board for my home event at CTMP where we hope to repeat last year’s success.”

The IMSA Michelin Pilot Challenge race is part of the Mobil 1 SportsCar Grand Prix. The green flag for the 120-minute feature race commences on Saturday at 1:55 p.m.

In an effort to turn around attendance at the Brickyard 400, Indianapolis Motor Speedway announced that qualifying and the race will all take place on Race Day, Sept. 8. The place drew 300,000 for the first Brickyard in 1994 while last year only 30,000 attended. Doug Boles, IMS president, said surveys showed fans wanted more than just a race so the decision to add qualifying followed as a result. Unlike a year ago, when the hometown Colts opened their season the same day, the NFL team is on the road this year and will be playing in California at 4 p.m. That should also help.

In the GT Sport class Saturday, Parker Thompson topped the charts aboard the No. 1 New Roads/Team Speedstar Audi R8 LMS GT4. Damon Sharpe was second in his No. 84 Blanchet Motorsport Toyota GT86. Fareed Ali was third in his No. 41 TWOth Autosport Porsche 997.2 C2S.

In the TCR class, Matthew Taskinen (No. 23 TRC/M1GT Audi RS3 LMS SEQ) and TCR points leader Gary Kwok (No. 66 M&S Racing/Honda Civic TCR FK2) shared the wins over the weekend with Taskinen taking the first win on Saturday and Kwok winning on Sunday. Jean-François Hevey (No. 21 TRC/M1GT Audi RS3 LMS – DSG) was third Saturday; on Sunday, it was Bob Attrell aboard his No. 88 Hyundai Canada Racing/Hyundai i30N TCR (SEQ) who finished third.

Speaking of Larson, he gave it the old college try Sunday at Chicagoland Speedway but he just couldn’t catch Alex Bowman, who won the NASCAR Monster Energy Cup race there. Joey Logano was third, Jimmie Johnson fourth and Brad Keselowski fifth. Click here for a story on the race.

One observation: there was all sorts of rubbin’ ‘n bumpin’ in this race. It’s a good thing NASCAR doesn’t have stewards or it would have taken more than three hours after the race to officially declare a winner. But that’s the point – and F1 had better get the message or they are doomed. Stewards should only be asked for a ruling when something completely inappropriate happens. The sour taste in everyone’s mouths that followed the race in Canada, in which Sebastian Vettel was penalized five seconds for – well – nothing, and the long, drawn-out theatrics that followed Austria on Sunday in which Max’s great win hung in the balance were unnecessary and whether Chase Carey knows it or not, the future of that sport hangs in the balance. As is the case in all pro sports, people don’t buy tickets or turn on the TV to watch the referees or, in this case, the stewards. Beat it. Scram. We don’t want you. Let Max and Chuck and Seb and Lew settle things on the track and not in the boardroom.

I don’t usually single out Canadian racers unless they win, but I will make an exception this week in the case of young Devlin DeFrancesco of Toronto. Competing in the European Formula 3 Series this year, DeFrancesco came agonizingly close this weekend to scoring points in the ultra-competitive series. Good for him and I hope the next time I have him in this column, he’ll be on the top step of the podium.

Motorcycle racer Carlin Dunne died Sunday afternoon when he crashed during the annual Pikes Peak Hill Climb in Colorado. He was the seventh competitor to be killed there. And Matthew Daoust, a hydroplane racer who was leading the points race, was killed Sunday afternoon during a race on the St. Lawrence River at Brockville. R.I.P. to both.

As mentioned above, we’re 10 days out from the annual Honda Indy Toronto and one of the weekend’s most popular attractions, Robby Gordon’s 2019 Circuit of the Americas Stadium SUPER Trucks, are returning for this year’s race weekend. And Russell Boyle of Toronto, who’s raced just about every time – if not every time – the trucks have been on the program, will be saddling up for one more kick at the can. He was at Gordon’s shop in the Carolinas this weekend, getting comfortable in the trucks again and doing some training. He was hard on it right from the start and looks ready to be fighting for a podium, if not the outright win.  Below is a photo of Russell in his office sent to me by father Phil. 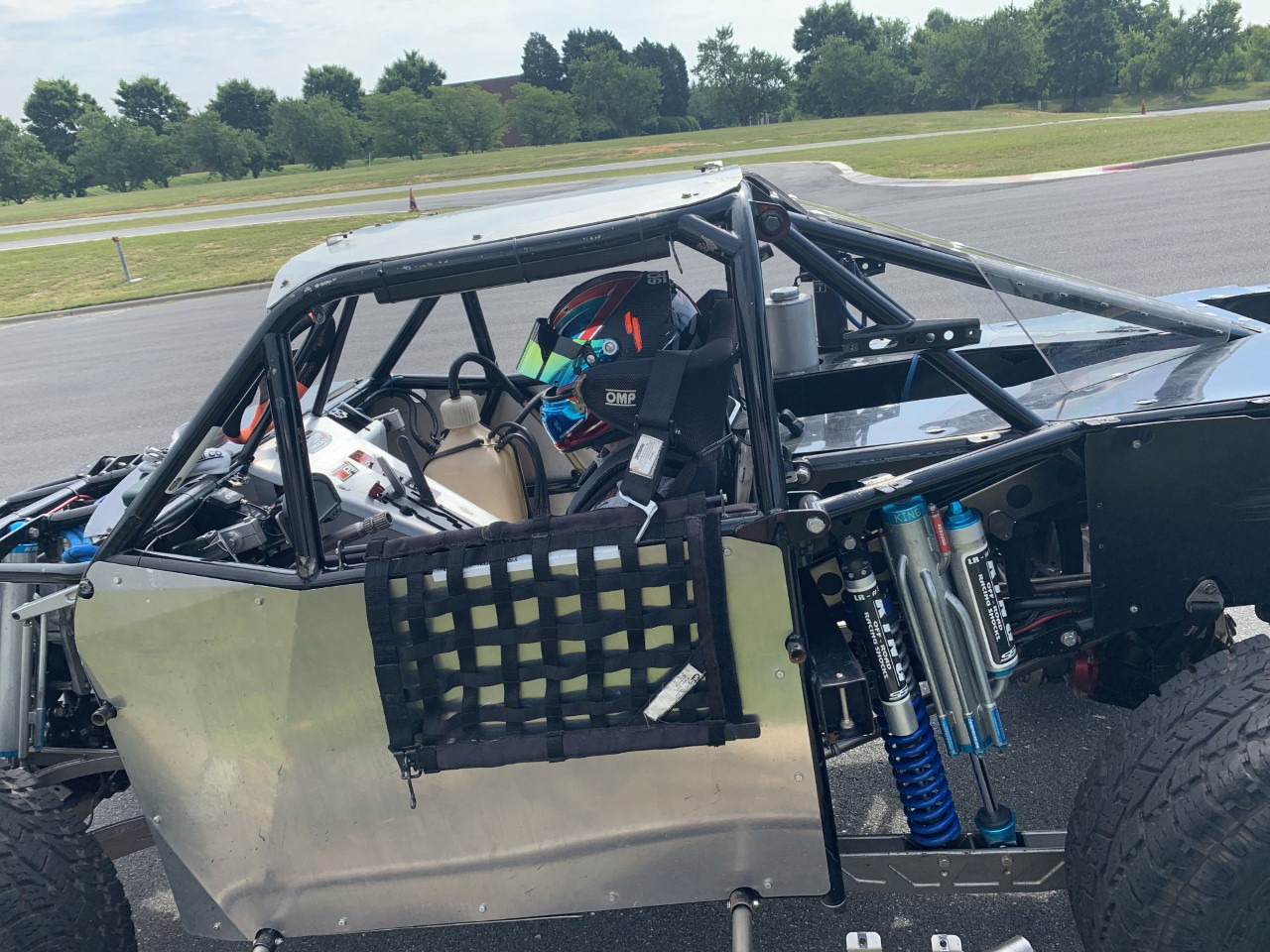