Racing Roundup: Aston Martin is taking over Formula One

Kyle Larson will be unbeatable in NASCAR this year; Latifi has a plan for Year Two and all the rest of the news

Join the Conversation (0)
Several items from the world of Formula One will kick off this week’s somewhat short roundup.

As you know, from reading the weekend’s relaunched Wheels section in the Toronto Star (well, you DID, didn’t you?), the former Racing Point F1 is now Aston Martin F1 (there’s a sponsor’s name in there but I’m not crazy about that) and driver Lance Stroll of Montreal is not only looking forward to racing against his new teammate, four-time world champion Sebastian Vettel, but he even thinks he might be able to beat him.

The ink was barely dry on that pre-printed section when there was more news about Aston Martin. It will now provide the safety and medical cars for all Grands Prix. The medical car, as you all know, chases the field after lights out at the start and tries to keep up in case there is an incident. You can ask Romain Grosjean how important that is so far as driver safety is concerned. And the safety car sits in pit lane in case it’s called upon to pace the field after such an incident to keep it in line for the next start.

Both cars are very important and will replace the Mercedes speedsters that have done that job for years. A specially equipped version of the Aston Marin Vantage, which is the most powerful in the production range, will be used.

Now, also of interest to Canadians, was the launch at the end of the week of the Williams F1 team with Nicholas Latifi of Toronto driving and Sofina Foods of Toronto (Janes, Lilydale, Mastro, Rio and San Benedetto) sponsoring. I maintain that Latifi, throughout his racing career, has taken a year to get used to the car and circuits and then started to show his talent in the second year. In a media scrum (virtual, of course), Latifi seemed to suggest that’s his plan for Year Two in the Big League.

“When you come into Formula One as a rookie,” he said, “it’s a whole new world. It doesn’t matter how much experience you have in previous categories, it is really something quite different. But it is going to be more comfortable for me this year, just having that experience, I’m feeling more at home here. I think in the second year in the sport is where you see the biggest improvements across the span of what I hope will be a very long career. Your first year, there’s always going to be some hesitation. In the second year, you know what to expect and you go into it full force.”

I think Nicholas Latifi is going to turn more than a few heads this year.


I can’t figure some things out. The NASCAR Cup race from Las Vegas Speedway comes on TV Sunday afternoon and here are Chris Myers, Jeff Gordon and Clint Bowyer yucking it up on pit lane and none is wearing a mask and they are not practicing social distancing. Then they split to go upstairs to the booth where Mike Joy is presiding and they do the show shoulder-to-shoulder, without masks.

Did these guys all get vaccinated? Or what? (Maybe they said something at the beginning of the show; I was a few minutes late tuning in. But I have a feeling nobody said anything.)

The drivers all have masks on, which they only take off when they put on their crash helmets and crawl into their cars.

Michael Waltrip shows up and he doesn’t have a mask on either. Because he has to do his walkthrough, but can’t go near the drivers, they send a cardboard cut-out of him to “talk” to the drivers. Hardy-har-har-har.

Waltrip’s walkthrough is dreadful, by the way. I used to think Martin Brundle’s was bad but that was before Waltrip. The best was the late Barry Gill, back in the 1970s. He didn’t try to be a show-off and actually told you something about the drivers you didn’t know. NASCAR needs a Barry Gill, which Michael Waltrip is not.

I think any IndyCar fan out there can’t watch a race from Las Vegas without thinking of Dan Wheldon. The Cup cars can race there because they lumber around compared to the fighter jets that are IndyCars and when they get into trouble, the drivers survive because the cars are built like tanks. Thinking back, and then watching the Cup race Sunday, you come to the conclusion that Wheldon just didn’t stand a chance. I hope IndyCar never goes back. If they do, though, they’ll have to cap the field at 18 or 20 or else they’ll have another disaster.

Meantime, last year, Kyle Larson was kicked out of NASCAR and lost his employment with Chip Ganassi after he used a racial slur during a video racing game. He spent the summer winning every sprint car race in the United States. Or nearly. Now he’s back in Cup.

It’s taken him four races but he won his first stock car race at the Cup level Sunday and you watch: he won’t lose that often this year. In fact, I think he could be champion. Brad Keselowski finished second with Kyle Busch, Denny Hamlin and Ryan Blaney rounding out the top five.

A.J. Allmendinger started his big-league racing career driving an Indy car in the Champ Car World Series in 2005, winning three races. In 2006, he made the move to NASCAR and, with the exception of one run in the Indianapolis 500 and some IMSA starts, compliments of Roger Penske, who fired him from his NACAR ride over a misunderstanding and felt he owed him something, has primarily been a NASCAR driver since.

Allmendinger, who, like many retired or semi-retired race drivers, has carved out a TV career, was signed this season to a full season of Xfinity Series participation with Kaulig Racing. Saturday, he won his first race of the season at Las Vegas, with Daniel Hemrick second and Brandon Jones third. Austin Cindric finished fourth while Noah Gragson was fifth. The victory guaranteed “Dinger” a spot in the Xfinity championship.

For a full story on the Xfinity race, please click here 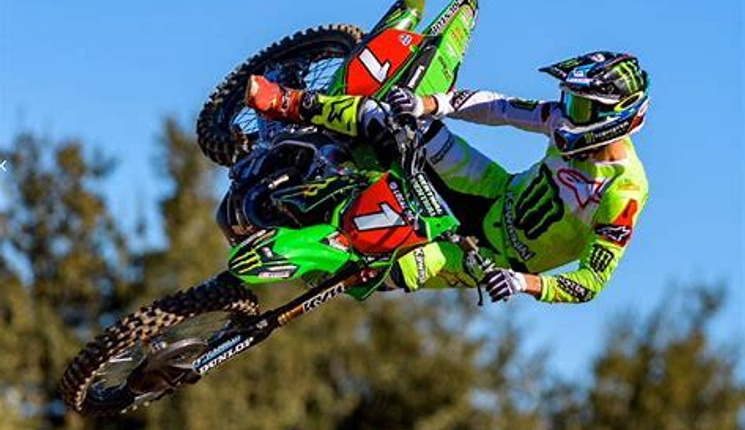 
A true Team Canada will participate in this year’s new Porsche Carrera Cup North America with the announcement that Parker Thompson of Red Deer, Alta., has signed to drive a car for JDX Racing headed up by retired Canadian driver Jeremy Dale. Thompson, 23, who’s a veteran of Formula Ford and Road to Indy open-wheel racing, will drive a Porsche 911 GT3 Cup race for JDX when the Carrera Cup kicks off its 2021 season at the Mobil 1 12 Hours of Sebring weekend in two weeks. Dale, a Canadian whose driving career ended as the result of a wicked crash in 1995 at Road Atlanta before he went on to other motorsport activities, eventually becoming an owner, said he was excited his team will be representing Porsche Canada with Parker behind the wheel. Good luck, you two.

Eli Tomac (see picture) won his fifth Daytona Supercross victory Saturday night . . . . . Pirelli will continue supplying tires to F1 until 2024 . . . . . the 24 Hours of Le Mans will move from June till mid-August in hopes that spectators will be able to attend . . . . . If the promoter of the Canadian GP is smart, he will ask Liberty Media to move the race from June until September. Francois Dumontier needs spectators and there’s a chance – a chance – something could happen later in the year but there is no chance for June. Meantime, my friend Jeff Pappone conducted a completely unscientific poll: 48 per cent said no GP till 2022 while 39 per cent said a GP in June without fans. We’ll see. Meantime, the St. Petersburg (IndyCar) GP will have fans, as did the Las Vegas Cup race on Sunday . . . . . . When Romain Grosjean isn’t driving his Dale Coyne/Rick Ware IndyCar this season, Pietro Fittipaldi will be . . . . . Our one-and-only F1 world champion, Jacques Villeneuve, who also won the Indianapolis 500 in 1995, will race in the NASCAR Whelan Eiro Championship this summer . . . . . Michael Schumacher and the greatest IndyCar TV announcer of all time, Paul Page, have been elected to the Indianapolis Motor Speedway Hall of Fame . . . . . The ringers are coming out for that Cup dirt-track race at Bristol Motor Speedway this season. Remember the days when there were road-course ringers when NASCAR went to road courses like Watkins Glen (that’s how Ron Fellows and Boris Said always had rides)? Well, only a half-dozen of the modern Cup drivers have ever raced on dirt and USAC midget and sprint car racers like Shane Golobic are getting phone calls. . . . .