LAKE TAHOE, CALIF.—Although full-sized truck-based SUVs are not for everyone, and gosh knows they’ve suffered the slings and arrows of the eco-crowd for years, this thick-skinned niche is going nowhere.

Especially here in the U.S., where General Motor’s pair of pachyderms — the GMC Yukon and Chevrolet Tahoe/Suburban — have stomped out a mighty claim: more than 60 per cent of the market in fact.

But this generation (around since 2006) has been long overdue for an overhaul. The 2015 models, arriving later this month, have been revamped from stem to stern.

The faithful can take heart: these full-sizers are still body-on-frame, have a solid rear axle and V8 power, retain the same wheelbases (long and holy cow), and will tow whatever you’ve got.

What they have shed is just about any clue to their elemental layout. These rhinos have come through finishing school with flying colours, and will see a price reduction along with fuel economy gains.

The Yukon lives one step above the Tahoe in pecking order, and this is reflected in the bottom line. In the Chevy camp, Tahoe refers to standard wheelbase and Suburban the extended model. With the GMC, it’s Yukon and the longer Yukon XL.

With three trim levels, two wheelbase lengths, two- or all-wheel-drive and a couple of V8s on the menu, there is a wide range of choice.

The freshly creased bodywork with sculpted sides give this pair a handsomely modern look, with more than just hint of Range Rover in the rear quarters.

The GMC and Chevrolet are distinguished by unique grills, hoods and front fenders. The rear track has been increased by an inch to give the trucks a better stance.

Improved refinement was a big thrust of this makeover. Below decks, the box frame is more rigid, the front end stiffened, new hydraulic engine mounts reduce vibrations, and the stiffer body structure is mounted more securely to the frame.

Although the new models weigh the same as the outgoing ones, about a 10-per-cent gain in fuel economy is realized through better aerodynamics, the introduction of electric steering, and a pair of new EcoTec 3 V8 engines that feature direct-injection, fully variable-valve timing and cylinder deactivation technology. All get a 6-speed auto transmission.

The outgoing model’s interior was about a century past its sell-by date. The new efforts mark a vast improvement in cabin design and quality.

The centre stack is boldly sculpted, with an array of large rotary knobs and buttons, topped with an 8-inch touch screen. There’s a cool hidden compartment with USB port behind the screen — press a button and it rises vertically in a very 007-ish way.

Connectivity is the current buzzword in autodom, so General Motors has ensured its latest MyLink satisfies the smartphone world with such features as text-to-voice, Siri Eyes Free for iPhone and Wi-Fi hub capability.

The major gauges are clearly backlit and the faux wood, metal trim and stitched bits are nicely done. As are the front seats — comfortable and supportive — and the second- and third-row space is generous.

New for 2015 are a suite of available safety technologies, which include adaptive cruise control with collision mitigating braking, blind-spot and lane-departure warnings, forward-collision alert and rear cross-traffic alert.

But here’s the big news for interior functionality. The third row now folds flat into the floor. Although that might not sound like much of a breakthrough, the outgoing Yukon and Tahoe were fitted with a last row that only tumbled forward and had to be removed if big and bulky items were to be transported. And that proved to be a massive blight.

Now, with the all the seats folded, there is a nice flat floor. In the long wheelbase models, you could get a pretty decent game of shuffleboard going on back there.

The window on the aluminum lift gate will open independently and the rear wiper is now mounted on top, hidden under the spoiler.

Initial impressions are good when venturing out in these behemoths. My first drive was in a regular-wheelbase Yukon SLT 4WD ($63,950).

The chassis upgrades, extra sound insulation and acoustic windshield/front side windows make for a nicely hushed cabin. Yes, the faint quivers through the structure are what you’d except from an almost three-tonne body-on-frame SUV, but the 5.3-L V8 does a decent job of moving this rig, and the variable-assist electric steering is slack-free and accurate, if not particularly feelsome.

The standard suspension gets tweaked for better handling, but the real dynamic revelation is the trick Magnetic Ride Control — standard on the Suburban LTZ and Yukon Denali models.

The continuously variable damping system transforms the dynamics of these brutes. I spent an hour piloting the full-blown Yukon Denali XL 4WD ($76,530) over some pretty sinuous mountain roads and it proved to have the smoothest ride (even on its massive 22-inch wheels) yet barely leaned in the corners. From the wheel, I never would have guessed its arse-end was in another county.

Indeed, the Denali is the ultimate expression of this truck. The 420-hp 6.2-L V8 hauls hard and makes a glorious noise, the interior gets real wood and brushed aluminum trim, and standard noise cancellation technology makes the cabin even quieter.

It’s a champ on the highway, too.

In a nutshell, these 2015 brute-utes are better looking, more fuel-efficient, more comfortable, more functional and less-expensive than the old models.

Seems like GM’s lock on this segment is secure. 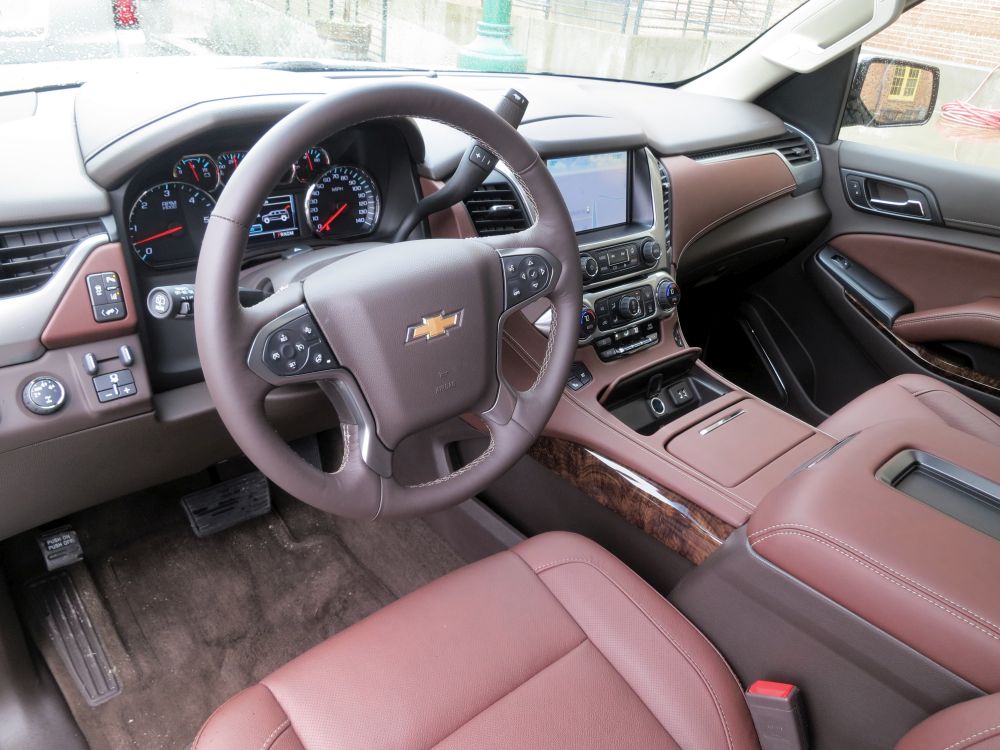 Transportation for freelance writer Peter Bleakney was provided by the manufacturer. Email: wheels@thestar.ca.