The upcoming Macan EV will be the first to use PPE, and we got a sneak preview.

Join the Conversation (0)
Porsche wants half of its vehicle sales to be electrified models by 2025, but it's doing it the hard way. No mild hybrids here, the term referring to a 48V motor that's not doing much more than letting the engine stay off at a stop. Porsche wants the real deal. Vehicles that are either plug-in hybrids or full EVS. And it wants more than 80 percent to be fully EV by 2023. This is the platform that will help the automaker accomplish this lofty goal.

Maybe more than for any other brand - at least any that sells at this volume - performance is key to the existence of Porsche. Buyers today largely see gas power as offering performance, and electric vehicles as offering a bit of a novelty that might have quick acceleration but not much else. That's of course doing EVs a severe disservice (see our stories on Porsche's Taycan), but a preconception the company needs to move past.

It will do that with a new platform. Called PPE, it has been developed with Audi as well as Porsche. The name means "Premium Platform Electric" and the company says this will let it sell high-performance electric models at scale and make money at the same time. We got our first look at it through augmented reality and a first look at the electric Macan at the Porsche Experience Center Franciacorta.

An all-electric version of the Porsche Macan will be the very first vehicle built on PPE, and Porsche is serious about it. Calling it "the sportiest model in the segment." Though this is, of course, still a very small segment. 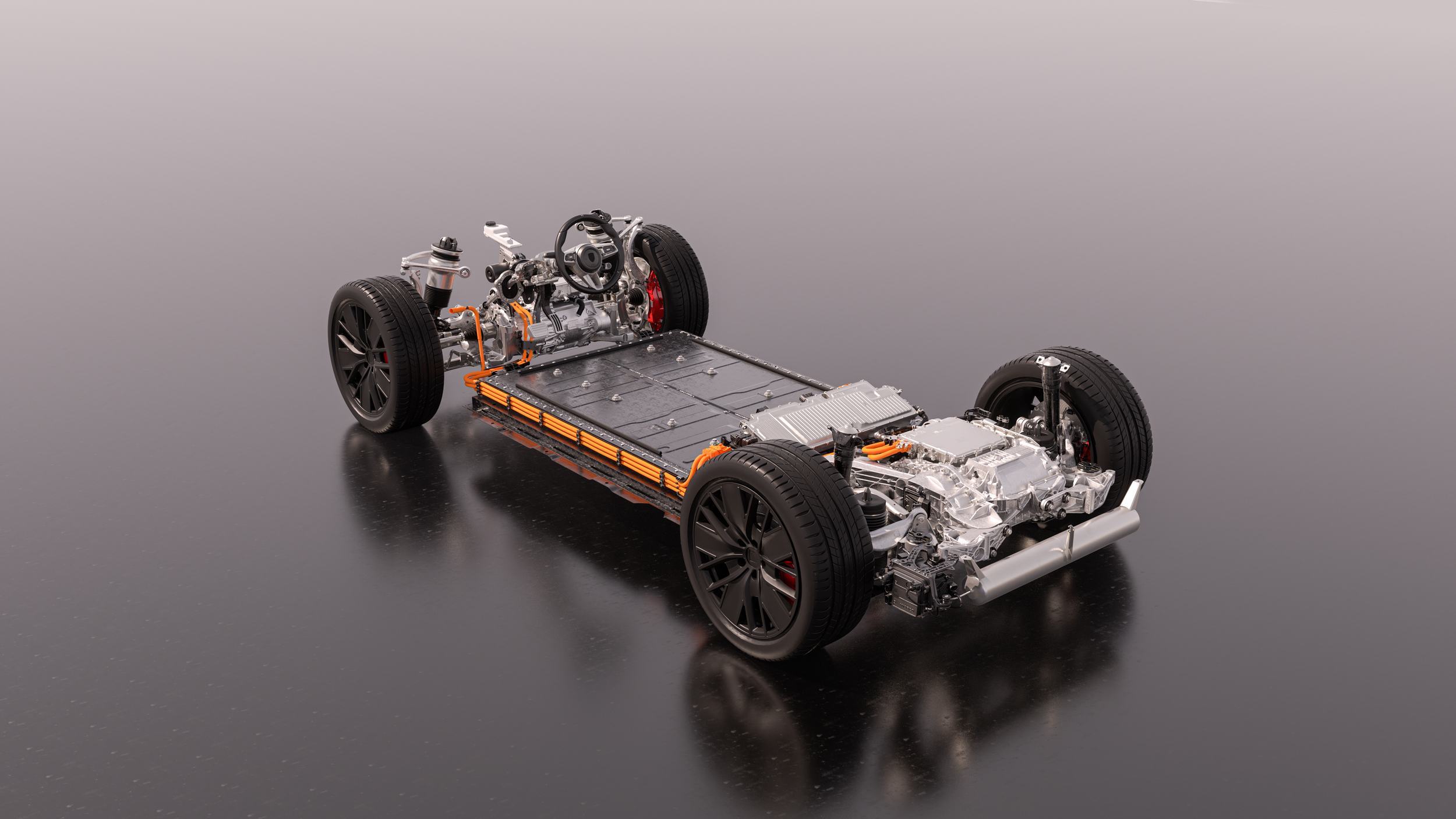 Like the Taycan, and most current premium EVs, PPE will use an 800v electric architecture. The point of more voltage is that it lets the automaker run less current, because power is equal to voltage times current. Less current means thinner and lighter wiring and faster charge times on top of making it easier to make more power.

All PPE vehicles will use a new permanently excited electric motor with Porsche's hairpin winding. The design offers more power and torque in a smaller size along with higher levels of efficiency.

Compared with the Taycan's motors, Porsche has revised the cooling jackets and the arrangements of the magnets (Porsche calls it double V lamination if you're an electric motor designer). The result is higher power density, so more power for a given size and weight. New silicon carbide semiconductors in the rear motor's pulse inverter reduce losses in the system and let the company's engineers use higher switching frequencies. Which is a long way of saying they can make a smaller and more efficient inverter. 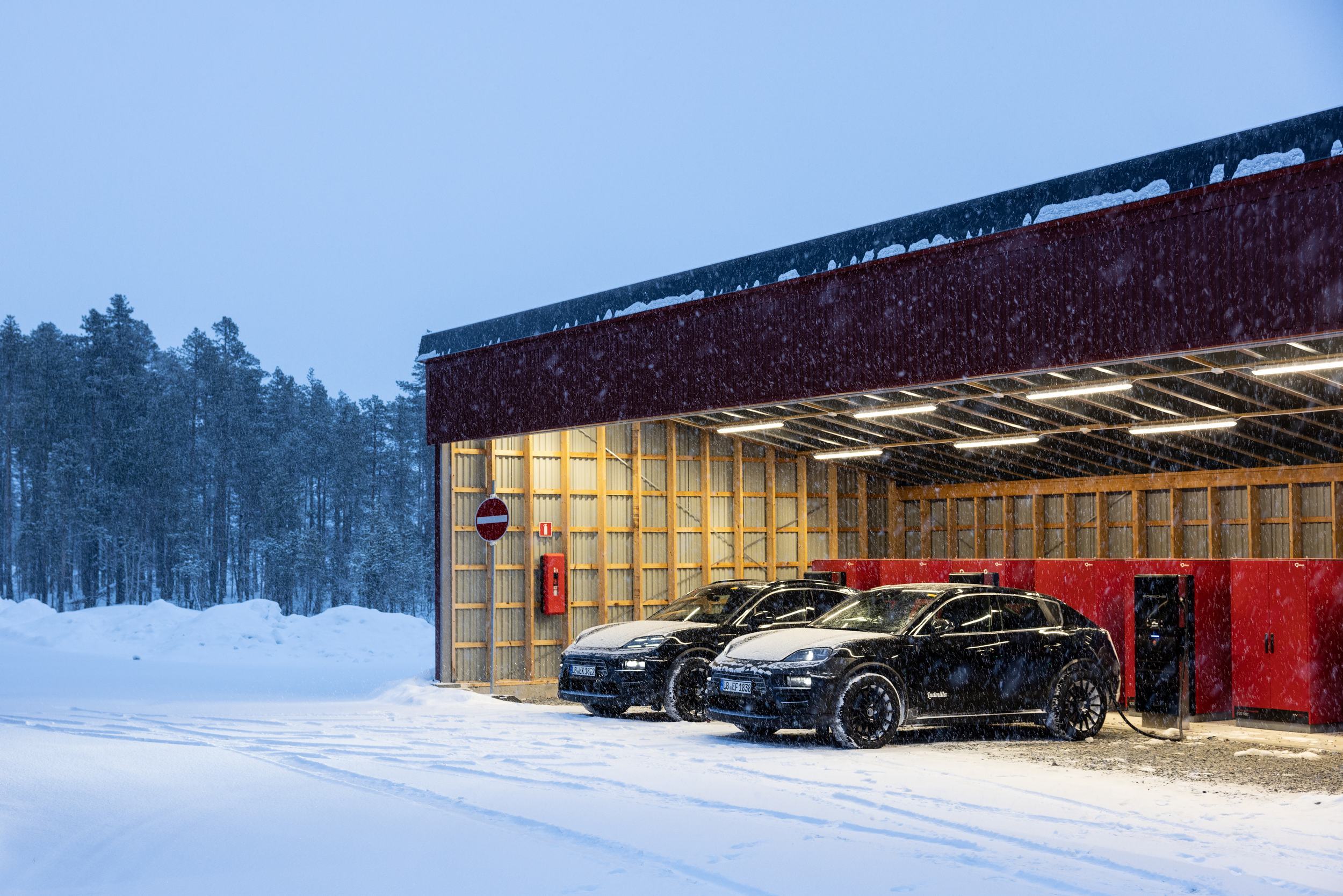 At launch, PPE's electrical system will allow 450 kW of power and a peak torque that delivers more than 1,000 Nm. Call it 604 hp and 738 lb-ft, well up on the 434 hp and 406 lb-ft of torque from the now weak-sounding Macan GTS and its 2.9L V6. Lower power output models will be offered, and even more power will come with time and the endless Porsche need for more variants along with another couple of years of development. With the PPE system that extra might even trickle down to first-year Macans through OTA updates.

A battery pack made up of 12 modules uses an 8:1:1 ratio of nickel to cobalt and manganese. Less cobalt is better for sustainability because it's the harder and more harmful of the battery metals and Porsche says its ratio helps energy density as well.

Lessons learned from the Taycan and its most recent charging update make that part of PPE better, too. The new Macan will be able to charge at more than 270 kW, giving it a 5-80 percent charge in under 25 minutes. Plug in at a 400V charge station and the battery's mechanics change. It will charge two banks of the battery in parallel maximizing 400V charge speeds.

A new integrated power box puts the onboard AC charger electronics, the DC/DC converter, and the high-voltage battery heater in the same box. It frees up enough space to give the Macan EV a bigger front trunk and boosts the vehicle's efficiency.

This is Porsche, so there's more to the plan than just better electronics. For the scalable PPE system, Porsche has built what it calls a "Performance rear body." A fancy marketing way to say that it has the motor put very far back in the subframe to give it a 52 percent rear weight bias. That extra weight in the back boosts traction and the Macan EV will get a wider stagger between front and rear tires to take advantage (and wheels up to 22-inches).

The new rear-end design lets Porsche add rear-wheel steering to the Macan EV, too, for more agility and stability. 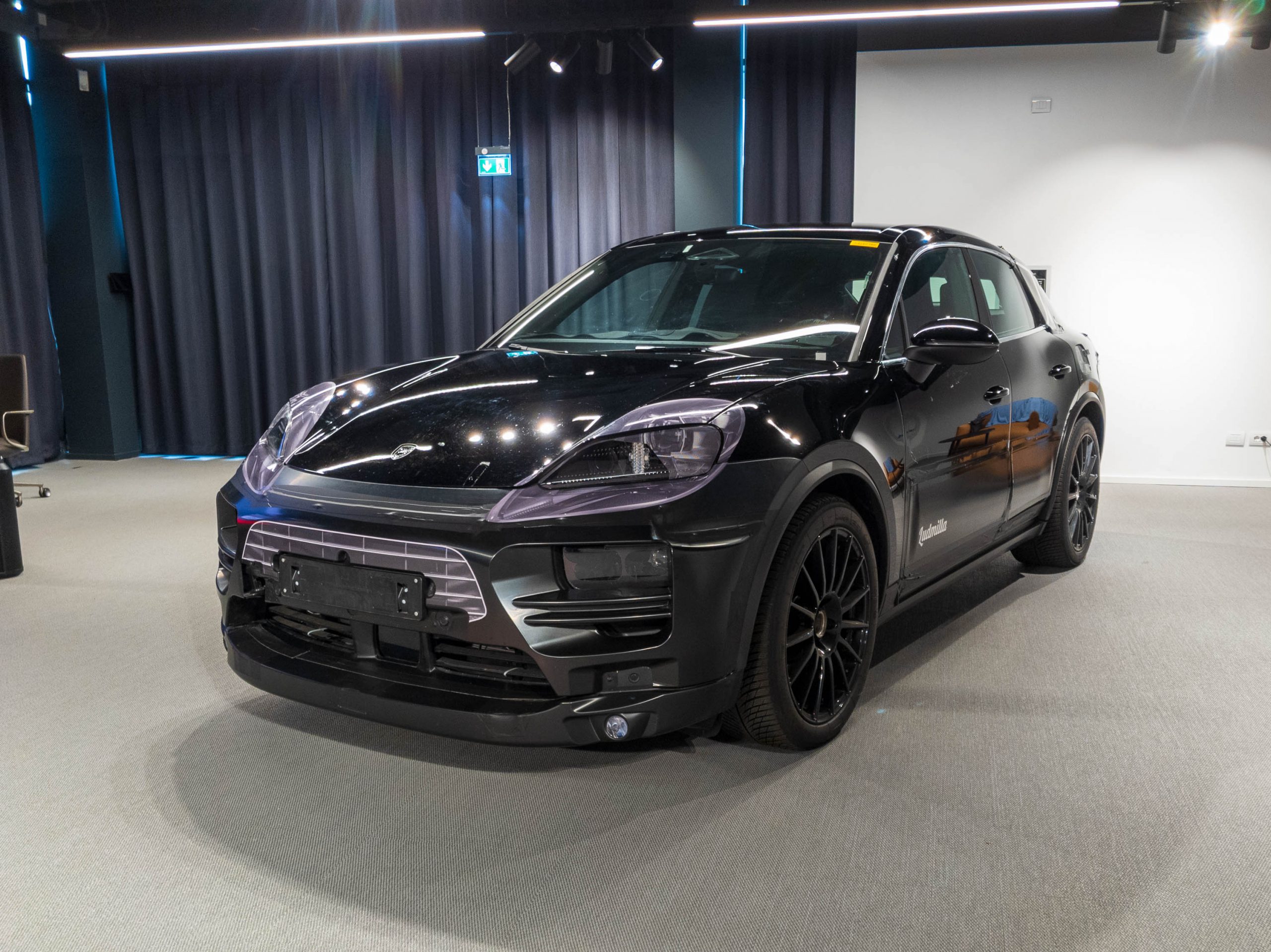 Now we're getting into the things that are specific to the Macan EV, or at least so far. Fortunately, Porsche brought one along, and while we couldn't drive it we did get to see the production bodywork. Make that production bodywork heavily disguised.

Porsche wasn't fooling us with the sticker headlights and fog light, that hilariously fake grille, and loads more quick add-on bits to make sure we can't give you fully accurate photos until the real reveal.

No, we don't have a full reveal date yet either, but we do know it will be on sale and starting deliveries in early 2024.

We can tell you it's going to look a lot like the current gas Macan, but Porsche isn't exactly known for drastic styling changes. See the 911 for proof.

The nose is slightly different thanks to not needing a conventional radiator grille. The headlights are much shorter, more like the Taycan's than the current Macan, and if you look closely there appears to be another headlight mounted in the bumper. Though those could be the actual fog lights. The taillights are highly disguised as well, but looking closely shows that they'll be in the same style as the Taycan and current 911. 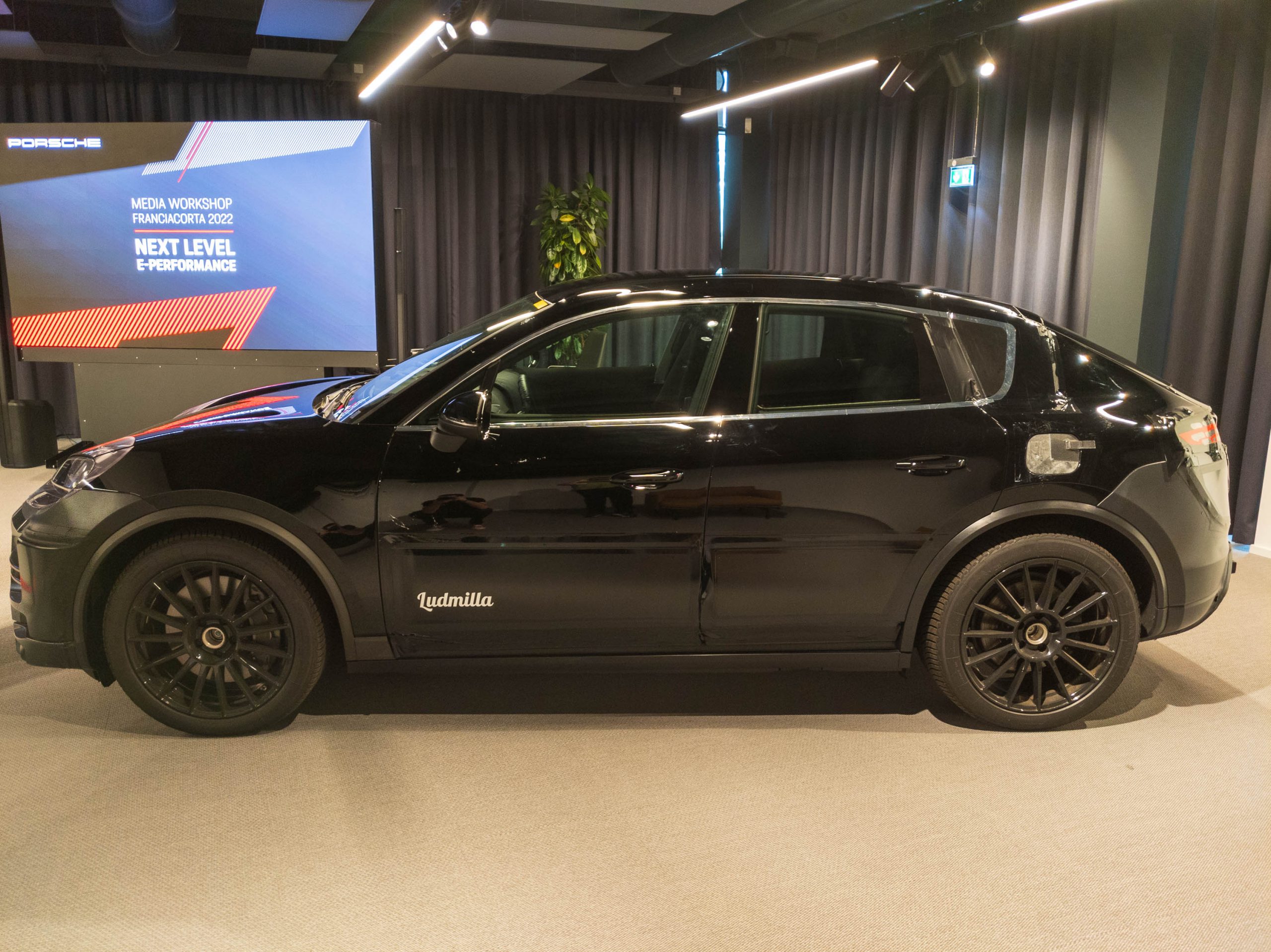 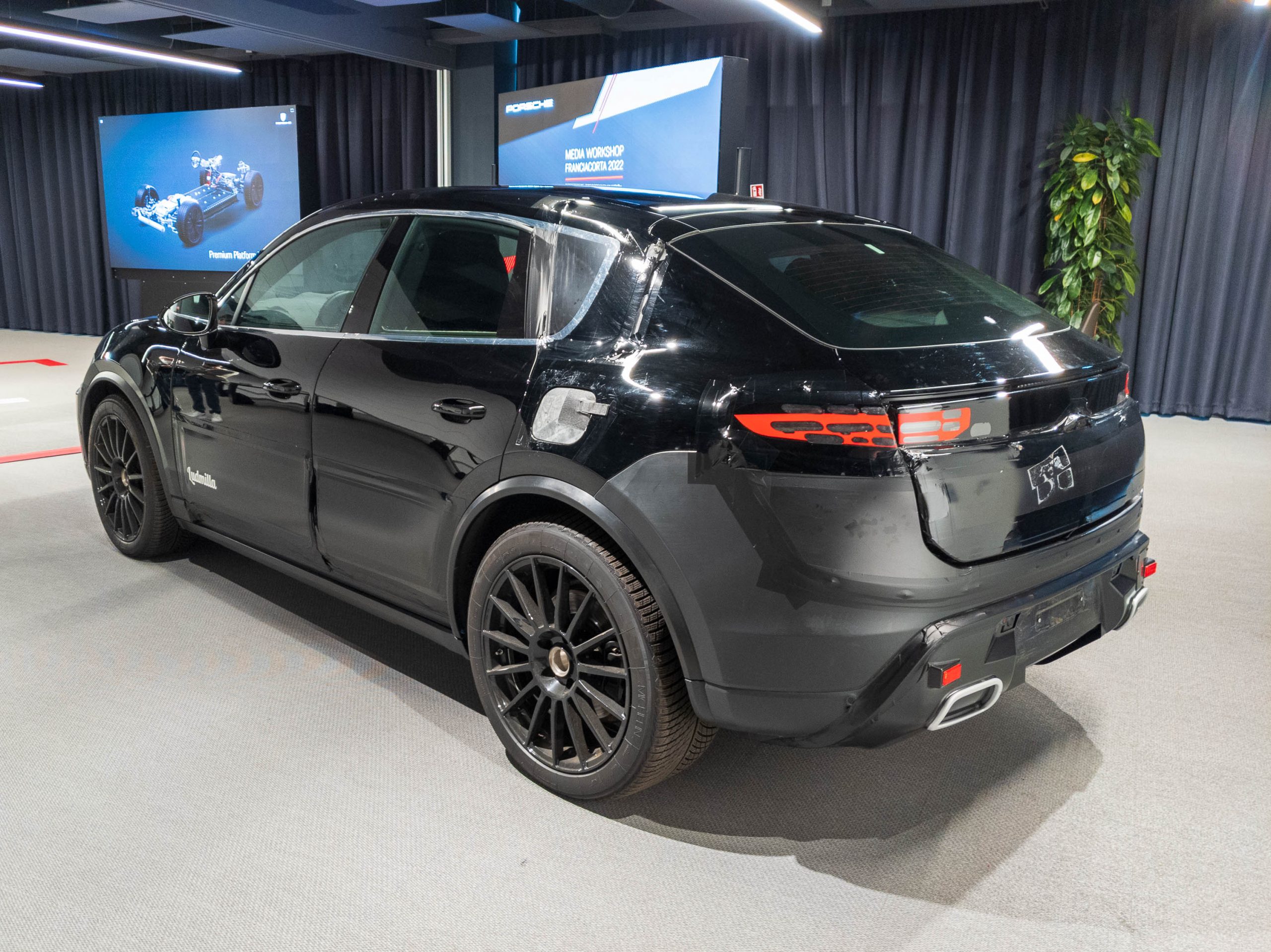 Along the side, the actual curve of the rear windows is somewhere in the middle of the fake ones you can see. Some poking showed us where the plastic turned to sheetmetal. Using the same poke method shows that the doors will have a much deeper scallop much lower than the current Macan. And at least this prototype didn't seem to have the lower door cladding of the current Macan. That name on the doors, Ludmilla in this case, is how Porsche identifies each of its hundreds of prototypes. They don't get a plate and a name is cooler (and more discreet) than a giant number on the door.

An electronic locking rear differential is part of the Macan EV package, for on-road, not off-road performance. Porsche has redesigned the front suspension and steering, looking for more precision and more steering feel thanks to a new in-house "boost controller." Lastly, Porsche Active Suspension Management gets two-valve shocks that can offer a wider spread between hard and soft and adjust rebound and compression independently. All of that should mean a better ride and better handling.

With the Taycan, Porsche showed that electric high performance (not just blistering acceleration) was not just possible, but should be expected. Now the lessons learned are being applied to a platform that will underpin its next generation of SUVs. We look forward to getting behind the wheel and pressing that left-side start button.