More carbon fibre and a radiator stolen from the race cars are the highlights of this RS.

Join the Conversation (0)
More power. A Le Mans-style radiator. Double the downforce of the car it replaces. And a factory-first Drag Reduction system. The new 911 GT3 RS is the sharpest yet, and Porsche has transformed the car into one that can spend all day at the track without blinking an LED headlight eye.

The heart of the latest 911 GT3 RS is its 4.0L flat-six engine. The standard GT3 already makes 503 hp from this engine at a screaming 8,400 rpm, but the engineers at Stuttgart didn't stop. New camshafts let the engine move a bit more air to help it make 518 hp.

The seven-speed PDK gearbox has a shorter final drive than the standard GT3 for quicker acceleration. It can hit 100 km/h in just 3.2 seconds and tops out at 296 km/h flat out. When you're flogging it around the track, new underbody air intakes help keep the transmission cool and content under extreme loads.

The standard brakes use six-piston fixed callipers in the front and four-piston units in the back. The pistons are 2mm larger in diameter than the GT3 for more clamping, and the discs are also 2 mm thicker to handle the heat. Porsche Ceramic Composite brakes with 410mm front rotors will be available, with both brake setups hiding behind centre-lock wheels.

Extensive use of carbon fibre to make parts like the doors, front fenders, roof, and front cover keep the car light. The GT3 RS is just 1,450 kg, says Porsche, 15 kg over the standard GT3 that makes do with only its front hood made from the composite.

So where does the extra weight come from? It could be the extensive aero tweaks Porsche has made. 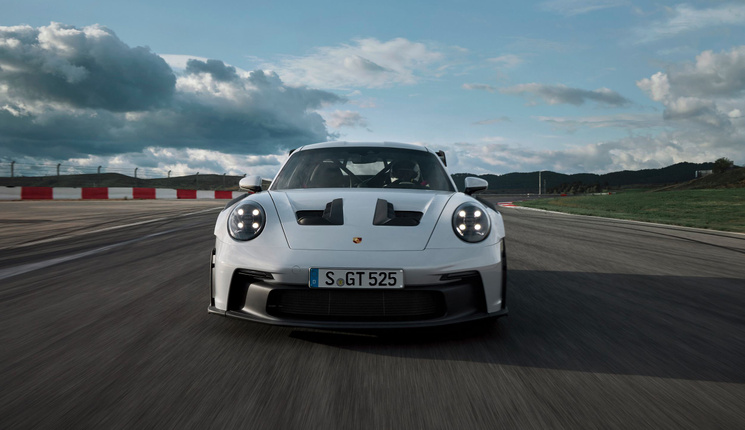 We'll start the aero changes with the new radiator. The standard GT3 has three radiators in the nose, a layout Porsche has used for years. For the RS, the side rads are gone and there is a single very large center radiator. It fills up what is usually a luggage space, but the new system lets Porsche make other serious steps to affect the car's aerodynamics.

There are continuously adjustable wing elements in the nose, combined with more on the two-piece rear wing. There's no front spoiler, instead, Porsche has added a front splitter and sideblades. The wheel arches have louvred vents and inlets behind the wheels while roof-mount fins lower air intake temperatures. 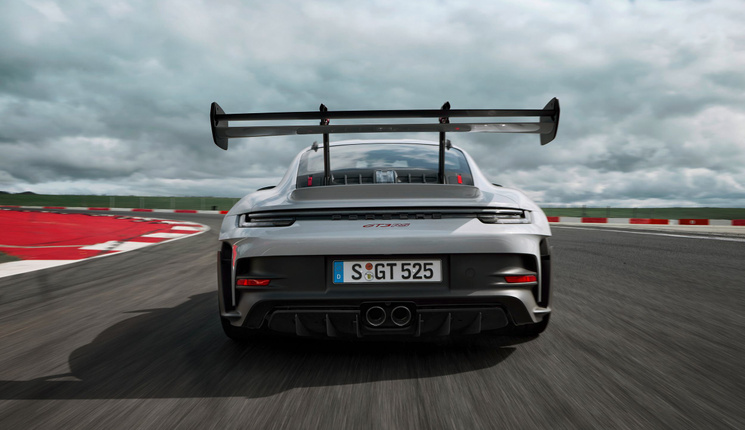 The new rear wing has F1-like DRS to flatten it out with the push of a button for higher top speed. Smash the brakes and it turns into an air brake. The wing itself is much larger than the GT3's, with swan-neck supports, a fixed main element, and the adjustable upper element.

Even the suspension has been modified for the sake of aero. It has wishbones with a teardrop shape to smooth flow, and that feature alone adds 40 kg of downforce. 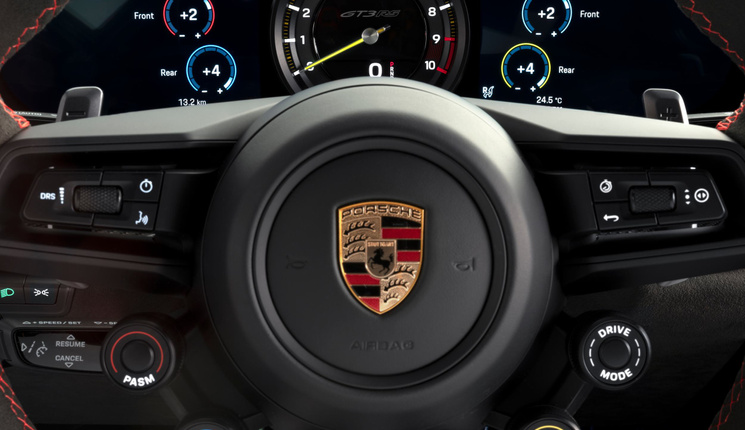 Normal, Sport, and Track modes adjust rebound and compression damping. Or the driver can tweak the suspension independently through multiple stages. The driver can even control the rear diff on the move with a control on the steering wheel. That's one of four rotary dials on the wheel (plus a DRS button) giving the driver motorsport-style adjustment.

Porsche is offering a Weissach package on the GT3 RS that leaves the front lid, roof, rear wing, and mirrors in an exposed carbon-weave finish. It also adds CFRP anti-roll bars front and rear and motorsport magnet-derived paddle shifts that Porsche says are more dynamic.

You can order your 911 GT3 RS now, and the cars should start arriving in Canada in the spring. Pricing starts from $248,000.