The 911 Turbo S uses advanced aero to go with its ballistic power.

Join the Conversation (0)
Porsche's new 911 Turbo S is loaded with active aerodynamics to help the quickest of the new 911s adapt to different driving situations and improve dynamics and fuel consumption. Now they've detailed some of the improvements made to the real Turbo turbo 911. Meanwhile, Porsche Canada has just announced that it will be making its roadside assistance services available to front-line hospital workers in Ontario, regardless of what make of car they drive.

"No other sports car reacts to different situations with such aerodynamic flexibility as the new 911 Turbo S. We aerodynamic engineers are normally faced with a dilemma: a low drag coefficient is desirable for maximum speed and low consumption, while a high downforce is advantageous for driving dynamics. However, the two characteristics contradict each other,” explains Dr Thomas Wiegand, Head of Aerodynamics Development at Porsche. “PAA resolves the conflicts between these different aerodynamic goals."

We'll start at the nose with active cooling air flaps, a new feature for the new 911 Turbo. They fill the right and left side air intakes in the front bumper of the new car. Both can open and close to trade airflow through the radiators for less air moving through the car. From 70 km/h, they're closed as much as possible, to reduce aero drag, and from 150 km/h they begin to open to balance the aerodynamic forces with the rear. They're also open in Sport, Sport Plus, and Wet modes for maximum downforce.

The front spoiler gets a larger aerodynamic surface area than before, letting it have a greater effect on the vehicle's balance. The pneumatically-operated spoiler can extend and retract faster than before, and the flexible surface lets Porsche operate the centre independently from the corners.

At the tail, a new rear wing is 440g lighter than before, but has eight percent more effective area. It's a foam core with forged inserts. On top are two layers of carbon fibre, and there's a single layer of fibreglass on the bottom. The wing can extend and tilt based on speed and driving mode. 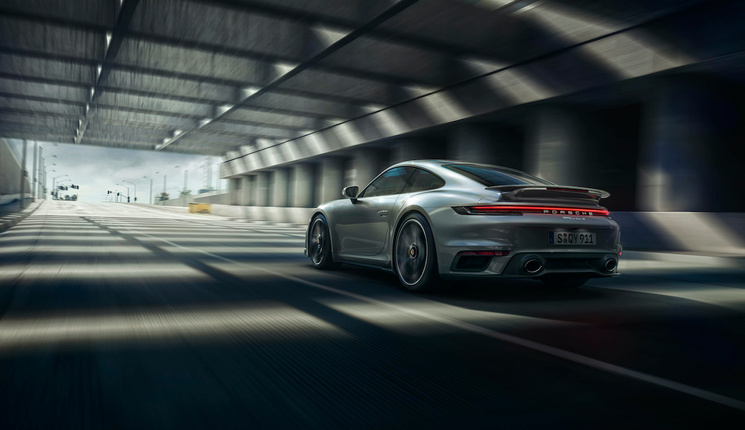 It means some changes to the drive modes as well, starting with the Eco mode you probably won't ever use. It lets the wing stay retracted over a larger range of speeds, allowing for minimum drag. Performance II reduces the angle of the wing above 260 km/h to reduce drag and decrease the load on the rear axle for optimal race track handling. Lastly, a new Wet mode adds to the low-grip throttle and transmission settings of lesser 911s by extending the wing to move the balance to the rear and add stability.

This flexibility lets Porsche add an Airbrake mode that extends the wing and nose for maximum downforce during full braking at high speeds. It adds stability and shortens braking distances, Porsche says. The trick new active aero takes into account cabrio vs hardtop and even if the sunroof is open.

While the 911 Turbo S isn't here yet, Porsche's latest announcement is effective right now. For the 235,000 front-line hospital workers in Ontario, Porsche Roadside Assistance Services are being made available. That means these workers can call to get towing, jump-starts, flat-tire assistance, and emergency fuel delivery, regardless of what brand they drive, until May 31st.

"The world is experiencing one of the worst public health crises in its history and we are happy to offer a gesture to keep the valuable frontline workers moving as safely as possible,” said Marc Ouayoun, President & CEO, Porsche Cars Canada. “We recognize their tremendous contributions and feel that assisting in transportation issues during this time while they work towards the safety and wellbeing of Ontarians is our way to contribute to the greater good."