It's an engine as much about character as power, able to rev to 7,800 rpm.

Porsche’s mid-engine sports cars, the 718 Boxster and Cayman, are about to get a little more six appeal. A new GTS 4.0 model offers a flat-six like the GT4, but in a package that’s a little less extreme, and likely a little less pricey.

The 4.0L flat-six that Porsche is putting in the GTS 4.0 models is “closely related” to the version in the GT4. But rather than the 414 hp it makes in that weekend racer, in the GTS Boxster and Cayman it makes 394 hp and 309 lb-ft of torque. This is still a naturally aspirated engine, unlike the turbo sixes in the new 911s or the turbo-fours in lower-spec 718s. Or the 365 hp 2.5L engine that was in the old GTS model it’s replacing.

Porsche says it’s enough power to hit 100 km/h in 4.5 seconds, with a top speed of 293 km/h. Surprisingly, that’s only a tenth quicker than the manual transmission 350 hp 718 S models, and slower than the fastest PDK with Sport Chrono models. But since it offers only the manual box, the GTS is about the driving experience as much as it is all-out speed.

It’s an engine as much about character as power, able to rev to 7,800 rpm. Porsche says it will put out “a particularly rich six-cylinder boxer engine sound,” aided by a sports exhaust fitted as standard. It’s the twin-tailpipe design from the GT4, which will spout from a GTS-specific black rear lower fascia. It also has adaptive cylinder control, a fuel-saving measure that shuts off one of the two cylinder banks at low engine loads. 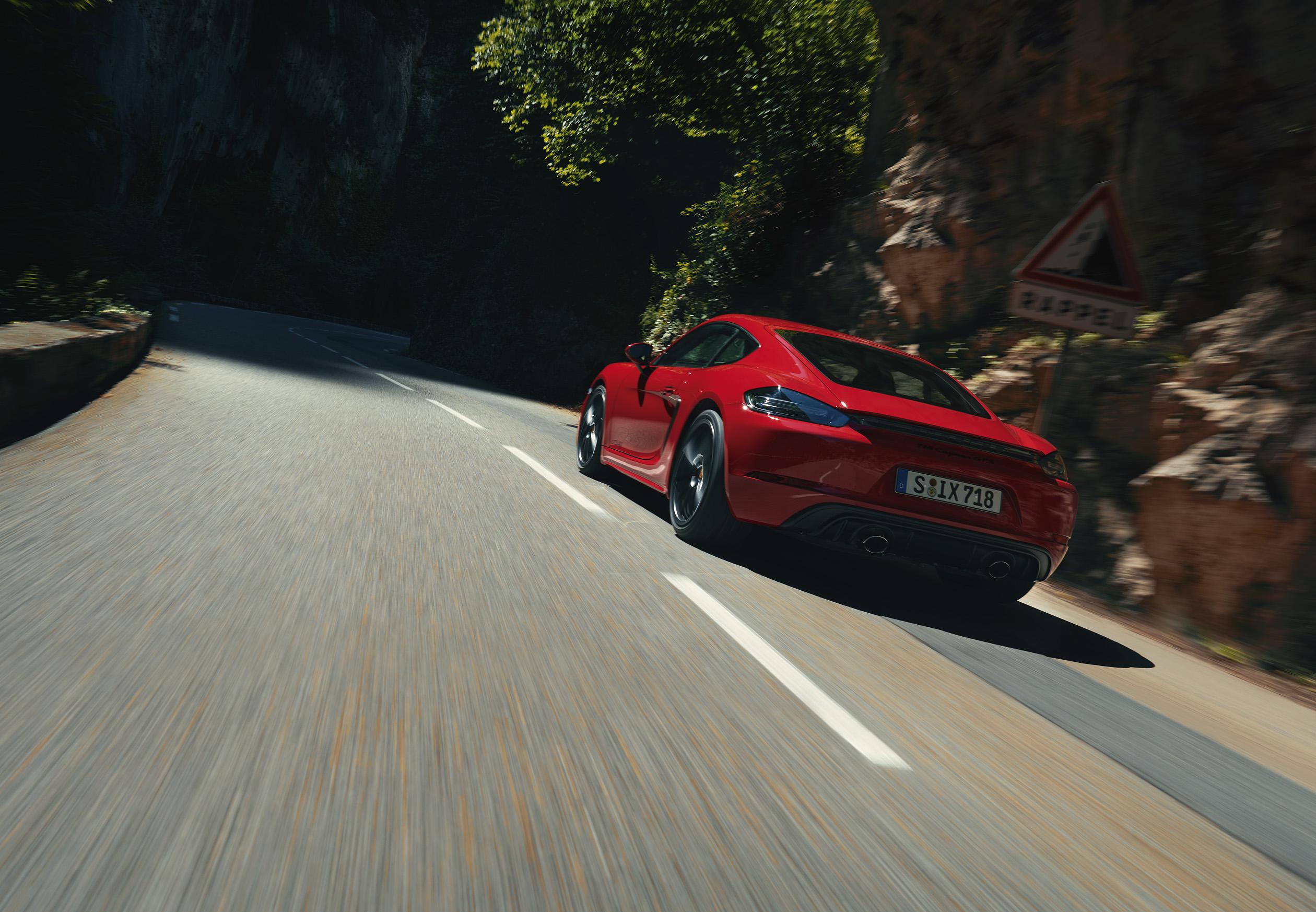 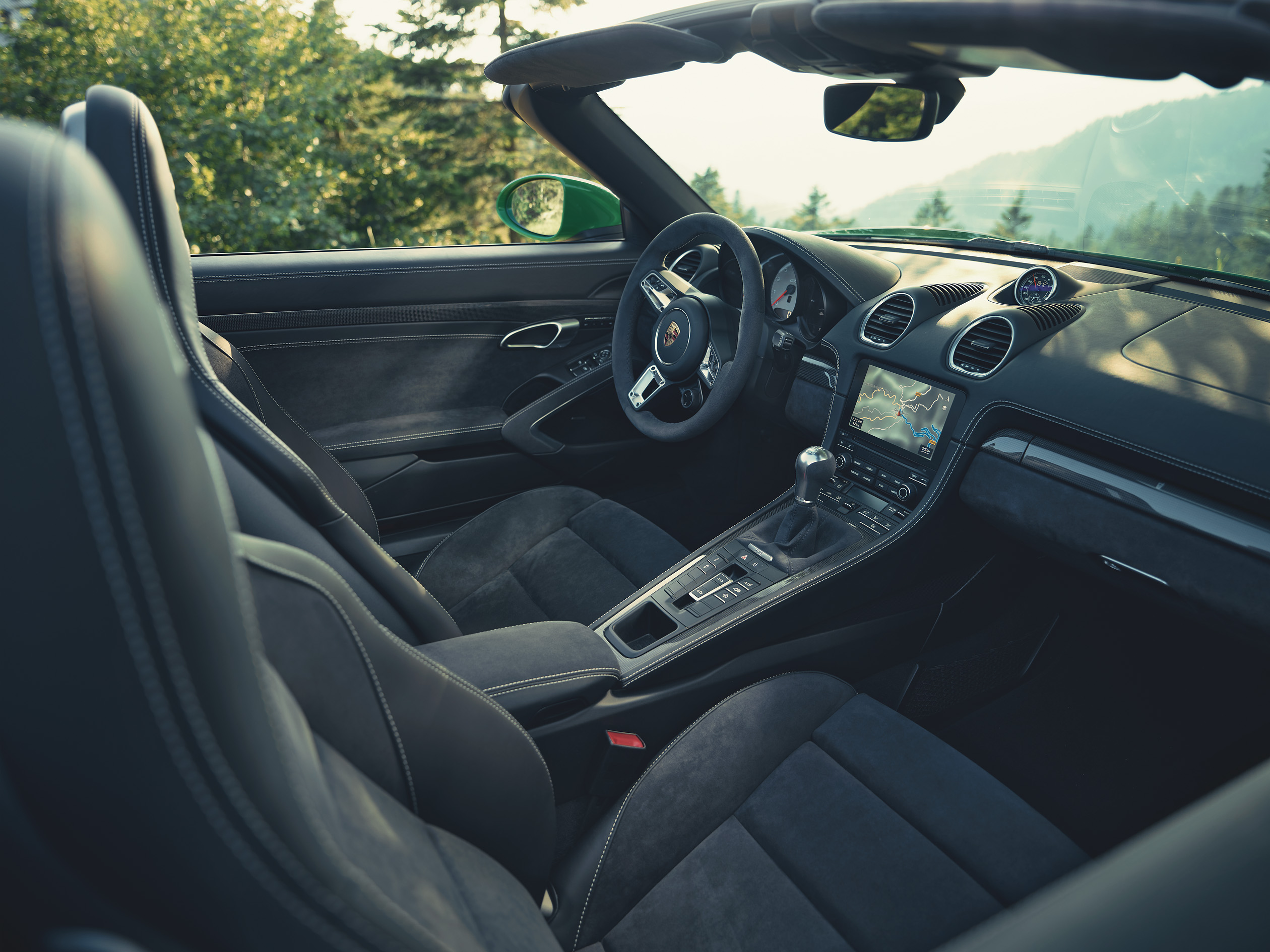 The GTS 4.0 cars get a revised Porsche Active Suspension Management system, lowering the cars 20 mm compared with standard 718 Boxster and Cayman cars. Porsche Torque Vectoring comes standard, routing power to the left or right rear wheel as needed, along with a mechanical rear differential for maximum cornering and acceleration grip. 20-inch alloys are fitted to cover brakes 20 mm larger in diameter than the last GTS. The 350 mm front rotors get six-piston callipers, finished in red, and Porsche’s ceramic composite brakes are on the options list.

A Sport Chrono Package is standard on the GTS 4.0s, offering a newly upgraded Porsche Track Precision telemetry app, as well as active drivetrain mounts. The automaker says that the suspension changes give it “an exciting driving experience
with ride comfort suitable for everyday use.”

Like Porsche’s other GTS models, black trim and accents are found throughout, including the air intake, front fascia, rear fascia, and tinted headlights. Inside is black Alcantara covering most surfaces including the Sport Seats Plus, steering wheel, centre console, armrests, and A-pillars. An option pack adds contrast stitching to the entire interior in red or chalk and also turns the tach and seat belts the same colour. Other trim is finished in carbon fibre, with alternate finishes available.