As the Queen celebrates 70 years on the throne, we look at the long connection between the monarch and Land Rover

Join the Conversation (0)
The four-wheel drive, off-road Land Rover was once advertised as the “go anywhere” option “for the farmer, the countryman and general industrial use.”

While that description doesn’t exactly conjure up visions of majesty, Queen Elizabeth II has a long connection to these vehicles. In fact, it has been a favorite of the Royal Family since her father, King George VI, was presented with the 100th Land Rover to come off the assembly line in 1948.

“I don't know how many people know that all the Windsors are car fanatics,” said Giles Chapman, author of “The Jaguar Century.” Jaguar Land Rover has owned the car manufacturer since 2008, and produces its family of vehicles, which includes the Range Rover line.

Seventy years ago, just before her coronation on Feb. 6, 1952, the Queen received her first Land Rover and has since amassed a fleet of more than 30 for use at ceremonial events and on her private estates. Her eldest granddaughter, Zara Tindall, is the brand’s official ambassador. Even Prince Phillip was a fan, and, after his death in April 2021, had his coffin transported in a Land Rover Defender TD5 130. The customized vehicle was painted in a dark, military bronze green.

“Prince Philip pimped out a Land Rover as his hearse for his funeral, which is odd, let’s be honest,” said Daily Telegraph columnist Stephen Armstrong. “The idea that you would choose to make your own hearse out of a Land Rover suggests you have a particularly intense relationship with that kind of vehicle.”

In part, that relationship stems from the practicality the Land Rover offers. “The Royal Family are sort of country folk,” said Armstrong. “They own, essentially, the United Kingdom. Almost every single piece of land is owned by the Queen, and she's got to get about it somehow. They don’t spend all their time with the crowns. They do spend a lot of time with their farm managers, so it's a very useful vehicle.”

“When the Land Rover was launched in 1948, there was literally nothing else like it,” said Chapman. “The fact that the royal household would acquire a couple for their several country estates in the U.K. is not a surprise. Land Rover first got a warrant from the royal household in 1951. That’s a little badge of honor to say that you supply the Royal Family, and it can be on a bottle of HP Sauce or a pair of wellington boots or a car.” 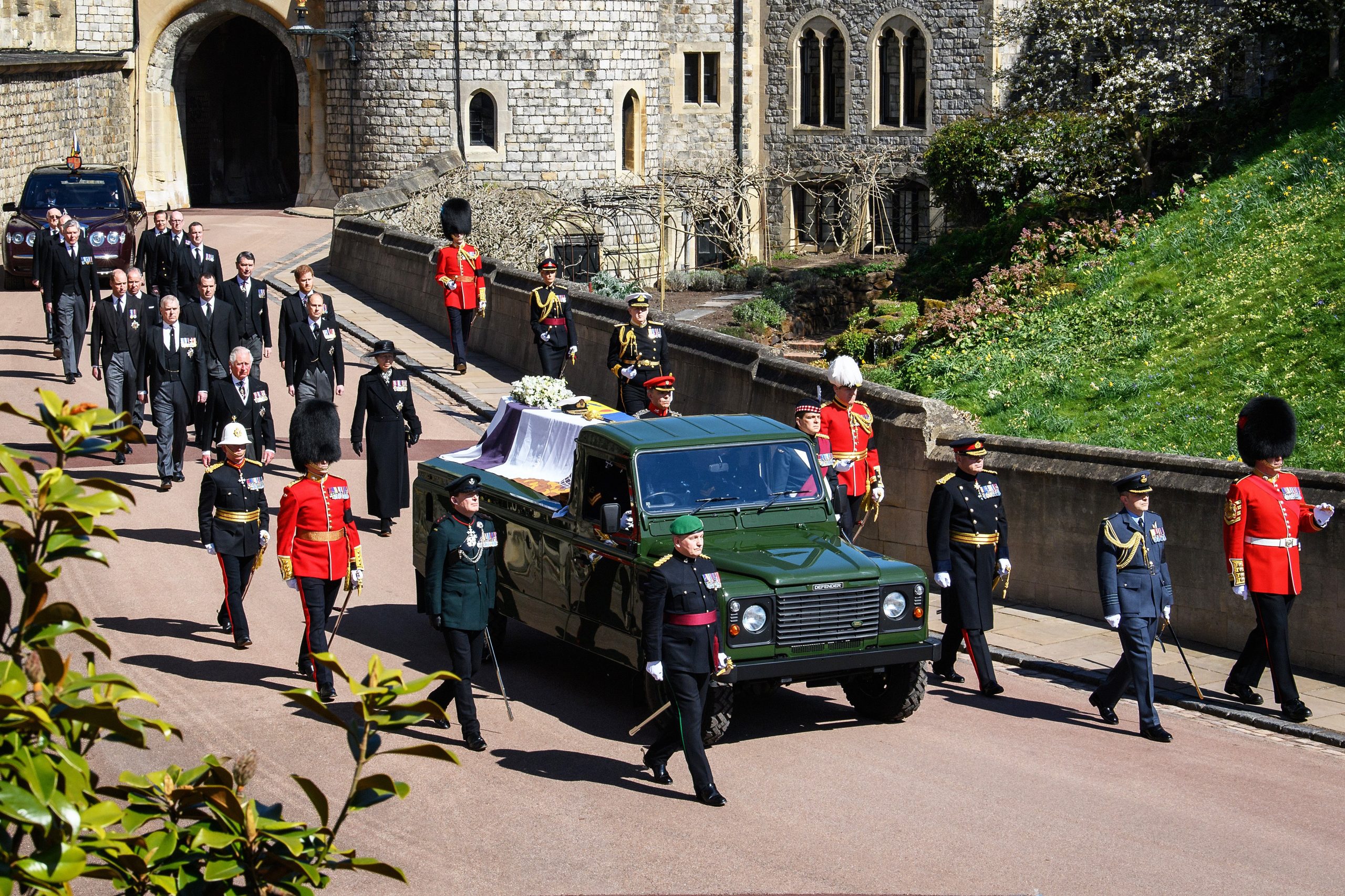 WINDSOR, ENGLAND - APRIL 17: Princess Anne, Princess Royal, Prince Charles, Prince of Wales, Prince Andrew, Duke of York, Prince Edward, Earl of Wessex, Prince William, Duke of Cambridge, Peter Phillips, Prince Harry, Duke of Sussex, Earl of Snowdon David Armstrong-Jones and Vice-Admiral Sir Timothy Laurence follow Prince Philip, Duke of Edinburgh's coffin during the Ceremonial Procession during the funeral of Prince Philip, Duke of Edinburgh at Windsor Castle on April 17, 2021 in Windsor, England. Prince Philip of Greece and Denmark was born 10 June 1921, in Greece. He served in the British Royal Navy and fought in WWII. He married the then Princess Elizabeth on 20 November 1947 and was created Duke of Edinburgh, Earl of Merioneth, and Baron Greenwich by King VI. He served as Prince Consort to Queen Elizabeth II until his death on April 9 2021, months short of his 100th birthday. His funeral takes place today at Windsor Castle with only 30 guests invited due to Coronavirus pandemic restrictions. (Photo by Leon Neal/WPA Pool/Getty Images )[/caption]

Today the Land Rover brand has gone upmarket, but it debuted as a utilitarian, four-wheel-drive off-road vehicle.

“A sort of hybrid between a pickup truck and tractor,” said Chapman. That design was not only practical, but also made sense for the Royal Family from a public relations standpoint in the years following the Second World War.

“Very, very left-wing movements in the country swept the Labour Party to power on a very radical democratic socialist agenda,” said Armstrong about the party’s landslide win in the 1945 general election. “The idea that you would have a royal family that rubbed their wealth into the British people's face in the 1950s and 1960s would not have gone down well.”

The modest vehicle also appealed to the aristocratic class’s long held way of thinking. “There used to be a slur that the aristocrats used to use to talk about someone who was lower class by saying, ‘Well, they bought all their own furniture.’ (It) is an indication of how (much they liked) hard wearing, long-lasting sorts of clothing and vehicles,” said Armstrong.

“If you look at the British labels associated with aristocracy, the shoes and clothing, they are all the kinds of things that just don't fall apart. Land Rover fits very much into that. It is starting to get a bit overly fancy as it appeals more and more to the West London set, but it was, essentially, part of the hard-wearing tradition of the aristocratic and Royal family approach to the land and approach to life.”

There may be another reason the Queen likes the vehicles. Despite being the only person in Britain who doesn’t need a driver’s licence, Queen Elizabeth did have a licence while she was still a princess. She also trained as a driver and mechanic during the Second World War with the women’s branch of the British Army, called the Auxiliary Territorial Service.

“She drove ambulances as part of the war effort,” said Chapman. “She was also able to open the bonnet of a vehicle, open her toolkit and do repairs. So, she’s a surprisingly practical person. I think if you or I were to drive a Land Rover from the 1950s or 1960s now, we’d find it heavy, uncomfortable and bouncy. The opposite of a sophisticated modern car. I think she’s grown up with vehicles like that. So, if there are any shortcomings in in the sort of ancientness of the Land Rover design, I don't think she minds at all.”

Chapman said that a sturdy Land Rover, “Seems to sum up Queen Elizabeth II. It’s very capable. It’s quite sophisticated, but it’s also got a sort of austerity about it.”