Join the Conversation (0)
If you are a gearhead who watches television, depending on your age, chances are pretty good that you have watched a show called Dream Car Garage or more recently, one called Legendary Motorcar. What you may not know is that while these top rated shows are filmed with the American market in mind, they are actually filmed right here in southern Ontario.

Show presenter Peter Klutt is more than just a talking head though. He’s a real deal car guy whose passion for cars and the car business came at an early age. Like many car enthusiasts, Klutt’s passion was ignited by a sibling.

“My Dad was a welder, so we had equipment at home. My old man taught me how to weld and do bodywork in the driveway. I painted it and sold it and made a bunch of dough.” 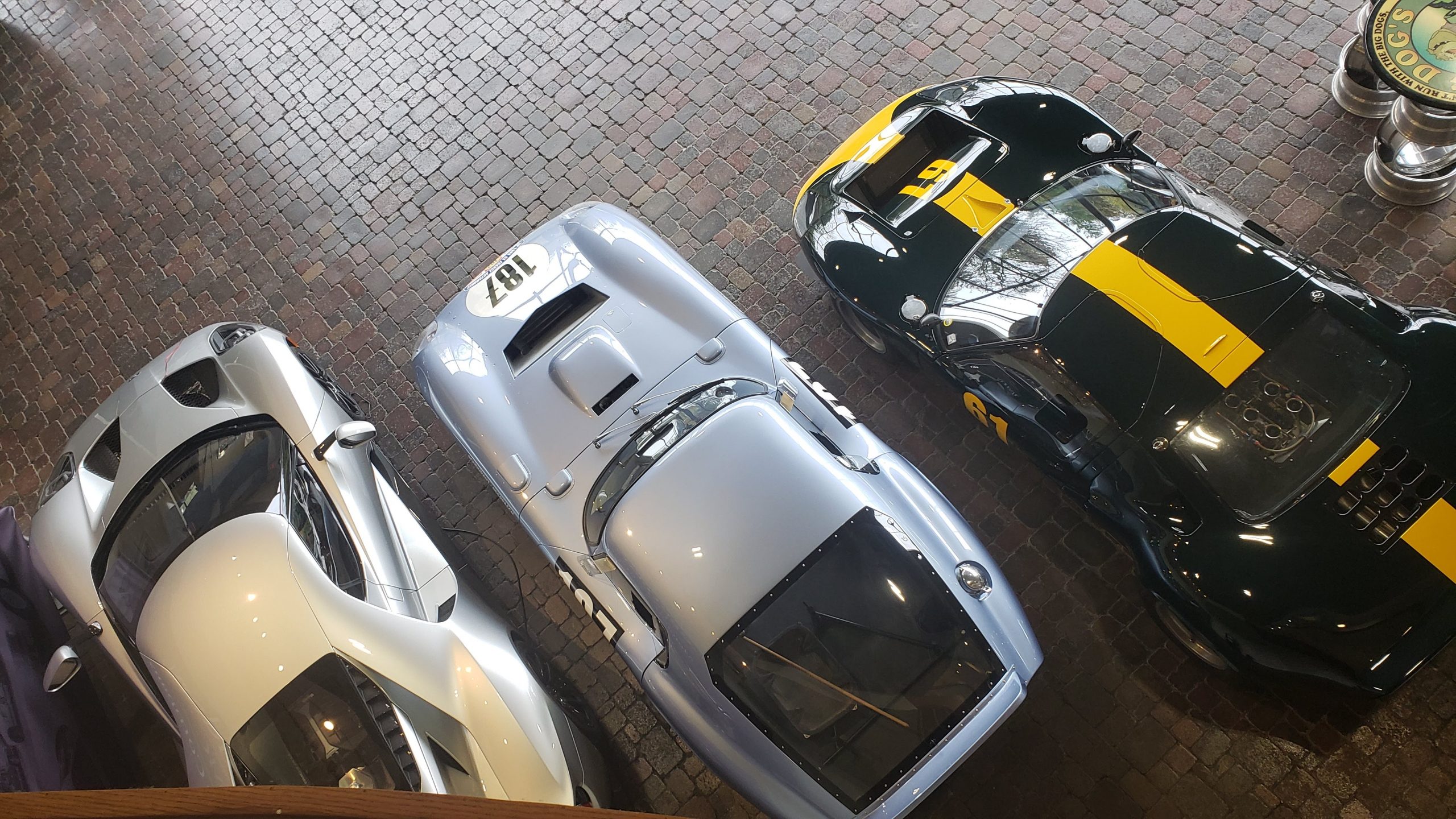 Flipping that pony car, which he never drove (legally at least) laid the groundwork for a budding business.

“It was better than delivering newspapers. I thought, geez, this is great, so I bought another car and then another car. I wanted something to drive, but it was the fact that I made money on that car before I was even 16.”

Fast forward a few decades and that budding business, has grown into the Legendary Motorcar Company, which is known around the world for buying, selling, and restoring some of the most special cars ever made. The company is a true family business, with wife Vicki and sons Gary & Ryan all playing important roles alongside a loyal team of employees.

As the business has evolved over the years, so has Klutt’s vision for the future, including not only product mix, but the transition of staff and the digital world. 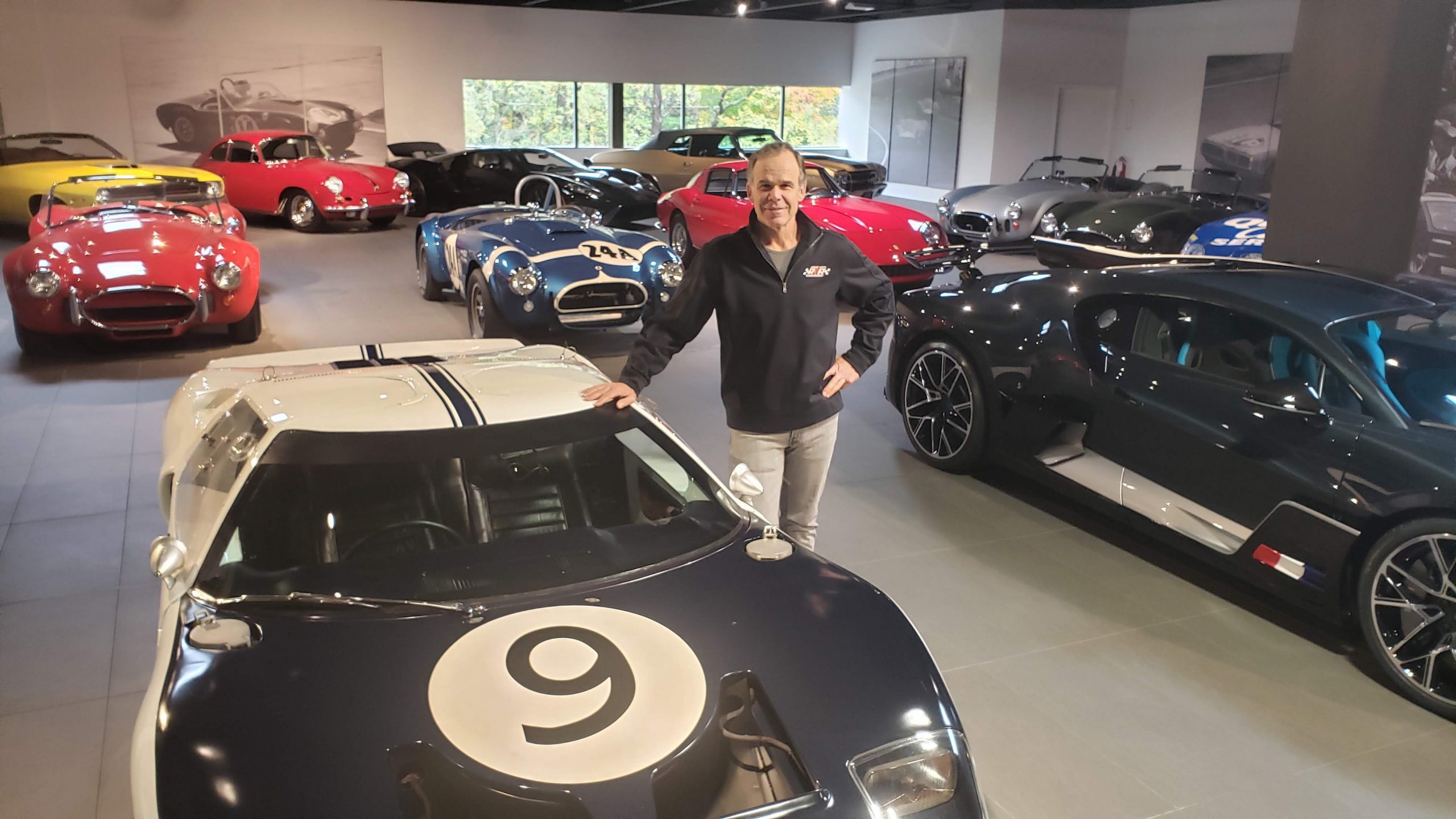 “It’s a family business for sure,” says Klutt, “but there are 20 other people who are involved and I look at it as sort of a bigger family than just my immediate family. I think it’s nice as I approach 60, people say, this is nice, this is going to carry on. I mean, it’s not like I am ever going to retire anyway, but I think it changes the dynamics.

“We’re trying to have a good mix of experience and young people with new ideas. I’ve got a lot of guys who’ve been with me for some 35 years. My first employee just retired. They’re not going to be around forever, so that knowledge really needs to be passed down. Now we’re looking at getting some guys in their Forties and guys in their Twenties and get that knowledge passed down. I think that is really important, because I think a lot of that is going to get lost.

“The 15 year old kid, it’s not long before he’s a 25 year old. If he’s sucking up all of that knowledge for 10 years, it is shocking how sharp those guys are at pretty young ages. Then you combine the skill sets they’ve been learning since they were kids, with computers and the internet and it becomes a pretty cool combination. 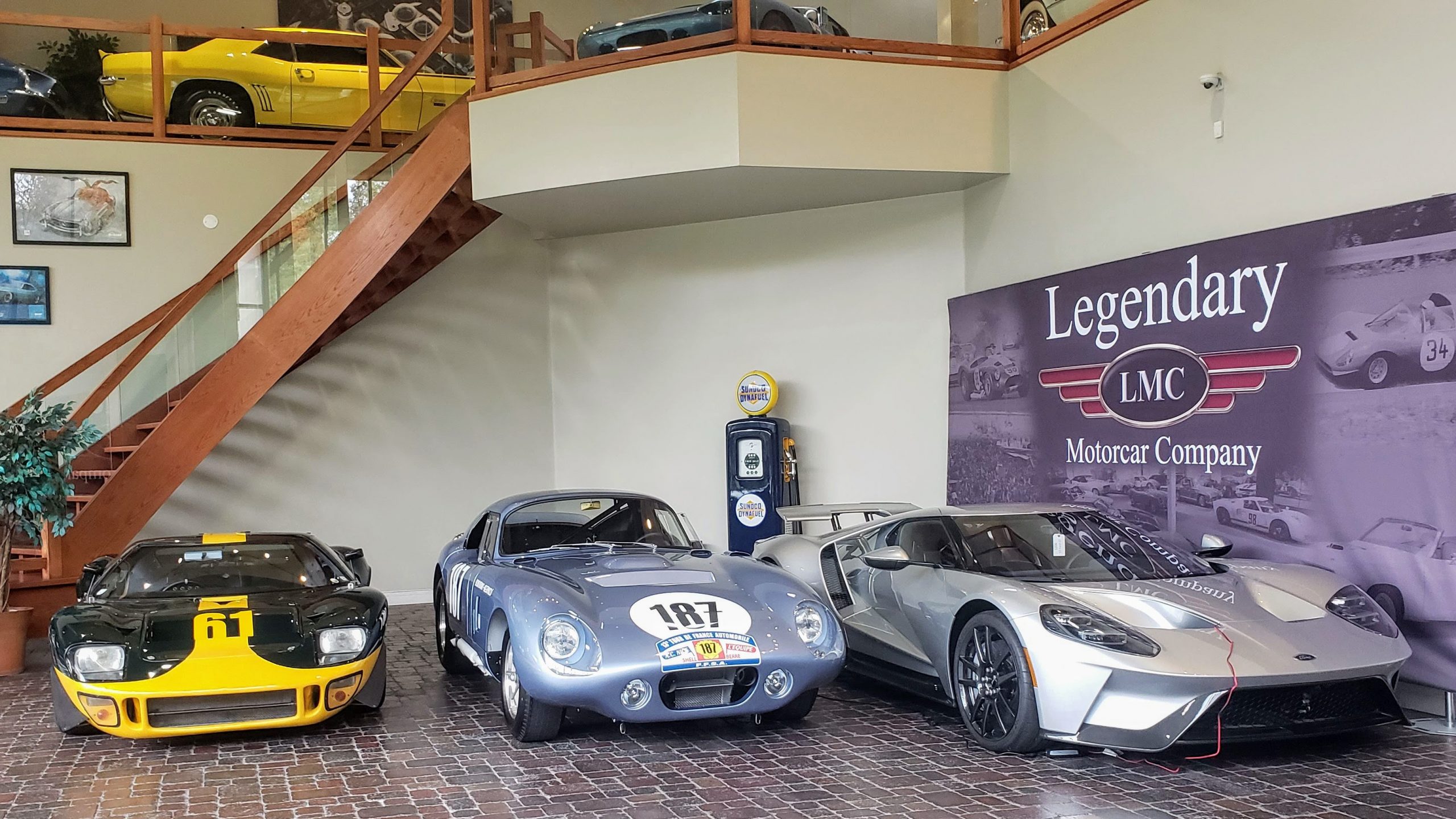 “From my own boys point of view, it’s great that they have an interest in the cars, in racing and are genuinely passionate about it.”

Those who have watched the shows or pay attention to local motorsports know that Peter and both boys are avid racers, but that wasn’t always the case.

Klutt says he didn’t become involved in racing until he was 30. In fact, he had never been to a race track until he went to a Shelby convention at Watkins Glen. “A guy named Michael Douglas, who owned Douglas Lincoln Mercury up in Barrie, was there with a ‘66 Shelby that he was racing. Mike said, “Jump in the passenger seat and I’ll take you for a rip around the track.”” “It was a full on vintage race car and I was just hooked, says Klutt. “I came home and went to the Bridgestone school at Shannonville and got my license.

“At that time in vintage racing, you had to start with a real Shelby, so I bought a Hertz car. Good car with an original engine. I gutted a good, virgin car and went racing. My first race was at Mosport, in a ‘66 Shelby…..in the rain”.

Racing has become integral to the Legendary brand. I asked if it is just a hobby or is it a marketing tool or maybe even a bit of both?

“Both, but if you look out there (motions to the room behind us) A huge percentage of the big cars we sell, look at the Ken Miles Cobra, the prototype GT40, the group 2 car, the 59 Corvette downstairs, the Ferrari 212 export that ran Le Mans in 51 and finished seventh, almost all of our big special cars, the comp Cobras [are race cars]. 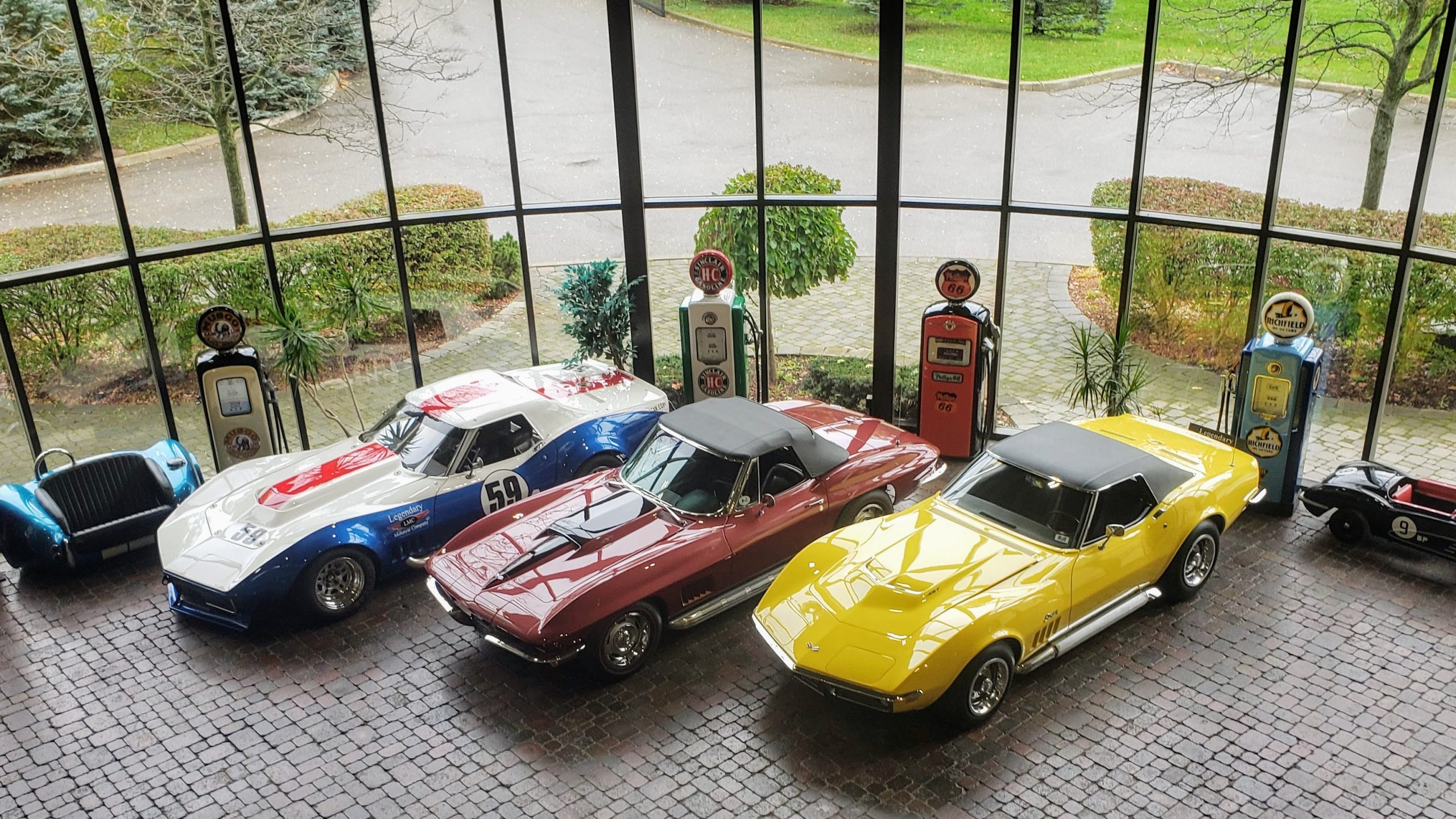 “We just sold the Dan Gurney polesitter GT40 MKII from the 66 Le Mans race. I don’t know if it was just a fluke, but if you think about the most valuable cars on the planet, the great majority of them, 250 GTO, Testa Rossa, 8C Alfa, so many of the great cars, even modern cars, the McLaren F1 road car is $20 Million, it was because of what the race car did. I would say that a big part of our business now is historic race stuff.

“I think the passion for racing came first and then, like so many things, when it's a passion, you’re not working at it, you just gravitate towards it,” says Klutt.

“From my own boys point of view, it’s great that they have an interest in the cars, in racing and are genuinely passionate about it. Ryan loves the racing, but he’s way more into the history of the cars, where Gary is less about the history. He still loves the history, but if you said you can run NASCAR or you can go do a vintage race, he’s gonna go NASCAR. If you said to Ryan, you can do a vintage race at Pebble or Laguna or Goodwood, or run a NASCAR race, he’s going vintage racing.”

With some 25 seasons of television completed, the Covid era began just as the final show contract came to an end, so the decision was made to move to YouTube and other social media platforms.

“We’ve tripled our subscribers over six to eight months. It’s time consuming and it is hard to see if there is a payback, but it was hard to quantify the payback on the show. I think like anything, it’s knowledge that’s getting out there. We’re looking at doing maybe a little less volume and more special cars.

“We’ve always had a wide range of cars. If you go downstairs, we’ve got a ‘36 Auburn boat tailed speedster and then here you’ve got a Bugatti Divo that they built 40 of, arguably one of the most exotic cars on the planet. Then you’ve got the Sixties muscle stuff. We’ve got a new drag pak Challenger. The idea is that we’re dealing in cool cars. It could be a $50,000 car or a $10 Million car, it doesn’t matter.”

Legendary Motorcar Company is located just off the 401 in Halton Hills and their showroom is a must visit. Likewise, all of their social channels are of the must subscribe variety.