Penske is returning to sports car racing. Will Helio Castroneves come along for the ride?

Auto racing columnist Norris McDonald kicks off the weekend roundup with some thoughts about the big sports car weekend at Old Mosport, F1, IndyCar and NASCAR.

The major race of the weekend around here was the Mobil 1 SportsCar Grand Prix held at Canadian Tire Motorsport Park that was won by Eric Curran and Dane Cameron. A full report appears elsewhere on this page.

There is no doubt that the IMSA Series is coming on big-time with name drivers (Sage Karam, Jack Hawksworth, Ricky Taylor) and teams (Corvette Racing, Wayne Taylor, Mazda Motorsports). And next year, Penske Racing will be returning to North American sports car racing with an IMSA entry. The rumour mill has Helio Castroneves driving but that remains to be seen.

But nobody’s denying it, including Helio.

Sports car racing is still No. 3 in North America but the competition is exciting, the personalities are interesting, the sponsorship is strong and the costs are contained. I see nothing but a bright future for this series.

Speaking of Helio Castroneves and Roger Penske, this is a reminder that this is Honda Indy week in Toronto. The IndyCar gang raced Sunday afternoon in Iowa (Castroneves was the winner; details below) and will haul into Toronto to set up camp by Thursday at the latest.

Free (Fan) Friday will kick things off (make a donation to Make-A-Wish Canada and you don’t have to pay admission) and then Saturday will feature the NASCAR Pinty’s Series race and IndyCar qualifying. The 2017 Honda Indy Toronto will go to the post Sunday afternoon.

The Honda Indy is more than the IndyCar series, of course. Support races include — in addition to the NASCAR race — the Porsche GT3 series presented by Yokohama, the Indy Lights, the USF2000 and others.

The next big-league weekend at CTMP will be the MOPAR Canadian Superbike Championship motorcycle weekend Aug. 18-20. National class races will include Pro Sport Bike, Amateur Superbike, Amateur Sport Bike, and the Kawasaki Ninja 300 Racing Series. Go to the circuit’s website for details.

After that, of course, will come the Chevy Silverado 250 featuring the trucks and stars of the NASCAR Camping World Truck Series on Labour Day weekend, Sept. 1-3. As well as the up-and-coming NASCAR drivers (some of the current hot-shoes in the Monster Cup Series — Chase Elliott, Ryan Blaney, Daniel Suarez and others — were racing just a few years ago in the trucks at CTMP), the Ultra 94 Porsche GT3 Cup Challenge Canada by Yokohama, the Canadian Touring Car Championship and the Nissan Micra Cup series will all be in action.

Meantime, there was plenty of big-league action elsewhere this weekend. 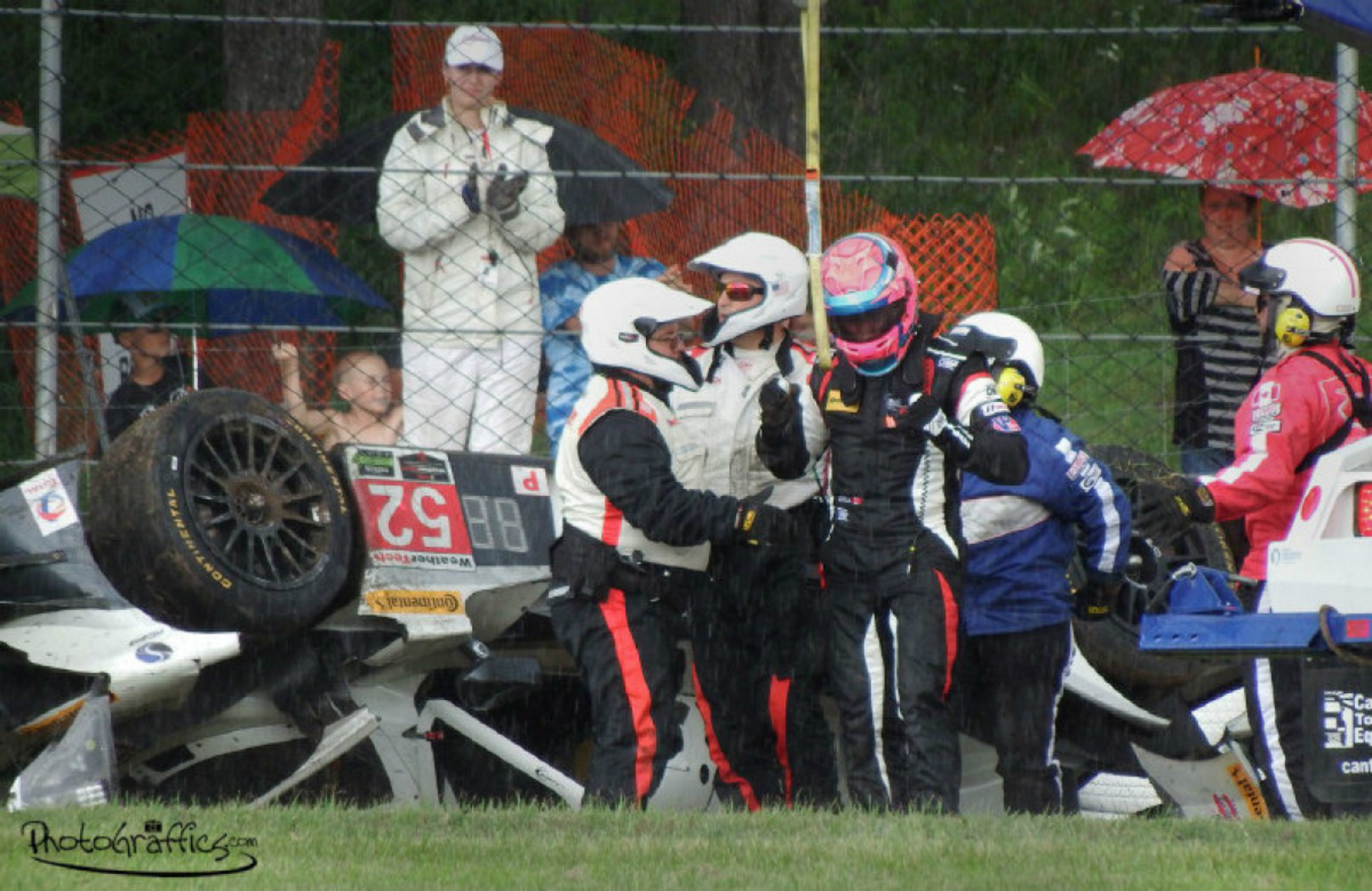 Valtteri Bottas won the Austrian Grand Prix for Mercedes (gee, what a surprise), with Sebastian Vettel second for Ferrari and Daniel Ricciardo third for Red Bull. Lewis Hamilton missed the podium, finishing fourth. Our Lance Stroll finished in the points again. He was tenth this time.

Other than accusations that Bottas jumped the start (he didn’t), It was a pretty ordinary GP: there was the obligatory first turn contretemps involving Daniil Kvyat, Fernando Alonso and Max Verstappen and then things settled down. Vettel nearly caught Bottas at the finish while Hamilton had a good run at Ricciardo but other than “good tries,” that was about all that could be said about that.

Vettel will now head for the British Grand Prix, 20 points ahead of Hamilton. And Vettel and teammate Kimi Raikkonen will be conducting a quick test at Silverstone of a shield that will wrap around the cockpit of an F1 car to better protect the driver. It is reminiscent of the canopy of a fighter jet and should work well. The halo that was tested last year has, apparently, been rejected (thank goodness).

A final test will be conducted at the Italian GP and then a decision will be made about making it mandatory for all F1 cars in 2018. Let’s hope so.

For a complete report on the Austrian GP, plus the order of finish, please click here.

Larson is turning out to be “the driver” of his generation. He is taking over from Jeff Gordon, Tony Stewart and Dale Earnhardt Jr. as everybody’s favourite. In the Cup series, hes always there. He wants to drive Indy cars, particularly in the Indianapolis 500. And he’s a chip off Stewart’s block, in that he loves nothing more on “off” nights than to race sprint cars.

He will be in the Toronto area July 24 and 25, racing at the Ohsweken Speedway on the Six Nations Reserve near Brantford. Rico Abreu will be there, too. On Monday, the 24th, the Northern Summer Nationals will be held while on Tuesday, the 25th, the World of Outlaws sprint car tour will be the headline show.

Get your tickets now if you are planning on attending. Those shows — particularly the Outlaw race — are always sellouts or close to being sold out. So don’t dawdle. If Tony Stewart comes — and it’s not beyond the realm of possibility — the remaining tickets will be gone faster than you can say the word.

For details and the order of finish of the NASCAR Monster Energy race, please click here. 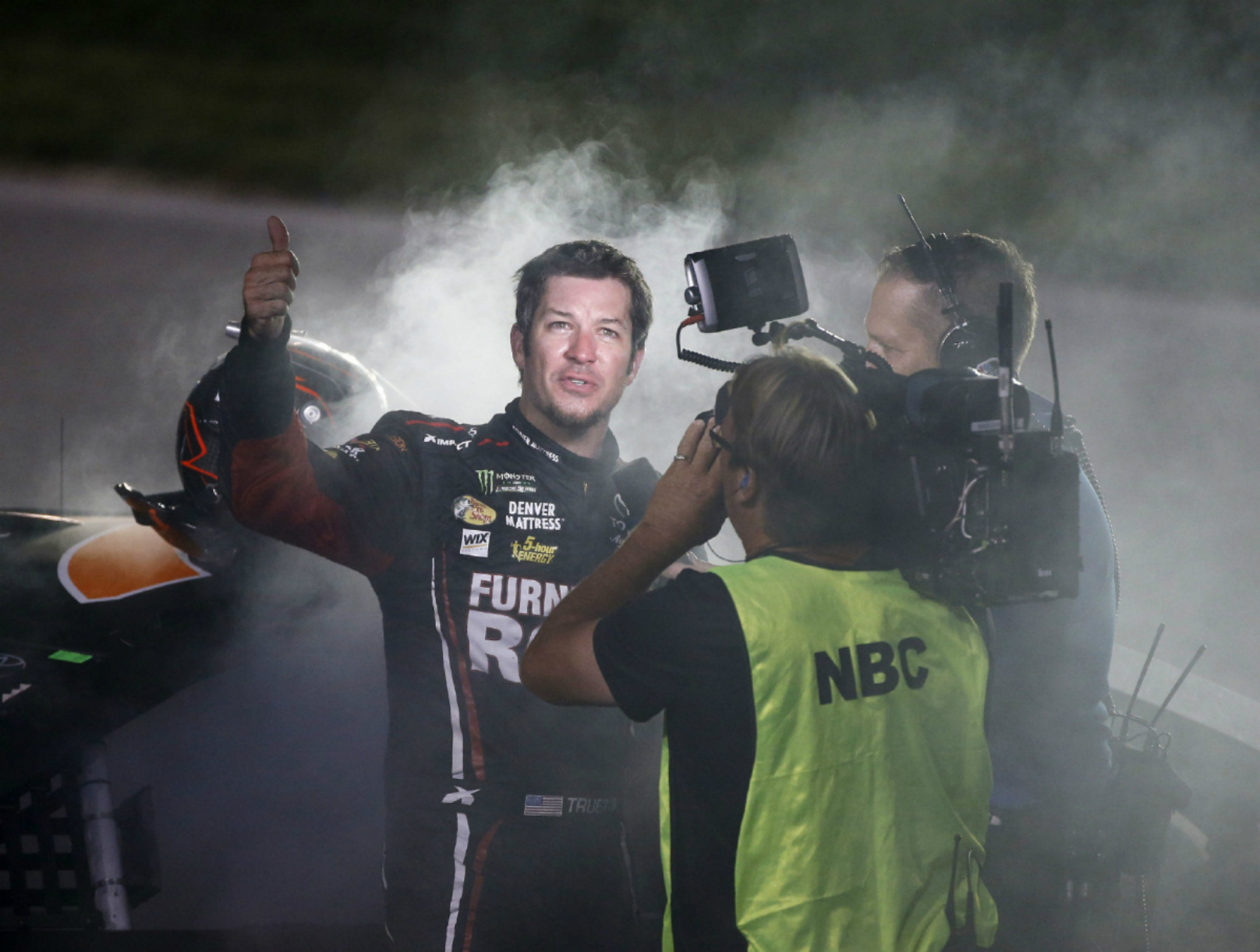 One other thing about NASCAR. Matt Kenseth has let it be known he won’t be back at Joe Gibbs Racing in 2018 and his plans are unclear. Plenty of people are suggesting Carl Edwards will come back to take that choice seat.

I think Edwards is done. He stopped because he thought it was getting to be too dangerous; why in the world would he make a comeback now, particularly with the Big Ones getting as vicious as they are? Somebody will be badly hurt or worse one of these days. If you’re under contract, you don’t have much choice but why would you come back to that if you didn’t have to?

Also, and this is very important. Sponsorship is not easy to come by in any form of racing these days but NASCAR is being hit particularly hard. It won’t be pretty to see, but as has happened with all the other big-league series in the world, pay drivers are going to move into NASCAR. The trucks are pretty much a pay series now, as is the Xfinity. Don’t be surprised when it happens in Cup. That Gibbs seat is likely for sale.

Now, I mentioned Castroneves going to race sports cars next season. Then he goes and wins that oval race in Iowa. It was his first victory since — I think — 2014 and I’m glad to see he’s still got it.

He’s driving a Penske. If he was in any other car on that grid, he would not have been in Victory Lane at Iowa Sunday. A Penske car gives you an edge. Sorry, that’s the way it is. Roger is a shrewd judge of talent. He knows not only who’s got it today but who’s going to mature into a really good driver of the future.

Helio was that guy, once upon a time. And he didn’t let the Captain down. He’s been a good soldier for years and years. So when Penske cuts back to three cars next year, he’ll move Helio to the IMSA series where he’ll still have full-time employment and a chance to win some more races — which, despite Sunday, he won’t be doing much any more in IndyCar.

Penske also rewards loyalty. He’ll have a car for Helio at Indianapolis. Plus one — again — for Juan Pablo Montoya. Plus his three regulars — Pagenaud, Power and Newgarden. Which is what makes Roger Penske such a class act.

A late caution in Saturday night`s NASCAR Pinty`s Series race at Circuit ICAR north of Montreal set up an overtime opportunity for Kevin Lacroix, and he pounced.

The 28-year-old driver out of Saint-Eustache, Que., used the extra laps to take the lead and hold off a charging Andrew Ranger to the checkered flag of the Ecko Unlimited 75.

It was Lacroix’s second win in three years on the flat road course of the Mirabel airport. This time, it was accomplished on the new .624 mile layout. It was also the second win of the season for Lacroix, the championship points leader four races into the 13-race calendar.

A caution for a stopped race car on Lap 73 pushed the race to 79 laps. Lacroix took the lead from Marc-Antoine Camirand coming out of turn one in NASCAR overtime. It was then a hard battle with Andrew Ranger, with Lacroix taking home the win by .114 seconds.

Ranger nearly passed Lacroix coming to line, before settling for second. Ranger has four wins and two seconds in seven starts at ICAR, including a runner-up finish to Lacroix in 2015.

Alex Labbe, who came into this race as the series points leader, finished fourth. Alex Tagliani won the E3 Spark Plugs Pole Award earlier in the afternoon and led a race-high 61 laps before coming home fifth.

Thanks to Alex Gallacher of NASCARHomeTracks.com for the preceding report.

At Merrittville Speedway near Thorold, Modern Corporation’s annual Big Rig Truck Show and Shine Night was a big night for three drivers. Not only did Thorold’s Brent Begolo win his 5th Wood Motor Company Modified Lite Feature, he would also take home his 1st win of the season in the S&W Service Centre Sportsman Division.

Tony Kelly of Niagara Falls won for the fourth time in the Central Fabricating & Welding 4 Cylinders with Greg Rauscher of Thorold also a five-time winner in the Novice Sportsman Division in the Bobcat of Hamilton Weekly Racing Series Event.

My thanks to Jim Irvine for the report on Merrittville.

Kami Laliberte of Montreal won a pole in the German F4 Series at the weekend but the rest of his results didn’t quite match up. That’s a tough series, though. Mick Schumacher races in it — and you know where he gets his racing genes, don’t you?

The SuperDIRTcar Series race scheduled for Cornwall Speedway Sunday night was rained out. They’ll try again at a later date.

At Ohsweken Speedway Friday night, a total of 128 — yes, that’s correct: 128 cars — packed the paddock for the Frankie Turkey Memorial and Media Appreciation Night presented by O’Neil’s Farm Equipment and Case IH to start the month of July at the speedway. When the final checkers waved, it was Dyland Westbrook, Holly Porter, Ryan Dinning, Jon Janssens, Bobby GTolton and Dustin Longboat who stood in Lucas Oil Victory Lane. My thanks to ace PR man Clayton Johns for that report.

That’s it for this week, folks. Enjoy live racing next weekend, starting with the Pinty’s NASCAR race at the CNE Saturday and the Honda Indy Toronto in the same place Sunday. And don’t forget to make it out to your local speedway Friday or Saturday nights.