Island province is the first to offer the same $5,000 rebate to both new and used electric vehicles, plus free charging stations

Prince Edward Island is joining a larger Atlantic Canada push to sell more electric vehicles, after the PEI government announced a new $5,000 rebate for all-electric vehicles, just a few weeks after a similar EV incentive was announced and implemented for neighbouring Nova Scotia.

But in a first in Canada, the island province will provide the same $5,000 rebate both new and used electric vehicles. The same goes for PEI’s plug-in hybrid rebate, which provides for a $2,500 rebate for the sale or lease of a new or used PHEV at any dealership on the island, which will then be reimbursed to the dealer by the government.

On top of that, the PEI government also said it will provide free Level 2 charging equipment for all EV buyers, as well as waiving the $100 annual registration fee, another ongoing cost saving for EV buyers on top of lower fueling costs.

It won’t cover the cost to install that L2 in one’s garage or driveway, but it can also be combined with the $5,000 federal EV rebate on a new electric vehicle, and shares a similar price cap of $55,000.

“Since the announcement our doors have been knocked down,” he said, “We’ve sold about five in the last couple weeks.” 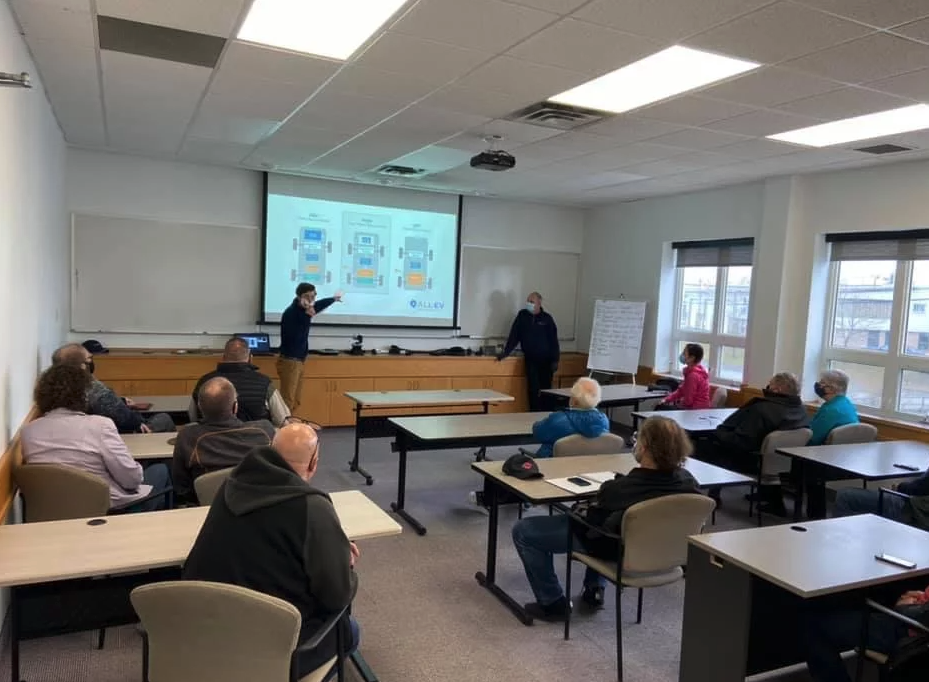 That’s roughly the same number as the Charlottetown dealer has sold since it became EV certified in mid-2019, he said, explaining that for about the first year, they couldn’t actually get their hands on any EVs from Hyundai, despite investing in the equipment and training for service technicians.

For used EVs, there was already a market, but clearly that has increased since the announcement, said Jeff Farwell, CEO of All EV Canada, a dealer group that sells only used plug-in vehicles at its two dealerships in Atlantic Canada, in Charlottetown and in Dartmouth, Nova Scotia. The two government program announcements in PEI and Nova Scotia were made in their province’s respective All EV Canada dealership, which sells EVs from every brand including Teslas, some with less than 1,000 km on them and others older and more affordable, he said, sourced from other provinces or the U.S.

“The fact that it’s available for new and used EVs is really significant,” he said. “They’re going to really make a difference in this province (PEI), which I think will have the highest adoption of EVs (per capita) in the country,” he predicted, helped by the free charger offer and significant government support.

He noted that in PEI, the government hasn’t fully communicated all the details and payment parameters with all the dealers yet, after its March 18th announcement, but notes that foot traffic into the Charlottetown dealer has definitely increased, and Farwell is looking to increase inventory at the store.

Finding electric vehicles at dealer lots, new or used, and has been particularly difficult outside of the three most populous provinces. A study released last year by Dunsky Energy Consulting for Transport Canada concluded that two-thirds of dealerships in Canada (67 per cent) did not have any plug-in vehicles available in inventory at all.

Most of last year’s EV inventory last year resided in lots in BC and Quebec – the only other provinces to offer purchase incentives at the time, the study found. The province of Quebec on its own had 57 per cent of the nation-wide stock, and concluded that there needed to be an increase in plug-in inventory as well as harmonization of EV rebates and policies to keep up with growing sales across the country.

The confirmation of EV incentives in PEI and Nova Scotia in the past six weeks certainly seems to be increasing demand for them in those areas during these early weeks of their respective programs, and Experience Hyundai’s Fraser is looking now to maintain a steady supply of them on the lot, he said.

He has about nine on the lot now, and expects to have at least five available on the lot for test drives or purchase at all times.

As for Farwell, who is an EV enthusiast and drives a Tesla Model X, now it’s a matter of educating consumers about what’s different about electric vehicles, how much money drivers can save operating them, and now acquiring them as well, with $10,000 off new all-electric vehicles and $5,000 off new PHEVs, once the federal and PEI EV rebates are combined. His used EV-only dealerships provide free two-hour info sessions on how to choose the right EV, as different driving routines and living situations can make a big difference, if you’d like to maximize savings and convenience.

“I can tell them that with my driving, I used to pay $2,500 a year in gas, and now I see an extra $500 on my electricity bill,” he said. That will of course vary with people’s driving patterns, but the savings add up quick, so we’re just trying to give folks the information they need to make the right choice for them, he said.