Fifty years ago, an experimental Shelby Mustang slipped through the cracks of automotive history.

We all know what it’s like to misplace something. However, most of us lose track of items like eyeglasses or a phone charger. Fifty years ago, an experimental Shelby Mustang slipped through the cracks of automotive history. This week, after an exhaustive search which ended with the car being found abandoned in a Texas field, it was shown fully restored at the Barrett-Jackson auction in Scottsdale, Arizona.

Called “Little Red”, this 1967 Shelby GT500 EXP was an experimental car fettled by Shelby American to test new ideas. The notchback was a pivotal developmental car with a variety of concepts put into play, from a restyled body to adding a Paxton supercharger to the big-block engine. Under the direction of Lee Iacocca, the car eventually became the model for Ford’s popular 1968 Mustang California Special before it was moved to storage and presumed lost. It’s also the second GT500 to be serialized and completed.

And before you ask – yes, the car was stored in outdoor conditions for nearly two decades before being unearthed in a Texas field in March 2018. As one would expect, the restoration of Little Red was a meticulous project, given the state of the car when found and the desire to restore it back to an exacting specification. 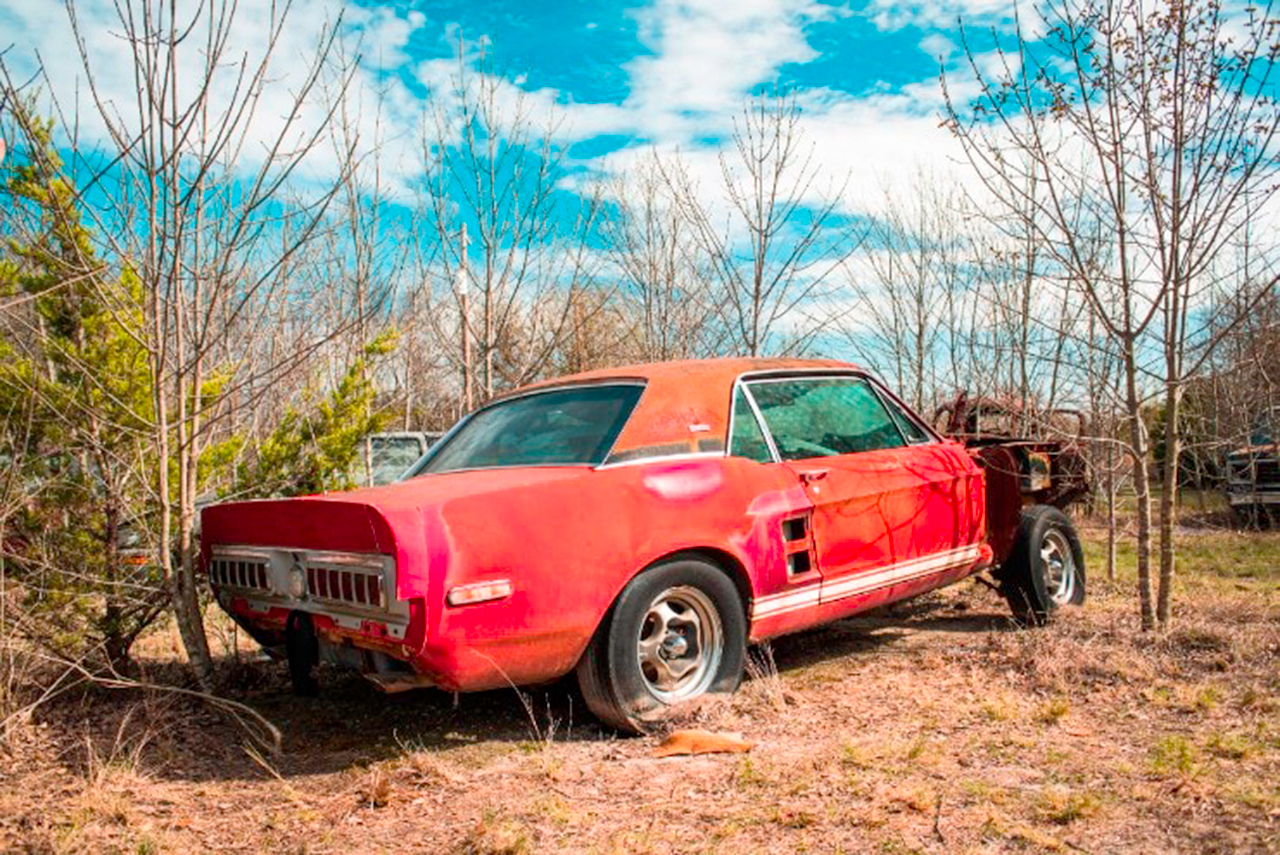 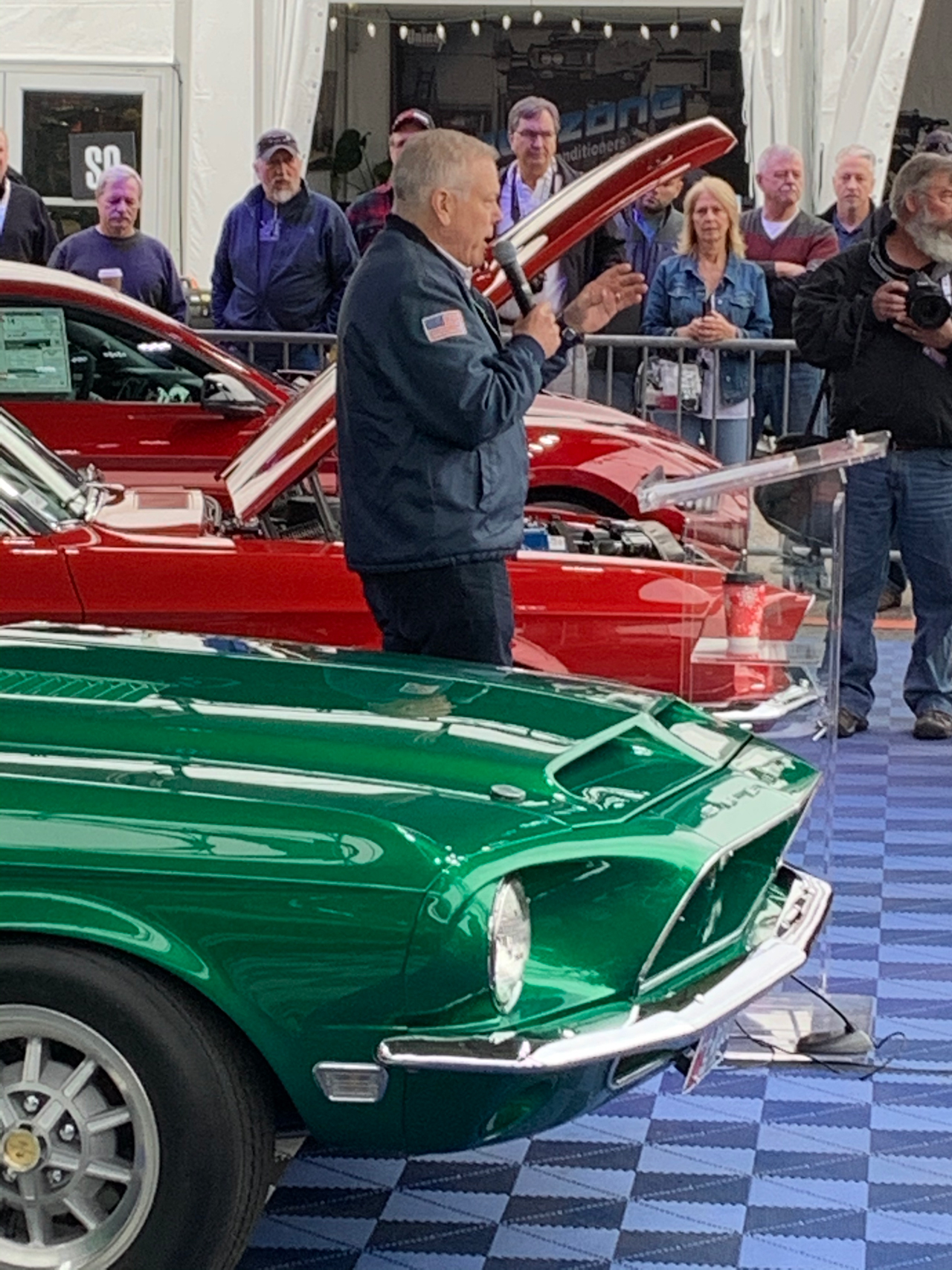 The unveil also featured Jackson’s 1968 Shelby GT500 prototype known as the “Green Hornet”. Today was the first time in history both experimental Shelby GT500 Mustangs have been seen together. The 1968 was another important experimental car, featuring kit like an independent rear suspension, four-wheel disc brakes and, electronic fuel injection. The IRS alone was notable, as we all know how long it took for the Mustang to finally lose its log axle.

When asked what impact the discovery and restoration of Little Red and the Green Hornet will have on collector interest and Shelby in general, Craig Jackson, CEO of Barrett-Jackson, told us “The correlation between the old cars and the new cars raises the excitement,” and that “This is the DNA that led to these new cars.” It’s safe to say the man fully expects Shelby Mustangs to remain popular and profitable. He’s right, too. 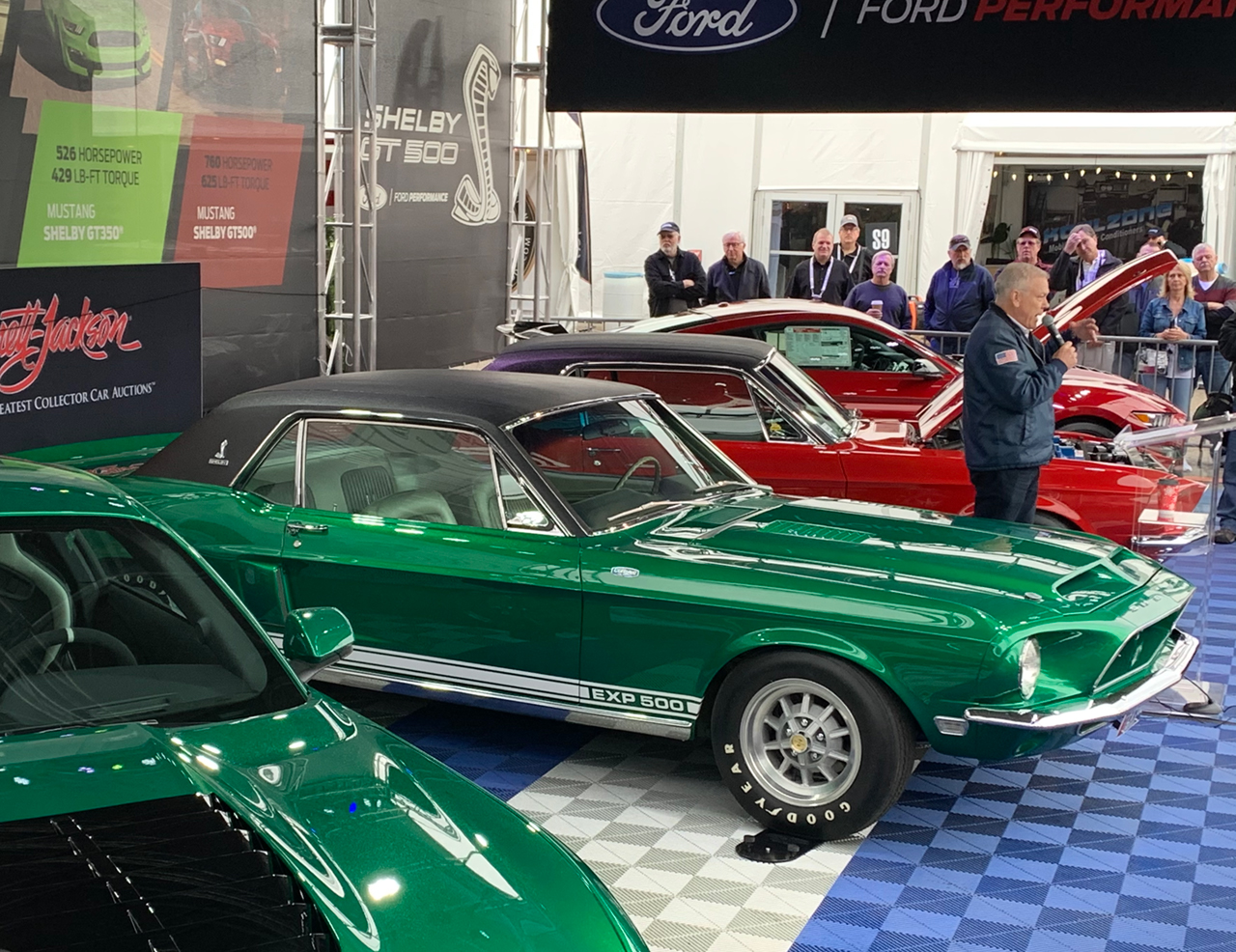 The new cars of which he speaks are the recently unleashed 2020 Shelby GT500, a series of 760 horsepower fire-breathers. Powered by a supercharged 5.2L V8, they are the fastest and most powerful Mustangs ever to roll off a Blue Oval assembly line. The Candy Apple Green model shown here is the first model (VIN 001) to be produced at Flat Rock last fall and was joined by a Rapid Red. Both are owned by Jackson, who paid $1.1 million for VIN 001 last year in Scottsdale with proceeds going to Juvenile Diabetes Research Foundation.

Following the presentation, all four Shelby Mustangs were started in unison. This made a sound not unlike God ripping his bedsheets apart, as the quartet represented over 2600 horsepower. 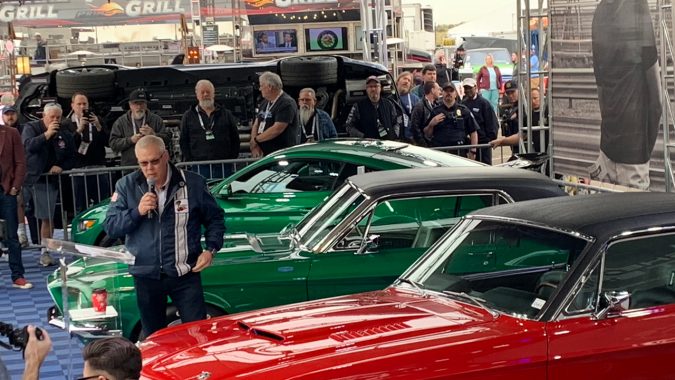 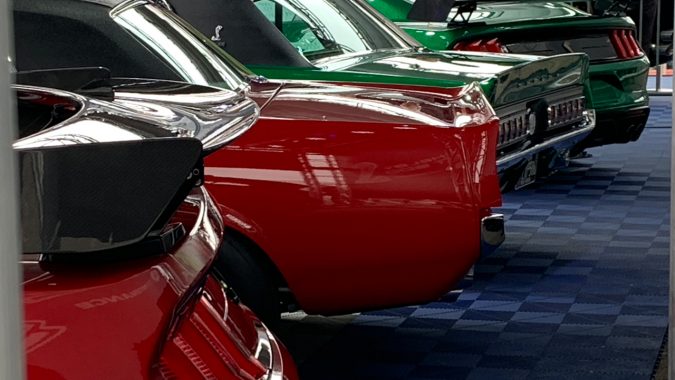 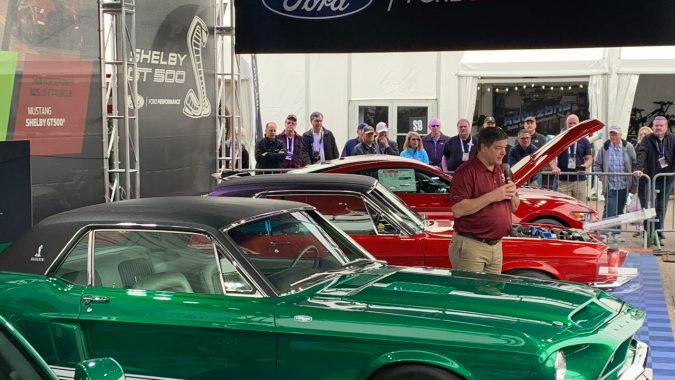 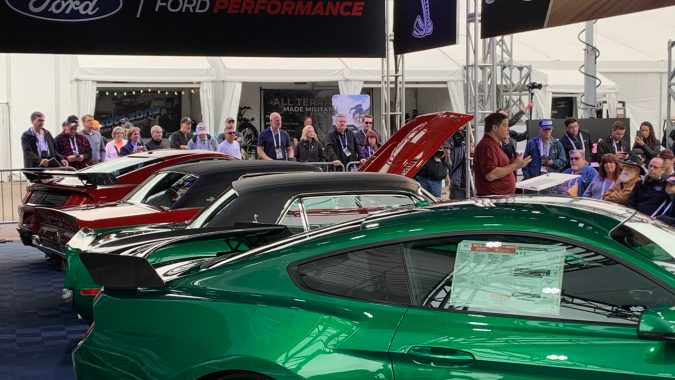 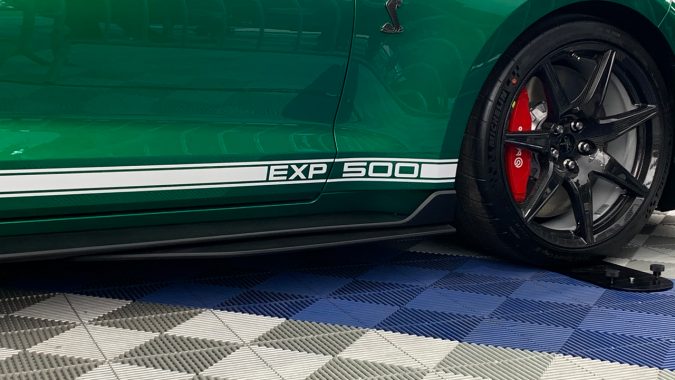 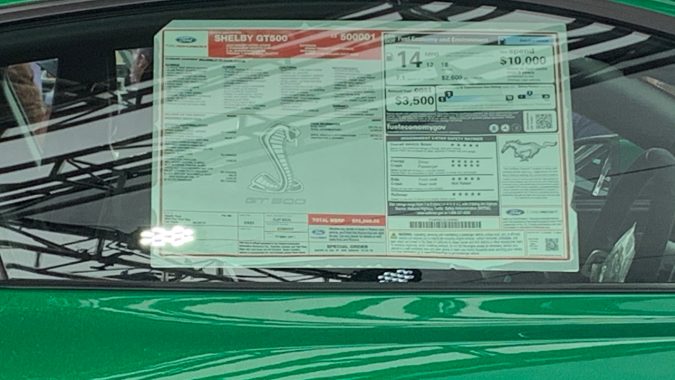 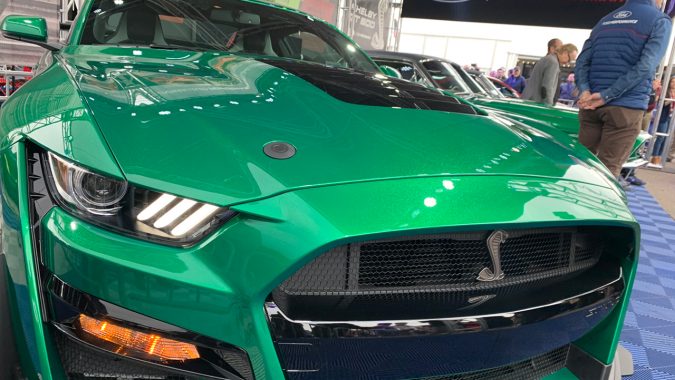 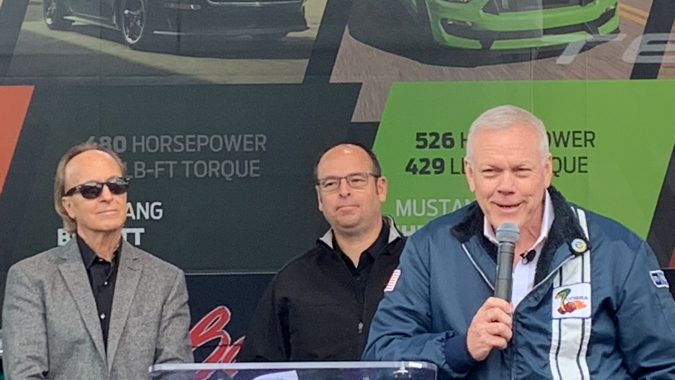 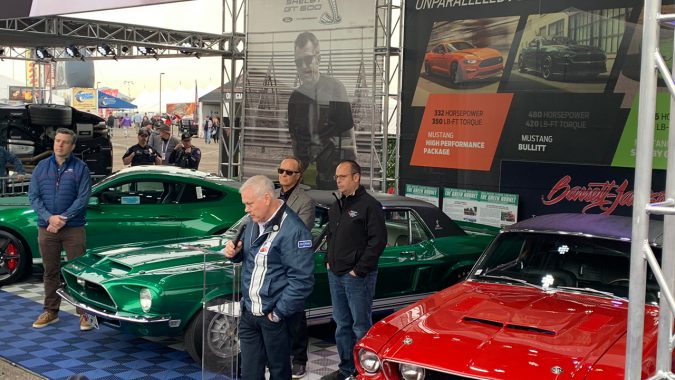 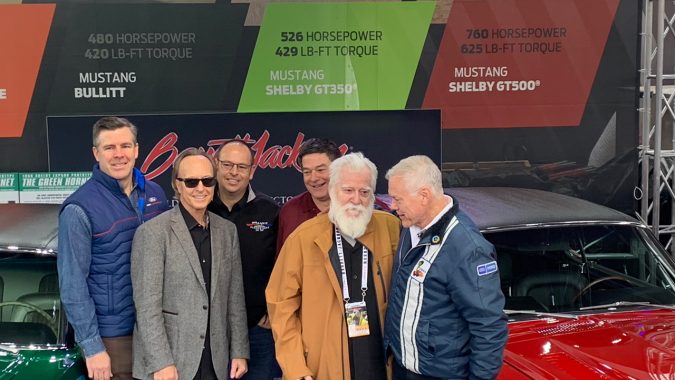 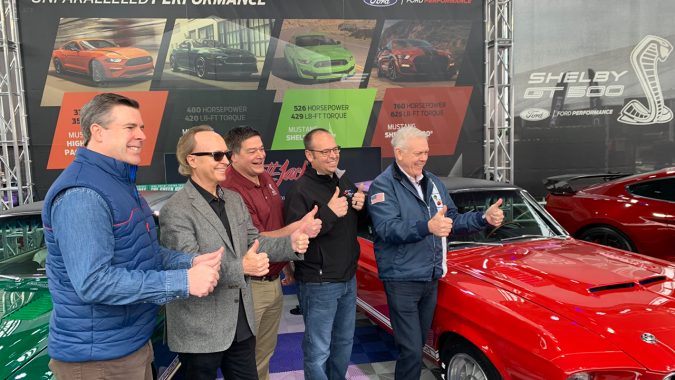