Granatelli died on Sunday in California of congestive heart failure at age 90.

Michael Schumacher remains in stable but critical condition. Here is a link to the latest news story.

Now, as I was driving out of my Mississauga neighbourhood on New Year’s Day, heading for Hortons, I passed a delightful sight. A father was out with his little guy, who was at the wheel of a miniature car. The boy was probably between 2 and 3 years of age and just getting mobile. What warmed the cockles of me old heart was that Dad had insisted his son wear a helmet.

Contrast that sight with the old timers’ hockey games in Detroit on Tuesday that preceded the Winter Classic. Here were all those great players for both the Leafs and the Red Wings – Lanny McDonald, Sittler, Tiger, Dougie, Chelios, Shanahan, Stevie Y. – and fully half of them didn’t bother to wear a helmet.

I guess cliches like “you can’t teach old dogs new tricks” and “get ’em while they’re young” come to mind when looking at those two scenarios, but with the news about Michael Schumacher being so fresh, you’d have thought some of those older guys might have considered what would have happened if they’d fallen and hit their heads on the ice.

Oh well, maybe they hadn’t heard the news. Or else they figured there probably weren’t any rocks on the ice.

Moving right along, I thought today we would continue our series about great motorsport literature by taking a look at Andy Granatelli‘s book, They Call Me Mister 500. Granatelli died on Sunday in California of congestive heart failure at age 90. But in his heyday atIndianapolis, which was between the late 1940s and the mid-1970s, he was one of the most colourful characters ever to walk through the gates of that institution at the corner of Sixteenth Avenue and Georgetown Road.

Not only was he a promoter of the sport but he entered cars in the 500 for years and was an innovator. On top of everything else, he even drove once and just about killed himself in the process. Here is an excerpt from his book in which he describes what happened in 1946 when he and his brothers, Joe and Vince, decided for the first time to enter a car in the Indianapolis 500. At the time, they were living in Chicago. 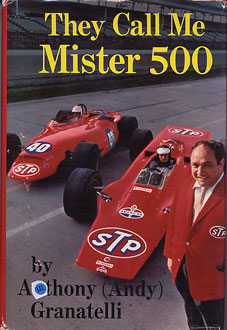 We worked for weeks, scarcely sleeping, hardly pausing to grab hamburgers, and slowly the car took shape. It finally sat there and just glistened. It showed every promise of flying, but there were still problems, such as: How were we going to get it to Indy?

“Look,” Joe said, patiently. “I got to keep telling you that we’re just about broke. We can’t afford the race, don’t you see? I mean, for instance, how are we going to get the car down there? We haven’t even got a trailer. And even if we had a trailer, we couldn’t pull it because your car engine is in the race car.”

I went to bed on it. I woke up in the middle of the night. I pulled on a pair of pants and walked over to Joe’s place and shook him awake. “Joe, Joe,” I said.

He opened one eye and looked at me. “I know what you’re going to say. I just know it.”

He swung his feet out of bed and padded over to the icebox and opened it. He carefully opened a bottle of Pepsi and drank a few swallows. Then he sat down at the kitchen table and put his chin in his hands.

“Look,” I said, “it’s simple. We hang some Illinois licence plates on the car and we drive it to Indianapolis. Why not? We still have the mufflers on the thing, and . . .”

“Look, we’ll put lights on it, too. I’ll put in hot and cold running water if you want? Are you game?”

And we did it. It had to be one of the most triumphant arrivals anybody ever made at Indianapolis. There were Joe and I wheeling into town in our two-seater race car. It had run like a watch, all the way from Chicago, just howling along. When we parked it at Gasoline Alley, it just sat there, sort of humming quietly to itself as we checked in.

“Where’s yer race car,” the guy said. He had glanced at the Miller-Ford and raised his eyebrows. “You mean you . . .”

“Certainly, we drove it here. If it’s supposed to go 500 miles in a race, don’t you think it would last down here from Chicago?”

The guy walked around, looking dazed. “Hey, you guys,” he said to a couple of old-timers. “Come here a minute. You won’t believe this.”

“So this is Indy,” Joe said, as he looked around, whistling. “Nice place.”

In 1948, with a brand new car, the boys took another shot at the big race. During practice, their driver, Pete Romcevich, could only get it up to about 117 miles an hour while the great Rex Mays was turning 123 mph laps. Finally, Andy Granatelli had had enough.

Joe looked at his calloused hands and nodded. “I ought to know, if anybody does.”

“Well then, I’m going to do something about it.”

And I wheeled and walked down the track, down toward the main gate where Wilbur Shaw was standing with a group of men. Shaw was then the top executive at the Speedway (Norris Note: his autobiography, “Gentlemen, Start Your Engines,” is a great read, too) and his word was law. I had both fists clenched and I stormed up to them.

He looked over at me and arched his eyebrows. Rex Mays – the Rex Mays – was standing there in the group.

I was wearing my impossible-dream look. Shaw looked hard at me for a long time, then he pursed his lips thoughtfully.

“Well, kid,” he said, “I’ll tell you what I’ll do. If you can drive this track for four laps at race speed, I will personally sponsor you for your driver’s test. Personally, understand. If you can’t drive four laps at speed, then I suggest you go back to being a mechanic.”

He grinned. “One hundred and twenty-five miles an hour.”

Andy somehow managed to pass his test. But then came the day he had to qualify the car. Remember, as it says in the book: this was early Indy – no seat belts, no shoulder safety harness, no flameproof overalls.

It’s funny about a crash. I mean, in that terrible instant when you know you’re going to crash, that’s it. At least the situation has been resolved and there’s no more to worry about. You know the thing is going to go into the wall and the next thing you have to think about is how to get away from it alive. First thing I thought about was those chest injuries. Chests crushed against steering wheels.

I half-turned in the cockpit and crouched. I managed to get my right shoulder against the steering wheel and my head down under the cowling.

Suddenly, I remember. I knew that when cars hit the wall – quicker than the eye can see – there is a tendency for them tohit the wall twice. They slam into the wall and naturally bounce back. But the fact that their wheels are still propelling them, plus centrifugal force, makes them slam into it again, just as hard and as fast as the first time. It is the sort of thing that happens in a twinkling: it shows up in slow-motion sequences of smashups.

Exactly. I had determined that if I was going to hit the wall, best thing would be to hit it with full power on. That way, if I was lucky, the car would not bounce back but go right up and over the wall. And if it went over, I had a better chance of surviving. And then it came.

The car slammed savagely into the wall. Pow!

And it went up and almost over.

The impact snapped through my body like lightning; my helmet flew right off, snaps and all, and went arching up into the air. (My secretary, Doris Parrish, seeing it, thought it was my head. She fainted.)

For 300 yards, the car straddled the top of the wall, tearing and ripping.

The sounds of disaster are incredible. The crash – when one is in it – is terrifying.  But the noise is worse. I sat there – hung there, actually – sometimes upside down, crouched deep in the cockpit, and heard the scream of metal against concrete, things tearing and ripping away. It was an unearthly scream. The car was being ripped to bits, with me in it.

And the part about seeing stars is quite correct. I was fully conscious, blinking, breathing, but all around the edge of my vision there were stars and bright blobs of light swimming in and out of sight. Metal kept tearing away and there was time, somehow, to review my whole life.

Everything I had ever done flashed past in one quick sequence. And there was one final, quick flash.

Listen, I thought to myself, I can’t die just now. There is too much I have to do yet. I haven’t got time to die right now. And inside me, a warning buzz kept saying, you’re as good as dead. No. Wrong, I kept saying. I’m not dead. Sorry. And then I got another flash.

Trouble was, I was still crashing. Still, I managed to get my arms up over my head – or under my head, as I was flying along upside down – and the shock slammed them both back. It broke my right arm and elbow and hand instantly. I could feel the elbow pop right out. I rolled my head back to look up and something hit me in the face. It ripped out 11 teeth in one quick burst.

Then, suddenly, it was all over. 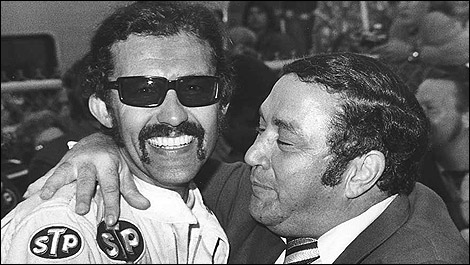 They Call Me Mister 500 was published in 1969 by Henry Regnery Co. of Chicago and by Copp Clark Publishing Co., Toronto. Like many of the books reviewed here in the last few weeks, it is available on eBay or at Amazon.com.