Opinion: Is This The Future of Sports Cars?

Can an EV like the Porsche Taycan really scratch the sports car itch?

Join the Conversation (2)
Car enthusiasts do not like change — even if that change is a technological or performance-enhancing improvement.

Whether we’re talking about electronically-controlled fuel injection, all-wheel drive, or power-adders such as turbochargers making large horsepower numbers from small displacement engines possible, the old guard of sports car “enthusiasts” have historically grumbled, scoffed and belittled anything which isn’t exactly what they already know.

That’s why it’s really difficult to take seriously the misgivings of electric sports cars as presented by your uncle on Facebook whose profile picture is of their ‘02 Corvette and a set of golf clubs. Because historically speaking, uncle Jim has always been wrong when it comes to the merits of new technology.

Nowadays, hot hatchbacks, sports sedans, grand tourers, muscle cars, and in some cases supercars all sort of get lumped into the “sports car”  category.

It’s a definition which manufacturers are certainly eager to make more inclusive. It’s why Ford now thinks an Explorer with an ST badge on it counts as a “sports car”. SUVs and trucks, like hot hatchbacks before them, are attempting to offer buyers less compromise in their desire for thrills. And like the hot hatchbacks before them, sporty SUVs are definitely finding success in the market.

So, if just about anything these days can be a “sports car”…  can a battery-powered station wagon be one? What if it’s engineered by arguably the best sports car brand in the world? And if so, is this what we can expect more of in the future?

The answer to the latter is a very definitive “yes”. Porsche will be making a major investment in electric technology. By 2025, Porsche estimates 50 per cent of its vehicles sold will be fully electric. By 2030? Eighty per cent. For the vast majority of new Porsche buyers, the EV experience will be the one they get. 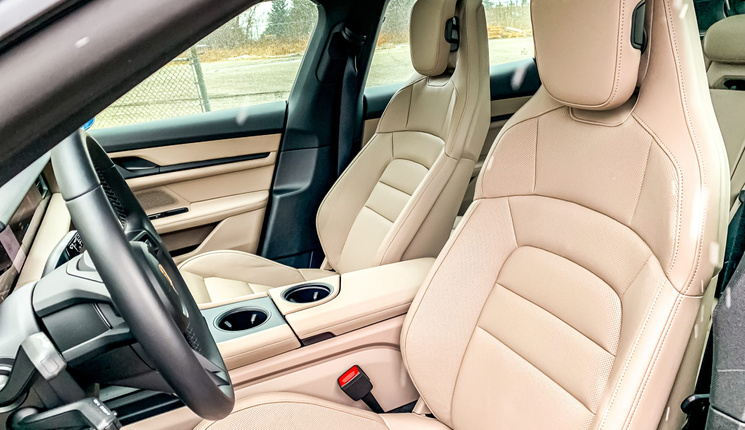 But what about this specific car? The Porsche Taycan Cross Turismo? Is it fun to drive? Does it bode well for the future for the future of sports cars? Or does uncle Jim have a point this time?

We’ve already covered how obnoxiously fast the top-of-the-line Taycan Turbo S Cross Turismo is. It has 750 horsepower. It does zero to 100 km/h in under three seconds. It also starts at around $220,000. Which puts it into borderline unattainable “dream car” status.

The other-worldly performance really isn’t surprising. We’ve all seen in one YouTube video or another how spare-no-expense EVs can turn the neck bones of their passengers into dust. EVs have the potential to reliably accelerate faster than ICE cars. That debate seems mostly settled.

But what about the EVs which aren’t the spare-no-expense, top-of-the-range models — where ruthless, other-worldly acceleration can’t be the inferno hot sauce on the meal of the driving experience?

In contrast to the Turbo S, the entry-level Taycan 4 Cross Turismo is the least powerful, slowest and… I was going to say “cheapest”, but let’s instead go with “most affordable” Porsche Taycan model you can buy at around $120,000.

And that’s interesting because with 470 horsepower, and zero - 100 km/h times around the five-second mark (a very minor MSRP premium bumps you up to the 4S model with 562 horsepower and four-second zero to 100km/h times), this is the electric Porsche most customers will actually buy. Indeed, the Taycan this year has outsold both the Tesla Model S and Porsche’s own 911. So the Taycan is now more popular than the world’s most well-known electric car and most well-reviewed sports car. 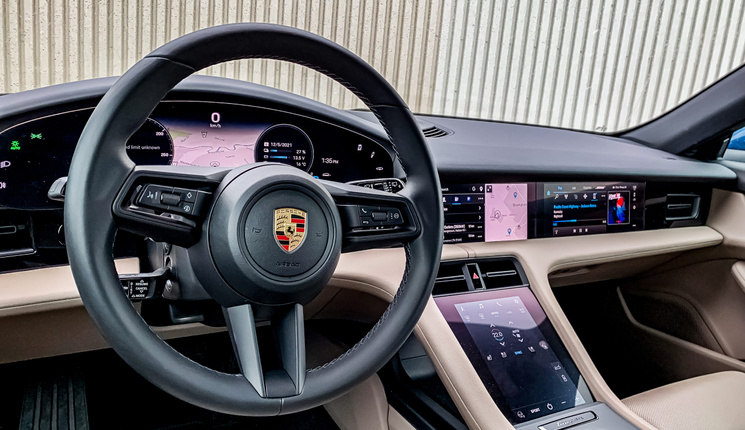 The standard Taycan is also the one which most closely mimics the performance of a wide offering of traditional sports cars. The Honda Civic Type R, to the Mustang GT, Toyota GR Supra, BMW 240i and even Porsche’s own line of 718 models all fall in between that five to four second zero - 100 km/h acceleration range.

So is an electric station wagon made by Porsche as fun to drive fast as any of those other cars (most of which can all be had for half the money)?

Driving an EV — even a Porsche, is not nearly as fun or joyful as any of the cars I just mentioned. Despite identical performance figures and all of the Porsche DNA that has been kept alive in the Taycan.

Don’t get me wrong. I really, really, really like the Taycan. In fact, I think if I could pick any car in the world right now to have as a daily driver, I would probably go for a Taycan 4S.

The interior quality is lovely. The ride is superb. The UI is simple, intuitive and wonderfully designed. I usually loathe touchscreens in new cars but I found that, despite the Taycan’s exclusive use of touchscreens in place of traditional instruments, the systems were all seamless to use in real time.

I even enjoyed my general EV experience. I liked not having to stop at gas stations and instead, just charge up at the place where I was going. And yes, I felt a great sense of superiority when I was permitted to use an EV parking spot at a busy mall during the height of holiday shopping. As everyone else circled the parking lot endlessly looking for a free space… I was charging my car while doing my shopping. It also cost me about half to charge the Taycan than what I would normally spend to fill an equivalent car with gasoline for the week.

The Taycan, despite its sheer girth, is also exceedingly capable on the backroads — seemingly defying the laws of physics while syncthing through corners. The steering, the grip and the chassis offer you greater levels of comfort than a glass scotch after a turkey dinner.

It is far and away a nicer, more refined car to drive than any of those “half-the-money” sports cars I mentioned earlier. And because it’s an all-wheel-drive station wagon, it’s easy to use every day. There’s zero drama when driving it on wet roads or through a snow squall.

The Taycan’s acceleration in the real world feels beefy, and imbues the driver with a schoolyard  bully-like attitude on the highway. The Taycan’s 280 kW battery delivers a firm pressure into the centre of your chest when using launch control. A great trick of EVs — instant torque

Also, while an electric Porsche station wagon might not be the flashiest car in the world, it comes with a certain quiet confidence. You can feel it in the way people react to you and the car. It changes your image in a positive way. If a Lamborghini is a purple bedazzled suit jacket, and a Dodge Hellcat is a trucker hat with flames on it, a Porsche Taycan is just a clean black t-shirt.

A general consensus amongst both my spouse and various friends concluded that the Porsche Taycan Cross Turismo, an electric station wagon, was the “sexiest” and “coolest” car I had ever driven. That has to count for something.

I found myself growing exceptionally fond of the Taycan in a way I didn’t think I could for any EV. It is among the select few vehicles I drove this year which I wish I could just live with every day. I simply did not want to give it back to Porsche at the end of the week.

But, despite my affection for it, I have to admit that the Taycan is simply not as fun or engaging to drive as a traditional ICE car. The Porsche magic is present here. They’ve created a machine you can feel mostly engaged with. And I’m amazed they pushed it as far as they did. But there’s a level of connectivity, of life, that’s so important to the sports car experience, that is missing in the Taycan.

Porsche got really close with the Taycan — close to the real thing. It's like Beyond Meat. Close. But not quite. And it’s that little bit that makes all the difference.

The problems begin the second you get in the car. The ritual of turning a key, igniting an engine and hearing it roar to life is nonexistent in the Taycan. The car is simply “on” and ready to drive the second you unlock the door.

And while electric power can certainly match and even best what gasoline-power can do in terms of performance, you don’t feel that performance in the same way. Everything in an electric car is just sort of “on”. There’s no build up, no crescendo, no music. It’s inorganic in every way.

There’s a kinetic flow and connection one experiences as you push an engine through its rev range. Feeling the power of the engine become inertia which travels into the pavement and propels you forward is what makes driving sports cars fun.

It’s an imperfect, inefficient process. And that’s the point. Imperfection is the root of humanity. When that humanity is absent, it’s hard to relate to a product.

Driving sports cars is not all about sheer speed. Or even capability. It’s about feeling like your car is alive, that you are connected to it and that you are achieving something together.

An EV, even a sporty one, even one with as much engagement and character as Porsche has miraculously managed to engineer into the Taycan, simply cannot provide a totality of sensation the way an ICE car can. Thousands of tiny explosions a minute create feedback. They create a sense of life.

I really want a Taycan in my life. The same way I want my iPhone or my MacBook. They’re lovely things to interact with every day. Marvels of engineering and for all intents and purposes, “perfect”. But replacing my iPhone or MacBook is going to feel routine. I’ll feel nothing for them when they’re gone.

My dog, on the other hand, is really inconvenient and annoying. She chases skateboards. She wakes me up to go out in the middle of the night. She once tore up the comforter on my bed. But replacing my dog is going to be a much, much sadder experience than my iPhone or MacBook, because she’s a living thing. My dog is a companion. My iPhone is a utility.

Sports cars at their best should feel like companions. And sincerely, I’m not convinced an EV can fully replace that experience.

But maybe it doesn’t have to. Porsche is still planning on selling 20 per cent ICE vehicles. And in combination with their investment in eFuel, that means there still could be sports cars which offer a more traditional driving experience for years to come.

Enthusiasts should not be bemoaning the arrival of the age of the electric car. If anything, they should be encouraging daily commuters to adopt EVs as quickly as possible. Because for the general driving public, I think it’s impossible that they won’t simply adore the EV experience. And the more EV drivers are on the road reducing tailpipe emissions, the more wiggle room enthusiasts will have to enjoy the traditional sports car experience.