Join the Conversation (0)
MONTREAL-Matthew Crossan of London, Ont., has been selected as the Canadian winner of the Infiniti Engineering Academy competition.

Some 397 engineering students from across Canada applied for the two-day competition; the top 10 were selected for the final tests, held the day before practice began for the Canadian Grand Prix last weekend.

The students were grouped into two teams of five and given a series of tests and technical challenges that had to be completed in a time-sensitive, high-pressure environment.

The final test was a drag race between model cars that the two groups had to design and build from a set of components supplied by the organizers. While not necessarily the deciding factor, Crossan’s team won four of the five heats; in the other, both cars ran off-course.

At all times, the students were being watched carefully by the judges: Andy Todd, director of body and exterior engineering at the Infiniti Technical Centre in Europe; Charlie Martin, composites design engineer for Renault Sport’s Formula One team; and Stephen Lester, managing director of Infiniti Canada.

A gaggle of Canadian automotive journalists, including yours truly were also on hand. We interviewed and evaluated the students, and apparently our comments were considered in the final judging, although we were not sure exactly to what degree.

They — well, ”we” — were looking not only for academic capability (which was more-or-less guaranteed by the fact that all these students had made it this far) but also on their ability to work within a team.

When Renault Sport Formula One driver Nico Hulkenberg (a surprise visitor the students were not expecting) announced his name as the winner, Crossan said, “I couldn’t believe it!”

Later, he added, “I met nine other very capable and strong candidates in the final who were all deserving of the opportunity, so I feel very fortunate to be selected as the winner. I can’t wait to get started, and I will give it my all to prove I am a winner worthy of this amazing opportunity.”

Tommaso Volpe, Global Director, Infiniti Motorsport, was on hand for the competition, and noted, “With every edition of the academy, we are more and more impressed by the amount of interest received from students all over the world and the incredible level of the talent attracted.

“Students have seen the accomplishments of our former academy graduates, who have forged successful careers in both automotive and motorsport, and, as a result, more students than ever before want to participate to get this once-in-a-lifetime engineering experience to launch their careers.” 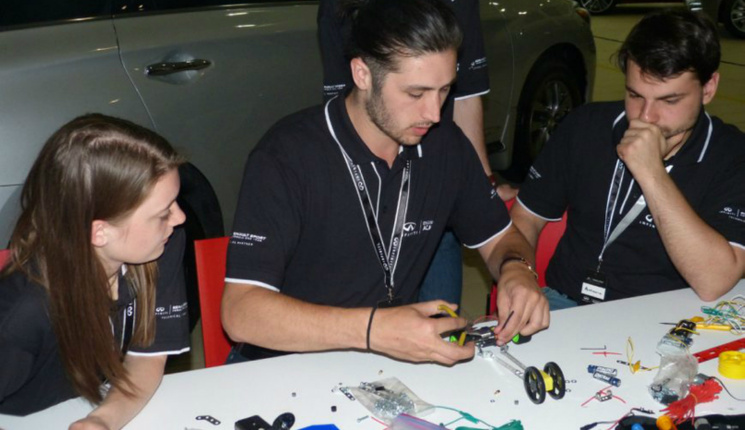 This was the fourth year of the competition and the second time it has been held for Canadian students. Total applications worldwide this year were about 12,000, nearly triple that of last year.

Engineering students who love racing — i.e., most of them, and all of the Canadian group — know how difficult it is to attract the attention of a Formula One team; this event gives them a better chance.

Competitions are held in seven geographical regions — Canada (which was the first event held this year), Asia-Pacific, China, Europe (including Russia), Mexico, the United Arab Emirates, and the U.S.

Added Lester, “Infiniti is committed to enhancing the ownership experience through high-performance lessons learned in motorsport. Programs like the Infiniti Engineering Academy help us realize that vision.

“We’re also happy to have Félix Lamy, winner of the 2016 Canadian Infiniti Engineering Academy competition, join us from his internship in Europe, to help encourage this year’s finalists in their journey to the most coveted internship in motorsport.”

Lamy, from Gatineau, Que., gave the students the lowdown on what to expect. He stressed that the winners are thrown right into the deep end of the pool; there are no “make-work” projects here.

He has travelled extensively to various Infiniti locations around the world and has spoken to groups about his experience. I was very impressed with him last year (he was an easy Number One on my score card) but also by how much more confident and self-assured he is after his year in the real world.

Lamy will come back to Canada to complete his engineering program — he has finished just two years — but has hopes of returning to Formula One upon graduation.

Matthew Crossan, quite rightly, can scarcely believe his good luck.