Oil's Well: Understanding What the New GF-6 Oil Means for You

Last May, ILSAC made official a new GF-6 standard, and without getting into specific additives and chemical specifications and testing, these are the important bits for you to know.

There’s a new oil standard in town, and while you might not care what the difference is between 5W30 and 0W20, let alone the difference between GF-5 and GF-6, this change in the oil standards matter. Why? Because they let automakers push the performance and fuel economy envelope further than before, while continuing to minimize wear and protect the most important (and expensive) parts of your car or truck.

So, here’s what you need to know about the oil changes and how it affects you on your next oil changes, because oil has come a long way since grabbing the first bottle on the shelf.

The International Lubricant Specification Advisory Committee (ILSAC) doesn’t have the most glamourous name, but they’re the group that sets performance standards for motor oil used in gas-powered cars and light trucks. When oils need to do new things and protect in new ways, this group agrees on the standards around that need.

Last May, ILSAC made official a new GF-6 standard, and without getting into specific additives and chemical specifications and testing, these are the important bits for you to know. The new oil standard allows for thinner oils to reduce friction and increase fuel economy, to better protect against wear in a stop-start-equipped engine, to better protect timing chains, and to help protect against low-speed pre-ignition (LSPI).

The first few of those changes aren’t overly complicated, the new oils let automakers make changes that save you at the pump while better protecting your engine. LSPI, though, is a problem that can happen in modern turbo engines and means when the fuel ignites too soon. That’s bad, because the explosion in your engine happens at a very bad time. It can damage your engine, and preventing it helps automakers tune the engine for greater efficiency.

You may already have seen an engine asking for the new oil. Toyota and Honda already have vehicles requiring extra-thin 0W16 (that’s viscosity, a measure of how thick or thin an oil is), and 0W8 is soon on the way. Because 0W16 is such a departure from conventional motor oil, the GF-6 standard is split in two, GF-6A and GF-6B. 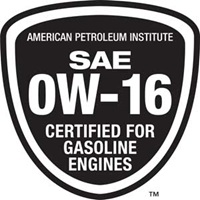 A is for existing cars, all the way down to 0W20. It’s backward-compatible, so it will offer some of the new standard’s benefits, but it will work fine in cars designed to the older standards.

B is the new one, for 0W16 oil only, and it’s not backward compatible.

So, what does this mean for you?

Even if you don’t do your own oil changes, all this matters. Because there are now more and more engine oil standards than ever before, and because many garages like to have just a few tanks of common oil, you should ask if your shop of choice has the right oil for your vehicle. A look at the oil cap under your hood (or failing that your vehicle’s manual) should tell you what you need. For example, take a look at a Honda manual from the late 2000s and it will tell the vehicle owner to use an oil with an American Petroleum Institute Starburst symbol. That advice still applies today, and oils meeting ILSAC GF-6A will wear that logo. 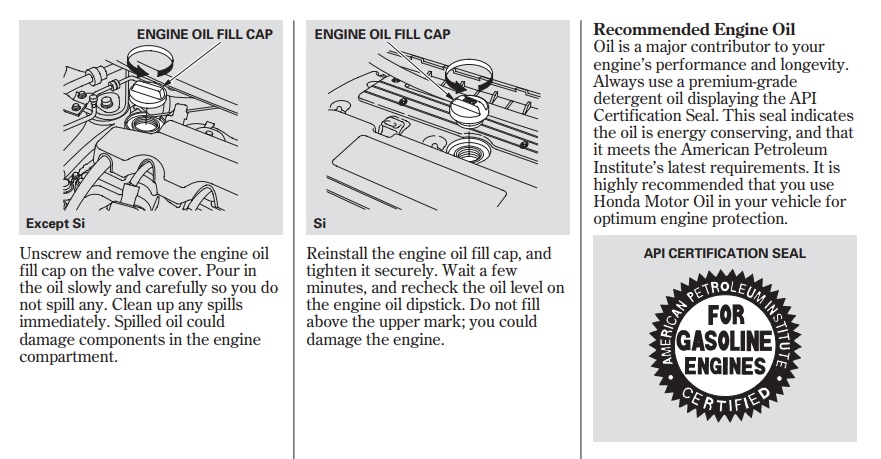 If your car needs GF-6B oil, like some very recent models including some Toyota Hybrids, a new mark is just coming into use. It’s a shield, instead of a starburst, with the oil grade in a large font. This oil isn’t all that common yet, (and the shield should start showing up later this summer on packaging) so it may be easier to find that oil at your dealer.

If your car asks for a different standard (we understand, motor oil specs can be like falling into a wormhole), like GM’s Dexos, then look for an oil with that logo on the bottle (often on the back). Yes, some bottles will have more than one logo, and that’s just fine. As long as they have the one you need.

What happens if you or your shop can’t find the right oil? Again, check your manual. The manual will tell you if you should avoid the wrong stuff completely, what are acceptable alternatives, and will probably say to use the next closest grade at the next service interval. You might notice some performance differences until you’re back to the right stuff. Use the wrong one outside of what the manual permits, and you could be on the hook – literally and financially – if the engine is damaged since that wrong oil could impact your warranty.

We’d suggest talking to your garage in advance to make sure that if they don’t have the right oil they can order it, saving you the worry. Don’t, however, use one of the new 0W16 oils in your older car in hopes of saving some fuel, unless the manual tells you that’s ok.

Sometimes even the most basic parts of a system need an update because they’re more important than they seem. That’s the case for the latest oil updates from ILSAC, letting automakers deliver more efficiency, more life, and a better experience. So, follow their directions and use what the book tells you.