NYC is the Perfect Setting for an Auto Show

City of contrasts rolls out the red carpet for major manufacturers.

NEW YORK- The city so nice they named it twice.

Most cars here seem to be hybrid taxis.

Next up, hybrid police cars.

All getting approximately zero miles per gallon as they slog through the worst traffic imaginable.

A city of contrasts then; what a perfect setting for a car show!

Ironically, most carmakers were talking fuel economy, when obviously few New Yorkers care, at least when it comes to vehicles they buy for themselves.

But here is what struck our eye.

First, a caveat. The New York Auto Show has two press days, always the Wednesday and Thursday before Good Friday. Due to our production scheduling constraints, we can only cover the first day for this week’s Wheels section. But with a few exceptions, which we’ll cover next week, most of the big news happened on Wednesday.

Such as it was. There weren’t too many true global novelties here, a common problem for New York since Geneva’s show was just a few weeks ago

One of the few world debuts came courtesy of Jaguar Land Rover. The Range Rover Velar is the third vehicle off the Range Rover platform. Norris McDonald has more on this car and some interviews with the people behind it elsewhere in Wheels today.

Subaru showed a “concept car” called Ascent which will become its biggest SUV in early 2018. We put “concept car” in quotes because this is very close to the real thing.

Ascent is a three-row vehicle, bigger that any existing Subaru, but reminiscent of the ill-fated Tribeca, of which the less said, the better.

Subaru hasn’t made too many wrong moves since — well, since the Tribeca. But big SUVs seem all the rage now, so let’s hope for their sake, they have better luck with this one. 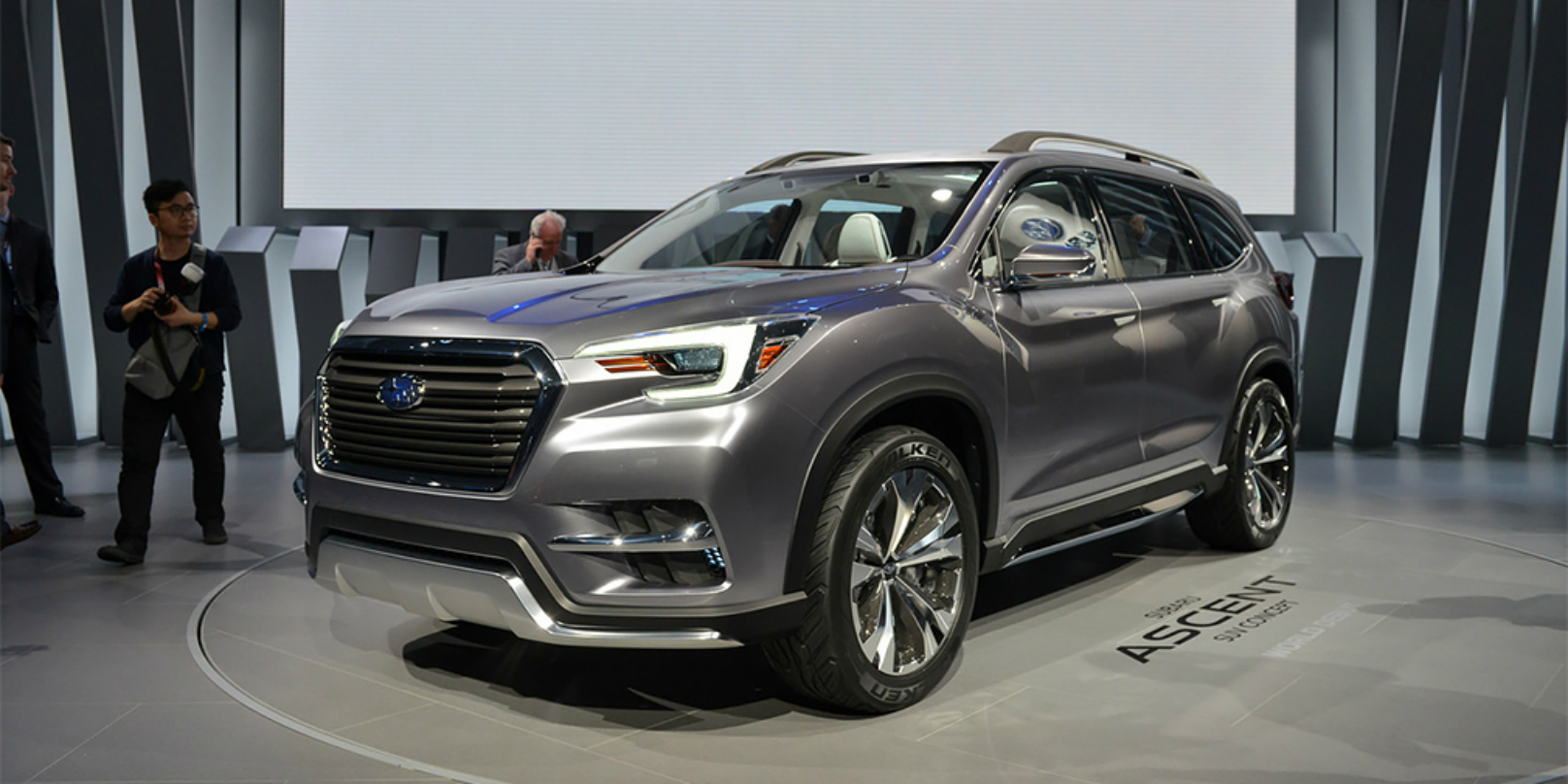 This car, oddly enough, was one of the “concept car” stars of last year’s show, with its zany and too-cool-to-be-true massive gullwing doors.

Sadly, but predictably, they didn’t make it to production.

The only engine at the moment anyway is a turbo 3.5-litre V6, whose 450 horsepower outdoes archrival Cadillac Escalade.

The biggest Lincoln is all about sound — the near-absence of it, thanks to active noise cancellation, acoustic glass, and much of the sound-deadening techniques introduced in last year’s Continental; and the presence of it, via a 20-speaker Revel Utlima audio system.

The Conti and now the Navigator indicate that Lincoln, for several years on its back foot, is about to take Cadillac on for supremacy in the American luxury car battlefield. 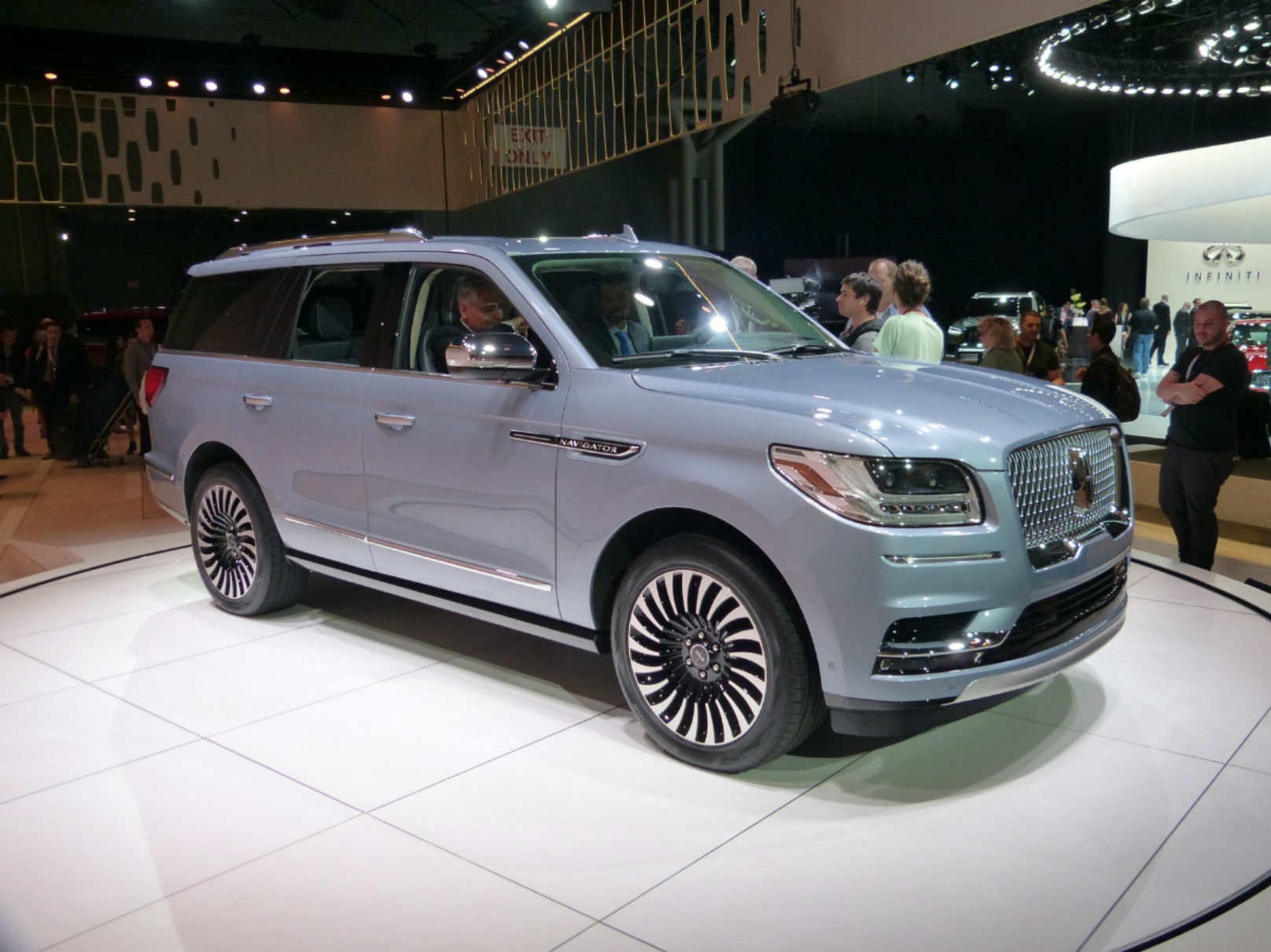 Hyundai announced a “concept” — there’s that word again — of a fuel-cell-powered SUV for its upscale Genesis brand, dubbed GV80. The car looks more than ready for production, but the guess is it will be launched with the same powertrains as the G80 sedan, a 3.8-litre, 311-horsepower V6 and 420-horsepower, 5.0-litre V8 engines, with optional four-wheel drive. Hyundai has hinted at a production fuel-cell vehicle as early as 2020, and the G80 might well be the first one of its kind. 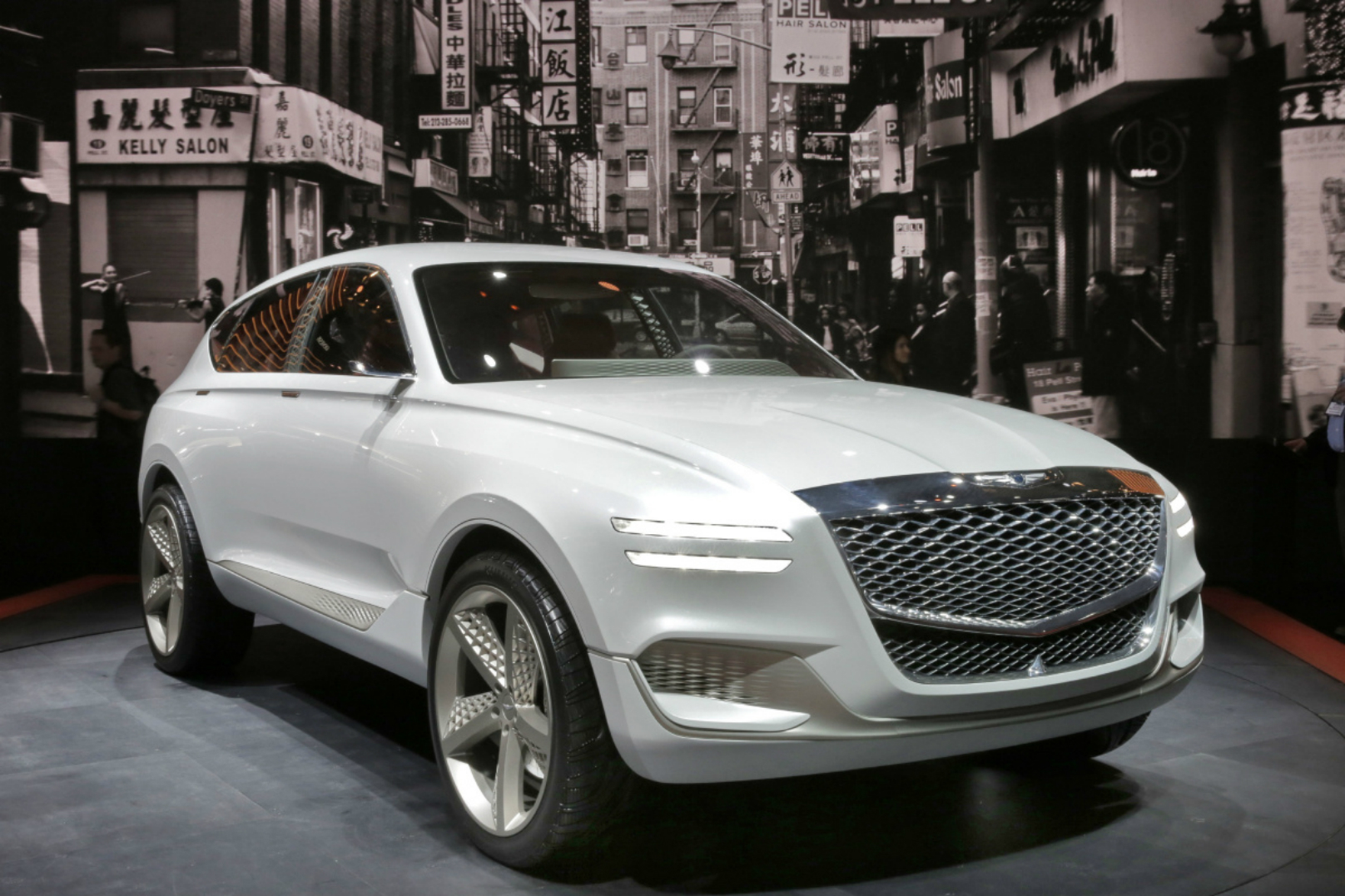 Honda expanded its Clarity range, adding a pure electric model with a range of just 128 kilometres (which, of course, assumes nice, warm weather, no rain, no hills, all the usual issues with battery-powered cars), and a gasoline-electric hybrid which can do considerably better, with up to 67 km of battery range (with the same above caveats) from its electric motor, mated to a 1.5-litre, four-cylinder gasoline engine running under the ‘Atkinson’ cycle, producing 181 horsepower. This gives the vehicle a total range of 530 km … i.e., about half that of my 14-year-old Volkswagen Jetta Diesel. Jes’ sayin’ …

The Clarity fuel-cell vehicle is available only in California; a shame, because it is the only one of the three that has any hope of being a significant part of our longer-term future. 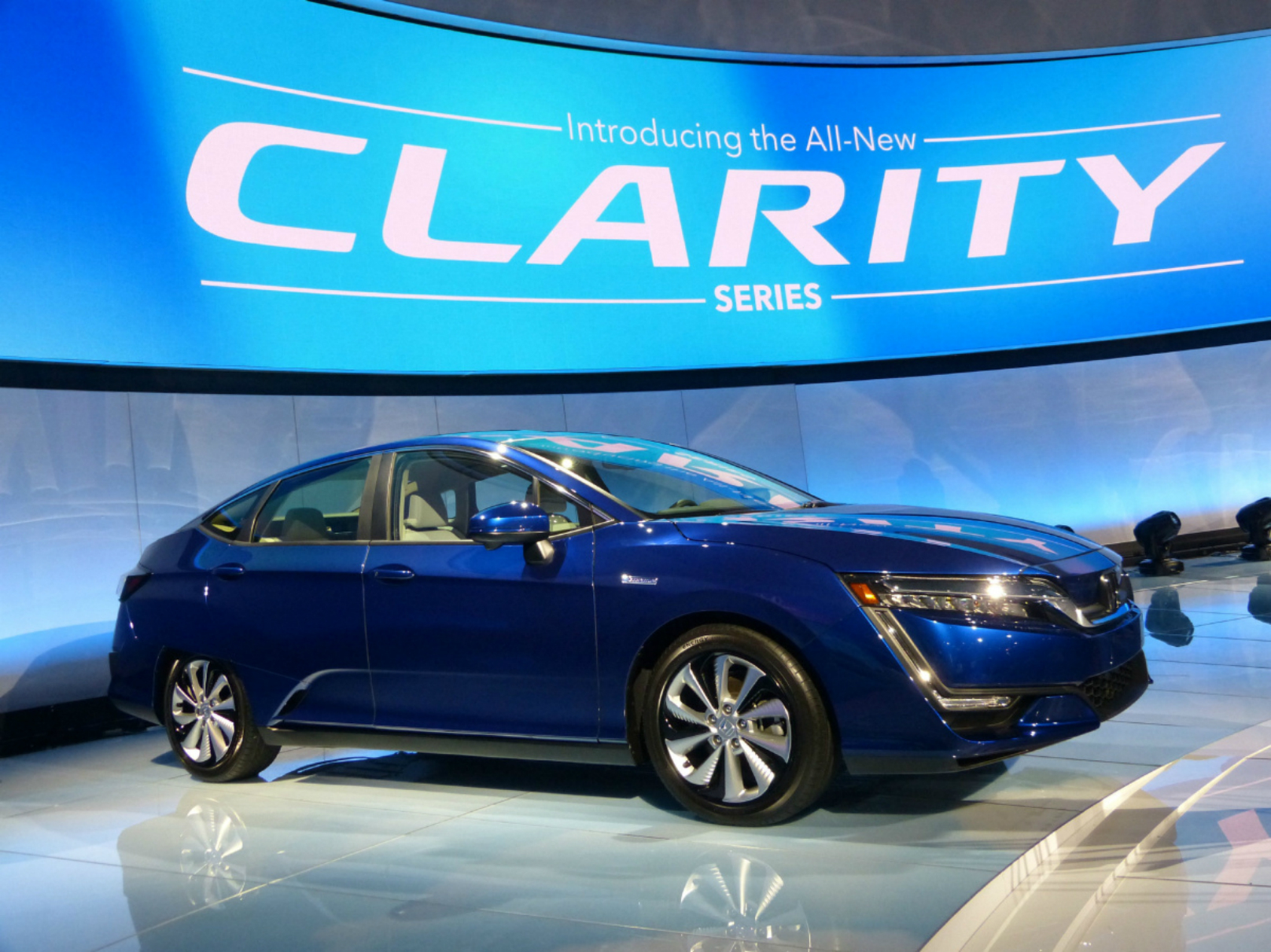 Jeep resurrected an old tradition of off-the-wall auto show previews (e.g., driving a vehicle through a plate-glass window at Detroit some years ago) by driving the new Trailhawk version of the Grand Cherokee down a flight of stairs.

While this vehicle might have to cede ultimate off-roading capability to its Wrangler sibling, it clearly will go places no self-respecting big SUV owner would ever even think about trying to negotiate.

But for Jeep, being able to do it is a huge part of the brand image, even if as an owner you may never have to prove it. 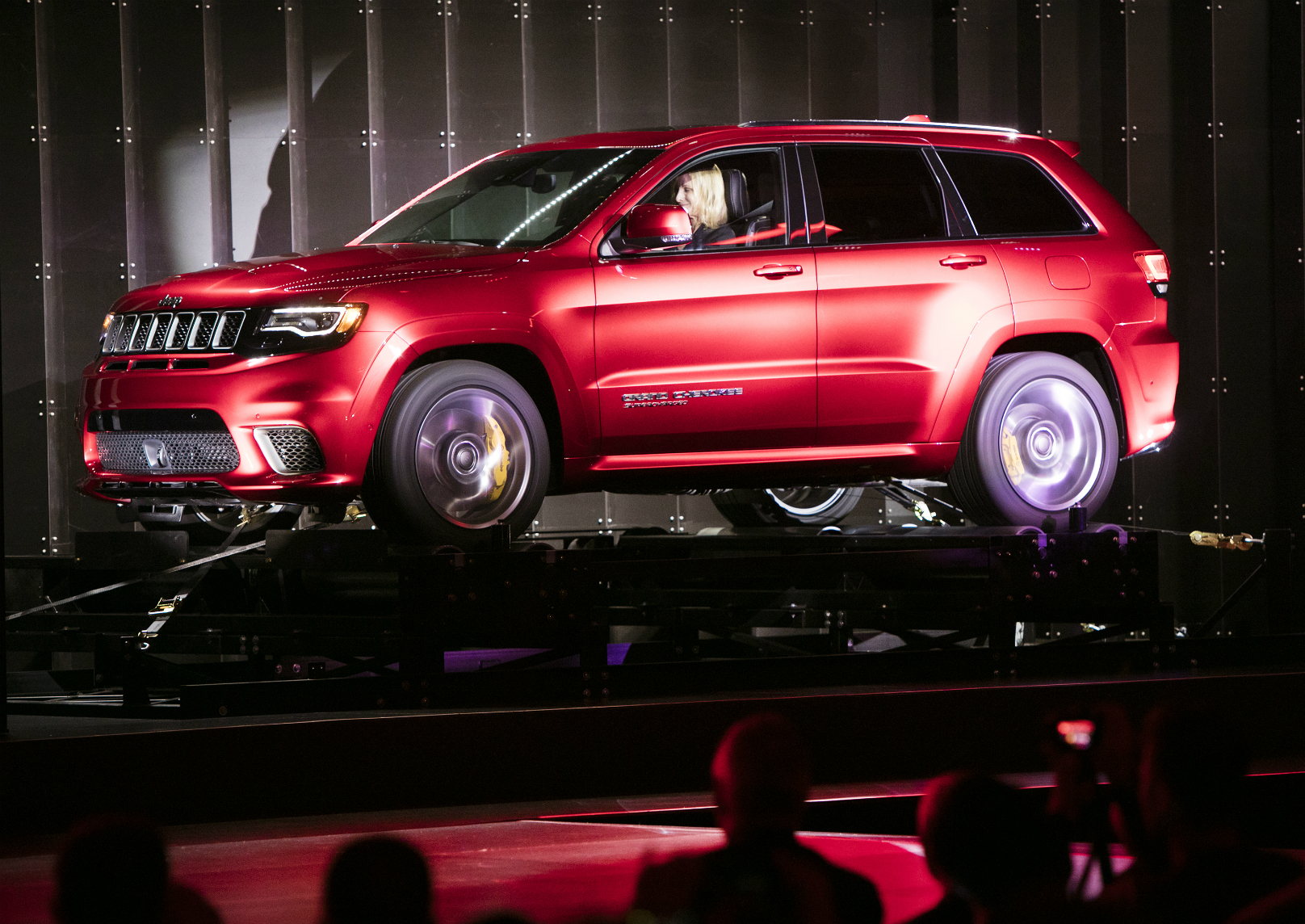 You might think that a vehicle its maker calls “the fastest production car in the world” might have been deemed worthy of a press conference of its own at New York.

Nope; the Dodge Challenger SRT Demon, the subject of a months-long social media campaign, was just sort of there on Press Day.

If someone had fired it up, it wouldn’t have been there for long. When filled with 100-octane racing fuel, the supercharged 6.2-litre V8 can shove 840 horsepower and 770 pound-feet of torque through the rear wheels, flinging the car from rest to 96 km/h in a stunning 2.3 seconds.

Launched correctly, this car can even get its front wheels nearly a metre off the ground.

Now, what was that about fuel economy? 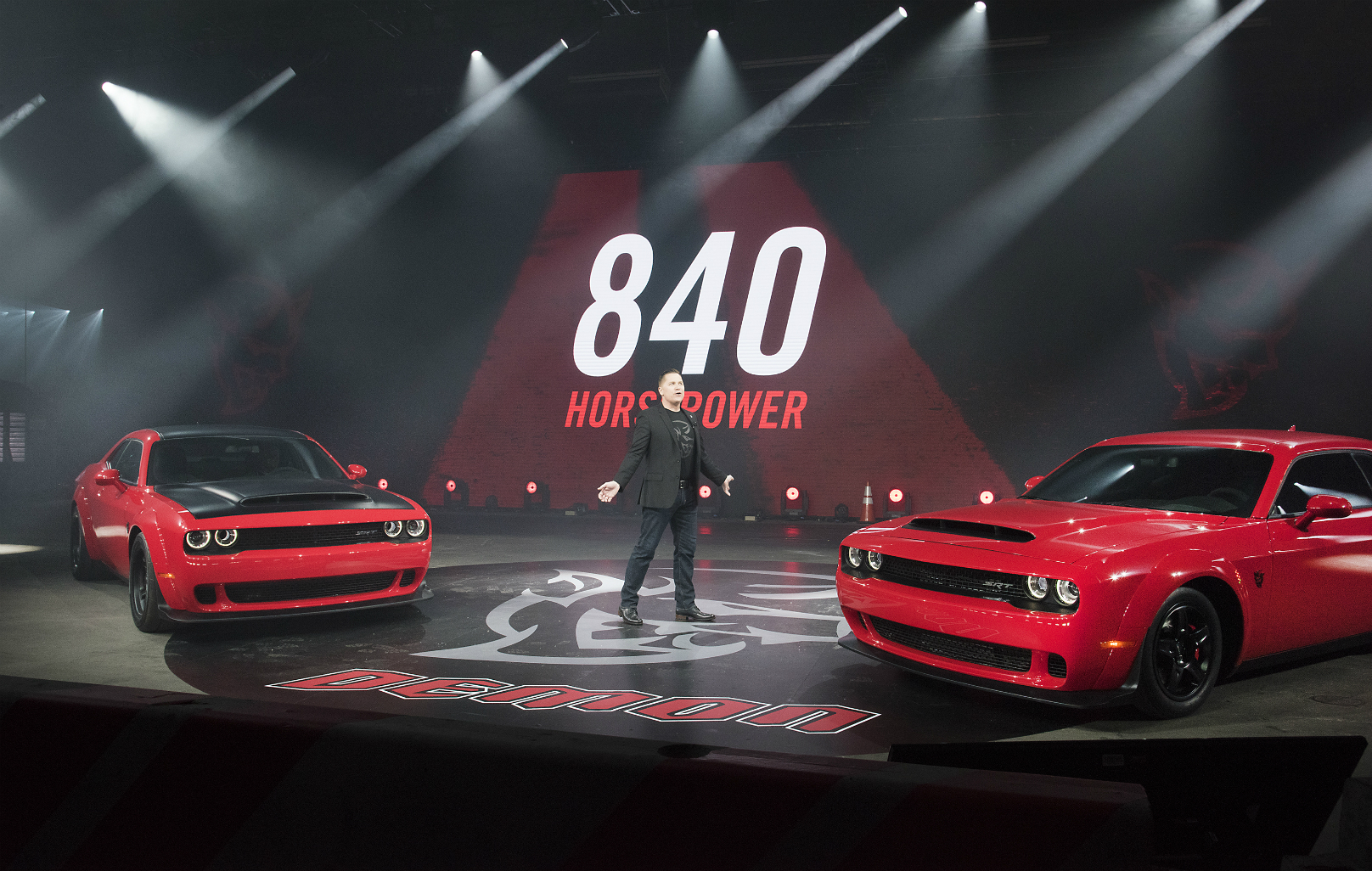