Hyundai Canada may not yet be ready to reveal a starting price for its upcoming all-electric compact Ioniq 5 crossover, despite its Victoria Day North American info drop, but it has dropped what is traditionally rare in the auto business: a different powertrain choice in Canada versus what’s available in the U.S.

In this case, Hyundai Canada will offer a smaller 58 kWh battery, for certain to offer a lower starting price in Canada than otherwise possible, but also likely pointing to another goal: reaching a sub-C$45,000 starting price, in order to make all (or most) Ioniq 5 models eligible for the $5,000 federal rebate by the time it arrives in November.

This has not been confirmed or even whispered by Hyundai Canada folks, either on or off the record. But the fact that the Ioniq 5’s upcoming BEV Volkswagen ID.4 rival will be eligible for this federal rebate (and various provincial rebates on top of those $5k), strongly suggests that Hyundai realizes the significant market pressure to introduce the base model and its 58 kWh battery as originally announced earlier this year that may (possibly) help it to meet this pricing goal, even if American Hyundai marketing execs have decided to only offer the larger 77.4 kWh battery, at least at launch this fall.

What makes the Ioniq 5 most unique however is its maximum 350 kW charging speed, provided you are at a DC quick charger that can charge that quickly, which is yet relatively rare but growing. This is essentially a sophisticated 800-volt system that is most often found in much pricier six-figure luxury EVs, but at the right charger on the road, can charge from 10 to 80 per cent in a blistering 18 minutes. And very few EV drivers quick charge past 80 per cent, because the speed of quick charging decreases rapidly around this point, and the growing EV infrastructure – and EV battery range of modern electric vehicles – means there’s often less need to ‘top up’ to reach your destination, or the next quick charger. 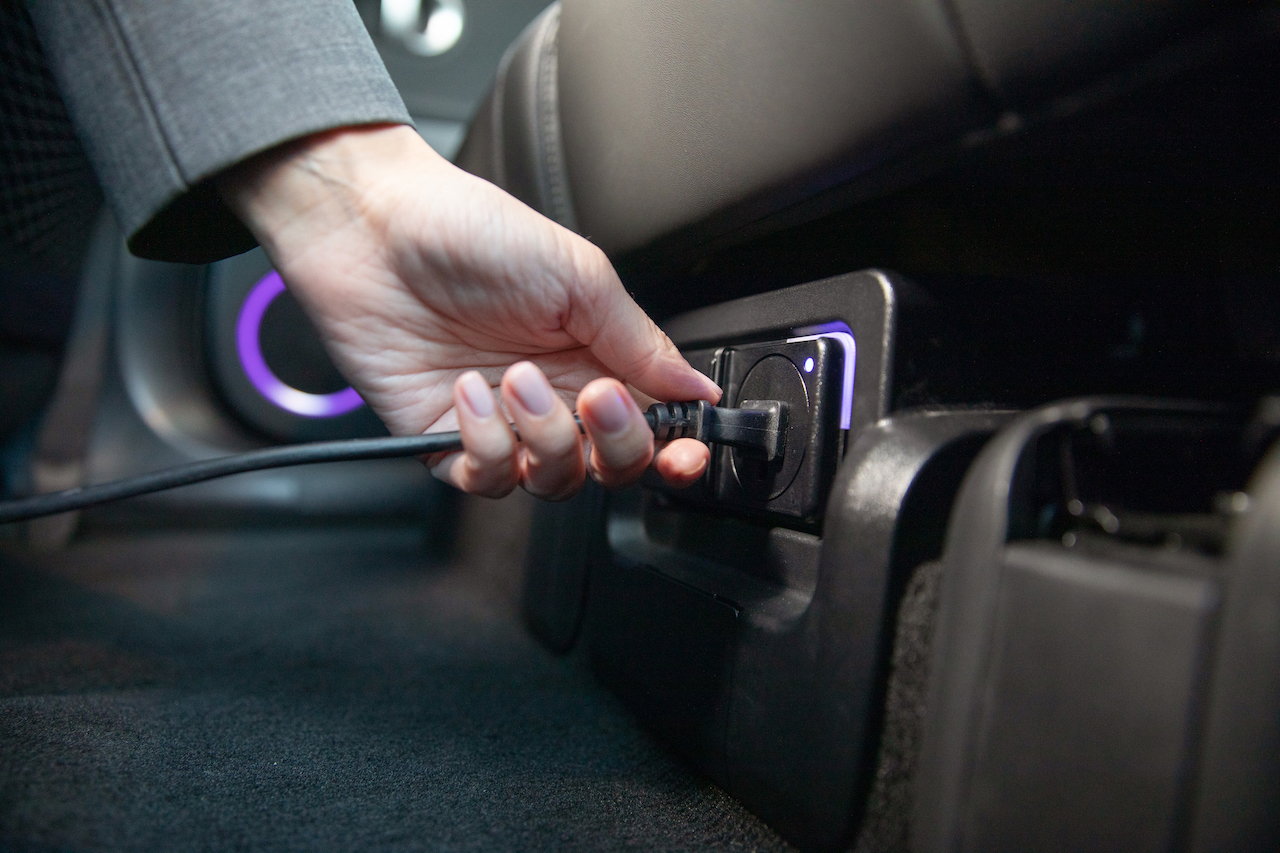 A gas-station-like five-minute stop in the Ioniq 5 at the right quick charger can yield 100 km in range, says Hyundai, or roughly a quarter ‘tank’ of charge. Even its Level II home charging is quick, thanks to its standard 10.9 kW onboard charger, with Hyundai suggesting that a full charge (presumably on the largest battery) will be possible in six hours and 43 minutes, though that will depend on your home charging station (EVSE technically) and its amperage and possibly weather conditions.

Other key features include an adapter that plugs directly into the rear passenger side charging port, allowing one to plug any device that used a three-prong cord into your car, and use it just like any 120-volt outlet at home. Fully loaded all-wheel drive Ioniq 5 models also offer a similar plug to charge laptops using a plug in the rear seat footwell area. It offers up to 1.9 kW of peak power, so it’s not going to back up your entire home, but could be a major benefit during camping or socially distanced outdoor get-togethers.

In Canada, the Ioniq 5’s base model with the 58 kWh standard range battery will offer two trim levels, Essential and Preferred, both of which will come with rear-wheel drive, and an estimated range of 354 kilometres. Both of these versions offer 225 hp and 258 lb-ft of torque, which is fairly healthy power for a compact crossover, with Hyundai estimating a mid-seven-second figure for the 0-100 km/h acceleration benchmark.

For those who want longer maximum range, more power, or a higher minimum range in cold winter temperatures, a larger 77.4 kWh battery is available, which provides up to a predicted 480 km of range, in the Preferred rear-wheel drive model. Adding all-wheel drive to this model cuts down range to 435 km with the Preferred package, and down to an estimated 400 km in the top-line LR AWD with the Ultimate Package, which is the quickest Ioniq 5 available, and can go from rest to 100 km/h in less than five seconds. 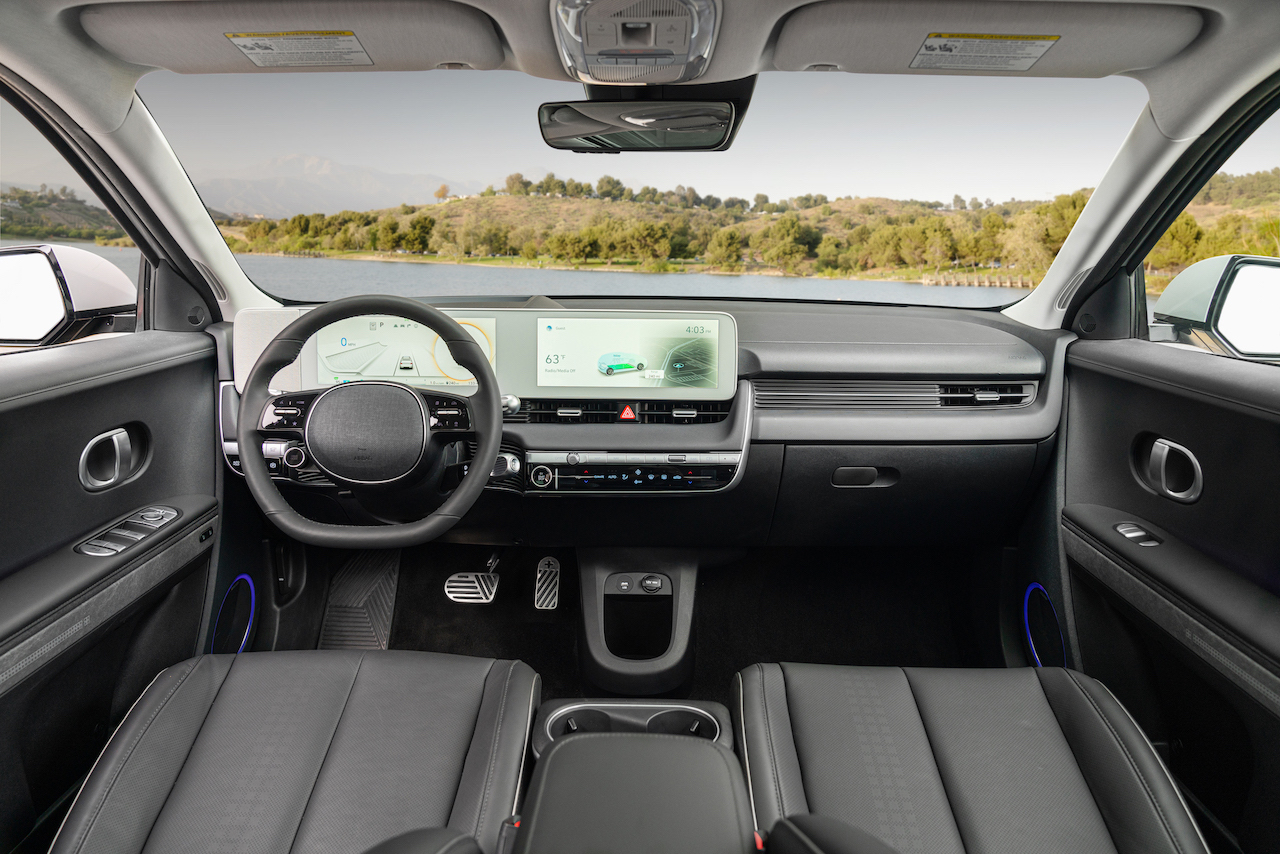 The lowest-range model in the U.S. is ironically the highest trim Limited AWD model, which offers 244 miles of range, or 393 km.

The Ioniq 5 will be the first in a range of all-electric Ioniq vehicles. A BEV Ioniq 6 sedan will be next, followed by the Ioniq 7, a large electric SUV.