The Nissan Rogue Warrior was tested in complete secrecy two weeks prior to this week’s Montreal Auto Show where it was planned to be the super surprise of the day.

It was introduced to the world on Jan. 14 at the Montreal Auto Show.

Instead of four wheels, it has four tracks that can propel it through almost any winter condition you can think of from knee-high snow to sheet ice and up to 100 km/h on the flat.

The Rogue Warrior started as an idea of Nissan Canadian head of PR, Didier Marsaud, who was looking for a way to build on the brand’s current Nissan “Conquer All Conditions” media campaign, with one ad featuring the Rogue snatching people way from hoards of menacing snowmen.

He then turned to Carl Hermez of Montreal’s Motorsports in Action (MiA), who fabricates all the cars used in the super successful Nissan Micro Cup, that now has grown to 10 venues for this year.

Hermez said, “it’s the kind of challenge I like.” He found there is a firm in the U.S., American Track Truck, that makes triangularly shaped tracks that fit to the hub of almost any vehicle. 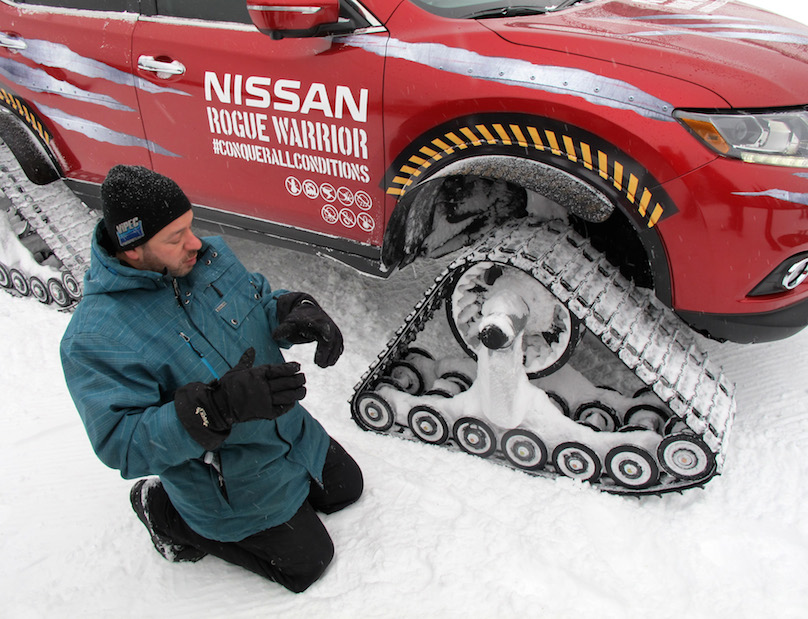 Each track is 21-in tall, 48-in long and 15-in wide. Taking off the wheels and putting on the tracks takes about one hour.

The Rogue is completely stock from the 2.5-litre engine to the suspension and the CVT transmission.

The only change was a switch to two-inch taller shocks so the tracks could clear the bottom of each wheel well. The only modification was snow guards and minor lower body trimming to clear the tracks.

“The biggest surprise to me was the CVT,” Hermez said. “I’m not a big fan of CVTs, but after this, I’m sold.”

Because Nissan’s Xtronic CVT has no fixed gears, it tends to be in the right ratio at the right time and can adjust to conditions 30 times faster than a blink of an eye. 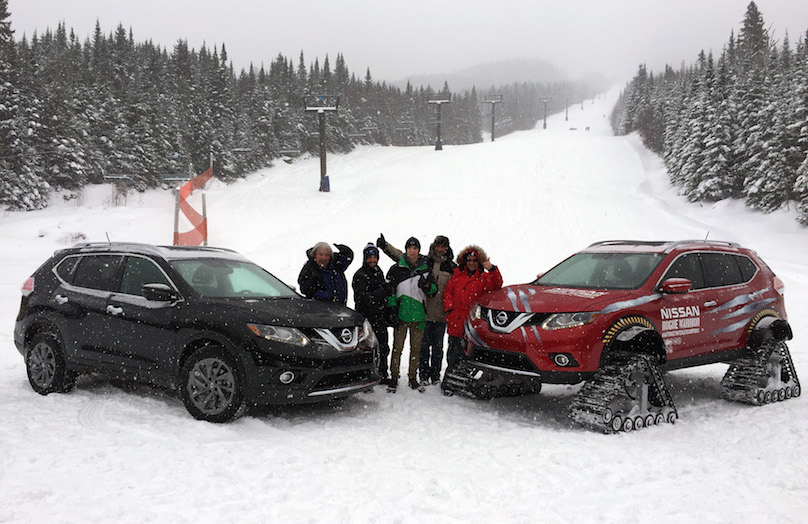 The Rogue Warrior was tested in complete secrecy two weeks prior to this week’s Montreal Auto Show where it was planned to be the super surprise of the day.

Nissan rented one side of a ski hill north and east of Saguenay for testing, complete with spotters on the ridges to make sure no spy photos were taken.

The first run was made by Oliver Bedard, this year’s Nissan Micra Cup champion. 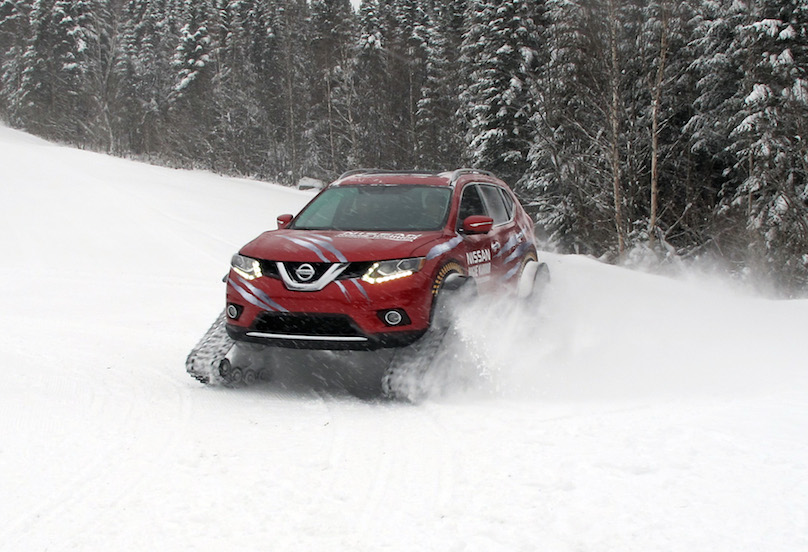 He roared up what I think was a 30 percent grade on the ski hill with snow billowing out of the wheel wells with zero problems. In fact, I was told the Rogue Warrior can tackle grades up to 45 per cent – believe it or not.

Then it was my turn – and I couldn’t wait

Friends, I’ve been testing vehicles for decades, but there has never been something as unique as this – or as much fun.

Getting into the Warrior is like getting into any stock Rogue compact CUV, as the instruments, gauges and controls are in the same place. There are no special knobs or levers.

Put the Warrior in Drive and off you go. 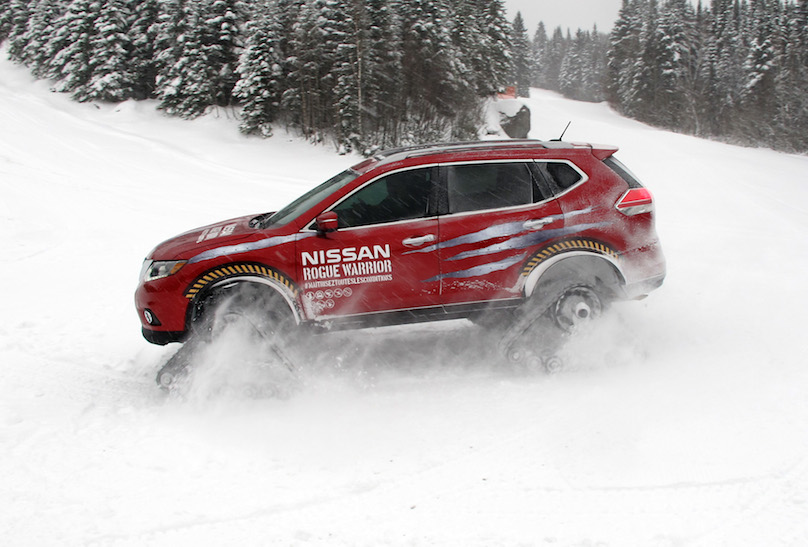 Once the cleats of the tracks bite, the Warrior steams off, but not with a lurch as I expected.

Steering is surprisingly light and turning, while slow, was still easy to predict with loads of “feel” coming through the steering wheel.

With three others on board, the weight did not seem to matter to our forward progress.

Uphill, downhill through 30 cm of powder snow – I was unstoppable.

What impressed me the most was the CVT that stayed around 3,000 rpm whether on full throttle, going uphill or turning.

When I got out, I couldn’t stop laughing. I even hugged Hermez.

The Nissan Rogue Warrior is not going into production, which I can understand.

But if the Polar Vortex ever threatens me again, I’ll make sure to have a Nissan Rogue Warrior in my driveway. 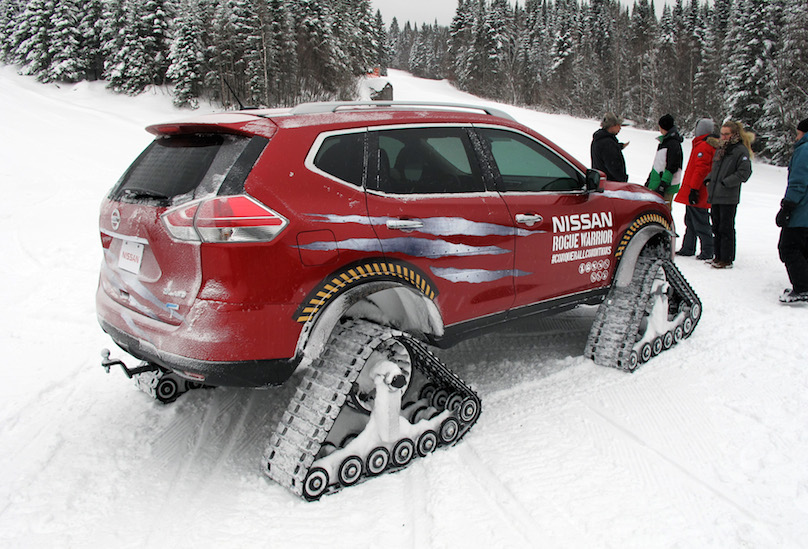