Hybrid technology derived from Formula 1 is a step toward AMG’s electrification.

Pour one out for the AMG V8s — or the ones in C-Class sedans, at least.

The high-performance version of the fifth-generation C-Class, the Mercedes-AMG C 63 S E Performance, won’t be sold with a V8. At all.

Instead, it’s getting a 2.0-litre turbocharged four-cylinder engine powering the front axle and a 150-kW electric motor at the rear. Mercedes reports the engine produces 469 horsepower on its own, making it the most powerful four-cylinder engine in the world. Total combined system output is 671 horsepower and 752 pound-feet of torque, a significant jump from the 503 hp and 516 lb-ft churned out by the previous-generation C 63 S.

But here’s where things get interesting. You know how everyone says there’s no technology transfer from motorsport anymore? Mercedes begs to differ: using a battery technology lifted straight out of the automaker’s Formula 1 drivetrain, the cells in the new C 63 S’s 6.1-kWh battery are individually cooled. Mercedes says this allows the battery to maintain power output from the electric motor at a steady 70 kW, meaning that the battery will never fully drain in standard operation, even if the plug-in hybrid powertrain hasn’t been charged.

You can charge it, and you’ll get 13 kilometres of fully electric range if you do. But range and efficiency are not the goals here. Instead, this technology is deployed to improve outright driving performance.

But wait, there’s more! An electrically assisted turbocharger — also lifted straight from Formula 1 — spools up the turbo more quickly, which Mercedes says eliminates turbo lag outright. All of the power from both the engine and the electric motor can be distributed to either rear wheel or the front axle independently through the standard mechanical all-wheel drive and rear limited-slip differential. And the longitudinally mounted engine in the front, combined with the rear placement for the electric motor and battery, balance the car with a 48:52 weight distribution. 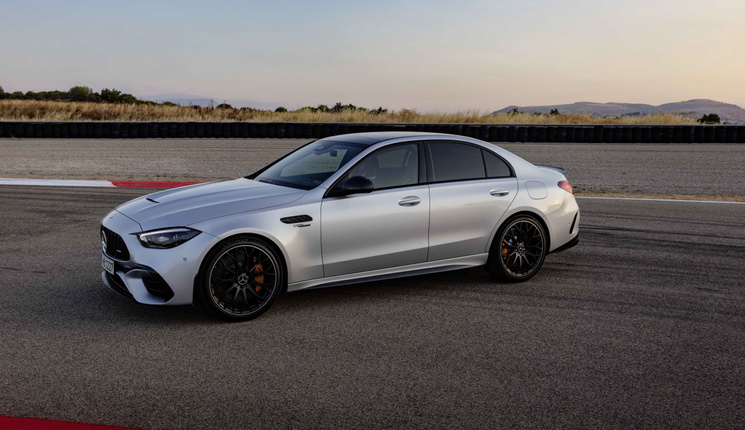 On the practical and visual side, the new C 63 S is longer and wider than the current C-Class by 83 and 76 millimetres respectively. A new air outlet is placed at the centre of the hood, flanked by a pair of power domes. And a round badge with a black AMG emblem replaces the Mercedes star and laurel logo on the hood, a first for a production AMG.

Now, here’s the not-so-great news: all that new equipment is heavy, topping out the C 63 S E Performance’s curb weight at 2,111 kilograms (4,654 pounds), though Mercedes plans to make rear-axle steering standard in all markets to help with the car’s handling agility. 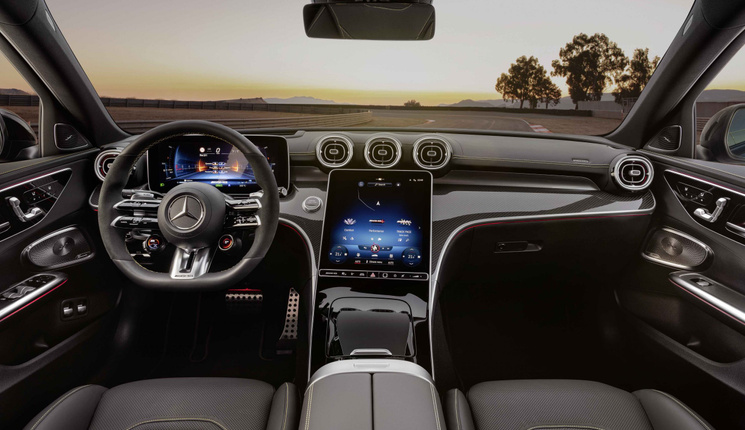 The other issue, potentially, is the sound. A microphone will pump exhaust noise into the cabin, but this can’t hope to replace the rumble of a V8. If these performance claims bear out — and it would be surprising if they didn’t — the new C 63 S E Performance will be the most outright capable version of this car ever built. Still, it can’t be denied that many people buy AMG cars for the engine note, at least in part.

Philipp Schiemer, CEO of Mercedes-AMG, confirmed in a preview media roundtable that while the company’s long-term goal is electrification, there is still a strong customer base for internal combustion engines and Mercedes will continue to offer them for the foreseeable future. 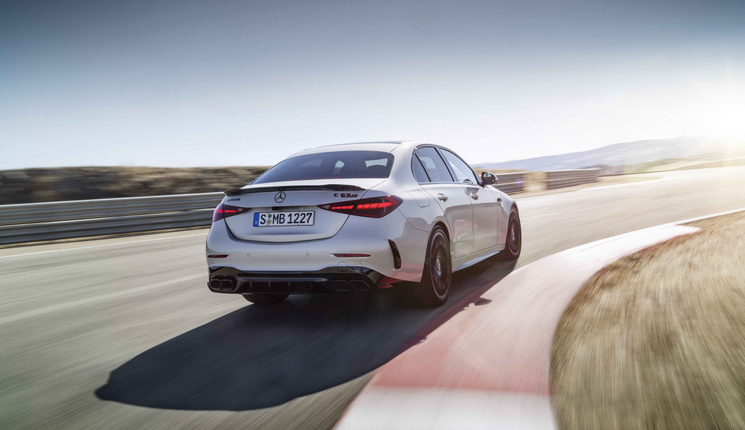 “We will offer normal combustion engines as long as there is a demand,” Schiemer says. “We understand that our engines will be probably the last one to be sold because we have a lot of fans for today's combustion engines, and we still see there a market for a long time.”

On the other hand, Schiemer says a segment of AMG customers also already own electric vehicles and won’t be turned off by a hybrid powertrain.

“Younger customers, customers coming from the tech side, they have appreciation for electrification,” he says. “There's a different kind of target group (than V8 buyers). It's not the same which we want to attract with electrification. I think that the hybrid technology is a bridge going into real electric.”

More information, including full specifications and Canadian pricing, will be made available as the car comes closer to its on-sale date early in 2023.