This week in the news, Ford shakes up the Ranger, Volvo gets rid of the nitty-gritty, Mazda goes big engine small car, Volkswagen is taking a detour to New Mexico, Jaguar has upped the F-Pace inside and out, and the GMC Hummer has crab(walk).

Volvo announced a new cabin filtration system coming to vehicles that can filter up to 95 per cent of particles from the air. It’s called Advanced Air Cleaner and it has a sensor that measures PM2.5 levels. That describes incredibly fine particles in the air, which the WHO says aren’t good for you. A new filter combined with ionisation can reduce these particles up to 95 per cent, and the vehicle will tell you what the current in-vehicle level is. “With our Advanced Air Cleaner technology, you can rest assured that the air you breathe inside your Volvo is cleaner and healthier,” said Anders Löfvendahl, senior technical expert on cabin air quality at Volvo Cars. Owners will be able to use the Volvo On Call app to clean their cabin before they get in. It will be offered on all 2021 models based on the SPA platform, including XC90 and all 60 series vehicles. 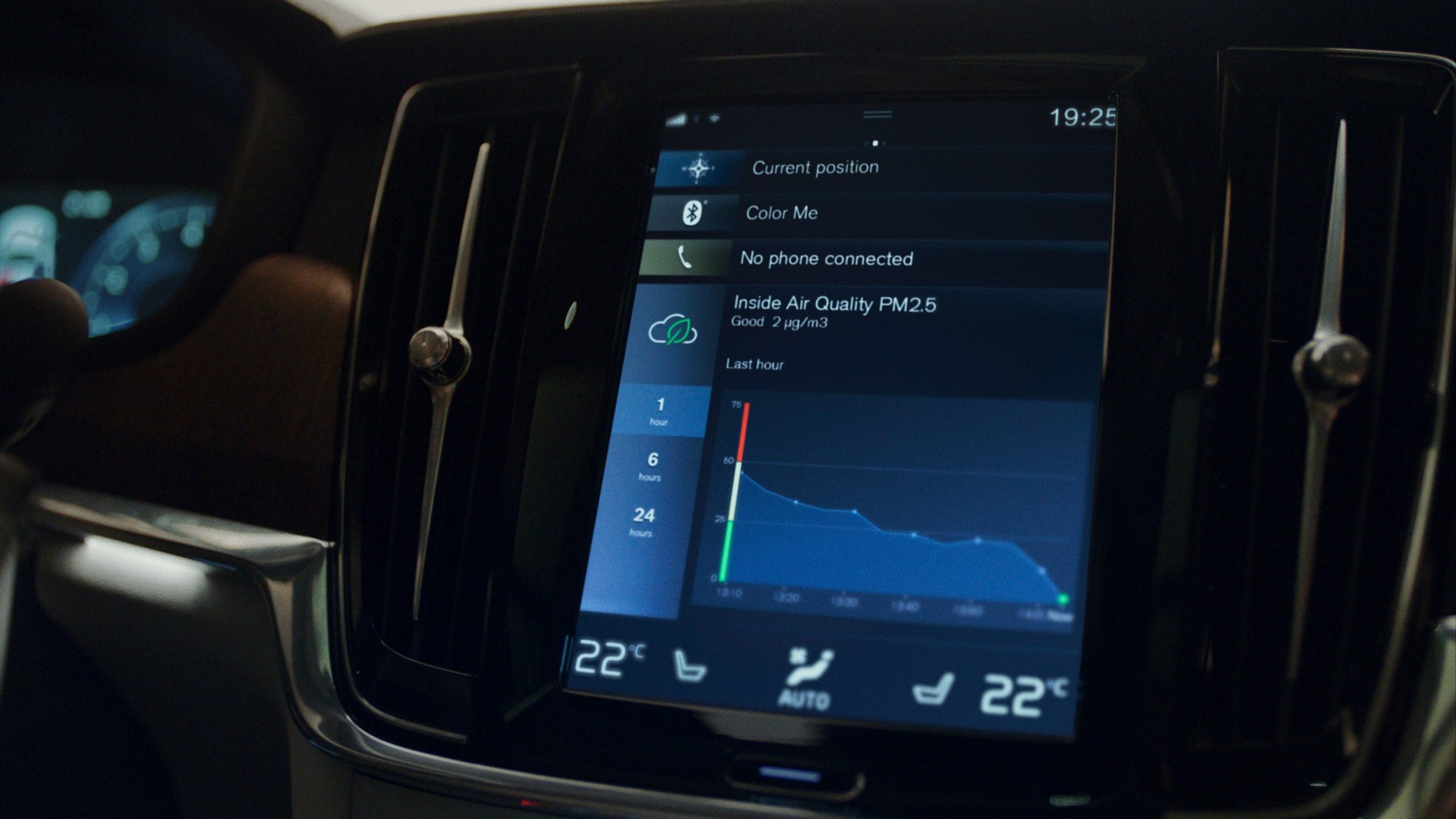 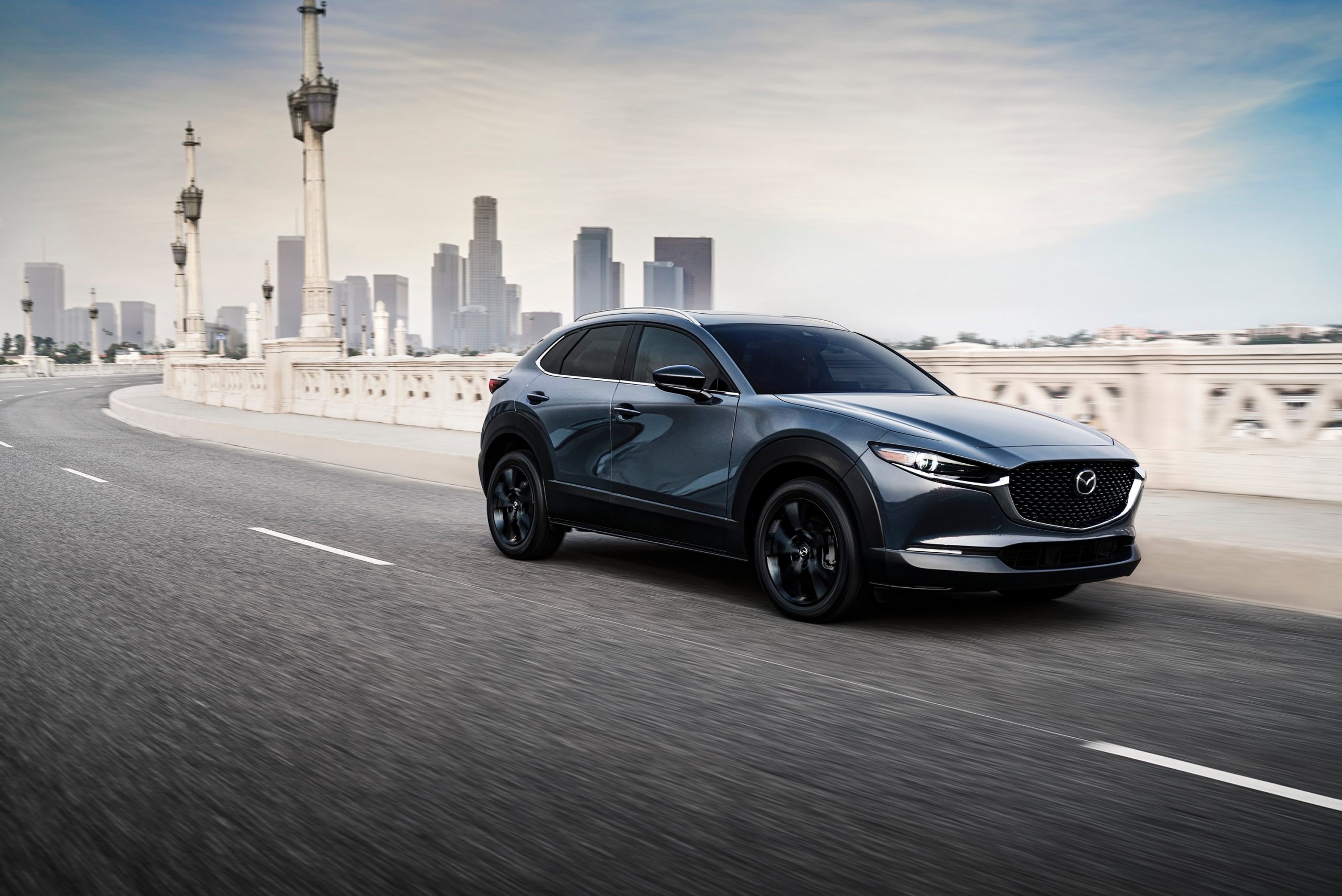 Ford is upgrading the Ranger for 2021 with a Tremor model. It’s not the Ranger Raptor many hoped for, but it does add some off-road capability to the compact pickup. Starting with Fox 2.0 dampers that have durability and control-enhancing remote reservoirs in the rear that are designed to better control the Ranger’s suspension when you’re off-road. There’s a mild lift and 32-inch General Grabber all-terrain tires, springs tuned for off-roading, an electronic rear diff, and there are six new auxiliary switches in the cabin. It has suede Tremor seat inserts, but sadly missing is a the Raptor-like F-O-R-D grille. The package adds $5,250 to a 2021 XLT or Lariat SuperCrew 4×4.

Volkswagen is planning a new crossover that it says was designed specifically for North America, and it’s going to be called Taos. Smaller than the Tiguan and set to be revealed October 13th, the Taos will probably be the replacement for the next-generation VW Golf that’s not coming here. Or, likely, that’s what VW hopes. Volkswagen calls it the “second proof point” in its strategy to double up on crossovers, the first being the Atlas Cross Sport launched earlier this year. 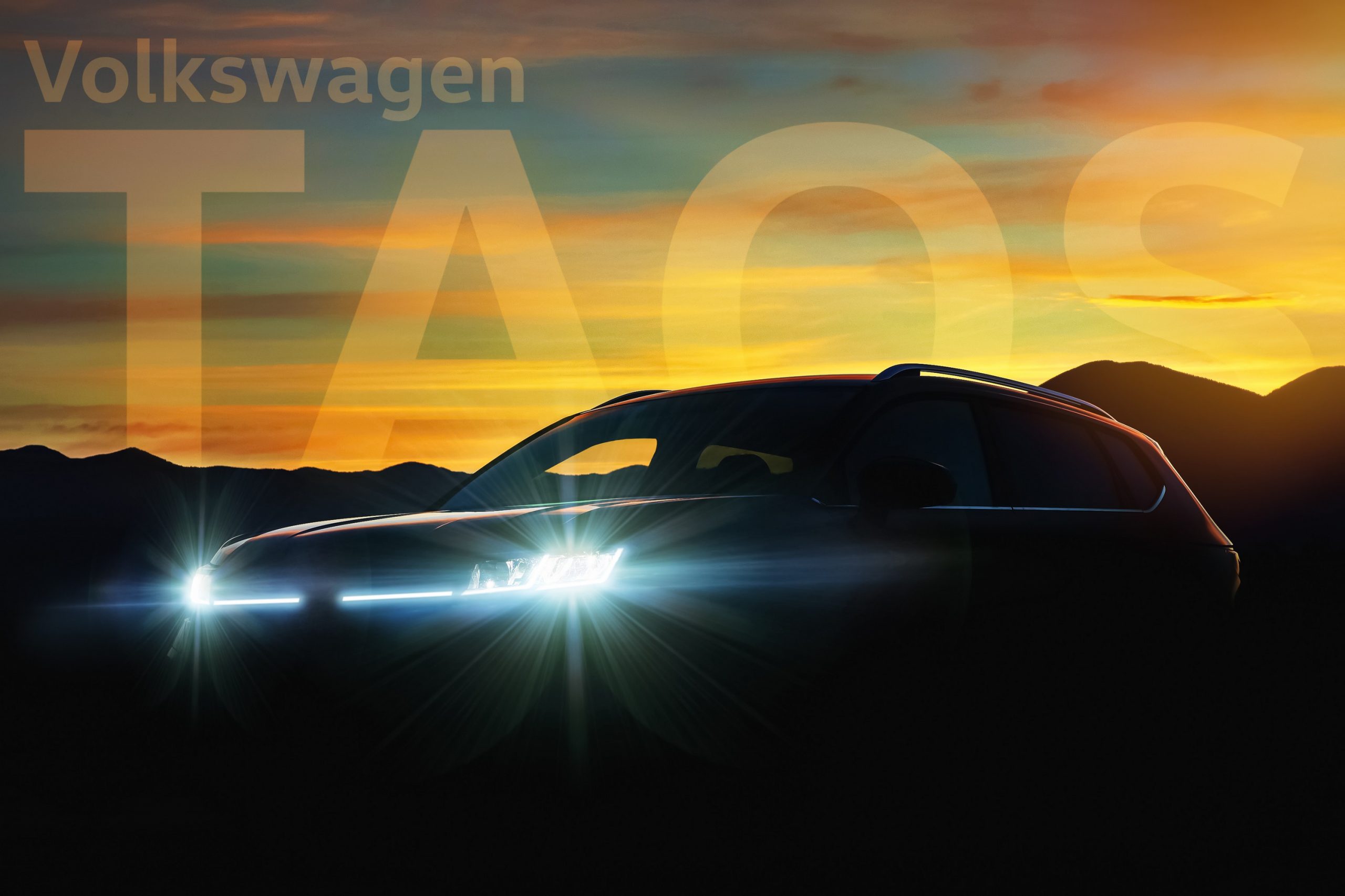 The Jaguar F-Pace gets a makeover for 2021, adding new tech like the automaker’s Pivi Pro infotainment system, more luxury details, and a very slight exterior refresh. Outside, the changes are taillights that look like those on the I-Pace and some slight massaging of the bumpers front and rear. Inside, though, there is an 11.4-inch floating screen and a 12.3-inch digital dash. More soft-touch materials and trim like open-pore wood as well as active noise cancellation add to the luxury experience inside the Jag. Two gas engines will be offered, both variations of the same 3.0L inline-six. One is a 335 hp model, the other a 395 hp. Both use 48V mild-hybrid tech and get an eight-speed with AWD. 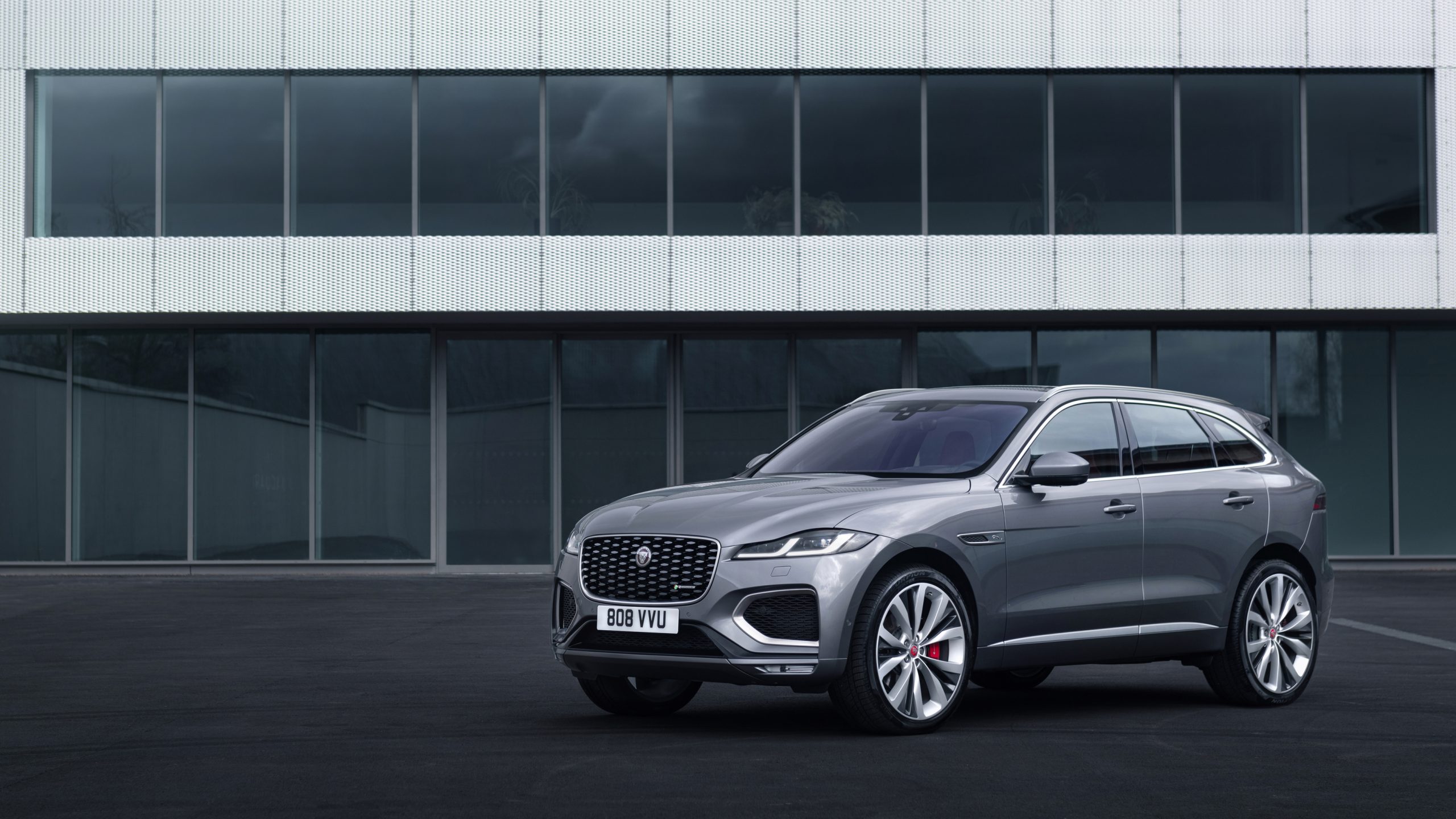 GMC announced a new Crabwalk mode for the upcoming Hummer EV. They’re not showing much about it, but the ad says, “sometimes the biggest leaps forward are diagonal.” It shows the two same-side wheels front and rear pointing in the same direction, then the vehicle driving ahead. Sideways, sort of like a crab. This could be useful for off-roading and scooting around obstacles, but could also be helpful when parking a Hummer EV, which we assume will be quite massive. The full Hummer EV will be revealed October 20th. 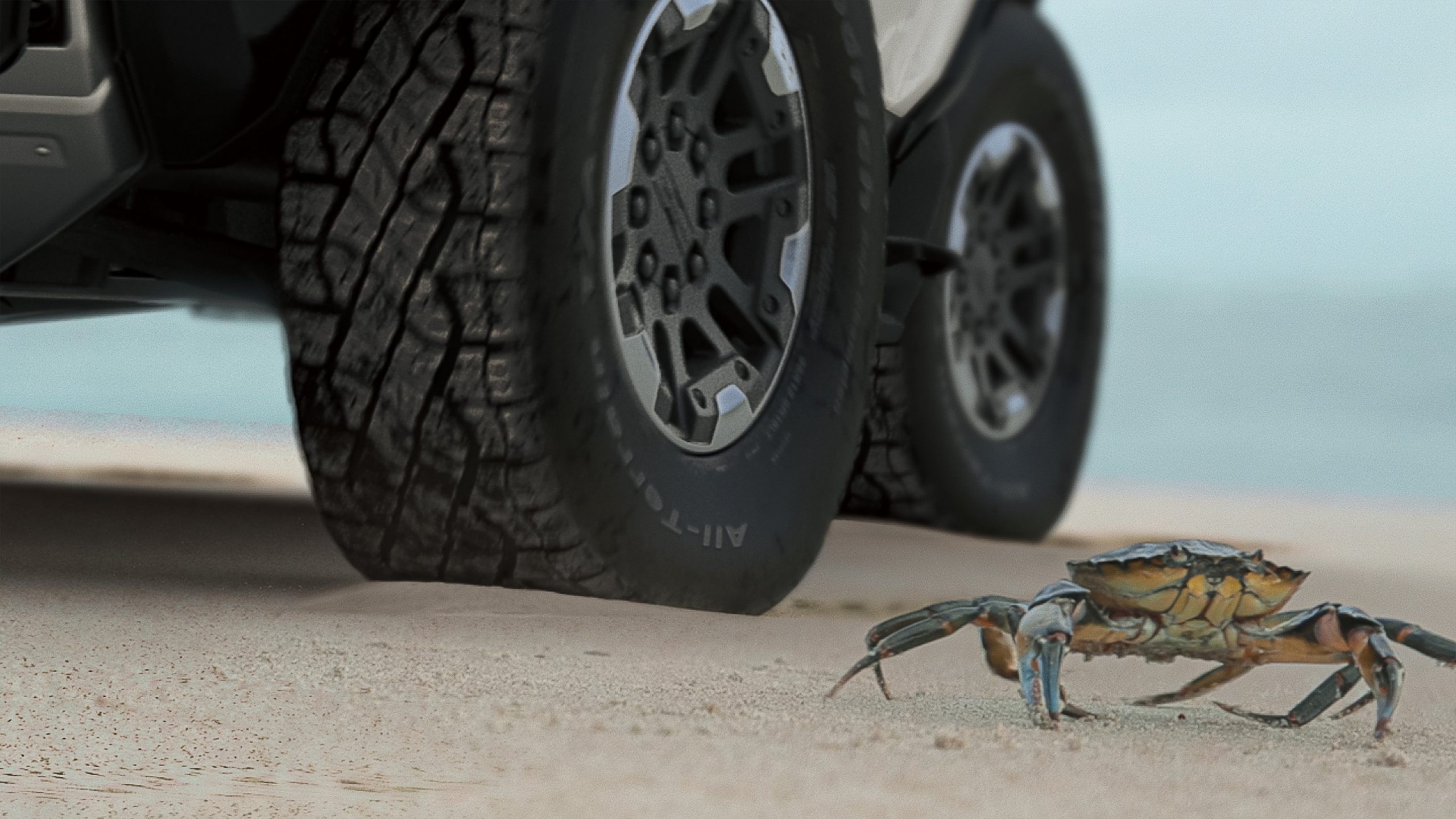