New S-Class MBUX Can Do Everything But Read Your Mind. Or Can it?

That means voice controls for back seat passengers, up to five screens, new high-tech safety features, and even more gesture controls.

While Mercedes-Benz may have first launched the new MBUX infotainment system in their entry-level model, they haven’t yet shown us just what it can do. There’s a new S-Class coming, Benz’s top dog sedan, and that will bring the new My MBUX system along with it. That means voice controls for back seat passengers, up to five screens, new high-tech safety features, and even more gesture controls.

It starts with a new and massive 12.8-inch portrait-orientation media display that allows for 27 fewer physical buttons compared with the old setup. Don’t worry if you’re not ready for all-touch, though, Mercedes-Benz shows a handful of real buttons, including a volume button, just below the big screen. For security, it can use voice and face recognition as well as fingerprint or PIN to allow access to digital payments and individual settings. The system has 50 percent more processing power, can handle over the air updates, and will give users natural voice commands in 27 languages.

The dashboard display allows a 3D display spatial view offering a three-dimensional effect without special glasses, Mercedes says. Above it are two different head-up display options, one conventional and one that uses augmented reality content like turn arrows projected onto the lane, or the distance between you and the car in front displayed to you.

On top of screens in the front, the system can be had with three in the rear. More impressively, since Mercedes knows that many S-Class owners will spend more time being driven than driving, the Hey Mercedes voice control and Interior Assist gesture control will work from the rear as well. They also have access to the same level of infotainment control as in the front. 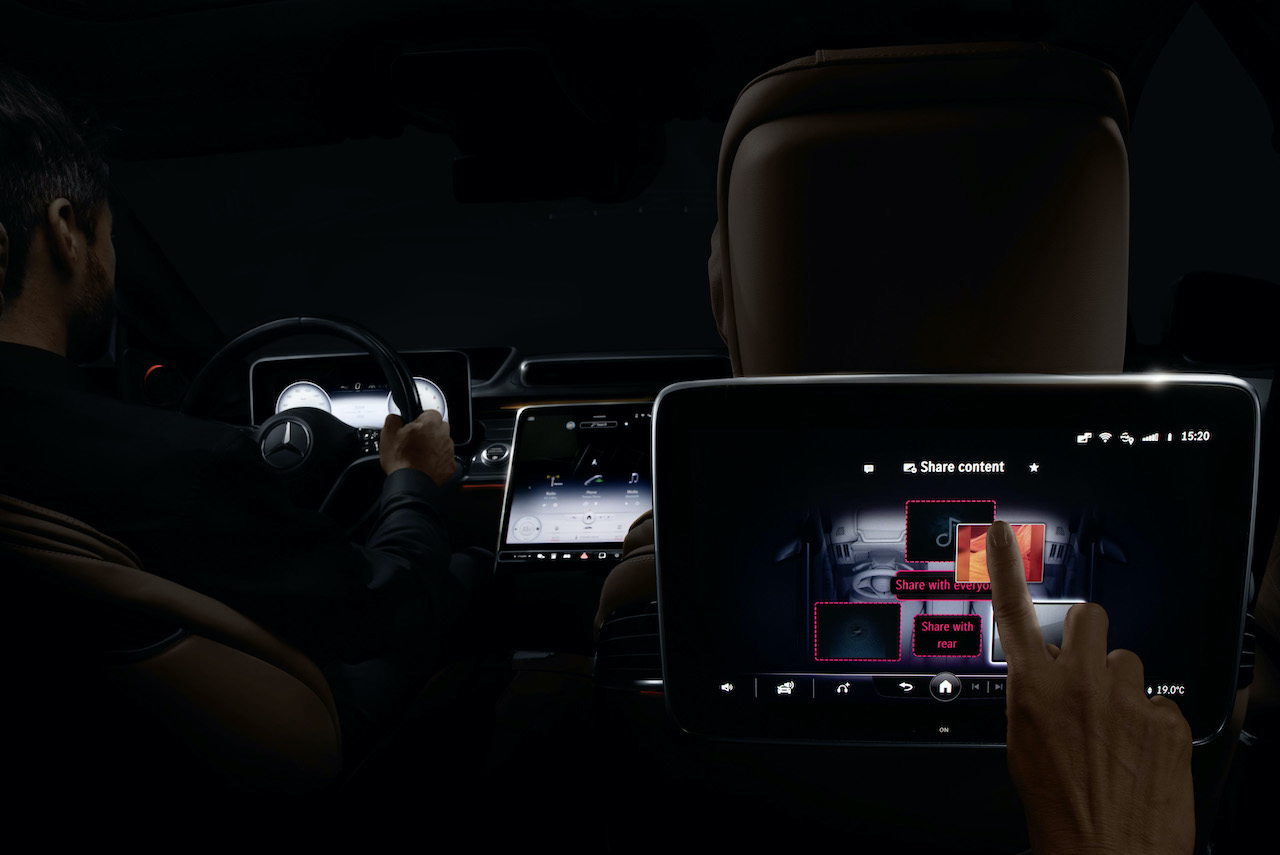 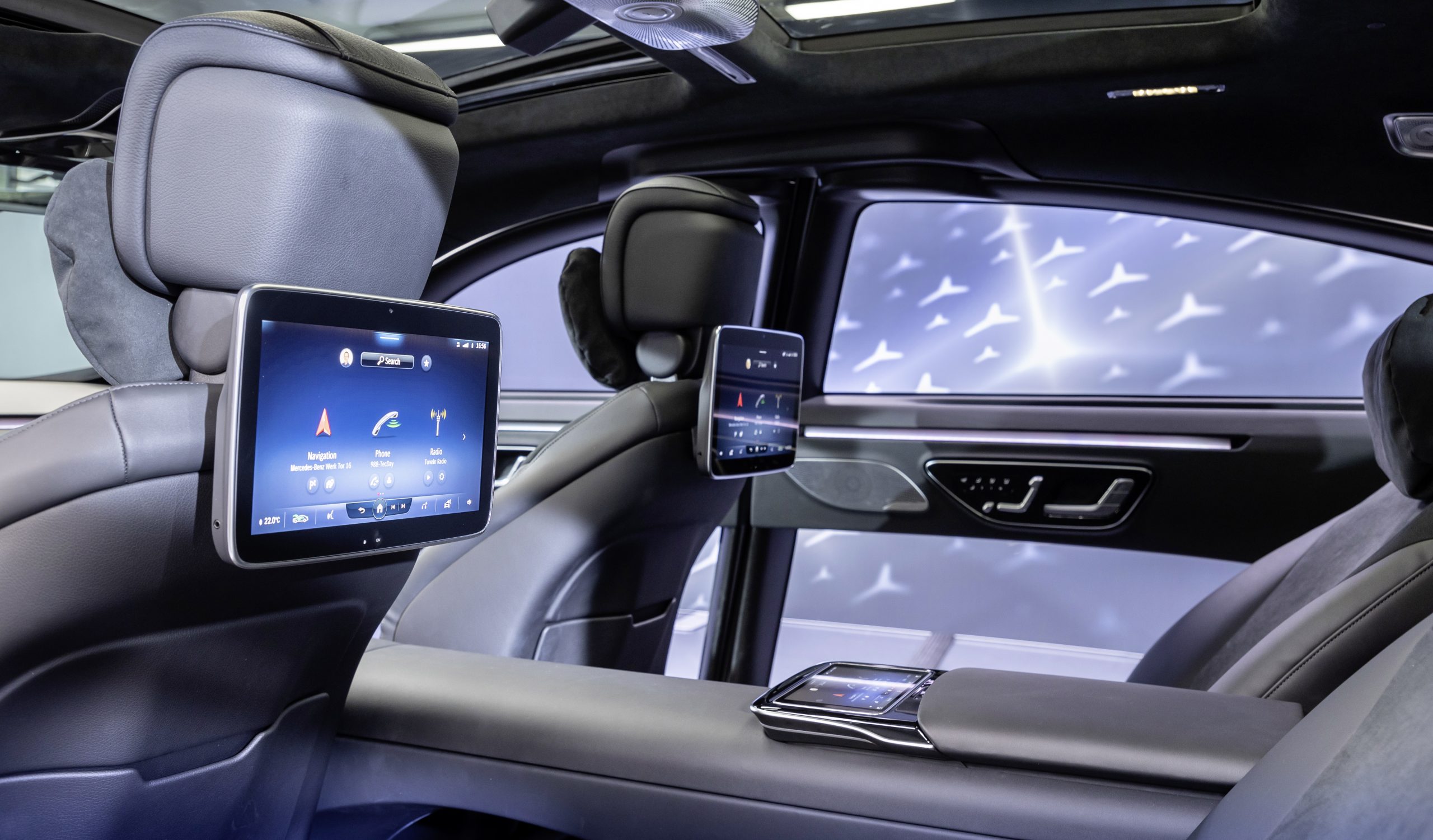 Interfacing MBUX more with the car’s other systems allows new safety features like cameras that detect an occupant wanting to get out and warning them of approaching vehicles. It can even detect if a child seat is fastened correctly to the front seat.

You’ll no longer need to say “Hey Mercedes” for controls like answering a phone call. It can tell you how to connect your smartphone, show you where to find the first-aid kit, and even control some of your smart home features. Say “I’m tired,” and the massage seats will start the Energizing comfort control program to try and help you perk up.

There are touch, swipe, talk, and even “gaze” controls, and this is where it starts to get interesting. Look at the passenger seat in the dark and the interior light will come on. Shoulder check to your right and the sunshade will retract. Waving your fingers the right way will even open the sunroof. We’re pretty sure you can just say the word and have someone from Mercedes-Benz come flying up alongside you to change the radio station presets on demand. Ok, maybe not, but they do say that “a dialogue with a real person can also be started.”

We don’t get to see the new S just yet, instead, Mercedes is showing us the new tech mounted in a futuristic pod display unit. But if you look closely at the dashboard of the pod, we’d bet that the new S-Class will look a lot like this when it is finally revealed. As for when that will be, you’ll have to try asking your MBUX assistant. 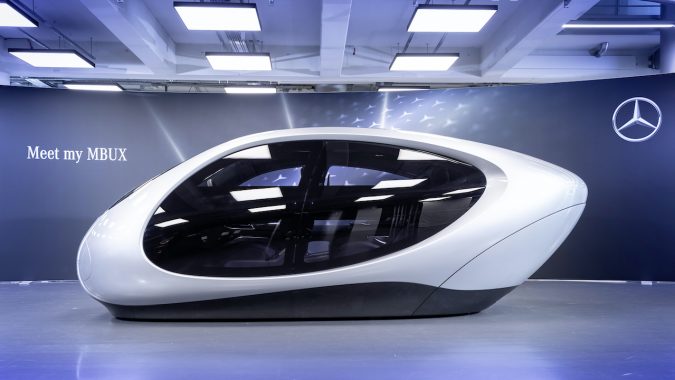 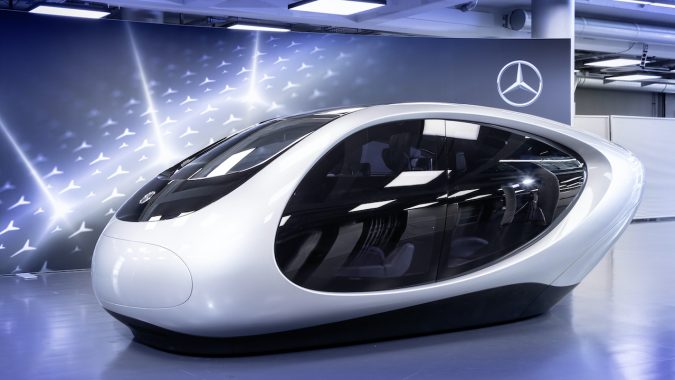 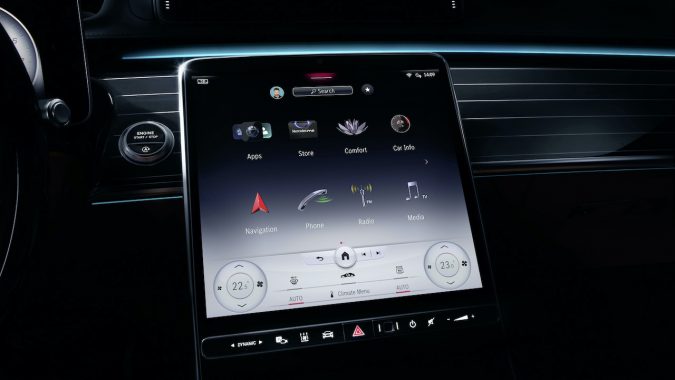 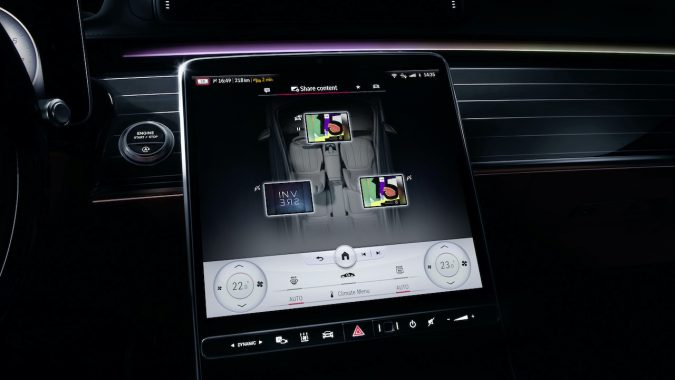 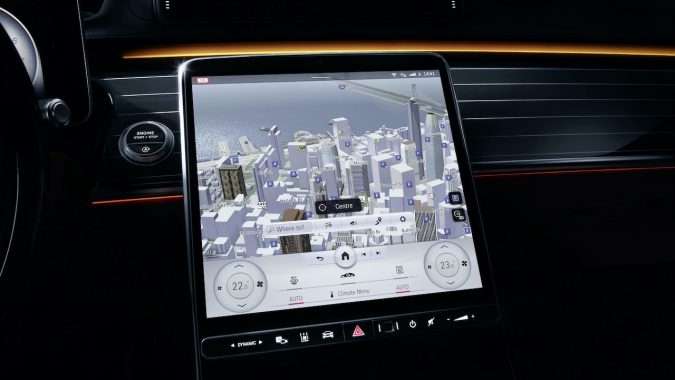 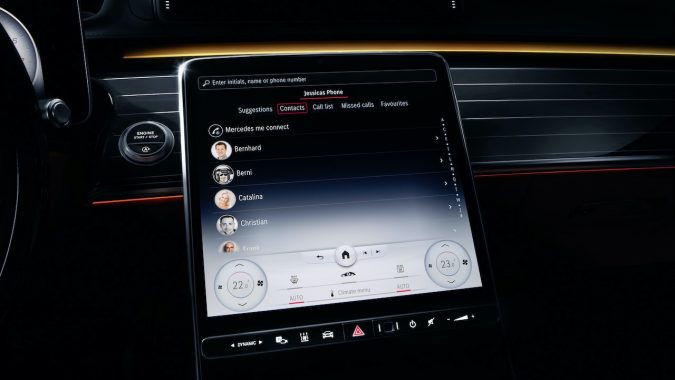 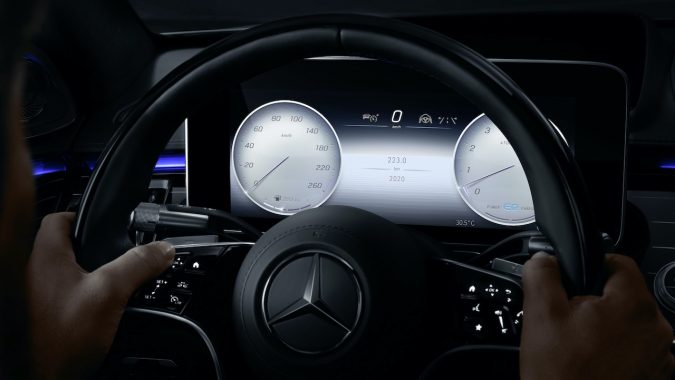 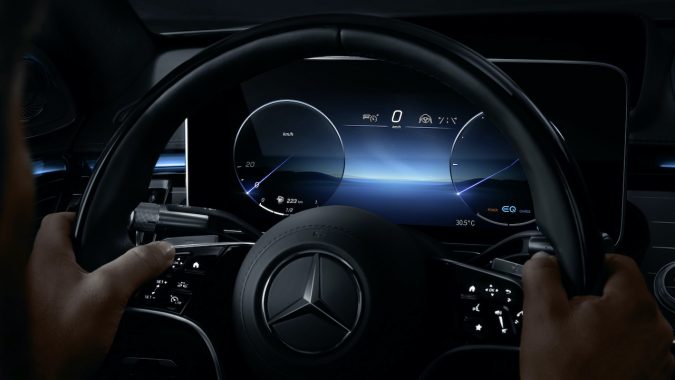 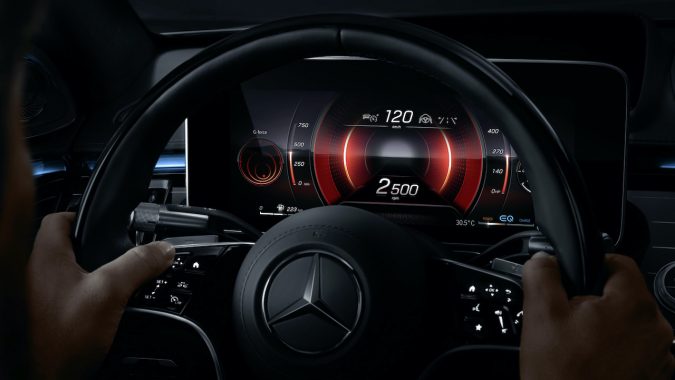 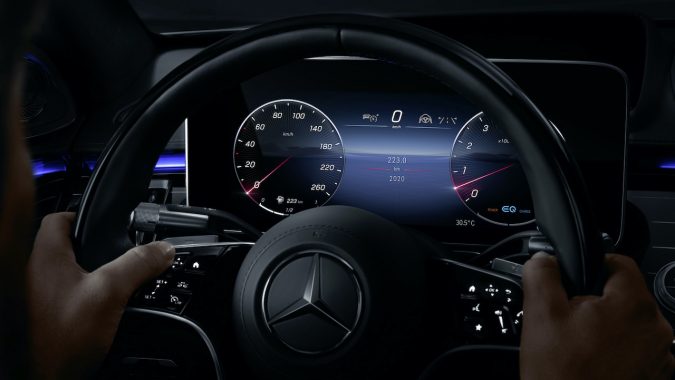 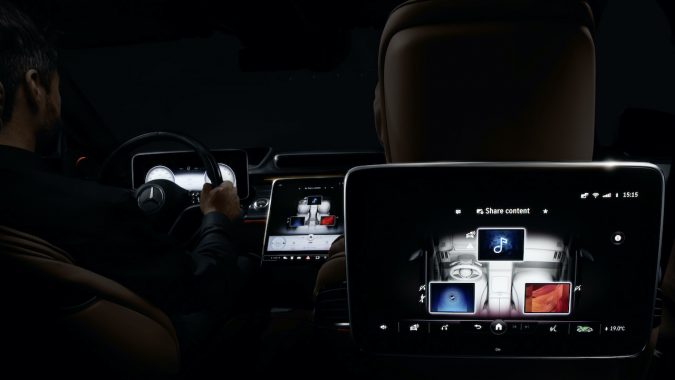 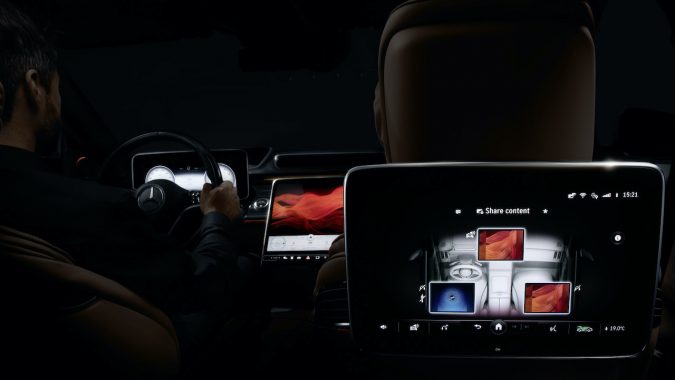 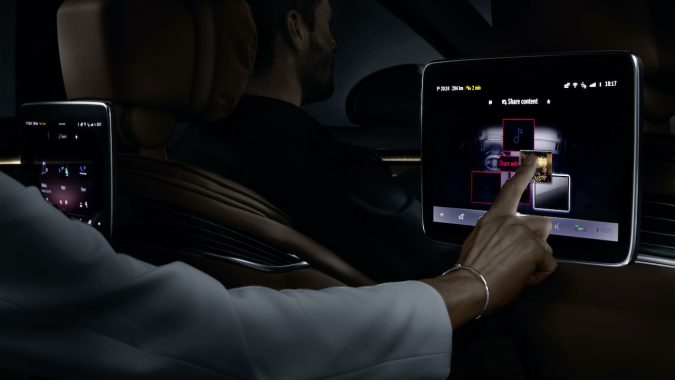 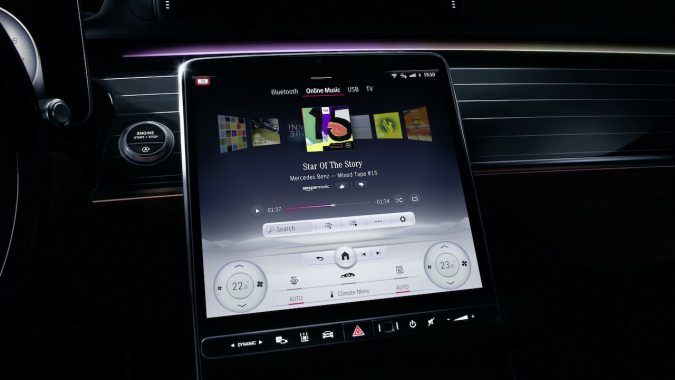 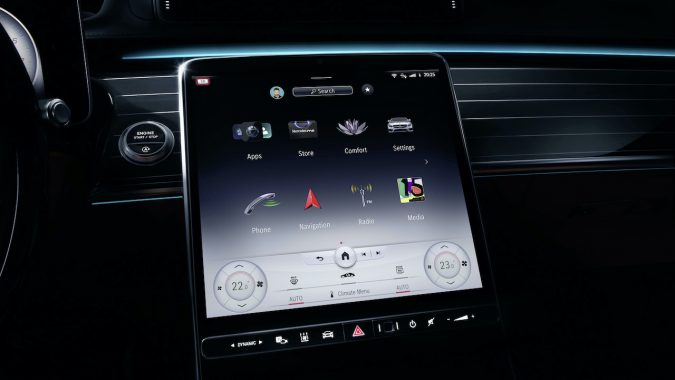